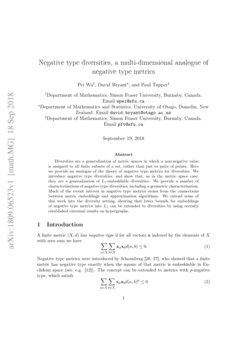 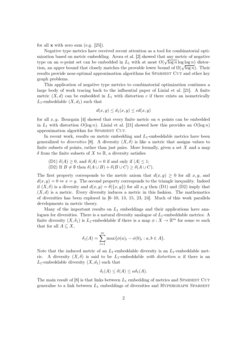 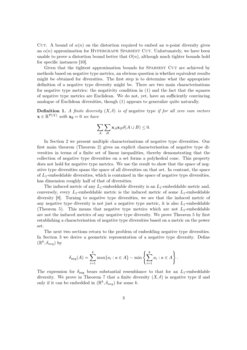 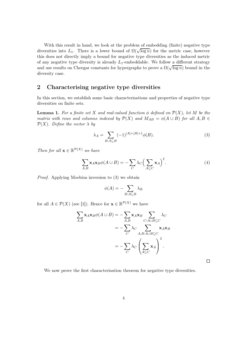 Some negative results for Neural Networks

We demonstrate some negative results for approximation of functions with...
J. M. Almira, et al. ∙

Advances in Metric Ramsey Theory and its Applications

Metrics that respect the support

In this work we explore the family of metrics determined by S-weights, i...
Roberto Assis Machado, et al. ∙

if for all vectors

Negative type metrics were introduced by Schoenberg [26, 27], who showed that a finite metric has negative type exactly when the square of that metric is embeddable in Euclidean space (see, e.g. [12]). The concept can be extended to metrics with p-negative type, which satisfy

Negative type metrics have received recent attention as a tool for combinatorial optimization based on metric embedding. Arora et al.

[2] showed that any metric of negative type on an n-point set can be embedded in L1 with at most O(√lognloglogn) distortion, an upper bound that closely matches the provable lower bound of Ω(√logn). Their results provide near-optimal approximation algorithms for Sparsest Cut and other key graph problems.

This application of negative type metrics to combinatorial optimization continues a large body of work tracing back to the influential paper of Linial et al. [21]. A finite metric (X,d) can be embedded in L1 with distortion c if there exists an isometrically L1-embeddable (X,d1) such that

for all x,y. Bourgain [4] showed that every finite metric on n points can be embedded in L1 with distortion O(logn). Linial et al. [21] showed how this provides an O(logn) approximation algorithm for Sparsest Cut.

In recent work, results on metric embedding and L1-embeddable metrics have been generalized to diversities [8]. A diversity (X,δ) is like a metric that assigns values to finite subsets of points, rather than just pairs. More formally, given a set X and a map δ from the finite subsets of X to R, a diversity satisfies

Many of the important results on L1 embeddings and their applications have analogues for diversities. There is a natural diversity analogue of L1-embeddable metrics: A finite diversity (X,δ1) is L1-embeddable if there is a map ϕ:X→Rm for some m such that for all A⊆X,

Given that the tightest approximation bounds for Sparsest Cut are achieved by methods based on negative type metrics, an obvious question is whether equivalent results might be obtained for diversities. The first step is to determine what the appropriate definition of a negative type diversity might be. There are two main characterisations for negative type metrics: the negativity condition in (1) and the fact that the squares of negative type metrics are Euclidean. We do not, yet, have an sufficiently convincing analogue of Euclidean diversities, though (1) appears to generalize quite naturally.

A finite diversity (X,δ) is of negative type if for all zero sum vectors x∈RP(X) with x∅=0 we have

The expression for δneg bears substantial resemblance to that for an L1-embeddable diversity. We prove in Theorem 7 that a finite diversity (X,δ) is negative type if and only if it can be embedded in (Rk,δneg) for some k.

In this section, we establish some basic characterisations and properties of negative type diversities on finite sets.

For a finite set X and real-valued function ϕ defined on P(X), let M be the matrix with rows and columns indexed by P(X) and MAB=ϕ(A∪B) for all A,B∈P(X). Define the vector λ by

Then for all x∈RP(X) we have

Applying Moebius inversion to (3) we obtain

Then (X,δ) is a negative type diversity if and only if λA≥0 for all A≠∅,X. Furthermore,

Suppose that (X,δ) is a negative type diversity. Fix U≠∅,X and define x by

Then, by Moebius inversion,

since U≠X. Also, x∅=0 because U≠∅. Hence by the definition of negative type diversities and Lemma 1 we have

For the converse, suppose that λA≥0 for all A≠∅,X. Suppose x is any vector in RP(X) with x∅=0 and ∑AxA=0. By Lemma 1 we have

It follows that δ is monotonic.

This, together with monotonicity, implies the triangle inequality for diversities. Hence (X,δ) is a diversity with negative type. ∎

A direct consequence of Theorem 2 is that the space of negative type diversities on a finite set X forms a polyhedral cone. This cone has dimension 2|X|−|X|−1, the same as the dimension of the cone of diversities on X.

Schoenberg’s theorem states that every negative type metric is isometric to the square of a Euclidean metric. We do not have a direct analogue of this result for diversities, however the metric result leads to an appealing property of negative type diversities.

In what follows let P0(D) be the set of all non-empty subsets of X.

Let (X,δ) be a finite diversity and let D be the symmetric real-valued function defined on P0(X)×P0(X) given by

The following are equivalent

If we look at D restricted to singletons we obtain a surprising result.

The induced metric of a negative type diversity is L1-embeddable.

Suppose (X,δ) is negative. When we restrict D to singleton sets, we see

Hence the induced metric of (X,δ) is isometric to D restricted to singletons and, by Proposition 4, D is L1-embeddable. ∎

First we show that we can restrict our attention to embeddings where all vectors have zero sum.

satisfies the condition that 1Tϕ(x)=0 for all x. For all finite A⊆Rk we have

A finite diversity (X,δ) is of negative type if and only if can be embedded in (Rk,δneg) for some k.

First we show that if X is any finite subset of Rk then (X,δneg) is of negative type. By Lemma 6 we can assume, without loss of generality, that 1Tx=0 for all x∈X.

For each A⊆X, we have

For the converse, suppose |X|=n and (X,δ) is of negative type. Let λ be given by (5), let k=2n−1 and suppose that the dimensions of Rk are indexed by nonempty subsets of X. Let ϕ:X→Rk be the map with

where we have used expression (6) in Theorem 2. ∎

Much of the recent interest in negative type metrics relates to embedding into L1 [22, 18, 16, 17, 3, 14, 19]. Every n-point negative type metric can be embedded into L1 with distortion at most O(√lognloglogn), with a lower bound of Ω(√logn) [2]. These results lead to the current best approximation bound for sparsest cut and other problems.

which is 0 unless A=X, in which case it is −1. Now suppose that A⊆C. We write λA using B=A∪D as

For the converse, suppose that the diversity δ of negative type is such that λA=λ¯¯¯¯A for all A. Let ~δ be the L1-embeddable diversity

and with ~λ given by

So δ and ~δ have the same λ vector. As the map from δ to λ is invertible, ~δ=δ and δ is L1-embeddable. ∎

(X,δH) is of negative type.

A diversity isomorphism from (X,δH) to (Rn,δneg) is given by mapping each set in X to the corresponding vector of m ones and n−m zeros. The diversity (X,δH) is then of negative type by Theorem 7. ∎

The graph J is a Johnson graph [5]. For any subset Y′⊆Y we define the vertex boundary b(Y′) by

Reversing the inequality we now obtain

Inequality (10) holds since there are ∣∣(Bm)∣∣=m+1 elements of ¯¯¯¯U contained in each B∈Ext(U), and each of these could be contained in at most m other sets B′∈Ext(U). A bound for |U| follows immediately:

The link between sparsest cuts of hypergraph and diversity embeddings was established by [8]. We make use of the same ideas.

Let k1:=k1(δH) be the minimum distortion required to embed (X,δH) into L1. Then

Define vectors c and d, indexed by P(X), by

Let δ1 be any L1-embeddable diversity such that for all A⊆X,