For high order (than two) in time operator-splitting methods applied to dissipative systems, a folklore issue is the appearance of negative-time/backward-in-time linear evolution operators such as backward heat operators interwoven with nonlinear evolutions. The stability of such methods has remained an ensuing difficult open problem. In this work we consider a fourth order operator splitting discretization for the Allen-Cahn equation which is a prototypical high order splitting method with negative time-stepping, i.e. backward in time integration for the linear parabolic part. We introduce a new theoretical framework and prove uniform energy stability and higher Sobolev stability. This is the first strong stability result for negative time stepping operator-splitting methods. 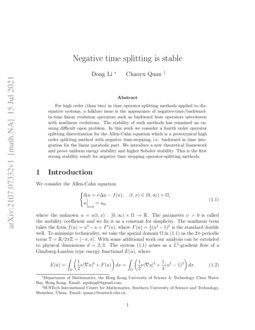 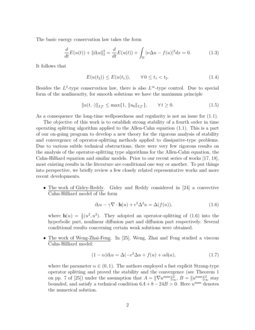 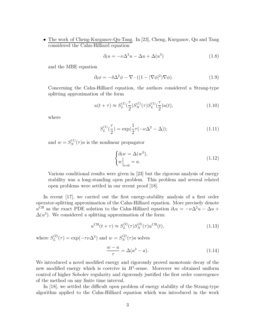 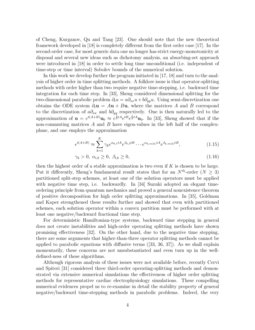 On the energy stability of Strang-splitting for Cahn-Hilliard

The operator-splitting method for Cahn-Hilliard is stable

A time discretization method is called strongly stable, if the norm of i...
Zheng Sun, et al. ∙

Uniform preconditioners of linear complexity for problems of negative order

We propose a multi-level type operator that can be used in the framework...
Rob Stevenson, et al. ∙

A posteriori learning of quasi-geostrophic turbulence parametrization: an experiment on integration steps

We consider the Allen-Cahn equation

where the unknown u=u(t,x):[0,∞)×Ω→R. The parameter ν>0 is called the mobility coefficient and we fix it as a constant for simplicity. The nonlinear term takes the form f(u)=u3−u=F′(u), where F(u)=14(u2−1)2 is the standard double well. To minimize technicality, we take the spatial domain Ω in (1.1) as the 2π-periodic torus T=R/2πZ=[−π,π]. With some additional work our analysis can be extended to physical dimensions d=2,3. The system (1.1) arises as a L2-gradient flow of a Ginzburg-Landau type energy functional E(u), where

Besides the L2-type conservation law, there is also L∞-type control. Due to special form of the nonlinearity, for smooth solutions we have the maximum principle

As a consequence the long-time wellposedness and regularity is not an issue for (1.1).

The objective of this work is to establish strong stability of a fourth order in time operating splitting algorithm applied to the Allen-Cahn equation (1.1). This is a part of our on-going program to develop a new theory for the rigorous analysis of stability and convergence of operator-splitting methods applied to dissipative-type problems. Due to various subtle technical obstructions, there were very few rigorous results on the analysis of the operator-splitting type algorithms for the Allen-Cahn equation, the Cahn-Hilliard equation and similar models. Prior to our recent series of works [17, 18], most existing results in the literature are conditional one way or another. To put things into perspective, we briefly review a few closely related representative works and more recent developments.

In [18], we settled the difficult open problem of energy stability of the Strang-type algorithm applied to the Cahn-Hilliard equation which was introduced in the work of Cheng, Kurganov, Qu and Tang [23]. One should note that the new theoretical framework developed in [18] is completely different from the first order case [17]. In the second-order case, for most generic data one no longer has strict energy-monotonicity at disposal and several new ideas such as dichotomy analysis, an absorbing-set approach were introduced in [18] in order to settle long time unconditional (i.e. independent of time-step or time interval) Sobolev bounds of the numerical solution.

In this work we develop further the program initiated in [17, 18] and turn to the analysis of higher order in time splitting methods. A folklore issue is that operator-splitting methods with order higher than two require negative time-stepping, i.e. backward time integration for each time step. In [33], Sheng considered dimensional splitting for the two-dimensional parabolic problem ∂tu=a∂xxu+b∂yyu. Using semi-discretization one obtains the ODE system ∂tu=Au+Bu, where the matrices A and B correspond to the discretization of a∂xx and b∂yy respectively. One is then naturally led to the approximation of u=et(A+B)u0≈e12tAetBe12tAu0. In [33], Sheng showed that if the non-commuting matrices A and B have eigen-values in the left half of the complex-plane, and one employs the approximation

then the highest order of a stable approximation is two even if K is chosen to be large. Put it differently, Sheng’s fundamental result states that for an Nth-order (N≥3) partitioned split-step schemes, at least one of the solution operators must be applied with negative time step, i.e. backwardly. In [34] Suzuki adopted an elegant time-ordering principle from quantum mechanics and proved a general nonexistence theorem of positive decomposition for high order splitting approximations. In [35], Goldman and Kaper strengthened these results further and showed that even with partitioned schemes, each solution operator within a convex partition must be performed with at least one negative/backward fractional time step.

For deterministic Hamiltonian-type systems, backward time stepping in general does not create instabilities and high-order operating splitting methods have shown promising effectiveness [32]. On the other hand, due to the negative time stepping, there are some arguments that higher-than-three operator splitting methods cannot be applied to parabolic equations with diffusive terms ([33, 36, 37]). As we shall explain momentarily, these concerns are not unsubstantiated and even turn up in the well-defined-ness of these algorithms.

Although rigorous analysis of these issues were not available before, recently Cervi and Spiteri [31] considered three third-order operating-splitting methods and demonstrated via extensive numerical simulations the effectiveness of higher order splitting methods for representative cardiac electrophysiology simulations. These compelling numerical evidences propel us to re-examine in detail the stability property of general negative/backward time-stepping methods in parabolic problems. Indeed, the very purpose of this work is to break these aforementioned technical barriers and establish a new stability theory for these problems.

To set the stage and minimize technicality, we consider the Allen-Cahn equation (1.1) posed on the 2π-periodic torus T=[−π,π]. To build some intuition, let τ>0 and consider

and let w=SN(τ)a solve the equation

An explicit formula for SN(τ) is readily available, indeed it is not difficult to check that

Somewhat surprisingly, we first show that the propagator S(o)4(τ) is ill-defined if one does not introduce a judiciously chosen spectral cut-off.

The propagator S(o)4(τ) is ill-defined in general.

The proof of Proposition 1.1 is given in Section 2. Armed with this important observation, we are led to introduce a spectral cut-off condition for the propagators. Let M≥2 be an integer and we shall consider the projection operator ΠM defined for f:T→R via the relation

where ˆf(k) denotes the Fourier coefficient of f. We introduce the following spectral cut-off condition.

This constraint in τ is reminiscent of the CFL condition in hyperbolic problems. Here in the parabolic setting we require that the operator τ∂xx to remain bounded when restricted to the spectral cut-off |k|≤M.

There exists a constant τ∗>0 depending only on l0, ∥a∥H1 and ν, such that if 0<τ≤τ∗, then

One can also show the fourth-order convergence of the operator splitting approximation. Namely if u0∈H80(T) and let u be the exact PDE solution corresponding to initial data a. Let 0<τ<τ∗ bet the same as in Theorem 1.1. Then for any T>0, we have

where C>0 depends on (ν, l0, ∥u0∥H80, T). The regularity assumption on initial data can be lowered. We shall refrain from stating such a pedestrian result here and leave its justification to interested readers as exercises.

The rest of this paper is organized as follows. In Section 2 we set up the notation and collect some preliminary lemmas. In Section 3 we give the proof of Theorem 1.1.

We shall denote X≪Y if X≤cY for some sufficiently small constant c. The smallness of the constant c is usually clear from the context. The notation X≫Y is similarly defined. Note that our use of ≪ and ≫ here is different

from the usual Vinogradov notation in number theory or asymptotic analysis.

If (aj)j∈I is a sequence of complex numbers and I is the index set, we denote the discrete lp-norm as

is a vector-valued function, we denote

|f|=√∑mj=1|fj|2, and ∥f∥p=∥(∑mj=1f2j)12∥p. We use similar convention for the corresponding discrete lp norms for the vector-valued case.

We use the following convention for the Fourier transform pair:

To prove Proposition 1.1, it suffices for us to examine the following statement. Consider u=e∂xxδ0 where δ0 is the periodic Dirac comb on T. Let 0<τ≪1 and consider

Proof of Claim. Observe that the Fourier coefficients of u are all positive and

Later we shall apply Lemma 3.1 n-times. In particular we need to bound the expression

Since the constant c1 depends on the Hk-norm of the iterates, it is of importance to give uniform control of the Hk-norm. To resolve this issue, we first choose A0, τ1 and c1 such that

We choose n such that

Clearly in the course of iteration, the Hk-norm of the iterates never exceeds A0. In particular

We begin by noting that for the ODE

we have the estimate (note that

It follows that for τ>0 sufficiently small,

The desired estimates then easily follows from the above using the spectral condition. ∎

where ϵ1=0.01. Clearly the operators TA, TB, TC fulfill the conditions of Lemma 3.1. The H1 estimates then follow easily from the computations outlined in Remark 3.1 with some necessary adjustment of the constants.

where ∥~f∥H1≲∥f∥H1. One can then bootstrap the higher regularity from this. We omit further details. ∎

It is not difficult to check that under the assumption of uniform high Sobolev regularity, we have (below we assume f=ΠMf)

By using Remark 3.2, it suffices for us to show

It follows that for τ>0 sufficiently small,

where c2>0 is a constant. Now we clearly have

There exists τ∗=τ∗(ν,l0,γ1)>0 sufficiently small such that if 0<τ≤τ∗, then

where the constants C(U)ν,l0, C(o)ν are the same as in Lemma 3.3. In the argument below we shall assume τ>0 is sufficiently small. The needed smallness (i.e. the existence of τ∗) can be easily worked out by fulfilling the conditions needed in Lemma 3.2, Lemma 3.3 and Lemma 3.4.

To prove the claim we argue by contradiction. Suppose n0≥c1τ is the first integer such that

which is clearly a contradiction to (3.36). Thus we have proved the claim. ∎