We present a method of training a differentiable function approximator for a regression task using negative examples. We effect this training using negative learning rates. We also show how this method can be used to perform direct policy learning in a reinforcement learning setting. 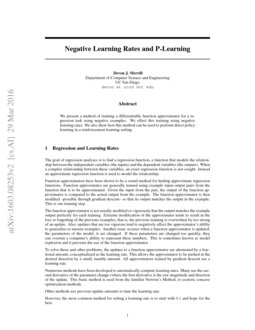 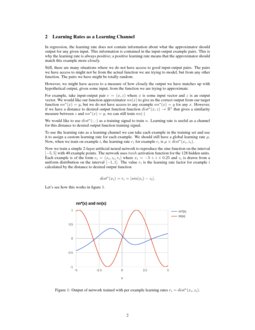 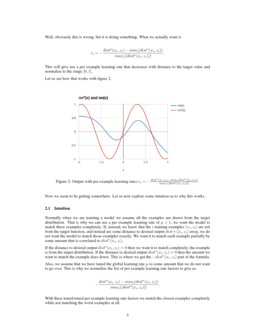 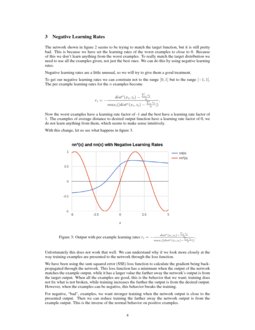 The function approximator is not usually modified so vigorously that the output matches the example output perfectly for each training. Extreme modification of the approximator tends to result in the loss or “forgetting” of the previous examples, that is, the previous training is overwritten by too strong of an update. Also, updates that are too vigorous tend to negatively affect the approximator’s ability to generalize to unseen examples. Another issue occures when a function approximator is updated, the parameters of the model, it are changed. If these parameters are changed too quickly, they can overrun a computer’s ability to represent these numbers. This is sometimes known as model explosion and it prevents the use of the function approximator.

To solve these and other problems, the updates to a function approximator are attenuated by a fractional amount, conceptualized as the learning rate. This allows the approximator to be pushed in the desired direction by a small, tunable amount. All approximators trained by gradient descent use a learning rate.

Numerous methods have been developed to automatically compute learning rates. Many use the second derivative of the parameter change (where the first derivative is the raw magnitude and direction of the update. This basic method is used from the familiar Newton’s Method, to esoteric concave optimization methods.

Other methods use previous update amounts to tune the learning rate.

However, the most common method for setting a learning rate is to start with 0.1 and hope for the best.

2 Learning Rates as a Learning Channel

However, we might have access to a measure of how closely the output we have matches up with hypothetical output, given some input, from the function we are trying to approximate.

is some input vector and

z is an output vector. We would like our function approximator nn(x) to give us the correct output from our target function nn∗(x)=y, but we do not have access to any example nn∗(x)=y for any x. However, if we have a distance to desired output function function dist∗(x,z)→R1 that gives a similarity measure between z and nn∗(x)=y, we can still train nn(⋅)

We would like to use dist∗(⋅,⋅) as a training signal to train n. Learning rate is useful as a channel for this distance to desired output function training signal.

is drawn from a uniform distribution on the interval

[−1,1]. The value ri is the learning rate factor for example i calculated by the distance to desired output function

Let’s see how this works in figure 1.

Well, obviously this is wrong, but it is doing something. What we actually want is

This will give use a per example learning rate that decreases with distance to the target value and normalize to the range [0,1].

Let us see how that works with figure 2.

Now we seem to be getting somewhere. Let us now explore some intuition as to why this works.

Normally when we are training a model we assume all the examples are drawn from the target distribution. That is why we can use a per example learning rate of μ×1, we want the model to match these examples completely. If, instead, we know that the i training examples (xi,zi) are not from the target function, and instead are some distance to desired output dist∗(xi,zi) away, we do not want the model to match those examples exactly. We want it to match each example partially by some amount that is correlated to dist∗(xi,zi).

Also, we assume that we have tuned the global learning rate μ to some amount that we do not want to go over. This is why we normalize the list of per example learning rate factors to give us

With these transformed per example learning rate factors we match the closest examples completely while not matching the worst examples at all.

The network shown in figure 2 seems to be trying to match the target function, but it is still pretty bad. This is because we have set the learning rates of the worst examples to close to 0. Because of this we don’t learn anything from the worst examples. To really match the target distribution we need to use all the examples given, not just the best ones. We can do this by using negative learning rates.

Negative learning rates are a little unusual, so we will try to give them a good treatment.

With this change, let us see what happens in figure 3.

Unfortunately this does not work that well. We can understand why if we look more closely at the way training examples are presented to the network through the loss function.

We have been using the sum squared error (SSE) loss function to calculate the gradient being backpropagated through the network. This loss function has a minimum when the output of the network matches the example output, while it has a larger value the farther away the network’s output is from the target output. When all the examples are good, this is the behavior that we want; training does not fix what is not broken, while training increases the further the output is from the desired output. However, when the examples can be negative, this behavior breaks the training.

To fix this problem we can replace the incoming gradient g to the network with 1/g when the learning rate is negative. This is equivalent to using a modified per example loss function which takes an additional parameter ri:

The output of our network with this training scheme is shown in figure 4.

4 What We Are Really Doing

If we have a model of the environment, we can simulate what will happen when we take a particular action in a given state. Then we can explore the model and search for the action that increases the probability of getting rewards. For example, if the learner is playing checkers the learner can simulate thousands of possible games and choose the move that leads to the most winning games. This approach has recently been used to master the game of Go.[2]

Another approach finds the function Q(s,a) where s is the current state and a is an action. The function Q(s,a) gives the expected value of the state-action pair. The learner can then find the action that maximizes Q. This is aptly called q-learning. Q-learning has been recently used to master several simple video games.[1]

Our method has several features that distinguish it from other reinforcement learning methods. First, there is no model of the environment. We do not need to simulate the outcome of actions. This method is totally “online”. Secondly, we do not need to perform any policy evaluation. This is rather unusual.

Instead of learning the environment or the q-values, we directly learn a policy. Because q-learning learns q-values, and our methods learns a policy let us call it p-learning.

4.1 How to Use P-Learning as Reinforcement Learning

The reinforcement learning paradigm is that the agent receives the state of the environment s. It may then take action a, and receive reward r. The agent’s goal at time t0 is to maximize the total discounted future rewards ∑tγt−t0rt with some discount factor γ∈[0,1].

When we receive an experience at time t0 where rt0>0 we replace each other experience’s reward as rt←rt+γt0−trt0. We can stop the reward propagation when we know that the previous states did not affect the current state being updated. This might happen if we know that a state was at the start of a game in a string of games. We should not propagate rewards across games.

After reward propagation, construct a set of training examples where each example et corresponds to the experience at time t. Each example looks like

Please note that actions that received average rewards have a very low learning rate. These can be safely dropped from the training set. When the environment leads to many rewards of close to average value, this can speed up training significantly. For example, if the agent plays many games that end in a draw while winning and losing an equal number of games, we can simple ignore all the draw games. We can do this by removing all experiences from the training dataset where the reward for that experience is within some small value of the mean of all the rewards from all experiences.

We have tested p-learners in simple “mouse and cliff” games, where the agent must move on a checkers board from a start tile to a goal tile while avoiding hazard tiles. P-learners learn comparable policies, in the same number of games, as q-learners where the Q function is approximated by a neural network with the same architecture as the p-learner’s policy net.

In this paper we have shown how to use negative examples to train function approximates in regression tasks. We have also shown how to use negative learning rates to effect this training. We also have introduced a method of reinforcement learning, p-learning, that directly learns a good policy without learning either an environment model or doing any policy evaluation.

Thank you for reading :)