In this paper, we discuss necessary and sufficient explanations for formal argumentation - the question whether and why a certain argument can be accepted (or not) under various extension-based semantics. Given a framework with which explanations for argumentation-based conclusions can be derived, we study necessity and sufficiency: what (sets of) arguments are necessary or sufficient for the (non-)acceptance of an argument? 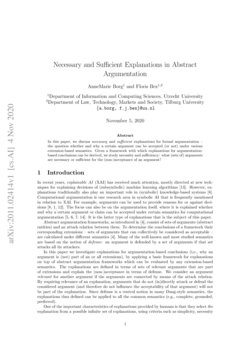 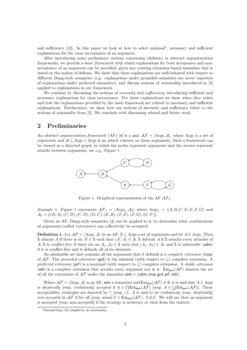 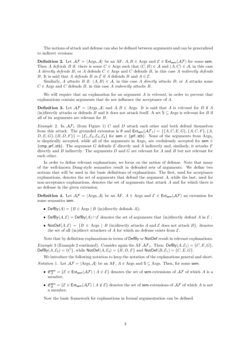 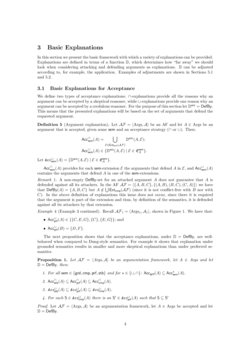 In this paper, we present a learning-based approach to determining accep...
Dennis Craandijk, et al. ∙

The study of arguments as abstract entities and their interaction as int...
Eun Jung Kim, et al. ∙

We investigate an approach to reasoning about causes through argumentati...
Philippe Besnard, et al. ∙

This work is about making decisions by digital means. Funds should be di...
Björn Ebbinghaus, et al. ∙

Given a set of conflicting arguments, there can exist multiple plausible...
Edmond Awad, et al. ∙

[13]. However, explanations traditionally also play an important role in (symbolic) knowledge-based systems [8]. Computational argumentation is one research area in symbolic AI that is frequently mentioned in relation to XAI. For example, arguments can be used to provide reasons for or against decisions [8, 1, 12]. The focus can also be on the argumentation itself, where it is explained whether and why a certain argument or claim can be accepted under certain semantics for computational argumentation [5, 6, 7, 14]. It is the latter type of explanations that is the subject of this paper.

Abstract argumentation frameworks, as introduced in [4], consist of sets of arguments (abstract entities) and an attack relation between them. To determine the conclusions of a framework their corresponding extensions – sets of arguments that can collectively be considered as acceptable – are calculated under different semantics [4]. Many of the well-known and most studied semantics are based on the notion of defense: an argument is defended by a set of arguments if that set attacks all its attackers.

In this paper we investigate explanations for argumentation-based conclusions (i.e., why an argument is (not) part of an or all extensions), by applying a basic framework for explanations on top of abstract argumentation frameworks which can be evaluated by any extension-based semantics. The explanations are defined in terms of sets of relevant arguments that are part of extensions and explain the (non-)acceptance in terms of defense. We consider an argument relevant for another argument if the arguments are connected by means of the attack relation. By requiring relevance of an explanation, arguments that do not (in)directly attack or defend the considered argument (and therefore do not influence the acceptability of that argument) will not be part of the explanation. Since defense is a central notion in many Dung-style semantics, the explanations thus defined can be applied to all the common semantics (e.g., complete, grounded, preferred).

After introducing some preliminary notions concerning (defense) in abstract argumentation frameworks, we provide a basic framework with which explanations for both acceptance and non-acceptance of an argument can be provided, given any existing extension-based semantics that is based on the notion of defense. We show that these explanations are well-behaved with respect to different Dung-style semantics (e.g. explanations under grounded semantics are never supersets of explanations under preferred semantics), and discuss notions of minimality introduced in [5] applied to explanations in our framework.

An abstract argumentation framework (AF) [4] is a pair \calAF=\tuple\Args,\attack, where \Args is a set of arguments and \attack⊆\Args×\Args is an attack relation on these arguments. Such a framework can be viewed as a directed graph, in which the nodes represent arguments and the arrows represent attacks between arguments, see e.g., Figure 1.

Given an AF, Dung-style semantics [4] can be applied to it, to determine what combinations of arguments (called extensions) can collectively be accepted.

Let \calAF=\tuple\Args,\attack be an AF, \sfS⊆\Args a set of arguments and let A∈\Args. Then \sfS attacks A if there is an A′∈\sfS such that (A′,A)∈\attack; \sfS defends A if \sfS attacks every attacker of A; \sfS is conflict-free if there are no A1,A2∈\sfS such that (A1,A2)∈\attack; and \sfS is admissible (\adm) if it is conflict-free and it defends all of its elements.

The notions of attack and defense can also be defined between arguments and can be generalized to indirect versions:

We will require that an explanation for an argument A is relevant, in order to prevent that explanations contain arguments that do not influence the acceptance of A.

Note that by definition explanations in terms of \DefBy or \NotDef result in relevant explanations.

We introduce the following notation to keep the notation of the explanations general and short.

Now the basic framework for explanations in formal argumentation can be defined.

In this section we present the basic framework with which a variety of explanations can be provided. Explanations are defined in terms of a function 0pt, which determines how “far away” we should look when considering attacking and defending arguments as explanations. 0pt can be adjusted according to, for example, the application. Examples of adjustments are shown in Sections 5.1 and 5.2.

Let \calAF=\tuple\Args,\attack be an AF and let A∈\Args be an argument that is accepted, given some \sem and an acceptance strategy (∩ or ∪). Then:

Recall \calAF1=\tuple\Args1,\attack1, shown in Figure 1. We have that:

The next proposition shows that the acceptance explanations, under 0pt=\DefBy, are well-behaved when compared to Dung-style semantics. For example it shows that explanation under grounded semantics results in smaller and more skeptical explanations than under preferred semantics.

Understanding why something is not accepted might sometimes be just as important as understanding why something is accepted. We therefore discuss basic definitions for explanations of non-accepted arguments. Since we focus on the notion of defense and admissibility-based semantics, an argument is not accepted if it is attacked and there is no defense for this attack by an accepted argument. In this section, let 0pt\nacc=\NotDef.

Let \calAF=\tuple\Args,\attack be an AF and let A∈\Args be an argument that is not accepted, given some \sem and some ⋆∈{∩,∪}.

(Example 3 continued) Recall the argumentation framework from Example 1, shown in Figure 1. Then:

These notions of minimality are already useful in restricting the size of an explanation. As we have seen in the example above, if \mima=min⊆ \Acc∪\prf(A)∈{{C},{E,G}}. It is therefore no longer the case that \Acc∪\prf(A) could be {C,E,G} when considering minimal explanations. However, these notions do not say anything about necessity, sufficiency or even relevance. In the next section we therefore look further into restricting the size of explanations, this time based on relevance, sufficiency and necessity.

Necessity and sufficiency in the context of philosophy and cognitive science are discussed in, for example,  [10, 11, 15]. Intuitively, an event Γ is sufficient for Δ if no other causes are required for Δ to happen, while Γ is necessary for Δ, if in order for Δ to happen, Γ has to happen as well. In the context of logical implication (denoted by →), one could model sufficiency by Γ→Δ and necessity by Δ→Γ [9]. In the next sections we formulate these logical notions in our argumentation setting.

5.1 Necessity and Sufficiency for Acceptance

In \calAF1 both {C} and {E} are sufficient for the acceptance of A but neither is necessary, while for E, {G} is both sufficient and necessary.

In order to use the above notions as variations of 0pt, we introduce:333\Suff and \Nec are defined for an argument and the empty set. We do so because 0pt requires an argument and an extension.

When 0pt∈{\Suff,\Nec}, \Acc⋆\sem is the same for any semantics \sem. This is the case since the definition of sufficiency and necessity is not defined w.r.t. \sem.

For \calAF1 we have that \Acc∪\sem(B)∈{{D,F},{B,D,F}} for 0pt=\Suff and \Acc∪\sem(B)={D,F} for 0pt=\Nec. This means that the credulous acceptance of B can be explained by the existence of the arguments D and F, which are both sufficient and necessary for B to be accepted.

Next we show some useful properties of sufficient and necessary (sets of) arguments for acceptance. In particular, we show that the sets in \Suff(A,∅) are admissible and contain all the needed arguments. We further look at conditions under which \Suff and \Nec are empty, as well as the relation between \Suff and \Nec.

The next proposition relates the introduced notions of necessity and sufficiency with 0pt=\DefBy. This shows that, although \DefBy is only one of many options for 0pt, it is closely related with these selection criteria and therefore a useful notion from which to start the investigation into explanations within the basic framework.

Let \calAF=\tuple\Args,\attack be an AF and let A∈\Args be an argument that is accepted w.r.t. \sem and ⋆∈{∩,∪}. Consider both items.

5.2 Necessity and Sufficiency for Non-Acceptance

In order to define sufficiency for non-acceptance we need the following definition.

For \calAF1 from Example 1 we have that the indirect attack from G on B is uncontested. This follows since E is not attacked and hence, when G is accepted, so is E. Therefore, both E and G can be seen as sufficient for the non-acceptance of B. However, the attacks from D and F on A are contested in B. For D this follows since it defends B, but B is attacked by E and, similarly, F defends B, but B is attacked by C. Hence, although D and F indirectly attack A, by just accepting one, A is not necessarily non-accepted, therefore neither would be sufficient on its own to make A non-accepted.

Let \calAF=\tuple\Args,\attack be an AF and let A∈\Args. Then \calAF↓A=⟨\Args∖{A},\attack∩(\Args∖{A}×\Args∖{A})⟩ denotes the AF based on \calAF but without A.

Since indirect attacks might be sufficient for not accepting an argument, but they also might be contested, the definition of sufficiency for non-acceptance is defined inductively.

We define the following notation, to use the above notions as variations of 0pt:

For \calAF1 we have that \NotAcc∩\prf(B)∈{{C},\allowbreak{E},\allowbreak{G},\allowbreak{C,E},\allowbreak{C,G},{E,G},{C,E,G}}555The explanation could contain other arguments as well (e.g., the explanation could be {A,C,D,E,G}). This is the case since \sfS∈\Suff(B,∅) is not assumed to be minimal. for 0pt=\SuffNot while \NotAcc∩\prf(B)=∅ for 0pt=\NecNot. This means that the skeptical non-acceptance of B can be explained by the existence of the arguments C, E and G, which are all sufficient for the non-acceptance of B but none of them is necessary.

Now we show how 0pt=\NotDef is related to the here introduced notions of sufficiency and necessity for non-acceptance. For this we first need the following lemma:666For \sem=\grd this lemma was shown in [3].

In order to compare the introduced notions of necessity and sufficiency with the notions of minimality known from [5] and recalled in Section 4, we define minimal sufficient sets, where ⪯∈{⊆,≤}: