In this paper, we focus on 1-bit precoding for large-scale antenna systems in the downlink based on the concept of constructive interference (CI). By formulating the optimization problem that aims to maximize the CI effect subject to the 1-bit constraint on the transmit signals, we mathematically prove that, when relaxing the 1-bit constraint, the majority of the obtained transmit signals already satisfy the 1-bit constraint. Based on this important observation, we propose a 1-bit precoding method via a partial branch-and-bound (P-BB) approach, where the BB procedure is only performed for the entries that do not comply with the 1-bit constraint. The proposed P-BB enables the use of the BB framework in large-scale antenna scenarios, which was not applicable due to its prohibitive complexity. Numerical results demonstrate a near-optimal error rate performance for the proposed 1-bit precoding algorithm. 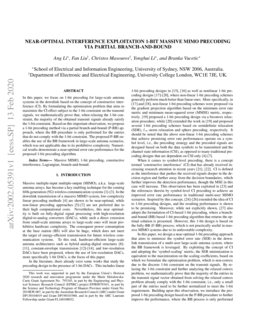 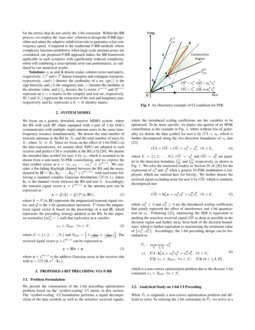 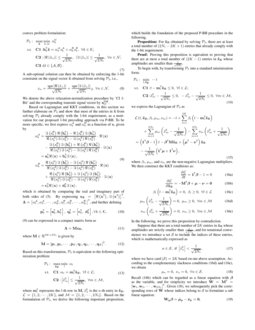 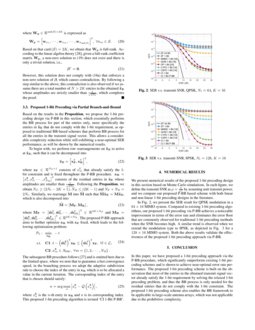 In this paper, we focus on the multiuser massive multiple-input single-o...
Ang Li, et al. ∙

In this paper, we consider the one-bit precoding problem for the multius...
zheyu-wu, et al. ∙

Massive multiple-input multiple-output (MIMO), a.k.a. large-scale antenna arrays, has become a key enabling technique for the coming fifth-generation (5G) wireless communication systems [1]-[3]. In the downlink transmission of a massive MIMO system, low-complexity linear precoding methods [4] are shown to be near-optimal, while non-linear precoding approaches [5]-[7] are not preferred due to their high computational costs. Nevertheless, this near optimality is built on fully-digital signal processing with high-resolution digital-to-analog converters (DACs), while such a direct extension from small-scale antenna arrays to large-scale ones will incur prohibitive hardware complexity. The consequent power consumption at the base station (BS) will also be huge, which does not meet the target of energy-efficient transmission for future wireless communication systems. To this end, hardware-efficient large-scale antenna architectures such as hybrid analog-digital structures [8]-[11], constant-envelope transmission [12]-[14], and low-resolution DACs have been proposed, where the use of low-resolution DACs, more specifically 1-bit DACs, is the focus of this paper.

When it comes to symbol-level precoding, there is a concept termed ‘constructive interference’ (CI) that has already received increasing research attention in recent years [21], [22]. CI is defined as the interference that pushes the received signals deeper in the decision region and farther away from the decision boundaries, which further improves the detection performance, though the MSE in this case will increase. This observation has been exploited in [23] and the references therein by symbol-level CI precoding to achieve an improved error rate performance in traditional multi-user MIMO scenarios. Inspired by this concept, [24]-[26] extended the idea of CI to 1-bit precoding designs, and the resulting performance is shown to be promising. Moreover, while not explicitly shown, [27] also adopts the formulation of CI-based 1-bit precoding, where a branch-and-bound (BB) based 1-bit precoding algorithm that returns the optimal solution is presented. However, this 1-bit design is based on the fully-BB (F-BB) process, which is not practically useful in massive MIMO systems due to its unfavorable complexity.

In this paper, we design a near-optimal 1-bit precoding approach that aims to minimize the symbol error rate (SER) in the downlink transmission of a multi-user large-scale antenna system, where the BB framework is leveraged. By exploiting the concept of CI and adopting the ‘symbol-scaling’ metric, the SER minimization is equivalent to the maximization on the scaling coefficients, based on which we formulate the optimization problem, which is non-convex due to the discrete 1-bit constraint on the transmit signals. By relaxing the 1-bit constraint and further analyzing the relaxed convex problem, we mathematically prove that the majority of the entries in the transmit signal vector obtained from solving the relaxed convex problem already comply with the 1-bit constraint, i.e., only a small part of the entries need to be further normalized to meet the 1-bit requirement. Building upon this observation, we introduce the proposed 1-bit precoding design based on the P-BB procedure to further improve the performance, where the BB process is only performed for the entries that do not satisfy the 1-bit constraint. Within the BB process, we employ the ‘max-min’ criterion to design the P-BB algorithm and adopt the adaptive subdivision rule to guarantee a fast convergence speed. Compared to the traditional F-BB methods whose complexity becomes prohibitive when large-scale antenna arrays are considered, our proposed P-BB approach makes the BB framework applicable in such scenarios with significantly reduced complexity, while still exhibiting a near-optimal error rate performance, as validated by our numerical results.

We focus on a generic downlink massive MIMO system, where the BS with each RF chain equipped with a pair of 1-bit DACs communicates with multiple single-antenna users in the same time-frequency resource simultaneously. We denote the total number of transmit antennas at the BS by Nt and the total number of users by K, where Nt≫K. Since we focus on the effect of 1-bit DACs on the data transmission, we assume ideal ADCs are adopted at each receiver and perfect CSI is available at the BS [15]-[20]. We denote the intended data symbol for user k by sk, which is assumed to be drawn from a unit-norm M-PSK constellation, and we express the data symbol vector as s=[s1,s2,⋯,sK]T∈CK×1. We consider a flat-fading Rayleigh channel between the BS and the users, denoted by H=[h1,h2,⋯,hK]T∈CK×Nt

, with each entry following a standard complex Gaussian distribution

CN(0,1), where hk is the channel vector between the BS and user k. Accordingly, the transmit signal vector x∈CNt×1 at the antenna port can be expressed as

where n∈CK×1 is the additive Gaussian noise at the receiver side with n∼CN(0,σ2⋅IK).

We present the construction of the 1-bit precoding optimization problem based on the ‘symbol-scaling’ CI metric in this section. The ‘symbol-scaling’ CI formulation performs a signal decomposition of the data symbols as well as the noiseless received signals, where the introduced scaling coefficients are the variables to be optimized. To be more specific, we depict one quarter of an 8PSK constellation as the example in Fig. 1, where without loss of generality we denote the data symbol for user k by →OA=sk, which is further decomposed along the two detection boundaries of sk into [23]

where K={1,2,⋯,K}, →OF=sAk and →OG=sBk are parallel to the detection boundary l(1)TH and l(2)TH respectively, as shown in Fig. 1. We refer the interested readers to Section IV of [26] for the expression of sAk and sBk when a generic M-PSK modulation is employed, which are omitted here for brevity. We further denote the received signal excluding noise for user k by →OB, which is similarly decomposed into

where αAk≥0 and αBk≥0 are the introduced scaling coefficients that jointly represent the effect of interference and 1-bit quantization on sk. Following [23], minimizing the SER is equivalent to pushing the noiseless received signal →OB as deep as possible in the decision region and farther away from both of the decision boundaries, which is further equivalent to maximizing the minimum value of {αAk,αBk}. Accordingly, the 1-bit precoding design can be formulated as

which is a non-convex optimization problem due to the discrete 1-bit constraint xn∈XDAC, ∀n∈N.

While P1 is originally a non-convex optimization problem and difficult to solve, by relaxing the 1-bit constraints in P1, we arrive at a convex problem formulation:

A sub-optimal solution can then be obtained by enforcing the 1-bit constraint on the signal vector ~x obtained from solving P2, i.e.,

We denote the above relaxation-normalization procedure by ‘CI 1-Bit’ and the corresponding transmit signal vector by xPSKCI.

Based on Lagrangian and KKT conditions, in this section we further elaborate on P2 and show that most of the entries in ~x from solving P2 already comply with the 1-bit requirement, as a motivation for our proposed 1-bit precoding approach via P-BB. To be more specific, we first express αAk and αBk as a function of x, given by

which is obtained by comparing the real and imaginary part of both sides of (5). By expressing xE=[R(xT),I(xT)]T, Λ=[αA1,αA2,⋯,αAK,αB1,αB2,⋯,αBK]T, and further defining

(9) can be expressed in a compact matrix form as

where M∈R2K×2Nt is given by

Based on this transformation, P2 is equivalent to the following optimization problem:

where mTl represents the l-th row in M, ~xEn is the n-th entry in ~xE, L={1,2,⋯,2K}, and M={1,2,⋯,2Nt}. Based on the formulation of P3, we derive the following important proposition, which builds the foundation of the proposed P-BB procedure in the following.

Proposition: For ~xE obtained by solving P3, there are at least a total number of (2Nt−2K+1) entries that already comply with the 1-bit requirement.

Proof: Proving this proposition is equivalent to proving that there are at most a total number of (2K−1) entries in ~xE whose amplitudes are smaller than 1√2Nt.

To begin with, by transforming P3 into a standard minimization form:

we express the Lagrangian of P4 as

Suppose that there are a total number of 2K entries in ~xE whose amplitudes are strictly smaller than 1√2Nt, and for notational convenience we introduce a set S to include the indices of these entries, which is mathematically expressed as

where we have card(S)=2K based on our above assumption. According to the complementary slackness conditions (15) and (15), we obtain

Recall (15) which can be regarded as a linear equation with β as the variable, and for simplicity we introduce W=MT=[w1,w2,⋯,w2Nt]T. Given (17), we subsequently pick the corresponding rows of W whose indices belong to S to formulate a sub linear equation:

where Wp∈Rcard(S)×2K is expressed as

Based on that card(S)=2K, we obtain that Wp is full-rank. According to the linear algebra theory [28], given a full-rank coefficient matrix Wp, a non-zero solution to (18) does not exist and there is only a trivial solution, i.e.,

However, this solution does not comply with (15) that enforces a non-zero solution of β, which causes contradiction. By following a step similar to the above, this contradiction is also observed if we assume there are a total number of N>2K entries in the obtained ~xE whose amplitudes are strictly smaller than 1√2Nt, which completes the proof.■

Based on the results in the Proposition, we propose the 1-bit precoding design via P-BB in this section, which essentially performs the BB process for part of the entries only, more specifically the entries in ~xE that do not comply with the 1-bit requirement, as opposed to traditional BB-based schemes that perform BB process for all the entries in the transmit signal vector. This allows a considerable complexity reduction while still exhibiting a near-optimal SER performance, as will be shown by the numerical results.

To begin with, we perform row rearrangements on ~xE to arrive at ^xE, such that it can be decomposed into

where xF∈RNF×1 consists of xEm that already satisfy the 1-bit constraint and is fixed throughout the P-BB procedure. xR=[xR1,xR2,⋯,xRNR]T consists of the residual entries in ^xE whose amplitudes are smaller than 1√2Nt. Following the Proposition, we obtain NF≥(2Nt−2K+1), NR≤(2K−1) and NF+NR=2Nt. Similarly, we rearrange M into ^M such that ^M^xE=M~xE, which is also decomposed into

where MF=[^mF1,^mF2,⋯,^mF2K]T∈R2K×NF and MR=[^mR1,^mR2,⋯,^mR2K]T∈R2K×NR. The proposed P-BB approach aims to further optimize xR with xF fixed, which leads to the following optimization problem:

The subsequent BB procedure follows [27] and is omitted here due to the limited space, where we note that to guarantee a fast convergence speed, in the branching process we adopt the adaptive subdivision rule to choose the index of the entry in xR which is to be allocated a value in the current iteration. The corresponding index of the entry that is chosen should satisfy:

where xRn is the n-th entry in xR and n is its corresponding index. This proposed 1-bit precoding algorithm is termed ‘CI 1-Bit P-BB’.