In this paper, we present the system submitted to "SemEval-2020 Task 12". The proposed system aims at automatically identify the Offensive Language in Arabic Tweets. A machine learning based approach has been used to design our system. We implemented a linear classifier with Stochastic Gradient Descent (SGD) as optimization algorithm. Our model reported 84.20 development set and test set respectively. The best performed system and the system in the last rank reported 90.17 respectively. 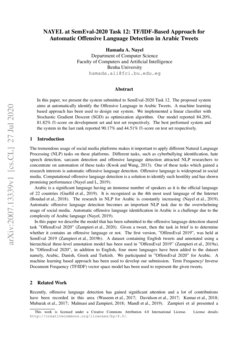 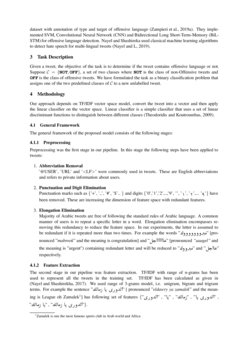 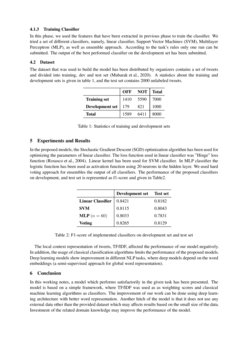 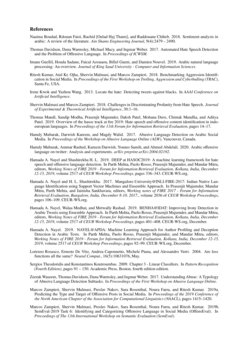 . In ”OffensEval 2020”, in addition to English, four more languages have been added to the dataset namely, Arabic, Danish, Greek and Turkish. We participated in ”OffensEval 2020” for Arabic. A machine learning based approach has been used to develop our submission. Term Frequency/ Inverse Document Frequency (TF/IDF) vector space model has been used to represent the given tweets.

Given a tweet, the objective of the task is to determine if the tweet contains offensive language or not. Suppose C={{NOT},{OFF}}, a set of two classes where NOT is the class of non-Offensive tweets and OFF is the class of offensive tweets. We have formulated the task as a binary classification problem that assigns one of the two predefined classes of C to a new unlabelled tweet.

Our approach depends on TF/IDF vector space model, convert the tweet into a vector and then apply the linear classifier on the vector space. Linear classifier is a simple classifier that uses a set of linear discriminant functions to distinguish between different classes [Theodoridis and Koutroumbas2009].

The general framework of the proposed model consists of the following stages:

Preprocessing was the first stage in our pipeline. In this stage the following steps have been applied to tweets:

The second stage in our pipeline was feature extraction. TF/IDF with range of n-grams has been used to represent all the tweets in the training set. TF/IDF has been calculated as given in

In this phase, we used the features that have been extracted in previous phase to train the classifier. We tried a set of different classifiers, namely, linear classifier, Support Vector Machines (SVM), Multilayer Perceptron (MLP), as well as ensemble approach. According to the task’s rules only one run can be submitted. The output of the best performed classifier on the development set has been submitted.

The dataset that was used to build the model has been distributed by organizers contains a set of tweets and divided into training, dev and test set [Mubarak et al.2020]. A statistics about the training and development sets is given in table 1, and the test set contains 2000 unlabeled tweets.

. Linear kernel has been used for SVM classifier. In MLP classifier the logistic function has been used as activation function using 20 neurons in the hidden layer. We used hard voting approach for ensembles the output of all classifiers. The performance of the proposed classifiers on development, and test set is represented as f1-score and given in Table

The local context representation of tweets, TF/IDF, affected the performance of our model negatively. In addition, the usage of classical classification algorithms limits the performance of the proposed models. Deep learning models show improvement in different NLP tasks, where deep models depend on the word embeddings (a semi-supervised approach for global word representation).

In this working notes, a model which performs satisfactorily in the given task has been presented. The model is based on a simple framework, where TF/IDF was used as as weighting scores and classical machine learning algorithms as classifiers. The improvement of our work can be done using deep learning architecture with better word representation. Another hitch of the model is that it does not use any external data other than the provided dataset which may affects results based on the small size of the data. Investment of the related domain knowledge may improve the performance of the model.