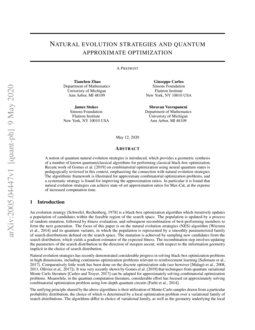 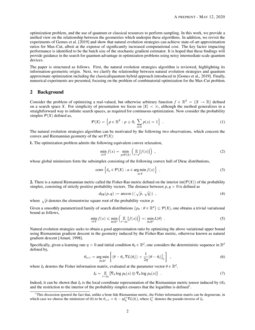 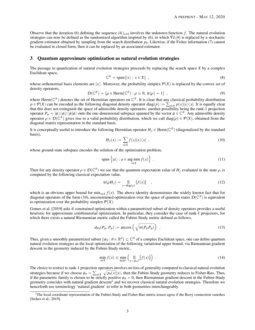 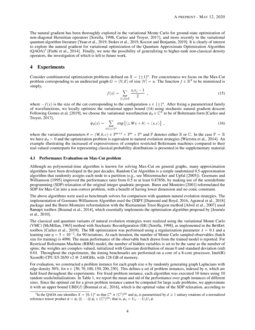 Considerable effort has been made recently in the development of heurist...
Guoming Wang, et al. ∙

An evolution strategy [Schwefel, , Rechenberg, 1978] is a black-box optimization algorithm which iteratively updates a population of candidates within the feasible region of the search space. The population is updated by a process of random mutation, followed by fitness evaluation, and subsequent recombination of best-performing members to form the next generation. The focus of this paper is on the natural evolution strategies (NES) algorithm [Wierstra et al., 2014]

The unifying principle shared by the above algorithms is their utilization of Monte-Carlo samples drawn from a particular probability distribution, the choice of which is determined by a local optimization problem over a variational family of search distributions. The algorithms differ in choice of variational family, as well as the geometry underlying the local optimization problem, and the use of quantum or classical resources to perform sampling. In this work, we provide a unified view on the relationship between the geometries which underpin these algorithms. In addition, we revisit the experiments of

Gomes et al. [2019] and show that natural evolution strategies can achieve state-of-art approximation ratios for Max-Cut, albeit at the expense of significantly increased computational cost. The key factor impacting performance is identified to be the batch size of the stochastic gradient estimator. It is hoped that these findings will provide guidance in the search for quantum advantage in optimization problems using noisy intermediate-scale quantum devices.

The paper is structured as follows. First, the natural evolution strategies algorithm is reviewed, highlighting its information-geometric origin. Next, we clarify the relationship between natural evolution strategies and quantum approximate optimization including the classical/quantum hybrid approach introduced in [Gomes et al., 2019]. Finally, numerical experiments are presented, focusing on the problem of combinatorial optimization for the Max-Cut problem.

Consider the problem of optimizing a real-valued, but otherwise arbitrary function f∈RX={X→R} defined on a search space X. For simplicity of presentation we focus on |X|<∞, although the method generalizes in a straightforward way to infinite search spaces, as required for continuous optimization. Now consider the probability simplex P(X) defined as,

The natural evolution strategies algorithm can be motivated by the following two observations, which concern the convex and Riemannian geometry of the set P(X):

whose global minimizers form the subsimplex consisting of the following convex hull of Dirac distributions,

2. There is a natural Riemannian metric called the Fisher-Rao metric defined on the interior int(P(X))

where √p denotes the elementwise square root of the probability vector p.

Given a smoothly parametrized family of search distributions {pθ:θ∈Rd}⊆P(X), one obtains a trivial variational bound as follows,

Specifically, given a learning rate η>0 and initial condition θ0∈Rd, one considers the deterministic sequence in Rd defined by,

where Iθ denotes the Fisher information matrix, evaluated at the parameter vector θ∈Rd,

Indeed, it can be shown that Iθ

4), and the restriction to the interior of the probability simplex ensures that the logarithm is defined111This discussion ignored the fact that, unlike a bone fide Riemannian metric, the Fisher information matrix can be degenerate, in which case we choose the minimizer of (6) to be θt+1=θt−ηI+θt∇L(θt), where I+θ denotes the pseudo-inverse of Iθ..

Observe that the iteration (6) defining the sequence (θt)t≥0 involves the unknown function f. The natural evolution strategies can now be defined as the randomized algorithm inspired by (6), in which ∇L(θ) is replaced by a stochastic gradient estimator obtained by sampling from the search distribution pθ. Likewise, if the Fisher information (7) cannot be evaluated in closed form, then it can be replaced by an associated estimator.

The passage to quantization of natural evolution strategies proceeds by replacing the search space X by a complex Euclidean space,

whose orthonormal basis elements are |x⟩. Moreover, the probability simplex P(X) is replaced by the convex set of density operators,

where Herm(CX) denotes the set of Hermitian operators on CX. It is clear that any classical probability distribution p∈P(X) can be encoded as the following diagonal density operator diag(p):=∑x∈Xp(x)|x⟩⟨x|. It is equally clear that this does not extinguish the space of admissible density operators: another possibility being the rank-1 projection operator Pψ=|ψ⟩⟨ψ|/⟨ψ|ψ⟩ onto the one-dimensional subspace spanned by the vector ψ∈CX. Any admissible density operator ρ∈D(CX) gives rise to a valid probability distribution, which we call diag(ρ)∈P(X), obtained from the diagonal matrix representation in the standard basis.

It is conceptually useful to introduce the following Hermitian operator Hf∈Herm(CX) (diagonalized by the standard basis),

whose ground-state subspace encodes the solution of the optimization problem,

asks if constrained optimization within a parametrized subset of density operators provides a useful heuristic for approximate combinatorial optimization. In particular, they consider the case of rank-1 projectors, for which there exists a natural Riemannian metric called the Fubini-Study metric defined as follows,

Thus, given a smoothly parametrized subset {ψθ:θ∈Rd}⊆CX of a complex Euclidean space, one can define quantum natural evolution strategies as the local optimization of the following variational upper bound, via Riemannian gradient descent in the geometry induced by the Fubini-Study metric,

The choice to restrict to rank-1 projection operators involves no loss of generality compared to classical natural evolution strategies because if we choose ψθ=∑x∈X√pθ(x)|x⟩, then the Fubini-Study geometry reduces to Fisher-Rao. Thus, if the parametric family is chosen to be strictly positive ψθ≻0, then Riemannian gradient descent in the Fubini-Study geometry coincides with natural gradient descent222The local coordinate representation of the Fubini-Study and Fisher-Rao metric tensor agree if the Berry connection vanishes [Stokes et al., 2019]. and we recover classical natural evolution strategies. Therefore we henceforth use terminology ‘natural gradient’ to refer to both geometries interchangeably.

The natural gradient has been thoroughly explored in the variational Monte Carlo for ground-state optimization of non-diagonal Hermitian operators [Sorella, 1998, Carleo and Troyer, 2017], and more recently in the variational quantum algorithm literature [Yuan et al., 2019, Stokes et al., 2019, Koczor and Benjamin, 2019]. It is clearly of interest to explore the natural gradient for variational optimization of the Quantum Approximate Optimization Algorithm (QAOA)333In the QAOA one identifies X={0,1}n so that CX≅(C2)⊗n and ψθ is parametrized by d≥1 unitary rotations of a normalized reference tensor product ϕ=ϕ1⊗⋯⊗ϕn∈(C2)⊗n; that is, ψθ=Ud⋯U2U1ϕ. [Farhi et al., 2014]. Finally, we note the possibility of generalizing to higher-rank non-classical density operators, the investigation of which is left to future work.

Consider combinatorial optimization problems defined on X={±1}n. For concreteness we focus on the Max-Cut problem corresponding to an undirected graph G=(V,E) of size |V|=n. The function f∈RX to be minimized is simply,

where −f(x) is the size of the cut corresponding to the configuration x∈{±}n. After fixing a parametrized family of wavefunctions, we locally optimize the variational upper bound (14) using stochastic natural gradient descent. Following Gomes et al. [2019], we choose the variational wavefunction ψθ∈CX to be of Boltzmann form [Carleo and Troyer, 2017],

where the variational parameters θ=(W,b,c)∈Fm×n×Fm×Fn and F denotes either R or C. In the case F=R we have ψθ≻0 and the optimization problem is equivalent to natural evolution strategies [Wierstra et al., 2014]

. An example illustrating the increased of expressiveness of complex restricted Boltzmann machines compared to their real-valued counterparts for representing classical probability distributions is presented in the supplementary material.

Although no polynomial-time algorithm is known for solving Max-Cut on general graphs, many approximation algorithms have been developed in the past decades. Random Cut Algorithm is a simple randomized 0.5-approximation algorithm that randomly assigns each node to a partition (e.g., see Mitzenmacher and Upfal [2005]). Goemans and Williamson [1995] improved the performance ratio from 0.5 to at least 0.87856, by making use of the semidefinite programming (SDP) relaxation of the original integer quadratic program. Burer and Monteiro [2001] reformulated the SDP for Max-Cut into a non-convex problem, with a benefit of having lower dimension and no conic constraint.

, for 90 iterations. At each iteration, the number of Monte Carlo sampled observables (batch size for training) is 4096. The mean performance of the observable batch drawn from the trained model is reported. For Restriced Boltzmann Machine (RBM) model, the number of hidden variables is set to be the same as the number of spins; the weights are complex-valued, initialized with Gaussian distribution of mean 0 and standard deviation (std) 0.01. Throughout the experiments, the timing benchmarks are performed on a core of a 8-core processor, Intel(R) Xeon(R) CPU E5-2650 v2 @ 2.60GHz, with 128 GB of memory.

For evaluation, we constructed a problem instance for each graph size n by randomly generating graph Laplacians with edge density 50%, for n∈{50,70,100,150,200,250}. This defines a set of problem instances, indexed by n, which are held fixed throughout the experiments. For fixed problem instance, each algorithm was executed 10 times using 10 random seeds/initializations. In Table 1, we report the mean and std of the performance over graph instances of different sizes. Since the optimal cut for a given problem instance cannot be computed for large scale problems, we approximate it with an upper bound UBD(I) [Boumal et al., 2016], which is the optimal value of the SDP relaxation, according to the arguments in [Goemans and Williamson, 1995]. In Figure 1(L), we present the ratio cut(A(I))/UBD(I) for the same algorithms A and graph instances I in Table 1 with box plot.

The choice of batch size was found to be a crucial factor controlling the performance of the algorithm. Intuitively, it quantifies the exploration capability in the state space: the algorithm has a better chance to discover the ground state if it is allowed to explore more. The performance (as measured by approximation ratio) as well as the training time, as a function of batch size are reported in Figure 1(R) on the graph instance with 150 nodes. The ablation study also reveals that increasing hidden unit density is correlated with performance, provided that training batch size is correspondingly increased. This is expected behaviour since increased model capacity is required to capture the increasing complexity from the sampled observables.

proved essential for converging to a good local optimimum; results on cRBM-1 suggest that optimizers equipped with natural gradient updates consistently outperformed those without. The use complex RBM yielded some improvement relative to the real-valued case, although the performance gap largely disappeared when natural gradient updates were applied. In addition, we found that architectures other than RBM can achieve high performance: the single-layer perceptron (FC) is compatible with RBM across all optimizers. In general, Stochastic Natural Gradient Descent consistently achieves optimal performance over all architectures, in comparison with other optimizers.

The Max-Cut approximation ratio achieved by natural evolution strategies is competitive with state-of-art solvers, although this comes at the expense of significantly increased computation time. It will be interesting to investigate other combinatorial optimization problems, particularly from the spin-glass literature, which do not admit semidefinite program relaxations.

It is legitimate to inquire about possible advantages for classical stochastic optimization, given access to efficiently simulable subsets of quantum states, such as the complex Boltzmann machine. In the case of natural evolution strategies our ablative study indicates that use of natural gradient descent levels the playing field between the quantum and classical variants.

Let X={0,1}n be the set of all bitstrings of length n and denote Pn⊆X the subset consisting of all 2n−1 bitstring with even Hamming weight. Define pn∈P(X) as follows,

where 1Pn:X→{0,1} is the indicator function for the subset Pn. Approximate representation of pn by a real-valued restricted Boltzmann machine requires a number m of hidden units scaling exponentially in n [Montúfar et al., 2011] (see also [Stokes and Terilla, 2019]). In contrast, pn can be exactly represented by a complex RBM with m=1 hidden unit.