This work studies the chord length distribution, in the case where both ends lie on a N-dimensional hypersphere (N ≥ 2). Actually, after connecting this distribution to the recently estimated surface of a hyperspherical cap SLi11, closed-form expressions of both the probability density function and the cumulative distribution function are straightforwardly extracted, which are followed by a discussion on its basic properties, among which its dependence from the hypersphere dimension. Additionally, the distribution of the dot product of unitary vectors is estimated, a problem that is related to the chord length. 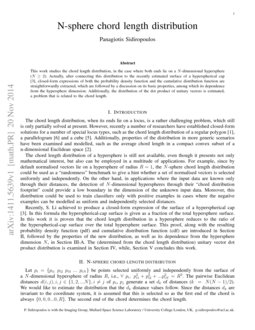 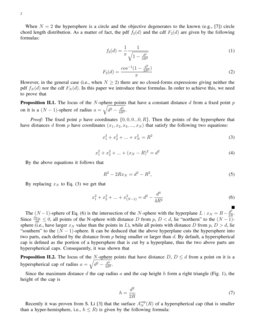 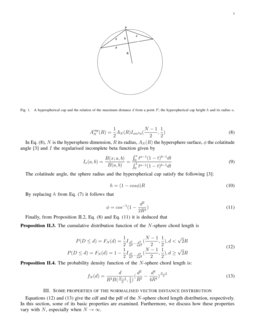 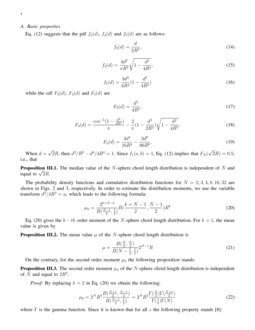 On the Distribution of the Information Density of Gaussian Random Vectors: Explicit Formulas and Tight Approximations

In this note, we derive the closed form formulae for moments of Student'...
J. Lars Kirkby, et al. ∙

The Distribution Function of the Longest Head Run

The chord length distribution, when its ends lie on a locus, is a rather challenging problem, which still is only partially solved at present. However, recently a number of researchers have established closed-form solutions for a number of special locus types, such as the chord length distribution of a regular polygon [1], a parallelogram [6] and a cube [5]. Additionally, properties of the distribution in more generic scenarios have been examined and modelled, such as the average chord length in a compact convex subset of a n-dimensional Euclidean space [2].

The chord length distribution of a hypersphere is still not available, even though it presents not only mathematical interest, but also can be employed in a multitude of applications. For example, since by default normalised vectors lie on a hypersphere of radius R=1, the N-sphere chord length distribution could be used as a “randomness” benchmark to give a hint whether a set of normalised vectors is selected uniformly and independently. On the other hand, in applications where the input data are known only through their distances, the detection of N

-dimensional hyperspheres through their “chord distribution footprint” could provide a low boundary in the dimension of the unknown input data. Moreover, this distribution could be used to train classifiers only with positive examples in cases where the negative examples can be modelled as uniform and independently selected distances.

Let pi={pi1 pi2 pi3 ... piN} be points selected uniformly and independently from the surface of a N-dimensional hypersphere of radius R, i.e., ∀ pi, p2i1+p2i2+...p2iN=R2. The pairwise Euclidean distances d(i,j),i,j∈{1,2,...N},i≠j of pi, pj generate a set dk of distances (k = N(N−1)/2). We would like to estimate the distribution that the dk distance values follow. Since the distances dk are invariant to the coordinate system, it is assumed that this is selected so as the first end of the chord is always {0,0,0...0,R}. The second end of the chord determines the chord length.

When N=2 the hypersphere is a circle and the objective degenerates to the known (e.g., [7]) circle chord length distribution. As a matter of fact, the pdf f2(d) and the cdf F2(d) are given by the following formulas:

However, in the general case (i.e., when N≥2) there are no closed-forms expressions giving neither the pdf fN(d) nor the cdf FN(d). In this paper we introduce these formulas. In order to achieve this, we need to prove that

The locus of the N-sphere points that have a constant distance d from a fixed point p on it is a (N−1)-sphere of radius a=√d2−d44R2.

By the above equations it follows that

-sphere with the hyperplane

L:xN=R−d22R. Since ∂xN∂d≤0, all points of the N-sphere with distance D from p, D<d, lie “northern” to the (N−1)-sphere (i.e., have larger xN value than the points in L), while all points with distance D from p, D>d, lie “southern” to the (N−1)-sphere. It can be deduced that the above hyperplane cuts the hypersphere into two parts, each defined by the distance from p being smaller or larger than d. By default, a hyperspherical cap is defined as the portion of a hypersphere that is cut by a hyperplane, thus the two above parts are hyperspherical caps. Consequently, it was shown that

The locus of the N-sphere points that have distance D, D≤d from a point on it is a hyperspherical cap of radius a=√d2−d44R2.

Since the maximum distance d the cap radius a and the cap height h form a right triangle (Fig. 1), the height of the cap is

Recently it was proven from S. Li [3] that the surface AcapN(R) of a hyperspherical cap (that is smaller than a hyper-hemisphere, i.e., h≤R) is given by the following formula:

In Eq. (8), N is the hypersphere dimension, R its radius, AN(R) the hypersphere surface, ϕ the colatitude angle [3] and I the regularised incomplete beta function given by

The colatitude angle, the sphere radius and the hyperspherical cap satisfy the following [3]:

By replacing h from Eq. (7) it follows that

The cumulative distribution function of the N-sphere chord length is

The probability density function of the N-sphere chord length is:

Iii Some properties of the normalised vector distance distribution

Equations (12) and (13) give the cdf and the pdf of the N-sphere chord length distribution, respectively. In this section, some of its basic properties are examined. Furthermore, we discuss how these properties vary with N, especially when N→∞.

The median value of the N-sphere chord length distribution is independent of N and equal to √2R.

The probability density functions and cumulative distribution functions for N=2,3,4,8,16,32 are shown in Figs. 2 and 3

, respectively. In order to estimate the distribution moments, we use the variable transform

d2/4R2=u, which leads to the following formula:

Eq. (20) gives the k−th order moment of the N-sphere chord length distribution. For k=1, the mean value is given by

On the contrary, for the second order moment μ2 the following proposition stands:

The second order moment μ2 of the N-sphere chord length distribution is independent of N and equal to 2R2.

where Γ is the gamma function. Since it is known that for all z the following property stands [8]:

imply that the variance

Finally, it should be noted that the Bertrand problem [4], which refers to the probability PR of a random chord being larger than the radius, can be answered by replacing d=R in Eq. (12), i.e.,

Fig. 4 demonstrates PR as a function of N. More results about the chord length distribution dependence from the hypersphere dimension N are given in the next sub-section.

Iii-B Dependence from the hypersphere dimension

The cdf of Eq. (12) can be recursively estimated using the following formula for regularised incomplete beta functions:

If Pi(D≤d) is the probability that a chord length is smaller than d, when both chord ends lie on a hypersphere of radius R and dimension Ni then

can be used to bound the degrees of freedom in cases where the only input data are dissimilarity scores, if a process for generating uniform and independent scores is available. Moreover, the above proposition implies that as the dimension increases the pdf of Eq. (

The latter is established through the following property of μ:

The Stirling approximation for factorials suggests that

It follows from propositions III.3 and III.5 that the variance limit when the dimension approaches infinity is zero, i.e.,

Figures 5 and 6 show μ and σ2 as a function of N, respectively. From proposition III.6 it follows that as the dimension increases the hypersphere chord lengths are concentrated within a small range around √2R. In order to give a quantitative measure of the chord length range, the difference between the largest and the smallest q

-quantile is employed. Note that this distance denotes the length of the interval from which the

q−2q most central values are selected. The results are shown on Table I. Table I demonstrates that when N≫2 most chord lengths lie within a small range around √2R. For example, the 93% of chord lengths of a 256-sphere lie inside an interval of length 0.1358R around √2R, i.e., an interval that spans only 6.79% of the available distance range.

An intuitive analysis of the distribution change with N can be done by considering the 3-dimensional sphere as a globe. In this case, the fixed point p is on the North Pole, and the points having distance √2R from p are the points in the equator. Seen under this prism, the concentration of the distribution around √2R denotes an expansion of the equatorial areas, in expense of the high latitude areas. Ideally, when N→∞ “almost all” points of the hypersphere lie in the equator (meaning that the set of points within distance √2R have infinitely more points than the set of points with distance either larger or smaller than √2R).

In the hypersphere of radius 1 the distance of two points p1 and p2 d12 and the dot product of the vectors →u1=−−→Op1 and →u2=−−→Op2 (where O is the centre of the hypersphere) are connected via the following relation:

Since the distance distribution is already known, the dot product distribution can be estimated through Eq. (30). As a matter of fact, if FC is the cdf of the unitary dot product C=→u1⋅→u2 then

d12 values are always positive, thus the above equation can be reformulated as

The corresponding pdf is

The pdf is symmetric around c=0

, thus all odd-order moments (among which, the average) are independent of

N and equal to 0. For the even-order moments, i.e., when k=2λ, the following formula stands:

In this paper, the probability distribution that follow the

N-sphere chord lengths was introduced. After estimating the pdf and the cdf, some of its basic properties were examined, among which its dependency from the dimension of the hypersphere. Starting from it, the distribution of the dot product of two randomly selected unitary vectors was also estimated.