In data science, it is often required to estimate dependencies between different data sources. These dependencies are typically calculated using Pearson's correlation, distance correlation, and/or mutual information. However, none of these measures satisfy all the Granger's axioms for an "ideal measure". One such ideal measure, proposed by Granger himself, calculates the Bhattacharyya distance between the joint probability density function (pdf) and the product of marginal pdfs. We call this measure the mutual dependence. However, to date this measure has not been directly computable from data. In this paper, we use our recently introduced maximum likelihood non-parametric estimator for band-limited pdfs, to compute the mutual dependence directly from the data. We construct the estimator of mutual dependence and compare its performance to standard measures (Pearson's and distance correlation) for different known pdfs by computing convergence rates, computational complexity, and the ability to capture nonlinear dependencies. Our mutual dependence estimator requires fewer samples to converge to theoretical values, is faster to compute, and captures more complex dependencies than standard measures. 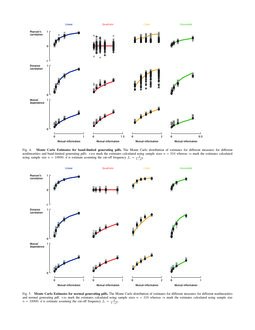 In this survey, we present and compare different approaches to estimate ...
D. Gencaga, et al. ∙

A bivariate copula capturing the dependence of a random variable and a random vector, its estimation and applications

We define a bivariate copula that captures the scale-invariant extent of...
Sebastian Fuchs, et al. ∙

In data science and modeling, it is often required to test whether two random variables are independent. Out of several measures that quantify dependencies between random variables [2, 1, 3, 4], the most widely used are mutual information I, Pearson’s correlation r, and distance correlation R.

An “ideal measure” should satisfy axioms given in Table I and should be directly estimable from the data. A less popular and unnamed measure uses the Bhattacharyya distance between the joint pdf and the product of the marginals as a measure for dependence between two random variables [7, 8]. It has been shown that this measure satisfies all six axioms. Importantly, this measure is invariant under continuous and strictly increasing transformations [9, 6]. It is also closely related to mutual information, k-class entropy and copula [10, 11, 12]. In this paper, we call this measure mutual dependence, d.

Mutual dependence has not been widely used because, like mutual information, it requires non-parametric density estimation to compute the marginal and joint pdfs, which are then substituted into the theoretical measure and numerically integrated to yield estimates. This process is both computationally complex and inaccurate. In this paper, we develop an estimator that estimates mutual dependence directly from the data. It uses our recently proposed Band-Limited Maximum Likelihood (BLML) estimator that maximizes the data likelihood function over a set of band-limited pdfs with known cut-off frequency fc. The BLML estimator is consistent, efficiently computable, and results in a smooth pdf [13]

. The BLML estimator also has a faster rate of convergence and reduced computational complexity over other widely used non-parametric methods such as kernel density estimators. Along with these properties, if the BLML estimator is substituted into the expression for mutual dependence (see (

5)), the mutual dependence can be computed directly from the data without performing numerical integration, which is often inaccurate and inefficient.

We show through simulations that d converges faster than R and r for various data sets with different types of linear and nonlinear dependencies, and the convergence rate for computing d is maintained for different type of nonlinearities. d is faster to compute than R as it has O(B2+n) time complexity, where B is the number of bins containing a finite number of samples which is always less than or equal to n (the number of data samples).

where U and V follow either a band-limited pdf

or a normal pdf

The ‘spread’ ρ is varied from 0.1 to 0.9 to obtain different degrees of dependencies. Figure 1 illustrates the data generated in this example.

The goal of the dependency measures is to quantify dependencies between X and Y given the data. In cases where underlying pdfs are known these dependency are captured pretty nicely by mutual information.

Therefore in Figure 2, we plot theoretical values for Pearson’s and distance correlation of dependence as a function of mutual information for the four different nonlinearity types and the two different generating pdfs.

Both Pearson’s and distance correlation measures depend largely on the nonlinearity for a given value of mutual information. This variability may occur because both the types of correlation measures are not invariant to strictly monotonic transformations, unlike mutual information. Therefore, changing the type of nonlinearity results in different values for both Pearson’s and distance correlation, while the mutual information remains invariant. Such variance is undesirable as it may lead to incorrect inferences when comparing dependencies between data having different types of nonlinear dependencies. Therefore, a measure that is invariant to strictly monotonic transformations is desirable.

Iii Mutual dependence and its estimation

In this section, we introduce the mutual dependence, which is based on an unnamed existing measure, and show several properties of this measure. Then, we derive an estimator of mutual dependence derived directly from data generated from band-limited pdfs. Finally, we describe efficient algorithms to compute this estimator.

Consider two random variables X and Y, their joint distribution fXY(x,y), and their marginal distributions fX(x) and fY(y). These random variables are independent if and only if fXY(x,y)=fX(x)fY(y). It is therefore natural to measure dependence as the distance (in the space of pdfs) between the joint and the product of marginal distributions. A good distance candidate is the Bhattacharyya distance (also known as Hellinger distance). See [6, 9] for details.

The mutual dependence d(X,Y) between two random variables X and Y is defined as the Bhattacharyya distance dh(⋅,⋅) between their joint distribution fXY(x,y) and the product of their marginal distributions fX(x) and fY(y), that is,

Due to symmetry of d(⋅,⋅), it is easy to see that d(X,Y)=d(Y,X). The measure d∈(0,1) if X and Y are partially dependent which quantifies the degree of dependence between the two random variables. In the extreme cases, d=0 ⇔ X and Y are independent and d=1 if either x or y is a Borel-measurable function of the other. Also, it can be easily established that d is invariant under strictly monotonic transformations ψ1 and ψ2, i.e d(X,Y)=d(ψ1(X),ψ2(Y)). A detailed description of these properties can be found in [6, 9].

For jointly normal data, the mutual dependence can be estimated by first calculating the Bhattacharyya distance between two multivariate Gaussian distributions

are the mean vectors and

To estimate d, we use the BLML method [13] that maximizes the likelihood of observing data samples over the set of band-limited pdfs. The BLML estimator is shown to outperform kernel density estimators (KDE) both in convergence rates and computational time and hence provides a better alternative for non-parametric estimation of pdfs. In addition, the structure of the BLML estimator is well suited for evaluating the integral in (5), resulting in an estimate which is a direct function of observed data and hence avoids numerical integration errors.

Below we briefly describe the BLML estimator.

Consider n independent samples of an unknown BL pdf, fX(x), with assumed cut-off frequency fc. Then the BLML estimator of fX(x) is given as:

where, fc∈Rm is the assumed cutoff frequency, vectors xi’s, with i=1⋯n, are the data samples, sincfc(x)≜∏mk=1sin(πfckxk)πxk and the vector ^c≜[^c1,⋯,^cn]T, is given by

See [13] for details. Now we introduce the estimator for d, ^d in the following theorem.

If (xi,yi)  i=1,⋯,n are n paired independent and identically distributed data observations and fc is the cut-off frequency parameter. Then the estimator for mutual dependence is given as:

The BLML estimators of fXY, fX and fY from Theorem III.1 (using same cut-off frequency [fc,fc],fc and fc respectively) are plugged into (5) and the resultant equation is integrated which gives ^d.

[13] such as BLMLBQP and BLMLTrivial, can be used directly to compute c(XY)i, c(X)i, c(Y)i approximately for each i for small scale (n<100) and large scale (n>100) problems, respectively.

To further improve the computational time BLMLQuick algorithm [13] can also be used. BLMLQuick uses binning and estimates c(XY)i, c(X)i, c(Y)i approximately for each i. It is also shown in [13] that both BLMLTrivial and BLMLQuick algorithms yield consistent estimate of pdfs if the true pdf is strictly positive, therefore in cases where the joint fXY>0 the estimate, d is also consistent.

In this section, we evaluate the performance of our estimator for mutual information by first comparing the empirical distribution of the estimator with the empirical distribution of the estimators for Pearson’s and distance correlation for different mutual information values, I, nonlinearities, g(X), and generating pdfs, fX(x). We compare the convergence of these metrics to the true values for different sample sizes. Finally, we compare the computational complexity of our estimator with the estimator for distance correlation to evaluate the relative computational time needed to implement each estimator.

Figure 6 plots the integration (over different I values) of mean squared error (IMSE) between the theoretical and estimated measures using about 50 Monte Carlo runs, for different nonlinearities and generating pdf types.

In this paper, we introduced a novel estimator for measuring dependency that can be directly computed from the data. Our estimator computes the mutual dependence which is an “ideal” measure for dependence between two random variables [6]. Our estimator has advantages over mutual information estimators as it does not require estimating the pdfs from data. It also has advantage over Pearson’s and distance correlation estimators as it is invariant under strictly monotonic transformation. Further, we showed that under simulation, estimators of both Pearson’s and distance correlation require more samples to achieve the same integrated mean squared error (IMSE) as compared to our mutual dependence estimator showing lower convergence rate. The slower convergence rate for the estimators of Pearson’s and distance correlation was due to their higher variance and bias for the nonlinearly dependent data. Such nonlinearities did not affect our estimator and it showed a uniform decrease in IMSE as the sample size increases for all tested nonlinearities. Even further, our estimate for mutual dependence showed a computational time complexity of O(B2+n) where B≤n is the number of bins, which is superior to the time complexity of distance correlation (O(n2)) and is much faster when the data is dense.

Although our estimator for the mutual dependence showed some nice properties under simulation, it remained to be established that it shows consistency for any nonlinearity which would require building up a theoretical proof. Further, in this paper, we assumed through out that we knew the cut-off frequency of the band-limited pdf or approximate cut-off frequency for the normal pdf (the band where most of the power of pdf lies, in case it is not band limited). However, in general this cut-off frequency is not known. A more in-depth analysis is needed to understand the behavior of our estimator as a function of the cut-off frequency.