We present an efficient architecture to detect mood/themes in music tracks on autotagging-moodtheme subset of the MTG-Jamendo dataset. Our approach consists of two blocks, a CNN block based on MobileNetV2 architecture and a self-attention block from Transformer architecture to capture long term temporal characteristics. We show that our proposed model produces a significant improvement over the baseline model. Our model (team name: AMLAG) achieves 4th place on PR-AUC-macro Leaderboard in MediaEval 2019: Emotion and Theme Recognition in Music Using Jamendo. 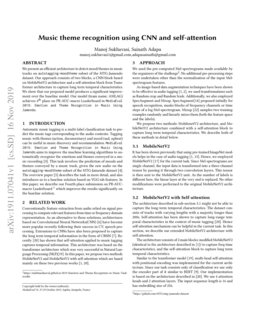 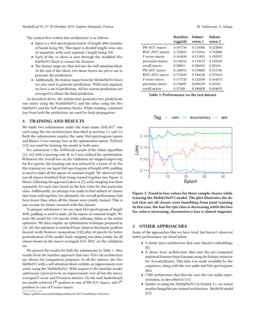 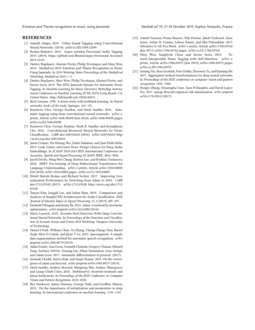 Automatic music tagging is a multi-label classification task to predict the music tags corresponding to the audio contents. Tagging music with themes (action, documentary) and mood (sad, upbeat) can be useful in music discovery and recommendation. MediaEval 2019: Emotion and Theme Recognition in Music Using Jamendo

(Bogdanov et al., 2019a). This task involves the prediction of moods and themes conveyed by a music track, given the raw audio on the autotagging-moodtheme subset of the MTG-Jamendo dataset (Bogdanov et al., 2019b). The overview paper (Bogdanov et al., 2019a) describes the task in more detail, and also introduces us to a baseline solution based on VGG-ish features. In this paper, we describe our Fourth place submission on PR-AUC-macro Leaderboard 111https://multimediaeval.github.io/2019-Emotion-and-Theme-Recognition-in-Music-Task/results which improves the results significantly on the baseline solution.

Conventionally feature extraction from audio relied on signal processing to compute relevant features from time or frequency domain representation. As an alternative to these solutions, architectures based on Convolutional Neural Networks(CNN)

has shown that self-attention applied to music tagging captures temporal information. This architecture was based on the transformer architecture which was very successful in Natural Language Processing (NLP)

We used the pre-computed Mel-spectrograms made available by the organizers of the challenge222https://github.com/MTG/mtg-jamendo-dataset. No additional pre-processing steps were undertaken other than the normalization of the input Mel-spectrogram features.

As image-based data augmentation techniques have been shown to be effective in audio tagging (Adapa, 2019; Baikulov, 2019), we used transformations such as Random crop and Random Scale. Additionally, we also employed SpecAugment and Mixup. SpecAugment(Park et al., 2019) proposed initially for speech recognition, masks blocks of frequency channels or time steps of a log Mel-spectrogram. Mixup (Zhang et al., 2017) samples two training examples randomly and linearly mixes them (both the feature space and the labels).

We propose two methods: MobilenetV2 architecture, and MobileNetV2 architecture combined with a self-attention block to capture long term temporal characteristics. We describe both of these methods in detail below.

for the current task. Since Mel-spectrograms are single channel, the input data is transformed into a three-channel tensor by passing it through two convolution layers. This tensor is then sent to the MobileNetV2 unit. As the number of labels is different here, the linear layer at the very end is replaced. No other modifications were performed to the original MobileNetV2 architecture.

The architecture described in sub-section 3.1 might not be able to capture the long-term temporal characteristics. The dataset consists of tracks with varying lengths with a majority longer than 200s. Self-attention has been shown to capture long-range temporal characteristics in the context of music tagging (Won et al., 2019). Hence self-attention mechanism can be helpful in the current task. In this section, we describe our extended MobileNetV2 architecture with self-attention.

Similar to the transformer model (Vaswani et al., 2017), multi-head self-attention with positional encoding was implemented for the current architecture. Since our task consists only of classification we use only the encoder part of it similar to BERT (Devlin et al., 2018). Our implementation is based on the architecture described in (Won et al., 2019). We use 4 attention heads and 2 attention layers. The input sequence length is 16 and has embedding size of 256.

The control flow within this architecture is as follows:

We made two submissions under the team name AMLAG333https://github.com/sainathadapa/mediaeval-2019-moodtheme-detection, one each using the two architectures described in sections 3.1 and 3.2

. Both the submissions employ the same Mel-spectrogram inputs and Binary Cross-entropy loss as the optimization metric. PyTorch

with a learning rate of 1e-3 was utilized for optimization. Whenever the overall loss on the validation set stopped improving for five epochs, the learning rate was reduced by a factor of 10. For this training we use input Mel-spectrogram of length 6590, padding is used to make all the inputs of constant length. We observed that not all classes benefited from being trained together (see Figure

1). Hence, following the approach taken in (Caruana, 1998), early stopping was done separately for each class based on the loss value for that particular class. Additionally, an attempt was made to find subsets of classes that train well together, but ultimately the overall performance had been lower than when all the classes were jointly trained. This is one avenue for future research with this dataset.

To prepare submission 2, we use input Mel-spectrogram of length 4096, padding is used to make all the inputs of constant length. We train the model for 120 epochs while utilizing Adam as the initial optimizer. We then employ an optimization technique proposed in (Keskar and Socher, 2017; Won et al., 2019)

: the optimizer is switched from Adam to Stochastic gradient descent (with Nesterov momentum

(Sutskever et al., 2013)) after 60 epochs for better generalization of the model. Early stopping was done jointly for all classes based on the macro-averaged AUC-ROC on the validation set.

We present the results for both the submissions in Table 1. Also, results from the baseline approach that uses VGG-ish architecture are shown for comparison purposes. In all the metrics, the MobileNetV2 with a self-attention block exhibits an improvement over solely using the MobileNetV2. With respect to the baseline model, submission 2

proved to be an improvement over all but the micro-averaged F-score and Precision metrics. On the task leaderboard, our model achieved 4

Some of the approaches that we have tried, but haven’t observed better performance are listed below: