The potential use of non-linear speech features has not been investigated for music analysis although other commonly used speech features like Mel Frequency Ceptral Coefficients (MFCC) and pitch have been used extensively. In this paper, we assume an audio signal to be a sum of modulated sinusoidal and then use the energy separation algorithm to decompose the audio into amplitude and frequency modulation components using the non-linear Teager-Kaiser energy operator. We first identify the distribution of these non-linear features for music only and voice only segments in the audio signal in different Mel spaced frequency bands and show that they have the ability to discriminate. The proposed method based on Kullback-Leibler divergence measure is evaluated using a set of Indian classical songs from three different artists. Experimental results show that the discrimination ability is evident in certain low and mid frequency bands (200 - 1500 Hz). 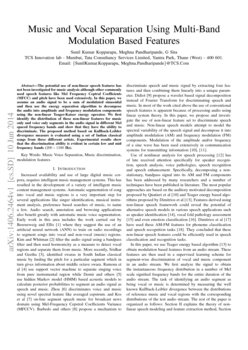 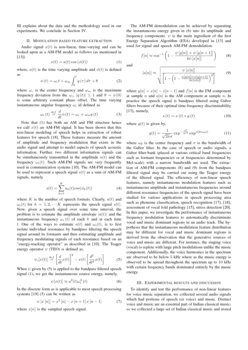 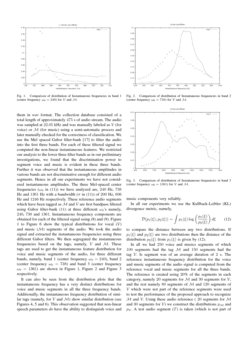 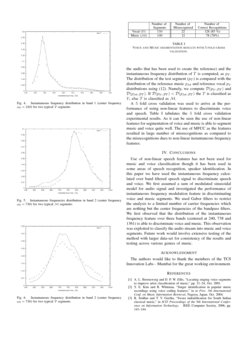 Increased availability and use of large digital music corpora, requires intelligent music management systems. This has resulted in the development of a variety of intelligent music content management systems. Automatic segmentation of song into vocal and music regions is a very important step for several applications like singer identification, musical instrument analysis, preference based searches of music, to name a few. Audio search, annotation and browsing applications also benefit greatly with automatic music voice segmentation. Early work in this area includes the work carried out by Berenzweig and Ellis [1]

where they suggest the use of an artificial neural network (ANN) to train on radio recordings to segment songs into vocal and non-vocal (music) regions. Kim and Whitman

[2] filter the audio signal using a bandpass filter and then used hormonicity as a measure to detect vocal regions and separate them from music. More recently, Sridhar and Geetha [3], identified swaras in South Indian classical music by finding the pitch for a particular segment which in turn gives information about middle octave swara. Ramona et al [4]

use hidden Markov model (HMM) based acoustic models to calculate posterior probabilities to segment an audio signal as speech and music. Zhou

[8] propose a mechanism to discriminate speech and music signal by extracting four features and then combining them linearly into a unique parameter. Didiot [9]

propose a wavelet based signal decomposition instead of Fourier Transform for discriminating speech and music. In most of the work cited above the use of conventional speech features is apparent because of processing audio using linear system theory. In this paper, we propose and investigate the use of non-linear feature set to discriminate speech and music. Non-linear speech models attempt to model the spectral variability of the speech signal and decompose it into amplitude modulation (AM) and frequency modulation (FM) components. Modulation of the amplitude and/or frequency of a sine wave has been used extensively in communication systems for transmitting information

Use of nonlinear analysis for speech processing [12] has of late received attention specifically for speaker recognition, speech analysis, voice pathologies, speech recognition and speech enhancement. Specifically, decomposing a non-stationary, bandpass signal into its AM and FM components has been addressed by many researchers and a number of techniques have been published in literature. The most popular approaches are based on the auditory motivated decomposition proposed by Quatieri et al [10] and Teager energy based algorithms proposed by Dimitrios et al [13]. Features derived using non-linear speech framework could reveal the potential of alternative speech models in various speech applications such as speaker identification [14], vocal fold pathology assessment [15] and even emotion classification [16]. Dimitrios et al [17] have used these AM-FM features for phoneme classification and speech recognition tasks [18]. They concluded that these non-linear speech features could be efficiently used in speech classification and recognition tasks.

In this paper, we use Teager energy based algorithm [13]

III explains about the data and the methodology used in our experiments. We conclude in Section IV.

Audio signal x(t) is non-linear, time-varying and can be looked upon as a AM-FM model as follows (as mentioned in [13])

where, a(t) is the time varying amplitude and ϕ(t) is defined as

where ωc is the center frequency and ωm is the maximum frequency deviation from the ωc, |q(t)|≤1 and θ=ϕ(0) is some arbitrary constant phase offset. The time varying instantaneous angular frequency ωi id defined as

Note that (1) has both an AM and FM structure hence we call x(t) an AM-FM signal. It has been shown that this non-linear modeling of speech helps in extraction of robust features for speech [18]. These features measure the amount of amplitude and frequency modulation that exists in the audio signal and attempt to model aspects of speech acoustic information. Further, two different information signals can be simultaneously transmitted in the amplitude a(t) and the frequency ωi(t). Such AM-FM signals are very frequently used in communication systems [10]. The AM-FM model can be used to represent a speech signal s(t) as a sum of AM-FM signals, namely

where K is the number of speech formats. Clearly, a(t) and ωi(t) for k=1,2,⋯K represents the speech signal s(t)

. Now, given a speech signal over some time interval, the problem is to estimate the amplitude envelope

|a(t)| and the instantaneous frequency ωi(t) of each k and at each time t. One of the ways to estimate a(t) and ωi(t), is to first isolate individual resonance by bandpass filtering the speech signal around its formants and then estimating amplitude and frequency modulating signals of each resonance based on an ”energy-tracking operator” as described in [10]. The Teager energy operator ψ (TEO) is defined as,

When ψ given by (5) is applied to the bandpass filtered speech signal (1), we get the instantaneous source energy, namely,

where x[n] is the sampled speech signal.

The AM-FM demodulation can be achieved by separating the instantaneous energy given in (6) into its amplitude and frequency components. ψ is the main ingredient of the first Energy Separation Algorithm (ESA) developed in [13] and used for signal and speech AM-FM demodulation.

where ω0 is the center frequency and σ is the bandwidth of the Gabor filter. In the case of speech or audio signals, a Gabor filter-bank (placed at various critical band frequencies such as formant frequencies or at frequencies determined by Mel-scale) with a narrow bandwidth are used. The extraction of AM-FM components (8) and (9) from the bandpass filtered signal may be carried out using the Teager energy of the filtered signal. The efficiency of non-linear speech features, namely instantaneous modulation features such as instantaneous amplitude and instantaneous frequencies around different resonance frequencies of the speech signal have been studied for various applications in speech processing area such as phoneme classification, speech recognition [17, 18], assessment of vocal fold pathology [15], stress detection [20]. In this paper, we investigate the performance of instantaneous frequency modulation features to automatically discriminate vocal and music dominant regions in an audio track. The hypothesis that the instantaneous modulation feature distribution may be different for vocal and music dominant regions is derived from the observation that the generative sources of voice and music are different. For instance, the singing voice (vocal) is replete with large pitch modulations unlike the music component. Additionally, the voice harmonics in the spectrum are observed to be below 5 kHz where as the music energy is observed to be spread throughout the spectrum up to 10 kHz with certain frequency bands dominated entirely by the music energy.

To identify and test the performance of non-linear features for voice music separation, we collected several audio signals which had portions of speech (or voice) and music. Distinct voice and music are an essential part of Indian classical music; so we collected a large set of Indian classical music and stored them in wav format. The collection database consisted of a total length of approximately 475 s of audio stream. The audio was sampled at 22.05 kHz and was manually labeled as V (for voice) or M (for music) using a semi-automatic process and later manually checked for the correctness of classification. We use the Mel spaced Gabor filter-bank [17] to filter the audio into the first three bands. For each of these filtered signal we computed the non-linear instantaneous features. We restricted our analysis to the lower three filter bands as in our preliminary investigations, we found that the discrimination power to segment voice and music is evident in these three bands. Further it was observed that the instantaneous amplitudes in various bands are not discriminative enough for different audio segments. Hence in all our experiments we have not considered instantaneous amplitudes. The three Mel-spaced center frequencies (ω0 in (11)) we have analyzed are, 240 Hz, 738 Hz and 1361 Hz with a bandwidth (σ in (11)) of 200 Hz, 606 Hz and 1246 Hz respectively. These reference audio segments which have been tagged as M and V are first bandpass filtered using Gabor filter-bank (11) at three different ω0’s namely, 240, 738 and 1361. Instantaneous frequency components are obtained for each of the filtered signal using (8) and (9). Figure 1 to Figure 6 show the typical distributions for vocal (V) and music (M) segments of the audio. We took the audio signal and extracted the instantaneous frequencies using three different Gabor filters. We then segregated the instantaneous frequencies based on the tags, namely, V and M. These tags are used to get the instantaneous feature distribution for voice and music segments of the audio, for three different bands, namely, band 1 (center frequency ω0=240), band 2 (center frequency ω0=738) and band 3 (center frequency ω0=1361) are shown in Figure 1, Figure 2 and Figure 3 respectively.

In all our experiments we use the Kullback-Leibler (KL) divergence metric, namely,

V, else T is classified as M.

As it can be seen the use of non-linear features for segmentation of voice and music is able to segment music and voice quite well. The use of MFCC as the features resulted in large number of misrecognitions as compared to the misrecognitions dues to non-linear instantaneous frequency features.

Use of non-linear speech features has not been used for music and voice classification though it has been used in some areas of speech recognition, speaker identification. In this paper we have used the instantaneous frequency calculated over band filtered speech signal to discriminate speech and voice. We first assumed a sum of modulated sinusoidal model for audio signal and investigated the performance of instantaneous frequency modulation feature in discriminating voice and music segments. We used Gabor filters to restrict the analysis to a limited number of carrier frequencies which are nothing but the center frequencies of the bandpass filters. We first observed that the distribution of the instantaneous frequency feature over three bands (centered at 240, 738 and 1361) is able to discriminate voice and music. This observation was exploited to classify the audio stream into music and voice segments. Future work would involve extensive testing of the method with larger data-set for consistency of the results and testing across various genres of music.

The authors would like to thank the members of the TCS Innovation Labs - Mumbai for the great working environment.