Multivariate Log-Skewed Distributions with normal kernel and their Applications

We introduce two classes of multivariate log skewed distributions with normal kernel: the log canonical fundamental skew-normal (log-CFUSN) and the log unified skew-normal (log-SUN). We also discuss some properties of the log-CFUSN family of distributions. These new classes of log-skewed distributions include the log-normal and multivariate log-skew normal families as particular cases. We discuss some issues related to Bayesian inference in the log-CFUSN family of distributions, mainly we focus on how to model the prior uncertainty about the skewing parameter. Based on the stochastic representation of the log-CFUSN family, we propose a data augmentation strategy for sampling from the posterior distributions. This proposed family is used to analyze the US national monthly precipitation data. We conclude that a high dimensional skewing function lead to a better model fit. 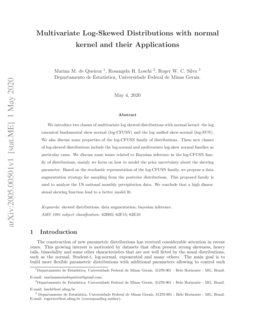 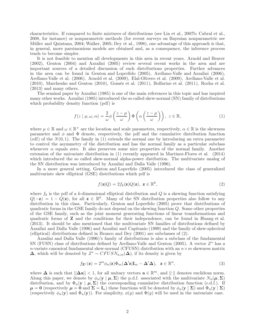 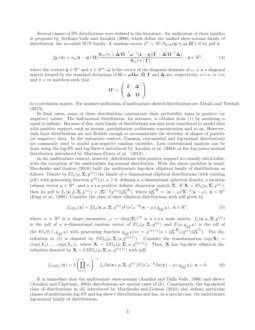 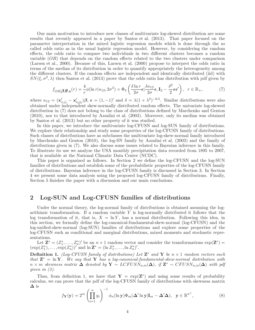 Some properties of the unified skew-normal distribution

We propose an asymptotic theory for distribution forecasting from the lo...
D. Kuang, et al. ∙

Models which include domain constraints occur in myriad contexts such as...
Hillary Koch, et al. ∙

Internet Traffic Volumes Are Not Gaussian – They Are Log-Normal: An 18-Year Longitudinal Study With Implications for Modelling and Prediction

UniLog: Deploy One Model and Specialize it for All Log Analysis Tasks

The construction of new parametric distributions has received considerable attention in recent years. This growing interest is motivated by datasets that often present strong skewness, heavy tails, bimodality and some other characteristics that are not well fitted by the usual distributions, such as the normal, Student-t, log-normal, exponential and many others. The main goal is to build more flexible parametric distributions with additional parameters allowing to control such characteristics. If compared to finite mixtures of distributions (see Lin et al., 2007b; Cabral et al., 2008, for instance) or nonparametric methods (for recent surveys on Bayesian nonparametric see Müller and Quintana, 2004; Walker, 2005; Dey et al., 1998), one advantage of this approach is that, in general, more parsimonious models are obtained and, as a consequence, the inference process tends to become simpler.

where μ∈R and ω∈R+ are the location and scale parameters, respectively, α∈R is the skewness parameter and ϕ and Φ

denote, respectively, the pdf and the cumulative distribution function (cdf) of the

N(0,1). The family in (1) extends the normal one by introducing an extra parameter to control the asymmetry of the distribution and has the normal family as a particular subclass whenever α equals zero. It also preserves some nice properties of the normal family. Another extension of the univariate distribution in (1) recently appeared in Martinez-Flores et al. (2014) which introduced the so called skew-normal alpha-power distibution. The multivariate analog of the SN distribution was introduced by Azzalini and Dalla Valle (1996).

In a more general setting, Genton and Loperfido (2005) introduced the class of generalized multivariate skew elliptical (GSE) distributions which pdf is

. Some other properties of the GSE family, such as the joint moment generating functions of linear transformations and quadratic forms of

Several classes of SN distributions were defined in the literature. An unification of these families is proposed by Arellano-Valle and Azzalini (2006) which define the unified skew-normal family of distribution, the so-called SUN family. A random vector Z∗∼SUNn,m(\boldmathη,\boldmathγ,¯%\boldmath$ω$,\boldmathΩ∗) if its pdf is

where the vectors \boldmathη∈Rn and \boldmathγ∈Rm, ¯\boldmathω is the vector of the diagonal elements of ω, ω

is a diagonal matrix formed by the standard deviations of

is a correlation matrix. For another unification of multivariate skewed distributions see Abtahi and Towhidi (2013).

In limit cases, some of these distributions concentrate their probability mass in positive (or negative) values. The half-normal distribution, for instance, is obtaind from (

equal to infinite. Because of this, such family of distributions has also been considered to model data with positive support, such as income, precipitation, pollutants concentration and so on. However, such limit distributions are not flexible enough to accommodate the diversity of shapes of positive (or negative) data. In the univariate context, Gamma, exponential and log-normal distributions are commonly used to model non-negative random variables. Less conventional analysis can be done using the log-SN and log-Skew-

Our main motivation to introduce new classes of multivariate log-skewed distribution are some results that recently appeared in a paper by Santos et al. (2013)

OR) that depends on the random effects related to the two clusters under comparison (Larsen et al., 2000). Because of this, Larsen et al. (2000) propose to interpret the odds ratio in terms of the median of its distribution in order to quantify appropriately the heterogeneity among the different clusters. If the random effects are independent and identically distributed (iid) with SN(ξ,σ2,λ) then Santos et al. (2013) prove that the odds ratio has distribution with pdf given by

where κ12=(x′i1j1−x′i2j2)%\boldmath$β$, \boldmathϵ=(1,−1)′ and δ=λ(1+λ2)−0.5. Similar distributions were also obtained under independent skew-normally distributed random effects. The univariate log-skewed distribution in (7) does not belong to the class of distributions defined by Marchenko and Genton (2010), nor to that introduced by Azzalini et al. (2003). Moreover, only its median was obtained by Santos et al. (2013) but no other property of it was studied.

Under the normal theory, the log-normal family of distributions is obtained assuming the logarithimic transformation. If a random variable Y is log-normally distributed it follows that the log transformation of it, that is, X=lnY, has a normal distribution. Following this idea, in this section, we formally define the log-canonical-fundamental-skew-normal (log-CFUSN) and the log-unified-skew-normal (log-SUN) families of distributions and explore some properties of the log-CFUSN such as conditional and marginal distributions, mixed moments and stochastic representations.

(Log-CFUSN family of distributions) Let Z∗ and Y be n×1 random vectors such that Z∗=lnY. We say that Y has a log-canonical-fundamental-skew-normal distribution with n×m skewness matrix Δ denoted by Y∼LCFUSNn,m(Δ), if Z∗∼CFUSNn,m(Δ) with pdf given in (3).

Thus, from definition 1, we have that Y=exp(Z∗) and using some results of probability calculus, we can prove that the pdf of the log-CFUSN family of distributions with skewness matrix Δ is

This distribution generalizes the multivariate log-SN distribution defined by Marchenko and Genton (2010) by assuming a m-variate skewing function. If in (8) we take m=1 and assume α=(Im−Δ′Δ)−12Δ′ we obtain the family defined by Marchenko and Genton (2010) which general expression is given in (???). If Δ is a matrix with all entries equal to zero we have the multivariate log-normal distribution. Another reason to study this distribution comes from results in Santos et al. (2013) summarized in the introduction. As it can be noticed, the distribution for the odds ratio given in (7) also belongs to the log-CFUSN family of distributions whenever the individuals under comparison have the same characteristics, that is, equal vector of covariates (xti1j1=xti2j2), and the scale parameter for the distribution of the random effects is σ2=1. In that case, OR∼LCFUSN1,2(Δ) where Δ=δ\boldmathϵ.

Figure 1 depicts the densities of LCFUSNn,m(Δ) for the case n=1 and some values of m and Δ. To simplify the presentation let 1n,m be the matrix of ones of order n×m and denote by 1n the column vector of ones of order n. Clearly the distribution allocates more mass to the tails when m increases. Moreover, the densities shape becomes more flexible if compared with (6).

It is clear that the curves in Figures 3 and 3 deviate from the origin when the entries of Δ are positive and curves are more concentrated around the origin when these entries are negative. Similar behavior is noted in the contour curves of the CFUSNn,m(\boldmathΔ) distribution in Arellano-Valle and Genton (2005).

It follows, as a consequence of Definition 2, that the pdf of Y is given by

Particularly, if Y∼LSUNn,m(0,0,1n,\boldmathΩ∗), where 1n is the column vector of ones of order n and \boldmathΩ∗=(\boldmathIm\boldmathΔ′\boldmathΔ\boldmathIn), it follows that Y∼LCFUSNn,m(Δ) with pdf given in (8).

2.1 Some properties of the Log-CFUSN family of distributions

If Y∼LCFUSNn,m(Δ), then its cdf is given by

The mixed moments of a random vector Y∼LCFUSNn,m(Δ) can be expressed in terms of the moment generating function of a CFUSNn,m(Δ) distribution. This can be seen in the following proposition.

Considering the result in (???), we can calculate the moments of a random vector with distribution LCFUSNn,m(Δ). For example, if we consider Y∼LCFUSN1,m(Δ), we have that

Y∼LCFUSN1,m(\boldmathΔ) are given, respectively, by

Figure 4 depicts the asymmetry coefficient and kurtosis for the LCFUSN1,1(\boldmathΔ) distribution. Observe that \boldmathΔ=0 corresponds to the log normal case. It is clear, at least in the case n=m=1, that asymmetry and kurtosis can change significantly depending on the choice of Δ.

Table 1 displays the asymmetry and kurtosis coefficients of the LCFUSN1,m(\boldmathΔ) as a function of m and it suggests a monotonic decreasing behavior of these quantities as m increases. Although the behavior of these coefficients depends on Δ, particularly, for \boldmathΔ=0.4×1′m and \boldmathΔ=−0.4×1′m the asymmetry and kurtosis coefficients of the LCFUSN1,m(Δ) are both smaller than those obtained for the LN(0,1) for all m considered in the study.

Similar to what is observed for the CFUSN family of distributions, the log-CFUSN is closed under marginalization but not under conditioning. The next result establishes that the LCFUSNn,m(Δ) distribution is closed under marginalization. The proof of this result will be omitted. It follows immediately from Proposition 2.6 in Arellano-Valle and Genton (2005) and Definition 1.

It is also possible to derive conditions for independence under the log-CFUSN family of distributions by assuming some constraints on the partitions defined in Proposition 3.

The proof of Proposition 4 is straightforward from Proposition 2.7 in Arellano-Valle and Genton (2005) and thus is omitted. We now obtain the conditional distributions under the LCFUSNn,m(\boldmathΔ) family.

2.2 A location-scale extension of the log-CFUSN distribution

More flexible class of distributions are obtained if we are able to include on it location and scale parameters. Usually, this is done considering a linear transformation of a variable with the standard distribution. Assuming this principle, we introduce the location-scale extension of the LCFUSNn,m distribution as follows.

Assume that X∼CFUSNn,m(Δ) and define the linear transformation W=\boldmathμ+Σ12X, where μ is an n×1 vector and Σ is an n×n positive definite matrix. As shown by Arellano-Valle and Genton (2005), the pdf of X is

Let us consider the transformation U=exp(W). By definition, U has a location-scale log-CFUSN distribution denoted by U∼LCFUSNn,m(\boldmathμ,Σ,Δ) and its pdf is

It is important to note that if Σ=diag{σ21,…,σ2n}, that is, if we are skewing an independent n-variate normal distribution, the distribution in (17) can be obtained from the log-SUN distribution given in (9) by assuming \boldmathη=μ, \boldmathγ=0, ¯\boldmathω=(σ1,…,σn) and \boldmathΩ∗=(\boldmathIm\boldmathΔ′\boldmathΔ\boldmathIn), that is, we have that U∼LSUNn,m(\boldmathμ,0,¯% \boldmathω,\boldmathΩ∗).

Marginal and conditional distributions in the location-scale log-CFUSN class of distributions are not easily obtainable. However, under some particular structures for Σ we can derive such results. Let W∼CFUSNn,m(μ,Σ,Δ), as defined in Expression 2.11 in Arellano-Valle and Genton (2005), and consider the partitions

where Wi, \boldmathμi and Δi have dimensions ni×1, ni×1 and ni×m, i=1,2, respectively, and n1+n2=n. Suppose also that Σ is a diagonal matrix such that

where Σij has dimension ni×nj. Under these conditions, it follows that Ui=exp(Wi)∼LCFUSN(\boldmathμi,Σii,Δi), that is the location-scale log-CFUSN family of distributions preserves closeness under marginalization.

Stochastic representations of skewed distributions are useful, for instance, to generate samples from those distributions more easily. They also play a very important role in inference if we are interested in apply MCMC or EM methods.

Assume that Z∗∼CFUSNn,m(\boldmathΔ), where ||\boldmathΔ′a||<1 for any unitary vector a∈Rn. Let D∼Nm(0,\boldmathIm), V∼Nn(0,\boldmathIn) where D and V are independent column random vectors of order m and n, respectively. Denote by |D| the vector (|D1|,...,|Dm|)′. Arellano-Valle and Genton (2005) prove that the marginal representation of Z∗ is

3 Some aspects of Bayesian Inference in the LCFUSN Family