In the multiterminal secret key agreement problem, a set of users want to discuss with each other until they share a common secret key independent of their discussion. We want to characterize the maximum secret key rate, called the secrecy capacity, asymptotically when the total discussion rate goes to zero. In the case of only two users, the capacity is equal to the Gács-Körner common information. However, when there are more than two users, the capacity is unknown. It is plausible that a multivariate extension of the Gács-Körner common information is the capacity, however, proving the converse is challenging. We resolved this for the hypergraphical sources and finite linear sources, and provide efficiently computable characterizations. We also give some ideas of extending the techniques to more general source models. 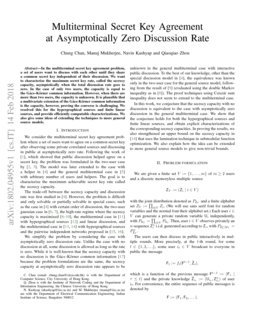 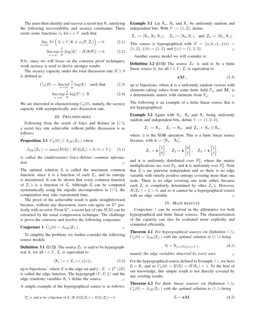 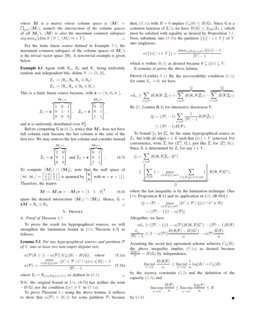 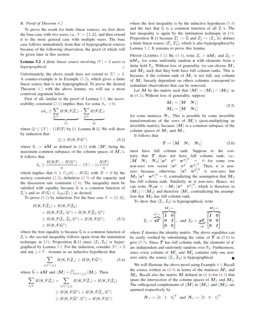 Conditional Disclosure of Secrets: A Noise and Signal Alignment Approach

On the Linear Capacity of Conditional Disclosure of Secrets

Conditional disclosure of secrets (CDS) is the problem of disclosing as ...
Zhou Li, et al. ∙

We consider the multiterminal secret key agreement problem where a set of users want to agree on a common secret key after observing some private correlated sources and discussing in public at asymptotically zero rate. Following the work of [1], which showed that public discussion helped agree on a secret key, the problem was formulated in the two-user case by [2, 3]. The model was later extended to the case with a helper in [4] and the general multiterminal case in [5] with arbitrary number of users and helpers. The goal is to characterize the maximum achievable secret key rate called the secrecy capacity.

We simplify the problem by considering the case with asymptotically zero discussion rate. Unlike the case with no discussion at all, some discussion is allowed as long as the rate is zero. While it is well-known that the secrecy capacity with no discussion is the Gács–Körner common information [17] because the problem formulations are the same, the secrecy capacity at asymptotically zero discussion rate appears to be unknown in the general multiterminal case with interactive public discussion. To the best of our knowledge, other than the special discussion model in [4], the equivalence was known only in the two-user case for the general source model, following from the result of [9] (evaluated using the double Markov inequality as in [8]). The proof techniques using Csiszár sum inequality does not seem to extend to the multiterminal case.

In this work, we conjecture that the secrecy capacity with no discussion is equivalent to the case with asymptotically zero discussion in the general multiterminal case. We show that the conjecture holds for both the hypergraphical sources and finite linear sources, and obtain explicit characterizations of the corresponding secrecy capacities. In proving the results, we also strengthened an upper bound on the secrecy capacity in [14] that uses the lamination technique in submodular function optimization. We also explain how the idea can be extended to more general source models to give non-trivial bounds.

We are given a finite set V:={1,…,m} of m≥2 users and a discrete memoryless multiple source

with the joint distribution denoted as

. (We will use sans serif font for random variables and the normal font their alphabet set.) Each user

The users can then discuss in public interactively in multiple rounds. More precisely, at the t-th round, for some t∈{1,2,…}, some user it∈V broadcast to everyone in public the message

which is a function of the previous message Ft−1:=(Fτ∣τ≤t) and the private knowledge ~Zit:=(Uit,Znit) of user it. For convenience, the entire sequence of public messages is denoted by

The users then identify and recover a secret key K, satisfying the following recoverability and secrecy constraints: There exists some functions ‘fi for i∈V such that

N.b., since we will focus on the converse proof techniques, weak secrecy is used to derive stronger results.

We are interested in characterizing C\operator@fontS(0), namely, the secrecy capacity with asymptotically zero discussion rate.

Following from the result of Gács and Körner in [17], a secret key rate achievable without public discussion is as follows:

The proof of the achievable result is quite straightforward because, without any discussion, users can agree on Gn perfectly with no error. From Gn, a secret key of rate H(G) can be extracted by the usual compression technique. The challenge is prove the converse and resolve the following conjecture:

To simplify the problem, we further consider the following source models.

The source ZV is said to be hypergraphical if, for all i∈V, Zi is equivalent to

A simple example of the hypergraphical source is as follows:

Another source model we will consider is:

The source ZV is said to be a finite linear source if, for all i∈V, Zi is equivalent to

up to bijections, where x

Fq, and Mi is a deterministic matrix with elements from Fq. □

The following is an example of a finite linear source that is not hypergraphical.

where ⊕ is the XOR operation. This is a finite linear source because, with x:=[XaXb],

F22, where the matrix multiplications are over F2, and x is uniformly over F22. Note that Zi’s are pairwise independent and so there is no edge variable with strictly positive entropy covering more than one node. There is no edge covering one node either, because each Zi is completely determined by other Zj’s. However, H(ZV)=2>0, and so it cannot be a hypergraphical source with no edge variable. □

Conjecture 1 can be resolved in the affirmative for both hypergraphical and finite linear sources. The characterization of the capacity can also be evaluated more explicitly and computed efficiently.

For hypergraphical sources (in Definition 3.1), C\operator@fontS(0)=J\operator@fontGK(ZV) with the optimal solution to (3.1) being

namely the edge variables observed by every user. □

For the hypergraphical source defined in Example 3.1, we have G=Xc and so C\operator@fontS(0)=H(G)=H(Xc)=1. To the best of our knowledge, this simple result is not directly covered by any existing results.

For finite linear sources (in Definition 3.2), C\operator@fontS(0)=J\operator@fontGK(ZV) with the optimal solution to (3.1) being

where M is a matrix whose column space is ‘<M‘>=⋂i∈V‘<Mi‘>, namely the intersection of the column spaces of all Mi’s. ‘<M‘> is also the maximum common subspace argmaxS{dimS∣S⊆‘<Mi‘>∀i∈V}. □

For the finite linear source defined in Example 3.2, the maximum common subspace of the column spaces of Mi’s is the trivial vector space {0}. A non-trivial example is given below.

This is a finite linear source because, with x:=[Xa,Xb,Xc],

and x is uniformly distributed over F22.

To prove the result for hypergraphical sources, we will strengthen the lamination bound in [14, Theorem 4.3] as follows:

For any hypergraphical sources and partition P of V into at least two non-empty disjoint sets,

To prove Theorem 4.1 using the above lemma, it suffices to show that ‘a(P)∈[0,1) for some partition P, because then, (5.1a) with R=0 implies C\operator@fontS(0)≤H(G). Since G is a common function of Zi’s, we have H(G)≤J\operator@fontGK(ZV), which must be satisfied with equality as desired by Proposition 3.1. Now, substitute into (5.1b) the partition {{i}∣i∈V} of V into singletons:

It remains to prove the above lemma.

By [5, Lemma B.1] for interactive discussion F,

To bound ‘(1), let Z′V be the same hypergraphical source as ZV but with all edges e∈E such that ‘x(e)=V removed. For convenience, write ¯Zi for (Z′ni,Ui), just like ~Zi for (Zni,Ui). Since G is determined by Zi for any i∈V,

Assuming the secret key agreement scheme achieves C\operator@fontS(R), the above inequality implies (5.1a) as desired because H(Gn)n=H(G) by independence,

by the secrecy constraint (2.2) and the definition of the capacity (2.3), and

To prove the result for finite linear sources, we first show the base case with two users, i.e., V={1,2}, and then extend it to the more general case with multiple users. The base case follows immediately from that of hypergraphical sources because of the following observation, the proof of which will be given later in this section:

Unfortunately, the above result does not extend to |V|>2. A counter-example is in Example (3.2), which gives a finite linear source that is not hypergraphical. To prove the desired Theorem 4.2 with the above lemma, we will use a more contrived argument below.

First of all, similar to the proof of Lemma 5.1, the recoverability constraint (2.1) implies that, for some ‘dn→0,

where G:=xM as defined in (4.2) with ‘<M‘> being the maximum common subspace of the column spaces of Mi’s. It follows that

which implies that 0≥C\operator@fontS(0)−H(G) with R=0 by the secrecy constraint (2.2), definition (2.3) of the capacity and the discussion rate constraint (2.4). The inequality must be satisfied with equality because G is a common function of Zi’s and so H(G)≤J\operator@fontGK(ZV) as desired.

where the first equality is because G is a common function of Zi’s, the second inequality follows again from the lamination technique in [19, Proposition B.1] since (Z1,Z2) is hypergraphical by Lemma 5.2. For the induction, consider |V|>2 and any j∈V. Assume as an inductive hypothesis that

where the first inequality is by the inductive hypothesis (5.3) and the fact that G is a common function of all Zi’s. The last inequality is again by the lamination technique in [19, Proposition B.1] because Z′1:=~G and Z′2:=(Zj,G) defines a finite linear source (Z′1,Z′2), which is also hypergraphical by Lemma 5.2. It remains to prove this lemma.

By (3.3), write Z1=xM1 and Z2=xM2, for some uniformly random x with elements from a finite field Fq. Without loss of generality, we can choose M1 and M2 such that they both have full column ranks. This is because, if the column rank of Mi is not full, any column of Mi linearly dependent on others columns correspond to redundant observations that can be removed.

for some matrices N1. This is possible by some invertible transformations of the rows of Mi

’s (post-multiplying an invertible matrix), because

denotes the identity matrix. The above equalities can be easily verified by substituting the value of

T in (5.5) to give (5.4). Since T has full column rank, the elements of x′ are independent and uniformly random over F2. Furthermore, since every column of M′1 and M′2 contains only one non-zero entry, the source (Z1,Z2) is hypergraphical. ■

We will illustrate the above proof using Example 4.1. Recall the source written in (4.3) in terms of the matrices M1 and M2. Recall also the matrix M defined in (4.4) for (4.2) that spans the intersection of the column spaces of M1 and M2. The orthogonal complements of ‘<M‘> in ‘<M1‘> and ‘<M2‘> are spanned respectively by

we have x′ uniformly distributed over F32,

In this work, we showed for hypergraphical and finite linear sources that the secrecy capacity at asymptotically zero discussion rate is given by the multivariate Gács–Körner common information. The main property for proving the results is the lamination technique in [14] for hypergraphical sources. In the case with two users V={1,2}, it simplifies to (5.2):

where G is the maximum common function of Z1 and Z2. The proof for finite linear source also boils down to this case, by noticing that a finite linear source for two users is a hypergraphical source. For more general source models, however, the above inequality does not hold, and so the techniques considered does not directly extend.

It is easy to show, however, that the above inequality still holds for the general sources if G is replaced by a random variable W

that satisfies the Markov chain

Z1"−"W"−"Z2. In particular, W can be the Wyner common information [20] between Z1 and Z2. This allows us to derive upper bounds on C\operator@fontS(0) for general sources such as