We present a probabilistic viewpoint to multiple kernel learning unifying well-known regularised risk approaches and recent advances in approximate Bayesian inference relaxations. The framework proposes a general objective function suitable for regression, robust regression and classification that is lower bound of the marginal likelihood and contains many regularised risk approaches as special cases. Furthermore, we derive an efficient and provably convergent optimisation algorithm. 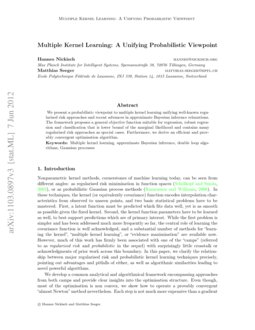 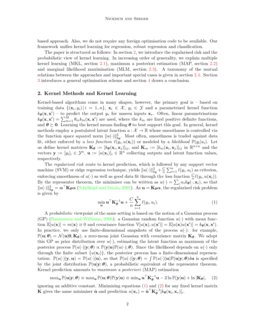 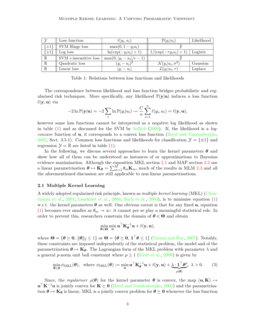 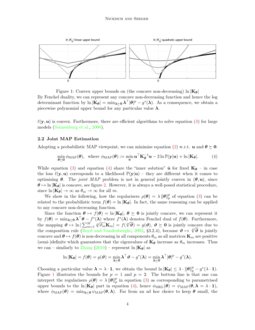 In this thesis a probabilistic framework is developed and proposed for D...
Pouria Mehrabi, et al. ∙

(Schölkopf and Smola, 2002), or as probabilistic Gaussian process methods (Rasmussen and Williams, 2006)

. In these techniques, the kernel (or equivalently covariance) function encodes interpolation characteristics from observed to unseen points, and two basic statistical problems have to be mastered. First, a latent function must be predicted which fits data well, yet is as smooth as possible given the fixed kernel. Second, the kernel function parameters have to be learned as well, to best support predictions which are of primary interest. While the first problem is simpler and has been addressed much more frequently so far, the central role of learning the covariance function is well acknowledged, and a substantial number of methods for “learning the kernel”, “multiple kernel learning”, or “evidence maximisation” are available now. However, much of this work has firmly been associated with one of the “camps” (referred to as

regularised risk and probabilistic in the sequel) with surprisingly little crosstalk or acknowledgments of prior work across this boundary. In this paper, we clarify the relationship between major regularised risk and probabilistic kernel learning techniques precisely, pointing out advantages and pitfalls of either, as well as algorithmic similarities leading to novel powerful algorithms.

We develop a common analytical and algorithmical framework encompassing approaches from both camps and provide clear insights into the optimisation structure. Even though, most of the optimisation is non convex, we show how to operate a provably convergent “almost Newton” method nevertheless. Each step is not much more expensive than a gradient based approach. Also, we do not require any foreign optimisation code to be available. Our framework unifies kernel learning for regression, robust regression and classification.

The paper is structured as follows: In section 2, we introduce the regularised risk and the probabilistic view of kernel learning. In increasing order of generality, we explain multiple kernel learning (MKL, section 2.1

2.2) and marginal likelihood maximisation (MLM, section 2.3). A taxonomy of the mutual relations between the approaches and important special cases is given in section 2.4. Section 3 introduces a general optimisation scheme and section 4 draws a conclusion.

Kernel-based algorithms come in many shapes, however, the primary goal is – based on training data {(xi,yi)|i=1..n}, xi∈X, yi∈Y and a parametrised kernel function kθ(x,x′) – to predict the output y∗ for unseen inputs x∗. Often, linear parametrisations kθ(x,x′)=∑Mm=1θmkm(x,x′) are used, where the km are fixed positive definite functions, and θ⪰0. Learning the kernel means finding θ to best support this goal. In general, kernel methods employ a postulated latent function u:X→R whose smoothness is controlled via the function space squared norm ∥u(⋅)∥2kθ. Most often, smoothness is traded against data fit, either enforced by a loss function ℓ(yi,u(xi)) or modeled by a likelihood P(yi|ui). Let us define kernel matrices Kθ:=[kθ(xi,xj)]ij, and Km:=[km(xi,xj)]ij in Rn×n

route to kernel prediction, which is followed by any support vector machine (SVM) or ridge regression technique, yields

∥u(⋅)∥2kθ+Cn∑ni=1ℓ(yi,ui) as criterion, enforcing smoothness of u(⋅) as well as good data fit through the loss function Cnℓ(yi,u(xi)). By the representer theorem, the minimiser can be written as u(⋅)=∑iαikθ(⋅,xi), so that ∥u(⋅)∥2kθ=α⊤Kθα (Schölkopf and Smola, 2002). As u=Kθα, the regularised risk problem is given by

A probabilistic viewpoint of the same setting is based on the notion of a Gaussian process (GP) (Rasmussen and Williams, 2006): a Gaussian random function u(⋅) with mean function E[u(x)]=m(x)≡0 and covariance function V[u(x),u(x′)]=E[u(x)u(x′)]=kθ(x,x′). In practice, we only use finite-dimensional snapshots of the process u(⋅): for example, P(u;θ)=N(u|0,Kθ), a zero-mean joint Gaussian with covariance matrix Kθ. We adopt this GP as prior distribution over u(⋅), estimating the latent function as maximum of the posterior process P(u(⋅)|y;θ)∝P(y|u)P(u(⋅);θ). Since the likelihood depends on u(⋅) only through the finite subset {u(xi)}, the posterior process has a finite-dimensional representation: P(u(⋅)|y,u)=P(u(⋅)|u), so that P(u(⋅)|y;θ)=∫P(u(⋅)|u)P(u|y;θ)du

is specified by the joint distribution

ignoring an additive constant. Minimising equations (1) and (2) for any fixed kernel matrix K gives the same minimiser ^u and prediction u(x∗)=^u⊤K−1θ[kθ(xi,x∗)]i.

however some loss functions cannot be interpreted as a negative log likelihood as shown in table (2) and as discussed for the SVM by Sollich (2000). If, the likelihood is a log-concave function of u, it corresponds to a convex loss function (Boyd and Vandenberghe, 2002, Sect. 3.5.1). Common loss functions and likelihoods for classification Y={±1} and regression Y=R are listed in table (2).

In this section, we derive a simple, provably convergent and efficient algorithm for MKL, joint MAP and VB. We use the Lagrangian form of equation (3) and ℓ(y,u):=−2lnP(y|u):

Many previous algorithms use alternating minimization, which is easy to implement but tends to converge slowly. Both ϕVB and ϕMAP are jointly convex up to the concave θ↦ln|Kθ| part. Since ln|Kθ|=minλ≻0λ⊤θ−f∗(λ) (Legendre duality, Boyd and Vandenberghe, 2002), joint MAP becomes minλ≻0,θ⪰0,uϕλ(θ,u) with ϕλ:=u⊤K−1θu+ℓ(y,u)+λ⊤θ−f∗(λ) which is jointly convex in (θ,u). Algorithm 1 iterates between refits of λ and joint Newton updates of (θ,u).

The Newton direction costs O(n3+Mn2), with n the number of data points and M the number of base kernels. All algorithms discussed in this paper require O(n3) time, apart from the requirement to store the base matrices Km. The convergence proof hinges on the fact that ϕ and ϕλ are tangentially equal (Nickisch and Seeger, 2009). Equivalently, the algorithm can be understood as Newton’s method, yet dropping the part of the Hessian corresponding to the ln|K| term (note that ∇(u,θ)ϕλ=∇(u,θ)ϕ for the Newton direction computation). Exact Newton for MKL.

In practice, we use Kθ=∑mθmKm+εI,ε=10−8 to avoid numerical problems when computing <