In this paper, we propose a Multiple Human Tracking method using multi-cues including Primitive Action Features (MHT-PAF). MHT-PAF can perform the accurate human tracking in dynamic aerial videos captured by a drone. PAF employs a global context, rich information by multi-label actions, and a middle level feature. The accurate human tracking result using PAF helps multi-frame-based action recognition. In the experiments, we verified the effectiveness of the proposed method using the Okutama-Action dataset. Our code is available online. 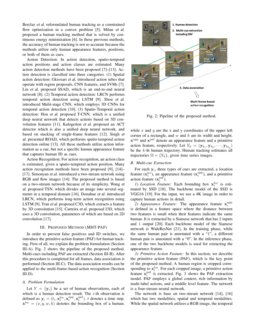 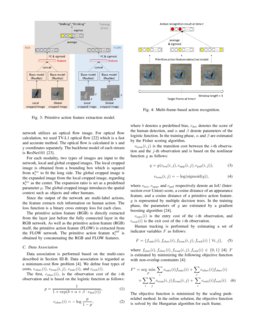 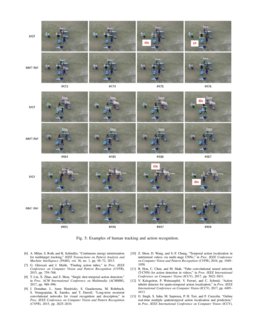 Automatic analysis of the video is one of most complex problems in the f...
Konstantin Sozykin, et al. ∙

There are multiple cues in an image which reveal what action a person is...
Georgia Gkioxari, et al. ∙

In aerial images captured by a drone, human tracking accuracy is not so accurate. i) significant change of human’s size and aspect ratio and ii) abrupt camera movement cause false positives and ID switches. ID switch means the target human ID changes to another ID. Although human tracking methods [2, 3, 4, 5, 6] utilize a human appearance feature, position, or both of them as cues, the false positive and ID switch frequently occur.

In this paper, we propose a Multiple Human Tracking method using multiple cues, including Primitive Action Features (MHT-PAF). Our idea is that an action cue is effective for each human’s tracking because a human action does not change frequently at the frame level. Fig. 1 shows the idea of the proposed method. Unlike previous methods (Fig. 1LABEL:sub@fig:idea1), the proposed method employs the action feature for human tracking (Fig. 1LABEL:sub@fig:idea2). For data association, the action feature needs to be extracted for each frame.

However, the frame-level feature works poorly because a human action occurs across multiple frames. Therefore, we designed the primitive action feature (PAF) in terms of the following three points:

proposed SSAD, which is an end-to-end neural network

Let Y={yi} be a set of human observations, each of which is a human detection result. The i-th observation is defined as yi=(ti,xloci,xappi,xpafi). t denotes a time step. xloc=(x,y,w,h) denotes the bounding box of a human. while x and y are the x and y coordinates of the upper left corner of a rectangle, and w and h are its width and height. xapp and xpaf denote an appearance feature and a primitive action feature, respectively. Let Yk=(yk1,yk2,⋯,yklk) be the k-th human trajectory. Human tracking estimates all trajectories Ω={Yk}, given time series images.

Each bounding box xloci is estimated by SSD [18]. The backbone model of the SSD is VGG16 [19]. For the input, we use a 4K image in order to capture human actions in detail.

The appearance feature xappi is defined in a feature space where the distance between two features is small when their features indicate the same human. It is extracted by a Siamese network that has 2 inputs and 1 output [20]. Each backbone model of the Siamese network is WideResNet [21]. In the training phase, while the same human pair is annotated with a “1”, a different human pair is annotated with a “0”. In the inference phase, one of the two backbone models is used for extracting the appearance feature.

In this section, we describe the primitive action feature (PAF), which is the key point of the proposed method. A human region is cropped corresponding to xloci. For each cropped image, a primitive action feature xpafi is extracted. Fig. 3 shows the PAF extraction model. PAF employs a global context, rich information by multi-label actions, and a middle level feature. The network is a four-stream neural network.

Since the output of the network are multi-label actions, the feature extracts rich information on human action. The loss function is a binary cross entropy loss for each class.

The first, cobsv(i), is the observation cost of the i-th observation and is based on the logistic function as follows:

where b denotes a predefined bias, cdet denotes the score of the human detection, and α and β denote parameters of the logistic function. In the training phase, α and β are estimated by the Fisher scoring algorithm.

is represented by multiple decision trees. In the training phase, the parameters of

are estimated by a gradient boosting algorithm

Human tracking is performed by estimating a set of indicator variables F as follows:

where fentr(i),fobsv(i),ftran(i,j),fexit(i)∈{0,1} [4]. F is estimated by minimizing the following objective function with non-overlap constraints [4]:

We conducted experiments of the human tracking in order to verify the effectiveness of the proposed human tracking method and its usefulness for the multi-frame-base action recognition.

We used an Okutama-Action dataset [25], which is an aerial view of a concurrent human action detection dataset. The dataset is very challenging because it includes significant changes in human’s size and aspect ratio, and abrupt camera movement, dynamic transition of multi-label actions. The dataset contains 43 videos and was split into the training (33 videos) and test data (10 videos). The videos are captured in 30 FPS, and 77,365 images in the dataset in total. Two drones captured 9 participants from a distance of 10-45 meters and camera angles of 45-90 degrees. The resolution of images is 4K (3,840×2,160). Each bounding box have one or more action labels. Twelve action labels are divided into three categories: human-to-human interactions (handshaking, hugging), human-to-object interactions (reading, drinking, pushing/pulling, carrying, calling), and no-interaction (running, walking, lying, sitting, standing). Multiple actions almost always consist of one no-interaction action and one action from the other two categories.

We evaluated the human tracking (Estimating xloc and f

). For the evaluation metric, we used Multiple Object Tracking Accuracy (MOTA). MOTA is a widely used and comprehensive metric using the following combination:

where FN, IDs, FP, and DET respectively denote the total number of false negatives, ID switches, false positives, and detections. The MOTA score ranges from −∞ to 100. More details about these metrics are described in paper [26]. The IoU threshold between ground truth and the estimated bounding box was set to 0.5.

We evaluated the multi-frame-based action recognition. For the evaluation metric, we used mean Average Precision (mAP). The mAP is used for the action detection task, which estimates xloc and a. The IoU threshold between ground truth and estimated bounding box was set to 0.5. Table II shows the result of multi-frame-based action detection. In DeepSORT and MCF, PAF was not utilized. The mAP in the case of MHT-PAF is higher than that of MCF (MCF: 11.97 vs. MHT-PAF: 12.54). This is due to the improvement in accuracy of human tracking using PAF.

Fig. 5 shows examples of human tracking and action recognition. For each bounding box, estimated human ID and actions are indicated. If the action recognition result is “Unknown”, it is not indicated in the image. #(number) denotes a frame ID. Fig. 5 shows examples of video 1.2.10. In MCF, ID switches (IDs) occur frequently (frame 475, 487, 497, and 498) and false positive (FP) occurs (frame 476). In MHT-PAF, these ID switches and false positive are prevented. PAF employs rich information on human action, and can avoid the miss of data association.

In this paper, we proposed a Multiple Human Tracking method using multi-cues including Primitive Action Features (MHT-PAF). PAF employs a global context, rich information from multi-label actions, and a middle level feature. Accurate human tracking using PAF can be applied to the multi-frame-based action recognition. In the experiments, we evaluated the proposed method using Okutama-Action dataset, which consists of aerial view videos. We verified that the human tracking accuracy (MOTA) improved 2.23. The number of ID switches decreased 110 and the precision improved 2.51 with retention of the recall. Due to the improvement in accuracy of human tracking, the action detection accuracy (mAP) improved 0.57. Also, we discussed the global cropped image and single/multi-frame-based action recognition. In the future, we will research the cooperative method that human tracking and action recognition work complementarily.