In this article we compare two multi-patch models for the spread of Zika virus based on an SIRUV model. When the commuting between patches is ceased we expect that all the patches follow the dynamics of the single patch model. We show in an example that the effective population size should be used rather than the population size of the respective patch. 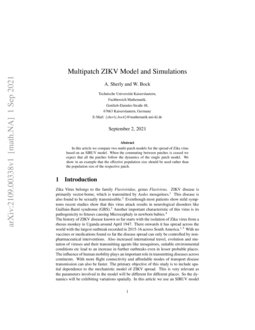 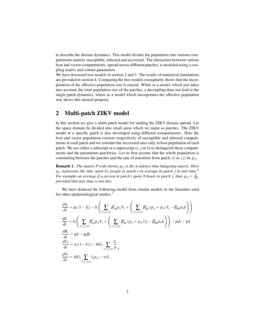 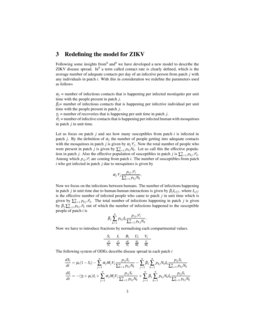 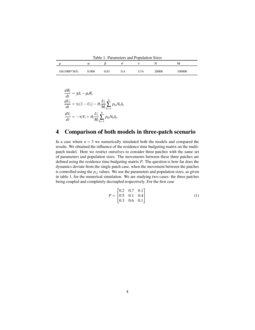 Is It Safe to Uplift This Patch? An Empirical Study on Mozilla Firefox

There have been different strategies to improve the performance of a mac...
Dongrui Wu, et al. ∙

On the Minimal Recognizable Image Patch

Con-Patch: When a Patch Meets its Context

Measuring the similarity between patches in images is a fundamental buil...
Yaniv Romano, et al. ∙

. ZIKV disease is primarily vector-borne, which is transmitted by

Aedes mosquitoes[1]. This disease is also found to be sexually transmissible[2]. Eventhough most patients show mild symptoms recent studies show that this virus attack results in neurological disorders like Guillain-Barré syndrome (GBS)[3]. Another important characteristic of this virus is its pathogenicity to fetuses causing Microcephaly in newborn babies[4]. The history of ZIKV disease known so far starts with the isolation of Zika virus from a rhesus monkey in Uganda around April 1947. There onwards it has spread across the world with the largest outbreak recorded in 2015-16 across South America[5, 1]

. With no vaccines or medications found so far the disease spread can only be controlled by non-pharmaceutical interventions. Also increased international travel, evolution and mutation of viruses and their transmitting agents like mosquitoes, suitable environmental conditions etc lead to an increase in further outbreaks even in lesser probable places. The influence of human mobility plays an important role in transmitting diseases across continents. With more flight connectivity and affordable modes of transport disease transmission can also be faster. The primary objective of this study is to include spatial dependence to the mechanistic model of ZIKV spread. This is very relevant as the parameters involved in the model will be different for different places. So the dynamics will be exhibiting variations spatially. In this article we use an SIRUV model to describe the disease dynamics. This model divides the population into various compartments namely susceptible, infected and recovered. The interaction between various host and vector compartments, spread across different patches, is modeled using a coupling matrix and certain parameters.

In this section we give a multi patch model for studing the ZIKV disease spread. Let the space domain be divided into small areas which we name as patches. The ZIKV model in a specific patch is also developed using different compartments. Here the host and vector population consists respectively of susceptible and infected compartments in each patch and we consider the recovered ones only in host population of each patch. We use either a subscript or a superscript (i, j or k) to distinguish these compartments and the parameters patchwise. Let us first assume that the whole population is commuting between the patches and the rate of transition from patch (i) to (j) be pij.

The matrix P with entries pij is the residence time budgeting matrix. Here pij represents the time spent by people in patch i on average in patch j in unit time[6]. For example on average if a person in patch i spent 8 hours in patch j, then pij=824, provided that unit time is one day.

We have deduced the following model from similar models in the literature used for other epidemiological studies[7].

3 Redefining the model for ZIKV

Now we have to introduce fractions by normalising each compartmental values.

4 Comparison of both models in three-patch scenario

In a case where n=3 we numerically simulated both the models and compared the results. We obtained the influence of the residence time budgeting matrix on the multi-patch model. Here we restrict ourselves to consider three patches with the same set of parameters and population sizes. The movements between these three patches are defined using the residence time budgeting matrix P. The question is how far does the dynamics deviate from the single patch case, when the movement between the patches is controlled using the pij values. We use the parameters and population sizes, as given in table 1, for the numerical simulation. We are studying two cases- the three patches being coupled and completely decoupled respectively. For the first case

The dynamics was supposed to be similar for the single patch and multi-patch models for the case P=I. But we have not seen this property for the old model.

In this study we have considered two different models to describe the dynamics of ZIKV spread. We compared the two models to identify the suitable model. When the commuting between patches is ceased we expect that all the three patches follow the dynamics of the single patch model. The first model failed to satisfy this condition where as the second model was successfully exhibiting this property. This gives rise to a more thorough study of the second model in a forthcoming work.