Snapshot mosaic multispectral imagery acquires an undersampled data cube by acquiring a single spectral measurement per spatial pixel. Sensors which acquire p frequencies, therefore, suffer from severe 1/p undersampling of the full data cube. We show that the missing entries can be accurately imputed using non-convex techniques from sparse approximation and matrix completion initialised with traditional demosaicing algorithms. In particular, we observe the peak signal-to-noise ratio can typically be improved by 2 to 5 dB over current state-of-the-art methods when simulating a p=16 mosaic sensor measuring both high and low altitude urban and rural scenes as well as ground-based scenes. 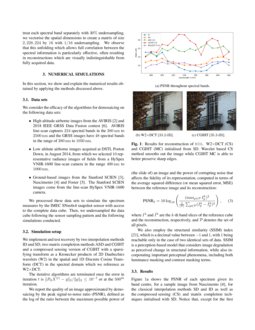 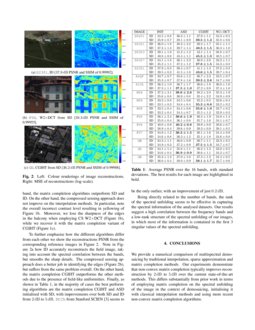 Matrix completion is a well-studied problem with many machine learning a...
Yu Cheng, et al. ∙

Deep geometric matrix completion: Are we doing it right?

We address the problem of reconstructing a matrix from a subset of its e...
Amit Boyarski, et al. ∙

Multispectral imaging is the process of recording 2D arrays of information at multiple spectra (frequencies). Having access to such a rich, three-dimensional data cube allows different materials to be distinguished due to their differing spectral emission profiles. As a result, multispectral imaging is used in applications ranging from landmine detection, precision agriculture, and medical diagnosis to name but a few of its application domains; for a partial survey see the January 2014 special issue of IEEE Signal Processing Magazine [1]. The increased sensor size and acquisition time are some of the central obstacles to the more widespread use of multispectral imagery.

Snapshot mosaic multispectral sensors allow for a compact video rate multispectral imaging by acquiring only a fraction of the multispectral cube. For example111We illustrate the architecture through the IMEC sensor, but note there are numerous similar sensors such as the S 137 system by CUBERT., the IMEC SNm4x4 records 16 bands at a rate of 340 frames per second on a spatial two-dimensional 2048×1088 pixel domain by only acquiring a single spectrum per pixel; specifically this is achieved by tiling the two-dimensional domain by 4×4 pixel supercells where each supercell acquires the spectra independently.

[2], Stanford SCIEN [3], Nascimento [4], Foster [5], IEEE GRSS Data Fusion Contest [6]. In addition to reviewing the existing state-of-the-art interpolation methods in Sec. 2.1, we demonstrate sparse approximation and matrix completion methods in Sec. 2.2 and 2.3 respectively, which we observe to substantially outperform the prior state-of-the-art. Over the above diverse data sets, we observe that non-convex compressed sensing and matrix completion methods initialised with traditional interpolations methods typically improve the peak signal-to-noise ratio by 2dB   to   5dB, see Table 1.

Demosaicing is the process by which the undersampled three-dimensional multispectral data cube has the missing entries approximated so as to simulate a full data acquisition. While most three-dimensional interpolations methods would be directly applicable, we consider a few methods previously used by the multispectral community, such as direct interpolation as described in Sec. 2.1 as well as sparse approximation regularisation methods in Sec. 2.2 and low-rank structure as presented in Sec. 2.3.

Mihoubi et al. [8] extended the SD approach to consider alternative ways to build correlations between the bands. In intensity difference (ID) they build spectral correlation by first constructing a spatial intensity map whose value at a pixel is the measurement for whichever spectra was measured at that spatial location, then this intensity map is averaged using a weighting based on the number of pixels per spectra contained in the averaging width. See Sec.3.2 for details on the choice of averaging used here and Mihoubi et al. [8] for a more general discussion. Hence, the difference between this averaged intensity map and the measurements for each spectrum is computed, the unknown values zero padded, and each band averaged such as in WB.

Interpolation methods designed in transform domains have been considered by Miao et al. [9] in the binary tree-based edge-sensing (BTES) method, which has the additional benefit of allowing for variable sampling densities per frequency band. However, we observe it is inferior to SD and ID described above in the setting of snapshot imaging. Pseudo-panchromatic image difference (PPID) [10] builds upon BTES and ID. However, due to the applicability of PPID to only some specific mosaic arrangements we leave comparison with our algorithms for a later time.

Sparse approximation inpainting allows one to easily consider the interpolation of the under-complete snapshot data cube in transforms more general than the linear interpolation of (WB). In particular, one can assume that the image is well approximated by a sparse representation in a suitable image domain and exploit this structure to reconstruct it from undersampled measurements [11, 12, 13], e.g. by solving

where Ψ represents the transform in which the data is known to be compressible and y is the full data cube projected by PΩ to the undersampled locations. Degraux et al. [14] apply this model to a reconstruction of multispectral imagery acquired by mosaic snapshot cameras.

The primary challenge lies in two aspects: (i) the significant subsampling ratio of 1/K, where K is the number of spectral bands, and (ii) the selection of the suitable transform Ψ. The first problem can be overcome by initialising the state-of-the-art sparse approximation algorithms for solving (1) with sufficiently accurate initial estimates, such as those from the classical interpolation methods described in Sec. 2.1. As it was pointed out in [14], we find that, for natural scenes captured by snapshot multispectral imaging, a Kronecker product of 2D wavelet transform spatially and the discrete cosine transform for the spectral dimension is an effective choice for the representation Ψ. In particular, the 2D wavelet transform spatially includes elements of nearly global support to allow broad correlations as well as local elements to express fine detail and the discrete cosine transform models the slowly varying values in the spectral dimension.

Rather than using local correlations, matrix (and tensor) completion exploit the correlation in the data cube through a low-rank structure, e.g. by solving

where y is the observed data, X is a matrix corresponding to an unfolding of the complete three-dimensional data cube, and PΩ is a restriction to the measured values as before.

Although the low-rank matrix completion problem is NP-hard in general (see [15] for a recent survey) there is a number of computationally fast solvers for the problem with provable convergence guarantees [16, 17, 18]. In fact, matrix completion has been previously applied to the reconstruction of subsampled multispectral imagery [19] by the Coded Aperture Snapshot Spectral Imager (CASSI) [20]. Here we show that matrix completion can be used also in the case of a more severe subsampling by snapshot mosaic camera designs if provided with suitable initialisation.

While there are many non-convex methods for matrix completion, we showcase two exemplary cases but expect that other non-convex methods would perform similarly well. We apply conjugate gradient iterative hard thresholding (CGIHT) [18] and alternating steepest descent (ASD) [17] to solve (2), providing them with an initial guess from either SD or ID. We show that both CGIHT and ASD can improve on the classical interpolation methods. This differs substantially from prior work both in terms of using more recent algorithms for matrix completion which have been shown to be more effective and initialising them with prior state-of-the-art interpolation methods, and moreover in that unlike [19] which treat each spectral band separately with 30% undersampling, we vectorise the spatial dimensions to create a matrix of size 2,228,224 by 16 with 1/16 undersampling. We observe that this unfolding which allows full correlation between the spectral information is particularly effective, often resulting in reconstructions which are visually indistinguishable from fully acquired data.

In this section, we show and explain the numerical results obtained by applying the methods discussed above.

We consider the efficacy of the algorithms for demosaicing on the following data sets:

We processed these data sets to simulate the spectrum measures by the IMEC SNm4x4 snapshot sensor with access to the complete data cube. Then, we undersampled the data cube following the sensor sampling pattern and the following simulations conducted.

We implement and test recovery by two interpolation methods ID and SD, two matrix completion methods ASD and CGIHT and a compressed sensing version of CGIHT with a sparsifying transform as a Kronecker products of 2D Daubechies wavelets (W2) in the spatial and 1D Discrete Cosine Transform (DCT) in the spectral domain which we reference as W2×DCT.

The iterative algorithms are terminated once the error in iteration t is ∥PΩX(t)−y∥2/∥y∥2≤10−7 or at the 500th iteration.

We report the quality of an image approximated by demosaicing by the peak signal-to-noise ratio (PSNR), defined as the log of the ratio between the maximum possible power of (the slide of) an image and the power of corrupting noise that affects the fidelity of its representation, computed in terms of the average squared difference (or mean squared error, MSE) between the reference image and its reconstruction:

where Ik and ^Ik are the k-th band slices of the reference cube and the reconstruction, respectively, and P denotes the set of all pixels.

We also employ the structural similarity (SSIM) index [21], which is a decimal value between −1 and 1, with 1 being reachable only in the case of two identical sets of data. SSIM is a perception-based model that considers image degradation as perceived change in structural information, while also incorporating important perceptual phenomena, including both luminance masking and contrast masking terms.

Figure 0(a) shows the PSNR of each spectrum given its band centre, for a sample image from Nascimento [4], for the classical interpolation methods SD and ID as well as the compressed sensing (CS) and matrix completion techniques initialised with SD. Notice that, except for the first band, the matrix completion algorithms outperform SD and ID. On the other hand, the compressed sensing approach does not improve on the interpolation methods. In particular, note the overall incorrect contrast level resulting in yellowing of Figure 0(b). Moreover, we lose the sharpness of the edges in the balcony when employing CS W2×DCT (Figure 0(b)), while we recover it with the matrix completion variant of CGIHT (Figure 0(c)).

To further emphasise how the different algorithms differ from each other we show the reconstructions PSNR from the corresponding reference images in Figure 2. Note in Figure 1(c) how ID accurately reconstructs the field image, taking into account the spectral correlation between the bands, but smooths the sharp details. The compressed sensing approach does a better job in identifying the edges (Figure 1(b)), but suffers from the same problem overall. On the other hand, the matrix completion CGIHT outperforms the other methods due to the presence of field-like uniformities.

Finally, as shown in Table 1, in the majority of cases the best performing algorithms are the matrix completion CGIHT and ASD initialised with SD, with improvements over both SD and ID from 2dB   to   5dB. StCh from Stanford SCIEN [3]

seems to be the only outlier, with an improvement of just