In this paper we develop a novel idea of multilinear cryptosystem using nilpotent group identities. 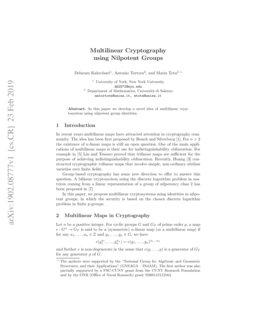 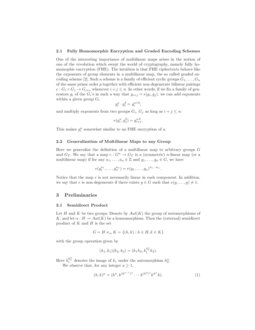 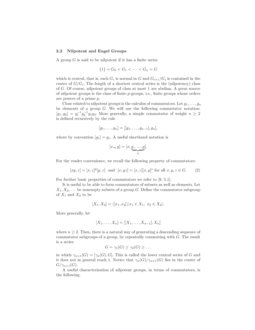 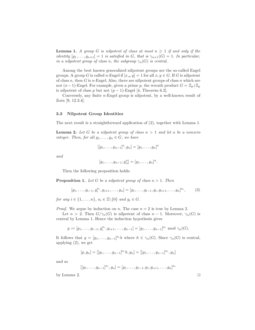 In this short note, we develop a novel idea of a bilinear cryptosystem u...
Ayan Mahalanobis, et al. ∙

This is a survey of algorithmic problems in group theory, old and new, m...
Vladimir Shpilrain, et al. ∙

A Closer Look at the Multilinear Cryptography using Nilpotent Groups

In a previous paper we generalized the definition of a multilinear map t...
Delaram Kahrobaei, et al. ∙

In recent years multilinear maps have attracted attention in cryptography community. The idea has been first proposed by Boneh and Silverberg [1]. For n>2 the existence of n-linear maps is still an open question. One of the main applications of multilinear maps is their use for indistinguishability obfuscation. For example in [5] Lin and Tessaro proved that trilinear maps are sufficient for the purpose of achieving indistinguishability obfuscation. Recently, Huang [3] constructed cryptographic trilinear maps that involve simple, non-ordinary abelian varieties over finite fields.

Group-based cryptography has some new direction to offer to answer this question. A bilinear cryptosystem using the discrete logarithm problem in matrices coming from a linear representation of a group of nilpotency class 2 has been proposed in [7].

In this paper, we propose multilinear cryptosystems using identities in nilpotent groups, in which the security is based on the chosen discrete logarithm problem in finite p-groups.

Let n be a positive integer. For cyclic groups G and GT of prime order p, a map e:Gn→GT is said to be a (symmetric) n-linear map (or a multilinear map) if for any a1,…,an∈Z and g1,…,gn∈G, we have

and further e is non-degenerate in the sense that e(g,…,g) is a generator of GT for any generator g of G.

One of the interesting importance of multilinear maps arises in the notion of one of the revolution which swept the world of cryptography, namely fully homomophic encryption (FHE). The intuition is that FHE ciphertexts behave like the exponents of group elements in a multilinear map, the so called graded encoding scheme [2]. Such a scheme is a family of efficient cyclic groups G1,…,Gn of the same prime order p together with efficient non-degenerate bilinear pairings e:Gi×Gj→Gi+j whenever i+j≤n. In other words, if we fix a family of generators gi of the Gi’s in such a way that gi+j=e(gi,gj), we can add exponents within a given group Gi

and multiply exponents from two groups Gi, Gj as long as i+j≤n:

This makes gai somewhat similar to an FHE encryption of a.

2.2 Generalization of Multilinear Maps to any Group

Notice that the map e is not necessarily linear in each component. In addition, we say that e is non-degenerate if there exists g∈G such that e(g,…,g)≠1.

Let H and K be two groups. Denote by Aut(K) the group of automorphisms of K, and let α:H→Aut(K) be a homomorphism. Then the (external) semidirect product of K and H is the set

with the group operation given by

Here khα21 denotes the image of k1 under the automorphism hα2.

We observe that, for any integer a≥1,

which is central, that is, each Gi is normal in G and Gi+1/Gi is contained in the center of G/Gi. The length of a shortest central series is the (nilpotency) class of G. Of course, nilpotent groups of class at most 1 are abelian. A great source of nilpotent groups is the class of finite p-groups, i.e., finite groups whose orders are powers of a prime p.

Close related to nilpotent groups is the calculus of commutators. Let g1,…,gn be elements of a group G. We will use the following commutator notation: [g1,g2]=g−11g−12g1g2. More generally, a simple commutator of weight n≥2 is defined recursively by the rule

where by convention [g1]=g1. A useful shorthand notation is

For the reader convenience, we recall the following property of commutators:

For further basic properties of commutators we refer to [9, 5.1].

It is useful to be able to form commutators of subsets as well as elements. Let X1,X2,… be nonempty subsets of a group G. Define the commutator subgroup of X1 and X2 to be

where n≥2. Then, there is a natural way of generating a descending sequence of commutator subgroups of a group, by repeatedly commuting with G. The result is a series

A useful characterization of nilpotent groups, in terms of commutators, is the following.

The next result is a straightforward application of (2), together with Lemma 1.

Let G be a nilpotent group of class n>1 and let a be a nonzero integer. Then, for all g1,…,gn∈G, we have

Then the following proposition holds:

Let G be a nilpotent group of class n>1. Then

We argue by induction on n. The case n=2 is true by Lemma 2.

Let n>2. Then G/γn(G) is nilpotent of class n−1. Moreover, γn(G) is central by Lemma 1. Hence the induction hypothesis gives

Therefore we can construct the multilinear map e:Gn→G given by

Similarly, given x∈G, we can consider the multilinear map e′:G(n−1)→G given by

Here we propose two multilinear cryptosystems based on the identity (3) in Proposition 1.

First we generalize the bilinear map which has been mentioned in [7], to multilinear (n-linear) map for n+1 users. Let A1,…,An+1 be the users with private exponents a1,…,an+1 respectively. Given an integer a≠0, the main formula on which our key-exchange protocol is based on, is an identity in a public nilpotent group G of class n>1 (see Proposition 1):

The key exchange works as follows:

Example: Trilinear Cryptography using Nilpotent Groups of class 3. Let A,B,C,D be the users with private exponents a,b,c,d respectively. The users A, B, C and D transmit in public channel

The key exchange works as follows:

The common key is [x,y,z]abcd.

Let G be a public nilpotent group of class n+1 which is not n-Engel (n≥1). Then there exist x,g∈G such that [x,ng]≠1. Suppose that n+1 users A1,…,An+1 want to agree on a shared secret key. Each user Aj selects a private nonzero integer aj, computes gaj and sends it to the other users. Then:

Hence, again by Proposition 1, each user obtains [x,ng]∏n+1j=1aj which is the shared key.

The security of our protocols is based on the discrete logarithm problem (DLP). The ideal platform group for our protocols must be a nonabelian nilpotent group of large order such that the nilpotency class is not too large and the DLP in such a group is hard.

5.1 The Complexity of DLP in Finite p-Groups

In [10], Sutherland has studied the DLP in finite abelian p-groups, and showed how to apply the algorithms for p-groups to find the structure of any finite abelian group.

In a series of papers by Mahalanobis, the DLP has been studied for finite p-groups but mostly for nilpotent groups of class 2 [6, 8]. In particular, in [7], Mahalanobis and Shinde proposed p-groups of class 2 in which the platform is not practical as showed by the authors.

Solving the DLP in finite p-groups of larger class is an interesting question. We consider a semidirect product of cyclic p-groups of well-defined orders, to make a nilpotent group and then computing the DLP in each factor.

Take q=2p3+1 where p and q are large primes. Let H=⟨h⟩ and K=⟨k⟩ be the subgroups of Z∗q of orders p2 and p3, respectively. Selecting a nontrivial endomorphism hα of K amounts to selecting a positive integer m<p3 such that khα=km. If m is relatively prime to p, then hα is actually an automorphism. Define G=H⋉αK where α:h↦hα is a homorphism from H to Aut(K) such that khα=kp+1. Assuming x,y∈G such that x=(1,k),y=(h,1), then we have for G the following presentation:

In particular G is a finite p-group of order p5 and nilpotency class 3, which is not 2-Engel.

The group G could be considered as a platform for Protocols I and II for 4 and 3 users, respectively. The appropriate choice of p and q is important to provide security and efficiency.

The bottom line is that the DLP in G can be reduced to DLP on its factors. We focus on the second component of the element on the right; an easy computation shows that it is equal to

Thus, if the adversary chooses a “direct” attack, by trying to recover the private exponent a, he/she will have to solve the DLP twice: first to recover (p+1)a−1p from k(p+1)a−1p, and then to recover a from (p+1)a.

Acknowledgment. The authors would like to thank Antoine Joux for interesting discussions and useful comments.