In this paper we develop an efficient Monte Carlo algorithm for estimating the expected information gain that measures how much the information entropy about uncertain quantity of interest θ is reduced on average by collecting relevant data Y. The expected information gain is expressed as a nested expectation, with an outer expectation with respect to Y and an inner expectation with respect to θ. The standard, nested Monte Carlo method requires a total computational cost of O(ε^-3) to achieve a root-mean-square accuracy of ε. In this paper we reduce this to optimal O(ε^-2) by applying a multilevel Monte Carlo (MLMC) method. More precisely, we introduce an antithetic MLMC estimator for the expected information gain and provide a sufficient condition on the data model under which the antithetic property of the MLMC estimator is well exploited such that optimal complexity of O(ε^-2) is achieved. Furthermore, we discuss how to incorporate importance sampling techniques within the MLMC estimator to avoid so-called arithmetic underflow. Numerical experiments show the considerable computational savings compared to the nested Monte Carlo method for a simple test case and a more realistic pharmacokinetic model. 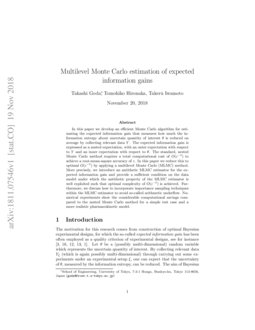 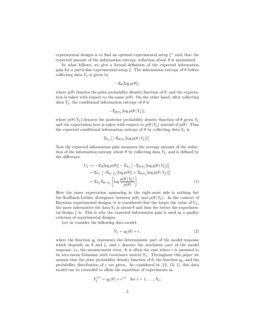 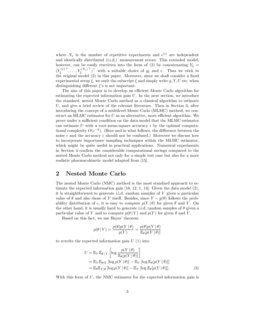 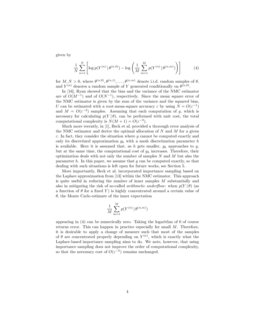 be a (possibly multi-dimensional) random variable which represents the uncertain quantity of interest. By collecting relevant data

In what follows, we give a formal definition of the expected information gain for a particular experimental setup ξ. The information entropy of θ before collecting data Yξ is given by

denotes the prior probability density function of

θ, and the expectation is taken with respect to the same p(θ). On the other hand, after collecting data Yξ, the conditional information entropy of θ is

θ given Yξ and the expectation here is taken with respect to p(θ|Yξ) instead of p(θ). Thus the expected conditional information entropy of θ by collecting data Yξ is

Now the expected information gain measures the average amount of the reduction of the information entropy about θ by collecting data Yξ, and is defined by the difference

, and the probability distribution of

ϵ are given. As considered in [12, 13, 1], this data model can be extended to allow the repetition of experiments as

where Ne is the number of repetitive experiments and ϵ(i) are independent and identically distributed (i.i.d.) measurement errors. This extended model, however, can be easily rewritten into the form of (2) by concatenating Yξ=(Y(1)⊤ξ,…,Y(Ne)⊤ξ)⊤ with a suitable choice of gξ and ϵ. Thus we stick to the original model (2) in this paper. Moreover, since we shall consider a fixed experimental setup ξ, we omit the subscript ξ and simply write g,Y,U etc. when distinguishing different ξ’s is not important.

The aim of this paper is to develop an efficient Monte Carlo algorithm for estimating the expected information gain U. In the next section, we introduce the standard, nested Monte Carlo method as a classical algorithm to estimate U, and give a brief review of the relevant literature. Then in Section 3, after introducing the concept of a multilevel Monte Carlo (MLMC) method, we construct an MLMC estimator for U as an alternative, more efficient algorithm. We prove under a sufficient condition on the data model that the MLMC estimator can estimate U with a root-mean-square accuracy ε by the optimal computational complexity O(ε−2). (Here and in what follows, the difference between the noise ϵ and the accuracy ε should not be confused.) Moreover we discuss how to incorporate importance sampling techniques within the MLMC estimator, which might be quite useful in practical applications. Numerical experiments in Section 4 confirm the considerable computational savings compared to the nested Monte Carlo method not only for a simple test case but also for a more realistic pharmacokinetic model adapted from [15].

The nested Monte Carlo (NMC) method is the most standard approach to estimate the expected information gain [16, 12, 1, 14]. Given the data model (2), it is straightforward to generate i.i.d. random samples of Y given a particular value of θ and also those of Y itself. Besides, since Y−g(θ) follows the probability distribution of ϵ, it is easy to compute p(Y|θ) for given θ and Y. On the other hand, it is usually hard to generate i.i.d. random samples of θ given a particular value of Y and to compute p(θ|Y) and p(Y) for given θ and Y.

Based on this fact, we use Bayes’ theorem

to rewrite the expected information gain U (1) into

With this form of U, the NMC estimator for the expected information gain is given by

, Ryan showed that the bias and the variance of the NMC estimator are of

O(M−1) and of O(N−1), respectively. Since the mean square error of the NMC estimator is given by the sum of the variance and the squared bias, U can be estimated with a root-mean-square accuracy ε by using N=O(ε−1) and M=O(ε−2) samples. Assuming that each computation of g, which is necessary for calculating p(Y|θ), can be performed with unit cost, the total computational complexity is N(M+1)=O(ε−3).

Much more recently, in [1], Beck et al. provided a thorough error analysis of the NMC estimator and derive the optimal allocation of N and M for a given ε. In fact, they consider the situation where g cannot be computed exactly and only its discretized approximation gh with a mesh discretization parameter h is available. Here it is assumed that, as h gets smaller, gh approaches to g, but at the same time, the computational cost of gh increases. Therefore, their optimization deals with not only the number of samples N and M but also the parameter h. In this paper, we assume that g can be computed exactly, so that dealing with such situations is left open for future works, see Section 5.

More importantly, Beck et al. incorporated importance sampling based on the Laplace approximation from [13] within the NMC estimator. This approach is quite useful in reducing the number of inner samples M substantially and also in mitigating the risk of so-called arithmetic underflow: when p(Y|θ) (as a function of θ for a fixed Y) is highly concentrated around a certain value of θ, the Monte Carlo estimate of the inner expectation

appearing in (4) can be numerically zero. Taking the logarithm of 0 of course returns error. This can happen in practice especially for small M. Therefore, it is desirable to apply a change of measure such that most of the samples of θ are concentrated properly depending on Y(n), which is exactly what the Laplace-based importance sampling aims to do. We note, however, that using importance sampling does not improve the order of computational complexity, so that the necessary cost of O(ε−3) remains unchanged.

In order to reduce the total computational complexity from O(ε−3) to O(ε−2), we consider applying a multilevel Monte Carlo (MLMC) method [4, 5]. The MLMC method has already been applied to estimate nested expectations of the form

Before introducing an MLMC estimator for the expected information gain, we give an overview of the MLMC method. Let P be a random output variable which cannot be sampled exactly, and let P0,P1,… be a sequence of random variables which approximate P with increasing accuracy but also with increasing cost. The problem here is to estimate E[P] efficiently.

For L∈Z>0 we have the following telescoping sum

The mean square error of ZMC is given by the sum of variance and squared bias:

The MLMC method, on the other hand, independently estimates each term on the right-hand side of (5). In general, if we have a sequence of random variables Z0,Z1,… which satisfy E[Z0]=E[P0] and E[Zℓ]=E[Pℓ−Pℓ−1] for ℓ∈Z>0, the MLMC estimator is given by

The mean square error of ZMLMC is

For the same underlying stochastic sample, Pℓ and Pℓ−1 can be well correlated and thus V[Zℓ] is expected to get smaller as the level ℓ increases. This means that, in order to estimate E[Zℓ] with a fixed root-mean-square accuracy, the necessary number of samples Nℓ decreases as ℓ increases, and, as a consequence, most of the number of samples are allocated on smaller levels for estimating E[PL]. Since the cost for each computation of Zℓ is assumed to be cheaper for smaller ℓ, the overall computational cost can be significantly reduced compared to the standard Monte Carlo method.

In his seminal work [4], Giles made this observation explicit as follows, see also a recent review [5]:

Let P be a random variable and let Pℓ denote the corresponding level ℓ approximation of P. If there exist independent random variables Zℓ with expected cost Cℓ and variance Vℓ, and positive constants α,β,γ,c1,c2,c3 such that α≥min(β,γ)/2 and

Here we introduce an MLMC estimator for the expected information gain. First let us define a random output variable

where Y is distributed conditionally on the random variable θ of the first term. It is obvious that P cannot be computed exactly because of the expectation Eθ[p(Y|θ)] appearing in the second term. We can introduce a sequence of approximations P0,P1,… of P with increasing accuracy but also with increasing cost as follows:

For ℓ>0, the simplest one is

where the first Mℓ−1 random samples of θ used in the second term is also used in the first term. However, according to [8, 2, 5, 6], we can consider a better “tight coupling” of Pℓ and Pℓ−1. Namely, the set of M02ℓ random samples of θ used to compute Pℓ is divided into two disjoint sets of M02ℓ−1 samples to compute two realizations of Pℓ−1, denoted by P(a)ℓ−1 and P(b)ℓ−1, respectively. In this way Zℓ is given by

for a randomly generated Y. Because of the independence of P(a)ℓ−1 and P(b)ℓ−1, we see that E[Zℓ]=E[Pℓ−Pℓ−1]. Moreover, it is important that the following “antithetic” property of Zℓ holds:

Due to the concavity of log, this Zℓ is always non-positive when ℓ≥1.

In this paper, we always consider the latter definition of Zℓ for ℓ>0. Our MLMC estimator for the expected information gain is given by (8) for L∈Z>0 and N0,…,NL∈Z>0 into which the above Zℓ is substituted. It is already clear from the construction of Zℓ that the parameter γ in Theorem 1 should be 1.

In this subsection we prove β>γ for Zℓ defined in (10), meaning that our MLMC estimator is in the first regime of Theorem 1, so that the total computational complexity is O(ε−2).

In order to prove the main theorem below, we need the following result.

Let X be a random variable with zero mean, and let ¯¯¯¯¯XN be an average of N i.i.d. samples of X. If E[|X|p] is finite for p≥2, there exists a constant Cp depending only on p such that

If there exists p∗≥4 such that

for all p≤p∗, we have

In what follows, we denote the indicator function for the event A by 1A and the complement of A by Ac. Using Hölder’s inequality, it holds that

for any m≤p∗. By taking an outer expectation with respect to Y, the tower property gives

Let us consider the term (E[|Zℓ|2p])1/p. Applying Jensen’s inequality and then the inequality logx≤x−1 which holds for any x>0, we have

As long as 2p≤p∗, it follows from Lemma 1 that

That is, we have

Let us move onto the second term of (12). For a particular value of Y, the second-order Taylor series expansion around p(Y) of each term of (10) is

Applying Jensen’s inequality twice and considering the respective ranges of ξ(a),ξ(b) and ξ(c), we obtain