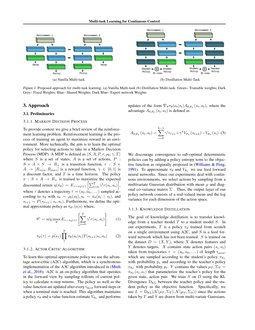 Currently, reinforcement learning algorithms are sample inefficient and learn from scratch through trail and error over millions of rollouts. This sample inefficiency is not a problem when the goal is to maximize performance on a single task in a simulated environment, where data is cheap and can be collected quickly. However, this inefficiency is not viable in real-world use cases when the goal is for an agent to accomplish many tasks, which may change over time. In addition to developing more efficient algorithms, one solution to this problem is to share knowledge between multiple tasks and develop flexible representations that can easily transfer to new tasks. In this work, we take a prerequisite step in this direction by evaluating the performance of the state-of-the-art multi-task learning methods on continuous action spaces using an extended version of the MuJoCo environment (Henderson et al., 2017). Analyzing the success of various multi-task methods on continuous control tasks is an important contribution because most research in this area has been on discrete action spaces in Atari environments.

In recent years, a number of works, most consistently from Deep Mind, have proposed methods for transfer learning and muli-task learning. These works primarily focus on two approaches: knowledge distillation and feature reuse. Knowledge distillation, originally proposed in

(Teh et al., 2017) applies distillation to the multi-task setting by learning a common (distilled) policy across a number of 3D environments. In addition, (Teh et al., 2017) adds an entropy penalty as well as KL and entropy regularization coefficients to the objective in order to trade off between exploration and exploitation. (Rusu et al., 2016b) attack the problem of catastrophic forgetting, where a policy losses the ability to preform a pre-transfer task after being transferred to a target task. Concretely, the authors prevent catastrophic forgetting by maintaining task specific representations within the policy network. The environments we use in our experiments were introduced in (Henderson et al., 2017). These environments extend the Mujoco continuous control tasks available in Open AI Gym and are designed to be a test bed for transfer learning and multi-task learning. For a given simulated agent, these environments provide minor structural variations such as the length of an agent’s body parts.

To provide context we give a brief review of the reinforcement learning problem. Reinforcement learning is the process of training an agent to maximize reward in an environment. More technically, the aim is to learn the optimal policy for selecting actions to take in a Markov Decision Process (MDP). A MDP is defined as

To learn this optimal approximate policy we use the advantage actor-critic (A2C) algorithm, which is a synchronous implementation of the A3C algorithm introduced in (Mnih et al., 2016). A2C is an on-policy algorithm that operates in the forward view by sampling rollouts of current policy to calculate n-step returns. The policy as well as the value function are updated after every tmax forward steps or when a terminal state is reached. This algorithm maintains a policy πθ

and a value function estimate

VθV and performs updates of the form ∇θπθ(at|st)Aθ,θV(st,at), where the advantage Aθ,θV(st,at) is defined as

We discourage convergence to sub-optimal deterministic policies can by adding a policy entropy term to the objective function as originally proposed in (Williams & Peng, 1991). To approximate πθ and VθV

we use feed forward neural networks. Since our experiments deal with continuous environments, we select actions by sampling from a multivariate Gaussian distribution with mean

Σ . Thus, the output layer of our policy network consists of a real-valued mean and the log variance for each dimension of the action space.

The goal of knowledge distillation is to transfer knowledge from a teacher model T to a student model S. In our experiments, T is a policy πθ trained from scratch on a single environment using A2C, and S is a feed forward network which has not been trained. S is trained on the dataset D=(X,Y), where X denotes features and Y denotes targets. X contains state action pairs (si,ai) taken from trajectories τ=(s0,a0,…) of length tmax, which are sampled according to the student’s policy πθS

ps and according to the teacher’s policy πθT with probability pt. Y contains the values μT,ΣT=πθT(si,ai) that parameterize the teacher’s policy for the given state, action pair. We train S on D using the KL Divergence DKL between the teacher policy and the student policy as the objective function. Specifically, we use L=DKL(N(μT,ΣT),N(μS,ΣS)) since the actions taken by T and S are drawn from multi-variate Gaussians. DKL is defined as follows:

We choose to use KL Divergence as our loss function because it was shown to perform well on discrete action spaces in (Rusu et al., 2016a)

To goal of multi-task learning is to train a policy network πθ that behaves optimally in n different environments E1,E2⋯En. In our multi-task experiments, we approximate the optimal policy using an actor network that is essentially a feed forward network that contains two hidden layers shared across all environments and n output layers (heads), where head hi produces the mean μi and covariance Σi that parameterize the Gaussian policy for environment Ei. We experiment with two methods for training πθ on multiple tasks:

The above 2 methods for multi-task learning are illustrated in figure 1.

. We evaluate the performance of a trained policy by reporting the mean and standard deviation of the cumulative reward across 20 sample rollouts on each target environment as done in

(Henderson et al., 2017). In addition, we plot the learning curves for each method in order to determine the sample efficiency of these approaches, which we provide in the appendix.

We use PyTorch to implement all our models. Our actor network and critic networks consist of 2 and 3 fully-connected layers respectively, each of which have 64 hidden units. Because the Mujoco environments we use are for continuous control each action taken by an agent is sampled from a Gaussian distribution parameterized by the mean and variance given by

. We use RMSprop with an initial learning rate of 0.0007 to train our models. We set the A2C hyper parameter

tmax=5 for all of our experiments. In addition, we use an entropy penalty coefficient of 0.01.

One of the simplest methods for multi-task learning is fine-tuning. For this, we first trained a policy with random initialization of weights for 5M frames on each environment separately. We then transferred this policy πθ to another environment by initializing its weights of a new network π′θ to the weights used in πθ and then fine-tuning the last layer of the actor and critic networks in π′θ for another 5M frames. We conducted our fine-tuning experiments on HalfCheetahSmallFoot-v0 and HalfCheetahSmallLeg-v0 and evaluated the results both at the 1M and 5M mark. The learning curves for all tasks are shown in Figure 2.The mean and standard deviation of the accumulated rewards calculated on 20 rollouts of the policy are tabulated in Table 1 for each combination of original and target environment.

From the table it is clear that although fine-tuning the weights of a pre-trained network on a new environment performs better than training from scratch, its performance degrades on the original environment. Thus it suffers from catastrophic forgetting, which makes it a poor choice for multi-task learning. For this reason, we did not explore all combinations of original and target environments and instead focus on other types of multi-task learning, which we discuss below.

In the vanilla multi-task experiment, we train a six head actor network and a six head critic network on each environment. Initial hidden layers are shared across environments, while output layers are unique to each environment’s head as shown in Fig. 1. The training procedure is as follows, first sample rollouts from E1 are collected and the head corresponding to the environment E1 is trained, similarly E2 and so on. the environments are continuously cycled in this manner until each head is trained for 1M frames. All results are tabulated in 2. As clearly visible, the vanilla multi-task outperforms not only distillation multi-task but also networks trained from scratch on a single environment. This shows that sharing knowledge across multiple tasks helps the network perform better on each individual task as well re-affirming our original motivation for this work. In addition, it also helps train the network faster and achieves comparable performance in just 1M frames as compared to the 3M frames.

In this paper, we experiment with two different methods for multi-task learning for continuous control. We show that an agent that is trained simultaneously to perform on multiple tasks is not only able to generalize better on each individual task but also requires fewer training steps to achieve comparable performance. This has a huge advantage since most of the real-world environments are continuous and sampling large numbers of episodes from them can be difficult. More sophisticated techniques could be developed that use a reinforcement learning policy to select environments to sample episodes from, which are likely to help the network focus on more difficult tasks and train faster. We hope our methods can serve as benchmark for future work in this field.

We have provided all the trained model weights and codes at https://github.com/jasonkrone/elen6885-final-project

The authors would like to thank Prof. Chong Li for sharing his knowledge and the Teaching Assistants– Lingyu Zhang, Chen-Yu Yen and Xing Yuan for their constant support through out the course.