Time series forecasting gets much attention due to its impact on many practical applications. Higher-order neural network with recurrent feedback is a powerful technique which used successfully for forecasting. It maintains fast learning and the ability to learn the dynamics of the series over time. For that, in this paper, we propose a novel model which is called Ridge Polynomial Neural Network with Error-Output Feedbacks (RPNN-EOFs) that combines the properties of higher order and error-output feedbacks. The well-known Mackey-Glass time series is used to test the forecasting capability of RPNN-EOFS. Simulation results showed that the proposed RPNN-EOFs provides better understanding for the Mackey-Glass time series with root mean square error equal to 0.00416. This result is smaller than other models in the literature. Therefore, we can conclude that the RPNN-EOFs can be applied successfully for time series forecasting. 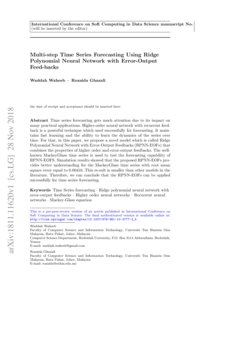 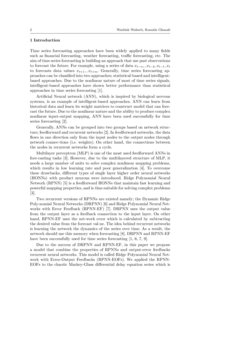 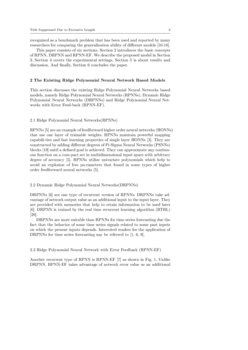 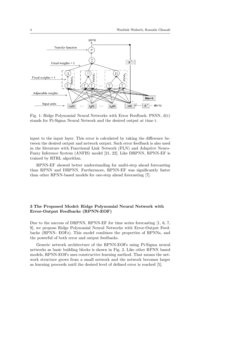 Artificial Neural network (ANN), which is inspired by biological nervous systems, is an example of intelligent-based approaches. ANN can learn from historical data and learn its weight matrices to construct model that can forecast the future. Due to the nonlinear nature and the ability to produce complex nonlinear input-output mapping, ANN have been used successfully for time series forecasting [2].

Multilayer perceptron (MLP) is one of the most used feedforward ANNs in fore-casting tasks [3]. However, due to the multilayered structure of MLP, it needs a large number of units to solve complex nonlinear mapping problems, which results in low learning rate and poor generalization [4]. To overcome these drawbacks, different types of single layer higher order neural networks (HONNs) with product neurons were introduced. Ridge Polynomial Neural Network (RPNN) [5] is a feedforward HONNs that maintain fast learning and powerful mapping properties, and is thus suitable for solving complex problems [3].

Two recurrent versions of RPNNs are existed namely; the Dynamic Ridge Poly-nomial Neural Networks (DRPNN) [6] and Ridge Polynomial Neural Networks with Error Feedback (RPNN-EF) [7]. DRPNN uses the output value from the output layer as a feedback connection to the input layer. On other hand, RPNN-EF uses the net-work error which is calculated by subtracting the desired value from the forecast val-ue. The idea behind recurrent networks is learning the network the dynamics of the series over time. As a result, the network should use this memory when forecasting [8]. DRPNN and RPNN-EF have been successfully used for time series forecasting [1, 6, 7, 9].

Due to the success of DRPNN and RPNN-EF, in this paper we propose a model that combine the properties of RPNNs and output-error feedbacks recurrent neural networks. This model is called Ridge Polynomial Neural Network with Error-Output Feedbacks (RPNN-EOFs). We applied the RPNN-EOFs to the chaotic Mackey-Glass differential delay equation series which is recognized as a benchmark problem that has been used and reported by many researchers for comparing the generalization ability of different models [10-18].

This paper consists of six sections. Section 2 introduces the basic concepts of RPNN, DRPNN and RPNN-EF. We describe the proposed model in Section 3. Section 4 covers the experimental settings. Section 5 is about results and discussion. And finally, Section 6 concludes the paper.

RPNNs [5] are an example of feedforward higher order neural networks (HONNs) that use one layer of trainable weights. RPNNs maintain powerful mapping capabili-ties and fast learning properties of single layer HONNs [3]. They are constructed by adding different degrees of Pi-Sigma Neural Networks (PSNNs) blocks [19] until a defined goal is achieved. They can approximate any continuous function on a com-pact set in multidimensional input space with arbitrary degree of accuracy [5]. RPNNs utilize univariate polynomials which help to avoid an explosion of free pa-rameters that found in some types of higher order feedforward neural networks [5].

DRPNNs [6] are one type of recurrent version of RPNNs. DRPNNs take advantage of network output value as an additional input to the input layer. They are provided with memories that help to retain information to be used later [6]. DRPNN is trained by the real time recurrent learning algorithm (RTRL) [20].

Another recurrent type of RPNN is RPNN-EF [7] as shown in Fig. 1. Unlike DRPNN, RPNN-EF takes advantage of network error value as an additional input to the input layer. This error is calculated by taking the difference between the desired output and network output. Such error feedback is also used in the literature with Functional Link Network (FLN) and Adaptive Neuro-Fuzzy Inference System (ANFIS) model [21, 22]. Like DRPNN, RPNN-EF is trained by RTRL algorithm.

Due to the success of DRPNN, RPNN-EF for time series forecasting [1, 6, 7, 9], we propose Ridge Polynomial Neural Networks with Error-Output Feedbacks (RPNN- EOFs). This model combines the properties of RPNNs, and the powerful of both error and output feedbacks.

Generic network architecture of the RPNN-EOFs using Pi-Sigma neural networks as basic building blocks is shown in Fig. 2. Like other RPNN based models, RPNN-EOFs uses constructive learning method. That means the network structure grows from a small network and the network becomes larger as learning proceeds until the desired level of defined error is reached [5].

RPNN-EOFs is trained by RTRL algorithm. The output of RPNN-EOFs, which is denoted by y(t), is calculated as follows:

where Pi(t) is the output of Pi-Sigma block, σ is the transfer function, hj(t) is the net sum of the sigma unit j, w0j is the bias, wgj is the weights between input and sigma units, and Z(t) is the inputs which given as follow:

where d is the desired output and y is the predicted output. At every time t, the weights changes are calculated as follows:

where η is the learning rate. The value of ∂E(t)∂wgl is determined as:

For simplification, the initial values for DYgl(t)=0, and e(t)=y(t)=0.5 to avoid zero value of DYgl(t). Then the weights updating rule is derived by substituting Equation (15) and Equation (8) into Equation (6), we have

Then, substituting Equation (16) into Equation (5), we have

In this paper, we used the well known chaotic Mackey-Glass differential delay equa-tion series. This series is recognized as a benchmark problem that has been used and reported by many researchers for comparing the generalization ability of different models [10-18]. Mackey-Glass time series is given by the following delay differential equation:

where τ is the time delay. We chose the following values for the variables α=0.2, β=−0.1, x(0)=1.2, and τ=17. With this setting the series produce chaotic behavior. One thousand data point were generated. The first 500 points of the series were used as a training sample, while the remaining 500 points were used as out-of-sample data. We used four input variables x(t),x(t−6),x(t−12),x(t−18) to predict x(t+6). All these settings were used for fair comparison with other studies in the literature [10-18].

We scaled the points to the range [0.2, 0.8] to avoid getting network output too close to the two endpoints of sigmoid transfer function [1]. We used the minimum and maximum normalization method which is given by:

where x refers to the observed (original) value, ˙x is the normalized version of x, min1, and max1 are the respective minimum and maximum values of all observations, and min2, and max2 refer to the desired minimum and maximum of the new scaled series.

The topology of the RPNN-EOFs that we used is shown in Table 1. Most of the settings are either based on the previous works with RPNN based models that found in the literature [1, 6, 7, 9] or by trial and error.

Because we aim to compare our proposed model’s performance with other models in the literature, we used the Root Mean Squared Error (RMSE) metric. RMSE is the standard metric wich used by many researchers with Mackey-Glass series [10-18]. The equation for RMSE is given by:

For fair comparison with recent studies, we de-normalized the results of RPNN-EOFs model. Table 2 lists the generalization capabilities of other methods [10-18]. The generalization capabilities were measured by applying each model to forecast the out-of-sample data. The results show that the proposed RPNN-EOFs model offers a smaller RMSE than the other models. Based on these results, we can conclude that the RPNN-EOFs alone provides better understanding for the series and smaller error in comparison to other models.

This paper investigated the forecasting capability of the Ridge Polynomial Neural Network with Error-Output Feedbacks (RPNN-EOFs) for multi-step time series fore-casting. The well-known Mackey–Glass differential delay equation was used to test the forecasting capability of RPNN-EOFs. Simulation results showed that the pro-posed RPNN-EOFs provides better understanding for the Mackey–Glass time series and smaller error in comparison to other models in the literature. Therefore, we can conclude that the RPNN-EOFs can be applied successfully for time series forecasting. The future works will be using more time series to ensure the good performance of the proposed model.

The authors would like to thank Universiti Tun Hussein Onn Malaysia (UTHM) and Ministry of Higher Education (MOHE) Malaysia for financially supporting this re-search under the Fundamental Research Grant Scheme (FRGS), Vote No. 1235.

13. Aizenberg I, Luchetta A, Manetti S.: A modified learning algorithm for the multilayer neural network with multi-valued neurons based on the complex QR decomposition, Soft Comput., 1;16(4), 563-75, (2012)