Lung nodule classification is a class imbalanced problem because nodules are found with much lower frequency than non-nodules. In the class imbalanced problem, conventional classifiers tend to be overwhelmed by the majority class and ignore the minority class. We therefore propose cascaded convolutional neural networks to cope with the class imbalanced problem. In the proposed approach, multi-stage convolutional neural networks that perform as single-sided classifiers filter out obvious non-nodules. Successively, a convolutional neural network trained with a balanced data set calculates nodule probabilities. The proposed method achieved the sensitivity of 92.4% and 94.5 at 4 and 8 false positives per scan in Free Receiver Operating Characteristics (FROC) curve analysis, respectively. 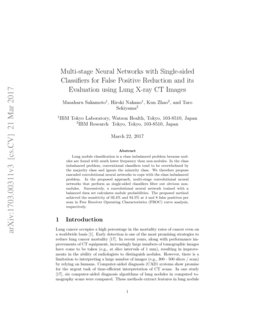 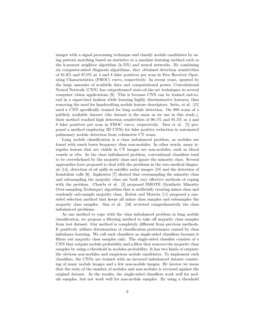 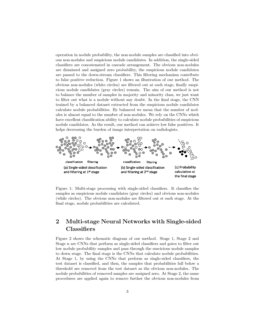 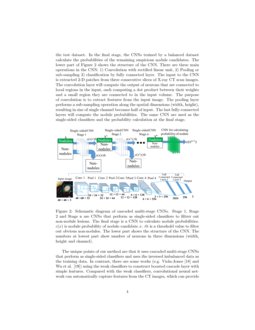 Lung cancer occupies a high percentage in the mortality rates of cancer even on a worldwide basis [1]. Early detection is one of the most promising strategies to reduce lung cancer mortality [17]. In recent years, along with performance improvements of CT equipment, increasingly large numbers of tomographic images have come to be taken (e.g., at slice intervals of 1 mm), resulting in improvements in the ability of radiologists to distinguish nodules. However, there is a limitation to interpreting a large number of images (e.g., 300 - 500 slices / scan) by relying on humans. Computer-aided diagnosis (CAD) systems show promise for the urgent task of time-efficient interpretation of CT scans. In one study [17]

, six computer-aided diagnosis algorithms of lung nodules in computed tomography scans were compared. These methods extract features in lung nodule images with a signal processing technique and classify nodule candidates by using pattern matching based on statistics or a machine learning method such as the k-nearest neighbor algorithm (k-NN) and neural networks. By combining six computer-aided diagnosis algorithms, they obtained detection sensitivities of 81.6% and 87.0% at 4 and 8 false positives per scan in Free Receiver Operating Characteristics (FROC) curve, respectively. In recent years, spurred by the large amounts of available data and computational power, Convolutional Neural Network (CNN) has outperformed state-of-the-art techniques in several computer vision applications

[9]. This is because CNN can be trained end-to-end in a supervised fashion while learning highly discriminative features, thus removing the need for handcrafting nodule feature descriptors. Setio, et al. [15] used a CNN specifically trained for lung nodule detection. On 888 scans of a publicly available dataset (the dataset is the same as we use in this study.), their method reached high detection sensitivities of 90.1% and 91.5% at 4 and 8 false positives per scan in FROC curve, respectively. Dou et al. [5] proposed a method employing 3D CNNs for false positive reduction in automated pulmonary nodule detection from volumetric CT scans.

Lung nodule classification is a class imbalanced problem, as nodules are found with much lower frequency than non-nodules. In other words, many irregular lesions that are visible in CT images are non-nodules, such as blood vessels or ribs. In the class imbalanced problem, conventional classifiers tend to be overwhelmed by the majority class and ignore the minority class. Several approaches have proposed to deal with the problems in the rare medical diagnosis [14], detection of oil spills in satellite radar images [10] and the detection of fraudulent calls [6]. Japkowicz [7] showed that oversampling the minority class and subsampling the majority class are both very effective methods of coping with the problem. Chawla et al. [3] proposed SMOTE (Synthetic Minority Over-sampling Technique) algorithm that is artificially creating minor class and randomly sub-sample majority class. Kubat and Matwin [11] proposed a one-sided selection method that keeps all minor class samples and subsamples the majority class samples. Sun et al. [16] reviewed comprehensively the class imbalanced problems.

shows the structure of the CNN. There are three main operations in the CNN: 1) Convolution with rectified linear unit, 2) Pooling or sub-sampling 3) classification by fully connected layer. The input to the CNN is extracted 2-D patches from three consecutive slices of X-ray CT scan images. The convolution layer will compute the output of neurons that are connected to local regions in the input, each computing a dot product between their weights and a small region they are connected to in the input volume. The purpose of convolution is to extract features from the input image. The pooling layer performs a sub-sampling operation along the spatial dimensions (width, height), resulting in size of single channel becomes half of input. The last fully-connected layers will compute the nodule probabilities. The same CNN are used as the single-sided classifiers and the probability calculation at the final stage.

The unique points of our method are that it uses cascaded multi-stage CNNs that perform as single-sided classifiers and uses the inversed imbalanced data as the training data. In contrast, there are some works (e.g. Viola-Jones [18] and Wu et al. [19]) using the weak classifiers to construct boosted cascade layer with simple features. Compared with the weak classifiers, convolutional neural network can automatically capture features from the CT images, which can provide higher accuracy for the detection results. As for the cascaded CNN structure, Li et al. [12]

[13, 8] and other kind of image feature detection [4] can also be found in other works. However, class imbalanced problem is not addressed in these works.

We use the lung CT scan dataset obtained from Lung Nodule Analysis 2016 [2]. This set includes 888 CT scan images along with annotations that were collected during a two-phase annotation process overseen by four experienced radiologists. Each radiologist marked lesions they identified as non-nodule, nodule < 3 mm, and nodule ≥ 3 mm. The dataset consists of all nodules ≥ 3 mm accepted by at least 3 out of 4 radiologists. The complete dataset is divided into ten subsets to be used for the 10-fold cross-validation. For convenience, the corresponding class label (0 for non-nodule and 1 for nodule) for each candidate is provided. 1,348 lesions are labeled as nodules and the other 551,062 are non-nodule lesions. In this study, center coordinates of each lesion are given. Examples of non-nodule and nodule images in the dataset are given in Figure 3. We use three consecutive slices to obtain volumetric information. Each image size cropped from CT scan images is 48 pixels × 48 pixels with a central on the nodule candidate.

The model of single-sided classifiers and the final stage classifiers are trained and validate by 10-fold cross-validation. In the cross-validation, eight subsets are used for training, and one subset is used for calculating accuracy of each models. The remaining subset is used for testing the dataset. 10 CNN models are made by using the holdout procedures. To make the training dataset for the single-sided classifiers, non-nodule samples in a subset are subsampled to 50 samples, and nodule samples are oversampled nine times by randomly rotating and scaling original images. As the result, the number of nodules is about twenty four times the number of non-nodules in the training dataset. In the learning loops of the single-sided classifiers, CNN models having the best nodule classification accuracy over all learning epochs are stored. There are 20 epochs in each training. In the test phase of single-sided classifiers, if the probability value of a nodule candidate falls below a specific threshold value, it is classified as an obvious non-nodule, and removed from the subset and assigned zero probability. The threshold value is determined from a standard deviation

For performance comparison, the same CNNs is trained and tested by using the same dataset in manner of the 10-fold cross-validation. We call this conventional method as “baseline”. The CNNs are trained using a balanced dataset with subsampled non-nodules and oversampled nodules. The all nodule samples are oversampled nine times by randomly rotating and scaling original images and non-nodules are subsampled to balance the number of nodule samples. In the training phase, the CNN models having the best classification accuracy over all learning epochs are stored.

In this paper, we have presented cascaded multi-stage neural networks with single-sided classifiers to reduce the false positives of lung nodule classification in CT scan images. We have shown that the proposed method achieves better results in the false positive reduction in comparison with a conventional CNN approach and other approaches. This results present nodule candidates with nodule probabilities to radiologists, which suggests that the system can decrease the burden of image interpretation on radiologists. However, with respect to this detailed theory, there are several unsolved questions. For example, we cannot explain why the average sensitivities of 12:1 and 24:1 fluctuates from stage to stage, and why the 3 stage of 24:1 ratio has the best performance. We will address these questions by the theoretical studies.