Recently machine learning algorithms based on deep layered artificial neural networks (DNNs) have been applied to a wide variety of high energy physics problems such as jet tagging or event classification. We explore a simple but effective preprocessing step which transforms each real-valued observational quantity or input feature into a binary number with a fixed number of digits. Each binary digit represents the quantity or magnitude in different scales. We have shown that this approach improves the performance of DNNs significantly for some specific tasks without any further complication in feature engineering. We apply this multi-scale distributed binary representation to deep learning on b-jet tagging using daughter particles' momenta and vertex information. 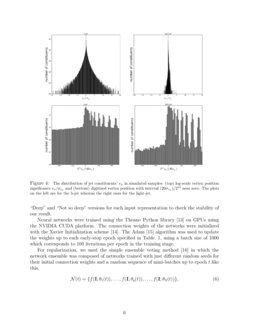 In the most recent machine learning, deep-layered artificial neural networks (DNNs) have been successfully applied to wide range of physics problems from phase transitions in statistical mechanics

[1, 2] to quark/gluon jet discrimination in high energy physics [3]. However, since there are no comprehensive rules or principles by which we can select a particular architecture or the input features of the network model for the corresponding tasks, the so called hyper-parameters determining the architecture of the networks and the overall learning processes are examined by pain-stacking trials and errors for a given set of input features. The resulting parameters for the networks are believed to be optimal, but they are too specific to be applied for other similar tasks. So for these similar tasks, trials and errors often need to be repeated.

However, if we use good input features or representations for DNNs, we can reduce the repetitions, since the good input features help DNNs to learn good internal representations [4, 5] with less dependence on its detailed architectures. Our investigation stems from a following simple question: what happens if one uses multiple variables with smaller dynamic range instead of one variable with large dynamic range as an input feature? We have tested this with a simple model. We designed a network to predict the sign of the sum of the spin states on a 3×3 block within a 10×10 lattice of random spins provided with the coordinates of center of the block limited within inner 8×8 lattice as shown in Fig. 1

. The network had to find out what the uniformly distributed input variables for coordinates of block center site meant and how to process them to perform the task, as this was not coded in explicitly. In this setting, when we provided the network with a binary representation of the site coordinate, for example (

011,100) instead of (3,4), the network learned more quickly and its training and test error were less as shown on the Fig. 1b. We can consider that this phenomenon is caused by the increased sparsity resulting from transforming the input values from a large base range to a smaller base (see Fig. 8 for the related discussion), having a distributed representation [4, 5] simply implemented with a number of binary digits for each input value in this case.

Inspired by these findings, we transformed each real-valued feature of jet constituents to a k-number of binary digits as the input features of deep neural networks for b-jet tagging [6] to test whether this simple preprocessing can improve the performance of the networks on a harder problem. We could implement the multi-scale distributed (MSD) representation in various ways, but the representation with k-number of binary digits (MSD2 k-digits) is the simplest and convenient one. Thus we studied only this binary implementation, which shall be denoted as MSD2 k-digits or simply MSD k-digits from now on.

In section 2, we will describe briefly data set used in this work, before exploring the detailed preprocessing of jet data and MSD digit representation. Section 3 covers the network architectures and its learning processes, and section 4 presents the results followed by our concluding remarks.

To test the improvement of the MSD representational algorithm against the typically used real-valued ones on b-jet tagging, we generated t¯t events in pp collisions at √s=13 TeV using the next leading order POWHEG [9] event generator matched to PYTHIA8 [7] for hadronization. Jets with transverse momentum pT>30 GeV and pseudo rapidity |η|<2.4 with at least two daughter constituents are selected. We used FastJet [8] with the anti-kT algorithm [11] with a jet radius R=0.4 for jet finding and clustering. We used Delphes for fast detector simulation [10]. We did not separated samples by pT range of jet for quick and simple test of MSD representation.

We used only jets initiated from light partons such as up, down, strange quarks and gluon (light-jet) for background. The number of b-jets and light-jets used in this study are the same, each with 70k samples. The total 140k jet samples are divided into a training set (Dtrain) of 100k samples, with a early validation set (Dvalidation) of 10k samples for early-stop to be collectively applied to all member networks and test set (Dtest) of 30k samples for the final performance evaluation.

We used the jet constituent’s relative transverse momentum ratio and it’s vertex positions as input features (rpT,vx,vy,vz). Jets have different number of its constituents or particles. We used a fully connected feed forward networks which take a fixed number of variables for its input, so we truncated the sequence of jet constituents variables up to the 50th constituent. And if the number of jet constituents n is less than 50, we set rest values to zeros. So, x=(x1,x2,x3,x4,…,xi,…,x199,x200) represents the following data structure,

where upper index represents the order of jet constituent in some rule, e.g. ordering by pT.

Before transforming the sequence of jet constituents variables x to MSD k-digit representation, zero-centering and normalization processes are performed to adjust the dynamic ranges of each component. This data-oriented processed representation will be called real-valued representation and it is defined as follows:

Fig. 2 shows distributions of ratio rpT of constituent’s pconst.T to jet pjetT, constituent vx, and vz before and after the normalization process (1).

Transforming the real-valued representation, u, to MSD2 k-digit representation can be simply performed by converting decimal numbers to binary digits with signed magnitude representation after clipping and rounding process as follows:

In this study, we used a fully connected neural network (FCN) for b-jet tagging. The schematic architecture of this network is shown in Fig. 5

[12] for all units h(l)i’s in each hidden layer indexed by the superscript l and the softmax function for two output units o1 and o2. The categorical cross-entropy is used as the cost function for the training.

Below are input units for each of the real-valued jet constituent features and its corresponding MSD 16-digit representation.

[13] on GPUs using the NVIDIA CUDA platform. The connection weights of the networks were initialized with the Xavier Initialization scheme [14]. The Adam [15]

algorithm was used to update the weights up to each early-stop epoch specified in Table.

1, using a batch size of 1000 which corresponds to 100 iterations per epoch in the training stage.

For regularization, we used the simple ensemble voting method [16] in which the network ensemble was composed of networks trained with just different random seeds for their initial connection weights and a random sequence of mini-batches up to epoch t like this,

and the ensemble vote was defined as

where f is the network model, θq(t)’s represent the connection weights and biases updated up to epoch t, with different initialization and mini-batch sequence Dtrainq(t)={dq(0),dq(1),…,dq(t)} by random seed with index q, and S is size of the ensemble of networks. We also used L2 penalty [17] and early-stop method together with previously mentioned ensemble method. The early stop was determined by inspecting networks learning progress plot obtained by try-out learning up to 30 epochs (Fig. 6), to find the epoch at which the mean of validation errors by 20 member networks (try-out ensemble size Stry−out=20) become stagnated, with the ensemble mean error as below at epoch t,

where Efq[D] represent prediction error rate by member network f(I;θq(t)) of ensemble N for data set D at epoch t. Table. 1 shows the summary of the architectures and parameters on regularization.

We demonstrated that a simple transformation from each real-valued input feature to MSD digit representation can lead to a large improvement in the fully connected networks for b-jet tagging without any additional domain specific feature engineering.

In typical network optimization, one has to examine broad range of hyper-parameters, such as network depth, number of units per layer and regularization parameters. We have shown that our results from two groups of networks, “Deep” and “Not so deep”, are not sensitive to such parameters.

Compared with a typical binary transformation, our MSD conversion described in Eqs. (2) and (3) from the real-valued feature to signed binary digits reflects the multi-scale property of the original data. For example, typical two’s complement representation converts decimal digits (−3,−2,−1,0,1,2,3) to (101,110,111,000,001,010,011), while our signed binary representation converts to (111,110,101,000,001,010,011). Our choice not only strengthens the multi-scale property but also makes the result information-theoretically effective. For instance, this is because (111), two’s complement of −1, activates excessive input units compared with the signed representation of (101).

In this note, we limit our study of the MSD digit representation to the problem of b-jet tagging. However our method can be straightforwardly applied to many other areas of deep learning problems. Further investigation is required in this direction.