Multi-person pose estimation is an important but challenging problem in computer vision. Although current approaches have achieved significant progress by fusing the multi-scale feature maps, they pay little attention to enhancing the channel-wise and spatial information of the feature maps. In this paper, we propose two novel modules to perform the enhancement of the information for the multi-person pose estimation. First, a Channel Shuffle Module (CSM) is proposed to adopt the channel shuffle operation on the feature maps with different levels, promoting cross-channel information communication among the pyramid feature maps. Second, a Spatial, Channel-wise Attention Residual Bottleneck (SCARB) is designed to boost the original residual unit with attention mechanism, adaptively highlighting the information of the feature maps both in the spatial and channel-wise context. The effectiveness of our proposed modules is evaluated on the COCO keypoint benchmark, and experimental results show that our approach achieves the state-of-the-art results. 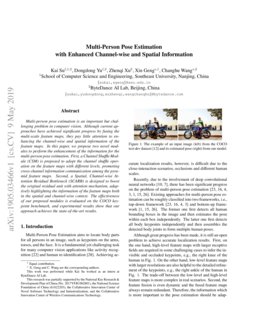 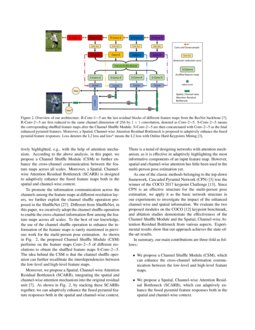 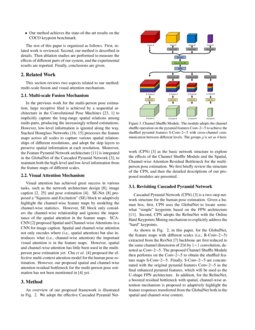 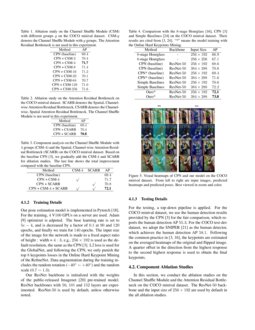 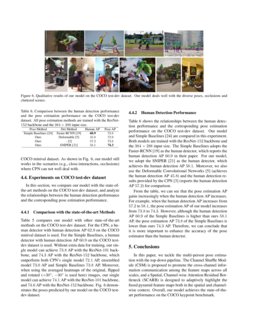 Multi-Person Pose Estimation aims to locate body parts for all persons in an image, such as keypoints on the arms, torsos, and the face. It is a fundamental yet challenging task for many computer vision applications like activity recognition [22] and human re-identification [28]. Achieving accurate localization results, however, is difficult due to the close-interaction scenarios, occlusions and different human scales.

Recently, due to the involvement of deep convolutional neural networks

Although great progress has been made, it is still an open problem to achieve accurate localization results. First, on the one hand, high-level feature maps with larger receptive fields are required in some challenging cases to infer the invisible and occluded keypoints, e.g., the right knee of the human in Fig. 1. On the other hand, low-level feature maps with larger resolutions are also helpful to the detailed refinement of the keypoints, e.g., the right ankle of the human in Fig. 1. The trade-off between the low-level and high-level feature maps is more complex in real scenarios. Second, the feature fusion is even dynamic and the fused feature maps always remain redundant. Therefore, the information which is more important to the pose estimation should be adaptively highlighted, e.g., with the help of attention mechanism. According to the above analysis, in this paper, we propose a Channel Shuffle Module (CSM) to further enhance the cross-channel communication between the feature maps across all scales. Moreover, a Spatial, Channel-wise Attention Residual Bottleneck (SCARB) is designed to adaptively enhance the fused feature maps both in the spatial and channel-wise context.

As one of the classic methods belonging to the top-down framework, Cascaded Pyramid Network (CPN) [3] was the winner of the COCO 2017 keypoint Challenge [13]. Since CPN is an effective structure for the multi-person pose estimation, we apply it as the basic network structure in our experiments to investigate the impact of the enhanced channel-wise and spatial information. We evaluate the two proposed modules on the COCO [12] keypoint benchmark, and ablation studies demonstrate the effectiveness of the Channel Shuffle Module and the Spatial, Channel-wise Attention Residual Bottleneck from various aspects. Experimental results show that our approach achieves the state-of-the-art results.

In summary, our main contributions are three-fold as follows:

The rest of this paper is organized as follows. First, related work is reviewed. Second, our method is described in details. Then ablation studies are performed to measure the effects of different parts of our system, and the experimental results are reported. Finally, conclusions are given.

In the previous work for the multi-person pose estimation, large receptive filed is achieved by a sequential architecture in the Convolutional Pose Machines [23, 1] to implicitly capture the long-range spatial relations among multi-parts, producing the increasingly refined estimations. However, low-level information is ignored along the way. Stacked Hourglass Networks [16, 15] processes the feature maps across all scales to capture various spatial relationships of different resolutions, and adopt the skip layers to preserve spatial information at each resolution. Moreover, the Feature Pyramid Network architecture [11] is integrated in the GlobalNet of the Cascaded Pyramid Network [3], to maintain both the high-level and low-level information from the feature maps of different scales.

proposed the effective multi-context attention model for the human pose estimation. However, our proposed spatial and channel-wise attention residual bottleneck for the multi-person pose estimation has not been mentioned in

An overview of our proposed framework is illustrated in Fig. 2. We adopt the effective Cascaded Pyramid Network (CPN) [3] as the basic network structure to explore the effects of the Channel Shuffle Module and the Spatial, Channel-wise Attention Residual Bottleneck for the multi-person pose estimation. We first briefly review the structure of the CPN, and then the detailed descriptions of our proposed modules are presented.

Cascaded Pyramid Network (CPN) [3] is a two-step network structure for the human pose estimation. Given a human box, first, CPN uses the GlobalNet to locate somewhat “simple” keypoints based on the FPN architecture [11]. Second, CPN adopts the RefineNet with the Online Hard Keypoints Mining mechanism to explicitly address the “hard” keypoints.

As shown in Fig. 2, in this paper, for the GlobalNet, the feature maps with different scales (i.e., R-Conv-2∼5) extracted from the ResNet [7] backbone are first reduced to the same channel dimension of 256 by 1×1 convolution, denoted as Conv-2∼5. The proposed Channel Shuffle Module then performs on the Conv-2∼5 to obtain the shuffled feature maps S-Conv-2∼5. Finally, S-Conv-2∼5 are concatenated with the original pyramid features Conv-2∼5 as the final enhanced pyramid features, which will be used as the U-shape FPN architecture. In addition, for the RefineNet, a boosted residual bottleneck with spatial, channel-wise attention mechanism is proposed to adaptively highlight the feature responses transferred from the GlobalNet both in the spatial and channel-wise context.

As the levels of the feature maps are greatly enriched by the depth of the layers in the deep convolutional neural networks, many visual tasks have made significant improvements, e.g., image classification [7]. However, for the multi-person pose estimation, there are still limitations in the trade-off between the low-level and high-level feature maps. The channel information with different characteristics among different levels can complement and reinforce with each other. Motivated by this, we propose the Channel Shuffle Module (CSM) to further recalibrate the interdependencies between the low-level and high-level feature maps.

, assuming that the pyramid features extracted from the ResNet backbone are denoted as Conv-2

Based on the enhanced pyramid feature representations introduced above, we attach our boosted Attention Residual Bottleneck to adaptively enhance the feature responses both in the spatial and channel-wise context. As shown in Fig. 4, our Attention Residual Bottleneck learns the spatial attention weights β and the channel-wise attention weights α respectively.

Applying the whole feature maps may lead to sub-optimal results due to the irrelevant regions. Different from paying attention to the whole image region equally, spatial attention mechanism attempts to adaptively highlight the task-related regions in the feature maps.

followed by a sigmoid function on the input

where W denotes the convolution weights, and Sigmoid

Finally the learned spatial attention weights β is rescaled on the input V to achieve the output V′.

where ∗ means the element-wise multiplication between the i,j-th element of β and V in the spatial context.

In the squeeze step, global average pooling operation is first performed on the input U to generate the channel-wise statistics z∈RC, where the c-th element of z is calculated by

where uc∈RH×W is the c-th element of the input U.

In the excitation step, a simple gating mechanism with a sigmoid activation is performed on the channel-wise statistics z, i.e.,

where ∗ means the element-wise multiplication between the c-th element of α and U in the channel-wise context.

The first type applies the spatial attention before the channel-wise attention, as shown in Fig. 4. All processes are summarized as follows:

where the function F(X) represents the residual mapping to be learned in the ResNet [7], ˜X is the output attention feature maps with the enhanced spatial and channel-wise information.

Similarly, the second type is a model with channel-wise attention implemented first, i.e.,

The choice of the SCARB and CSARB will be discussed in the ablation studies of the experiments.

Our multi-person pose estimation system follows the top-down pipeline. First, a human detector is applied to generate all human bounding boxes in the image. Then for each human bounding box, we apply our proposed network to predict the corresponding human pose.

images) compared with the public state-of-the-art results. We use the official evaluation metric

[12] that reports the OKS-based AP (average precision) in the experiments, where the OKS (object keypoints similarity) defines the similarity between the predicted pose and the ground truth pose.

Our pose estimation model is implemented in Pytorch

[20] pre-trained model. ResNet backbones with 50, 101 and 152 layers are experimented. ResNet-50 is used by default, unless otherwise noted.

In this section, we conduct the ablation studies on the Channel Shuffle Module and the Attention Residual Bottleneck on the COCO minival dataset. The ResNet-50 backbone and the input size of 256×192 are used by default in the all ablation studies.

In this experiment, we explore the effects of different implementation orders of the spatial attention and the channel-wise attention in the Attention Residual Bottleneck, i.e., SCARB and CSARB. The ResNet-50 backbone and the input size of 256×192 are used by default, and the Channel Shuffle Module is not used here. As shown in Table 2, the SCARB achieves the best AP of 70.8. It indicates that when only using the SCARB, our model outperforms the baseline CPN by 1.4 AP. Therefore, SCARB is selected by default.

In this experiment, we analyze the importance of each proposed component on the COCO minival dataset, i.e., the Channel Shuffle Module and the Attention Residual Bottleneck. According to Table 1 and 2, the Channel Shuffle Module with 4 groups (CSM-4) and the Spatial, Channel-wise Attention Residual Bottleneck (SCARB) are selected finally. Accroding to Table 3, compared with the 69.4 AP of the baseline CPN, with only the CSM-4 used, we can achieve 71.7 AP, and with only the SCARB used, we can achieve 70.8 AP. With all the proposed components used, we can achieve 72.1 AP, with the improvement of 2.7 AP over the baseline CPN.

In this section, we compare our model with the state-of-the-art methods on the COCO test-dev dataset, and analyze the relationships between the human detection performance and the corresponding pose estimation performance.

4.4.1 Comparison with the state-of-the-art Methods

In this paper, we tackle the multi-person pose estimation with the top-down pipeline. The Channel Shuffle Module (CSM) is proposed to promote the cross-channel information communication among the feature maps across all scales, and a Spatial, Channel-wise Attention Residual Bottleneck (SCARB) is designed to adaptively highlight the fused pyramid feature maps both in the spatial and channel-wise context. Overall, our model achieves the state-of-the-art performance on the COCO keypoint benchmark.