Task scheduling is an important and complex problem in computational grid. A computational grid often covers a range of different kinds of nodes, which offers a complex environment. There is a need to develop algorithms that can capture this complexity as while as can be easily implemented and used to solve a wide range of load-balancing scenarios. In this paper, we propose a game theory based algorithm to the grid load balancing problem on the principle of minimizing the cost of the grid. The grid load-balancing problem is treated as a non-cooperative game. The experiment results demonstrate that the game based algorithm has a desirable capability to reduce the cost of the grid. 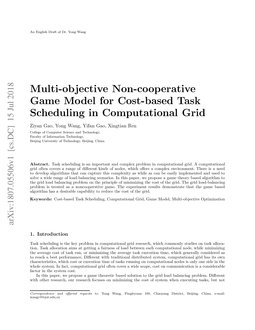 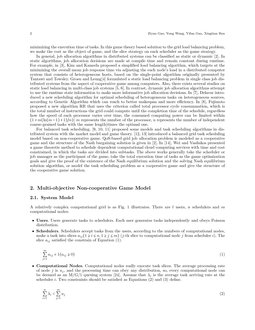 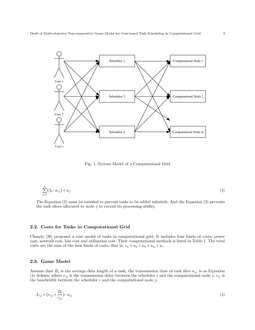 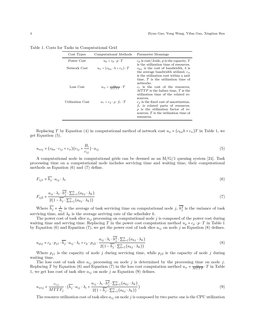 In general, job allocation algorithms in distributed systems can be classified as static or dynamic

[2]. In static algorithms, job allocation decisions are made at compile time and remain constant during runtime. For example, in [3], Kim and Kameda proposed a simplified load balancing algorithm, which targets at the minimizing the overall mean job response time via adjusting the each node’s load in a distributed computer system that consists of heterogeneous hosts, based on the single-point algorithm originally presented by Tantawi and Towsley. Grosu and Leung[4] formulated a static load balancing problem in single class job distributed systems from the aspect of cooperative game among computers. Also, there exists several studies on static load balancing in multi-class job systems [5, 6]. In contrast, dynamic job allocation algorithms attempt to use the runtime state information to make more informative job allocation decisions. In [7]

, Delavar introduced a new scheduling algorithm for optimal scheduling of heterogeneous tasks on heterogeneous sources, according to Genetic Algorithm which can reach to better makespan and more efficiency. In

[8], Fujimoto proposed a new algorithm RR that uses the criterion called total processor cycle consummation, which is the total number of instructions the grid could compute until the completion time of the schedule, regardless how the speed of each processor varies over time, the consumed computing power can be limited within (1+m(ln(m−1)+1)/n)( m represents the number of the processor, n represents the number of independent coarse-grained tasks with the same length)times the optimal one.

For balanced task scheduling, [9, 10, 11] proposed some models and task scheduling algorithms in distributed system with the market model and game theory. [12, 13] introduced a balanced grid task scheduling model based on non-cooperative game. QoS-based grid job allocation problem is modeled as a cooperative game and the structure of the Nash bargaining solution is given in [2]. In [14], Wei and Vasilakos presented a game theoretic method to schedule dependent computational cloud computing services with time and cost constrained, in which the tasks are divided into subtasks. The above works generally take the scheduler or job manager as the participant of the game, take the total execution time of tasks as the game optimization goals and give the proof of the existence of the Nash equilibrium solution and the solving Nash equilibrium solution algorithm, or model the task scheduling problem as a cooperative game and give the structure of the cooperative game solution.

2.2 Costs for Tasks in Computational Grid

Replacing T by Equation (4) in computational method of network cost un=(cbwb+cn)T in Table 1, we get Equation (5).

is the variance of task servicing time, and

λk is the average arriving rate of the scheduler k.

So, the total costs of task slice aij is cuij=upij+unij+uwij+urij.

Each scheduler shares the set of computational nodes in a computational grid with each other, it is independent and competes with each other to make its task processing costs minimal. Thus, a non-cooperative game exists among schedulers from 1 to n, and every scheduler acts as a player of the game. The task slicing strategy of scheduler i is ai={ai1,⋯,aij,⋯,aim}. In the game, every scheduler expects that its task processing cost is minimal. That is, the objective function is as Equation (11) defines.

The game using Equation (11) as objective function has a unique Nash equilibrium.

Just because Equation (11) is continuous, convex, and increasing, that is,

But, Equation (11) is very complex and hard to be solved. We make it to be a multi-objective game as Equation (12) defines.

The game using Equation (12) as objective function has a unique Nash equilibrium.

Just because Equation (12) is continuous, convex, and increasing, that is,

Equation (12) is a multi-objective non-cooperative game, following the methods on solving multi-objective game in [27], we solve MIN(∑mj=1upij), and observe other objective’s results.

We introduce a new variable uji as Equation (14) defines, which denotes the computational power of node j that is available to scheduler i.

Combining Equation (13) and Equation (14), we get the new equation for power cost as Equation (15) defines.

Since all formulae in Equation (12) are all convex, the first-order Karush-Kuhn-Tucker conditions are necessary and sufficient to solve it. The Lagrangian is given by

We get the following equations.

By constraint (1), α is given by the following equation.

All computational nodes that make aij<0 must be excluded, we set aij=0 for these nodes.

Based on the game model in the above subsection, we can design the solving algorithm as follows.

Order the computational nodes according to potential power cost such that up1i<up2i<⋯<upmi, upji is defined by the following equation.

Then we have the following equation.

α is given by the following equation.

di:1≤di≤m is the maximum positive integer that satisfies (26).

In this section, we analyze the effects of different aspects on the average task power cost of the schedulers given by (13) and compare the result with the average-allocated algorithm. Besides, with the same parameter of game algorithm, we observe its impacts on other costs.

3.1 Convergence to Equilibrium of the Game Algorithm

In this experiment, we analyze the convergence to equilibrium of the game algorithm. Each scheduler chooses its own strategy independently and dependents on a particular system state. However, the system state is always changing when schedulers are running, so that the strategy for the scheduler needs to be updated when the system state is changing. In order to make the system reach to a stable state, whereby no player has a tendency to unilaterally change its strategy, it needs to make the algorithm run iteration and reach the Nash equilibrium eventually. The initial strategy ai of each scheduler i

is the zero vector, each scheduler then refines and updates its strategy at each iteration. When the result does not change, we expect the system to reach a Nash equilibrium.

In this experiment, we set the average system load to 0.2. The values in Table 2 represent the average processing rate of each computational node and the relative job arrival rate for each scheduler is shown in Table 3. The result, as shown in Fig. 2 that the algorithm converges to a Nash equilibrium in 4 iterations (in this paper, we assume that convergence has occurred when the overall percentage change is 0.0001). In terms of the periodic scheduling done by each scheduler, an equilibrium is reached when the calculated strategy does not change from one iteration to another.

Fig. 4 shows the normalized average job costs as the system load is varied from 0.1 to 0.9. As before, the job cost is normalized by dividing each cost by the overall average cost of the game scheme. In this figure, we see an increase in the system wide average job cost as the system loads increase. This trend is explained by and is a consequence of (15). As the system loads increase, the average queue length at the computational node gets longer, and as a result, the average cost will be added by cost when the task is waiting in the queue. Both of the game algorithm and average scheme show the same trend, although the game algorithm gives lower expected costs.

In this part of the experiment, we vary the number of computational nodes and the number of schedulers in the system and investigate its effect on the average cost of the schedulers for both the game algorithm and average schemes.

The Bounded Pareto distribution is characterized by the following probability density function (pdf):

where k is the minimum job execution time and p

and the second moment is given by

The same set of schedulers and parameters are then used as in the previous set of experiments. We then vary the system loads from 0.1 to 0.9 and investigate the effect of the Bounded Pareto service time of tasks on the number of iterations required to reach equilibrium for the game algorithm. The effect of the Bounded Pareto service times on the overall average task power cost are shown in Fig. 7. As can be seen in the figure, the trend in the system wide average job power cost is similar with the previous result shown in Fig. 4, where the service times follow an exponential distribution. Besides, the game algorithm gives a lower overall task power cost than the average-allocated algorithm.

A fairness index given by

In the first part of the experiment, we vary the average system load from 0.1 to 0.9. The results are shown in Fig. 8. As can be seen in the figure, the average-allocated algorithm has a fairness index of 1.0 across the entire utilization range from 0.1 to 0.9. This is the inherent advantage of the average-allocated algorithm even though it is a distributed, decentralized scheme and has more cost compared with the game algorithm, it guarantees the same average task power cost for each of the schedulers. As shown in the figure, the game algorithm decreases in fairness as the system nears full capacity. However, the fairness index at 90 percent system load is still above 0.98, and depending on the requirement of the application, this value may be more optimal than the minimum acceptable level.

3.6 Impact on other costs

From these experiments above, we can find that the game algorithm has a strong advantage in power cost of scheduler. Followed by the analysis of power cost above with the same set of parameters and the same objective equation, we observe its impact on other objectives, that is network cost, loss cost, and utilization cost.

These results are shown in Fig. 12, Fig.13, Fig. 14 for network cost, lost cost, and utilization cost respectively. As before, the job cost is normalized by dividing each cost by the average cost of the game scheme. As can be seen from figures, game algorithm has a lower cost than average scheme for every scheduler no matter on network cost or lost cost, or utilization cost. Which means that the result of multi-objective non-cooperative game, what we define in equation 12, is reasonable.

In this paper, we propose a game theoretic algorithm that solves the grid load balancing problem. It aims at minimizing the average task cost for schedulers when tasks are executed in the grid system. The algorithm is semi-static and responds to the changes in system states during runtime. This game algorithm does not assume any particular distribution for service times. It can run correctly only with the first moment and second moment of service times. The experiment results show that the algorithm has a lower cost in the schedule of computational grid.