The ability of an autonomous vehicle to perform 3D tracking is essential for safe planing and navigation in cluttered environments. The main challenges for multi-object tracking (MOT) in autonomous driving applications reside in the inherent uncertainties regarding the number of objects, when and where the objects may appear and disappear, and uncertainties regarding objects' states. Random finite set (RFS) based approaches can naturally model these uncertainties accurately and elegantly, and they have been widely used in radar-based tracking applications. In this work, we developed an RFS-based MOT framework for 3D LiDAR data. In partiuclar, we propose a Poisson multi-Bernoulli mixture (PMBM) filter to solve the amodal MOT problem for autonomous driving applications. To the best of our knowledge, this represents a first attempt for employing an RFS-based approach in conjunction with 3D LiDAR data for MOT applications with comprehensive validation using challenging datasets made available by industry leaders. The superior experimental results of our PMBM tracker on public Waymo and Argoverse datasets clearly illustrate that an RFS-based tracker outperforms many state-of-the-art deep learning-based and Kalman filter-based methods, and consequently, these results indicate a great potential for further exploration of RFS-based frameworks for 3D MOT applications. 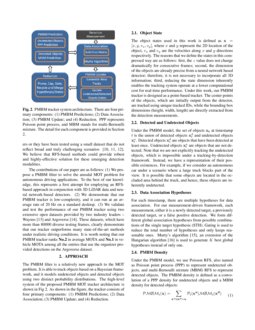 Multiple object tracking (MOT) is a critical module for enabling an autonomous vehicle achieve robust perception of its environment and consequently achieve safe maneuvering within the environment surrounding the vehicle. The main challenges for MOT in autonomous driving applications are threefold: (1) uncertainty in the number of objects; (2) uncertainty regarding when and where the objects may appear and disappear; (3) uncertainty in objects’ states. Traditional filtering based methods, such as Kalman filtering [7, 18, 3]

, perform well in state update and estimation but can hardly model the unknown number of objects, and the so-called

birth and death phenomena of objects. Meanwhile, the emergence of random finite set (RFS)[15, 11, 16] based approaches have opened the door for developing theoretically sound Bayesian frameworks that naturally model all the aforementioned uncertainties accurately and elegantly.

RFS-based MOT algorithms have been shown to be very effective for radar-based MOT applications [17, 13]. In particular, Poisson multi-Bernoulli mixture (PMBM) filtering has shown superior tracking performance and favourable computational cost [19] when compared to other RFS-based approaches. Consequently, under this work, we propose a PMBM filter to solve the amodal MOT problem for autonomous driving applications (Fig 1). Applying RFS-based trackers for 3D LiDAR data and/or for 2D/3D amodal detections (bounding boxes) has not been well explored. Existing works in this area either under-perform state-of-the-art trackers or they have been tested using a small dataset that do not reflect broad and truly challenging scenarios  [8, 10, 6]. We believe that RFS-based methods could provide robust and highly-effective solution for these emerging detection modalities.

The contributions of our paper are as follows: (1) We propose a PMBM filter to solve the amodal MOT problem for autonomous driving applications. To the best of our knowledge, this represents a first attempt for employing an RFS-based approach in conjunction with 3D LiDAR data and neural network-based detectors. (2) We demonstrate that our PMBM tracker is low-complexity, and it can run at an average rate of 20 Hz on a standard desktop. (3) We validate and test the performance of our PMBM tracker using two extensive open datasets provided by two industry leaders – Waymo [14] and Argoverse [2]. These datasets, which have more than 80000 diverse testing frames, clearly demonstrate that our tracker outperforms many state-of-the-art methods under realistic driving conditions. It is worth noting that our PMBM tracker ranks No.2 in average MOTA and No.1 in vehicle MOTA among all the entries that use the organizer provided detections on the Argoverse dataset.

The PMBM filter is a relatively new approach to the MOT problem. It is able to track objects based on a Bayesian framework, and it models undetected objects and detected objects using two distinct probability distributions. The high-level system of the proposed PMBM MOT tracker architecture is shown in Fig

2. As shown in the figure, the tracker consists of four primary components: (1) PMBM Predictions; (2) Data Association; (3) PMBM Update; and (4) Reduction.

The object states used in this work is defined as x=[x,y,vx,vy], where x and y represent the 2D location of the object, vx and vy are the velocities along x and y directions respectively. The reasons that we define the states in this compressed way are as follows: first, the z value does not change dramatically for consecutive frames; second, the dimension of the objects are already precise from a neural network based detector; therefore, it is not necessary to incorporate all 3D information; third, reducing the state dimension inherently enables the tracking system operate at a lower computational cost for real-time performance. Under this work, our PMBM tracker is designed as a point-based tracker. The center points of the objects, which are initially output from the detector, are tracked using unique tracked IDs, while the bounding box dimensions (height, width, length) are directly extracted from the detection measurements.

For each timestamp, there are multiple hypotheses for data association. For our measurement-driven framework, each measurement, either it is a newly detected target, a previously detected target, or a false positive detection. We form different global association hypotheses from possible combinations of the single target hypothesis (STH). Gating is used to reduce the total number of hypotheses and only keeps reasonable ones. Murty’s algorithm [12], an extension of the Hungarian algorithm [9] is used to generate K best global hypotheses instead of only one.

where x represents all the objects in the surveillance area, and where x is the disjoint union set of undetected objects xu and detected objects xd. P(⋅) and MBM(⋅) are the Poisson point process density and multi-Bernoulli mixture density, respectively.

where p(xt+1|xt) represents the transition density. Constant velocity model is used as the motion model in this work for simplicity. Under the PMBM filter, undetected and detected objects can be predicted independently. We define Ps

Ps in the prediction step. For detected objects, which are modeled as multi-Bernoulli mixture RFSs, each multi-Bernoulli (MB) process can also be predicted independently of the other MB processes. The probability of existence for each MB-modeled object is decreased by a factor Ps in order to account for the higher uncertainty of existence within the Prediction stage.

Furthermore, by adding information from the measurement model p(zt|xt), the PMBM density can be updated with:

In the update step, the undetected objects that do not have any measurement associated with them remain undetected. The Bayesian update will thus not change the states or variances of the Poisson distributions since no new information is added. Here we define

There are two different types of updates for detected objects: the objects being detected for the first time and the detected objects from the previous timestamp. Our tracker is a measurement-driven framework: an object must be connected to a measurement in order to be classified as detected for the first time. All the undetected PPP intensity components and corresponding gated measurements are considered to generate the fused distribution. Note that the detections provided from a neural network always have confident scores attached to them. This confident score is an invaluable indicator of the object probability of existence. So unlike a standard PMBM filter, we incorporate the detection confident score into the update step of objects detected for the first time. We get a new Bernoulli process for each first-time detected object. As for detected objects from the previous timestamp, if there are measurements associated with them, then for each hypothesis, a standard Kalman filter is used to update the state vector, the updated probability of existence is set to 1 because one can not associate a measurement to an object that does not exist; if there is no measurement associated with an object, which was detected from a previous frame, then we maintain the object predicted state unchanged. Furthermore, we decrease the probability of existence and weight with

(1−Pd). Note that Pd here is related to the associated detection confident score in the past frames. Here, unlike other standard Kalman filter based trackers, the survival time of detected objects without measurement varies based on the tracking status from the previous time period.

The assignment problem in MOT will theoretically become NP-hard[4], and hence, the reduction of the number of hypotheses is necessary for decreasing the computational complexity and maintain real-time performance. Five reduction techniques are used in this work: pruning, capping, gating, recycling and merging. Pruning is used to remove objects and global hypotheses with low weights. Capping is used to set an upper bound for the number of global hypotheses and detected objects. Gating refers to limiting the search distance for data association, and where Mahalanobis distance is used here instead of Euclidean distance. Recycling is applied to detected objects with lower probability of existence. In that context, instead of discarding these objects, we recycle them by moving them from detected object set to undetected object set. There may be non-unique global hypotheses, and hence, merging would merge these identical global hypotheses into one.

Argoverse 3D tracking dataset consists of 113 total number of segments (scenes) and 15-30 seconds for each segment. The data is divided into three sets: 65 segments for training (∼ 13000 frames), 24 segments for validation (∼ 5000 frames) and 24 segments for test (∼ 4200 frames). Since our method is not a learning based method, we don’t need to use the training set; but validation set is used for tuning the parameters. Class vehicle and class pedestrian are evaluated. The field of view of these two datasets are both 360 degrees.

Note that for both Waymo and Argoverse datasets, ground truth labels are only available for training and validation sets. For fairness of evaluation of testing samples, one needs to submit the tracking results to the relevant server, and the evaluation results are subsequently published on the corresponding leaderboard.

Detections. We use precomputed 3D object detections provided by the dataset organizer.

The results for Argovers dataset and Waymo dataset are shown in Table 1 and Table 2. As shown in these two tables, our method outperforms other state-of-the-art tracker significantly. At the time of submission (May 2020), among all the entries that use organizer provided detections, our PMBM tracker ranked No.3 in averaged ranking (primary metric), No.2 in averaged MOTA for all classes, No.1 in Vehicle MOTA, No.5 in Pedestrian MOTA within the Argoverse 3D Tracking Leaderboard111https://evalai.cloudcv.org/web/challenges/challenge-page/453/leaderboard/1278#leaderboardrank-1, and No.5 on the Waymo 3D tracking leaderboard 222https://waymo.com/open/challenges/3d-tracking/. For tracking-by-detection approaches, the impact of the quality of input detections is inherently of a paramount importance. But our performance is still very competitive compared to other entries that use better self-generated detections.

It is worth noting that our tracker has superior performance for the vehicle case compared to pedestrian tracking. We believe that this is attributed to the fact that the distance between pedestrians are much smaller than distances among vehicles. Thus, since our tracker is a point-based method, it is unable to process object dimension, and consequently, close distances between hypotheses could result in merging such hypotheses that should be separated. Subsequently, this could lead to erroneous data associations. Therefore, as shown in Table 1, for class pedestrian, our tracker has higher false positives, ID switches and fragmentations, which are due to low quality data association. Meanwhile, for vehicles, all the vehicle detection measurements are further separated due to the fact that two vehicles cannot be overlaid with each other when compared to the pedestrian case.

In this paper, we propose a PMBM filter to solve the 3D amodal MOT problem with 3D LiDAR data for autonomous driving applications. Our framework can naturally model the uncertainties in MOT problem. This represents a first attempt for employing an RFS-based approach in conjunction with 3D LiDAR data, neural network-based detectors and with comprehensive testing in large-scale datasets. The experimental results on Waymo and Argoverse datasets demonstrate that our approach outperforms previous state-of-the-art methods by a large margin. Finally, we hope that our results motivate future research on RFS-based trackers for self-driving applications.

Acknowledgement: This work has been supported in part by the Semiconductor Research Corporation (SRC) and by Amazon Robotics under the Amazon Research Award (ARA) program.