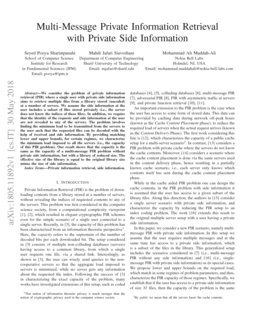 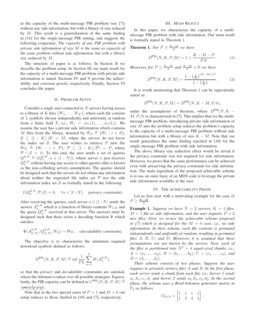 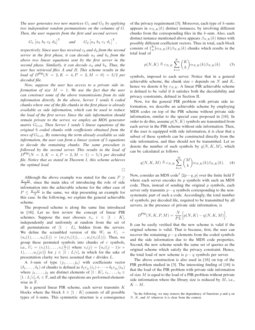 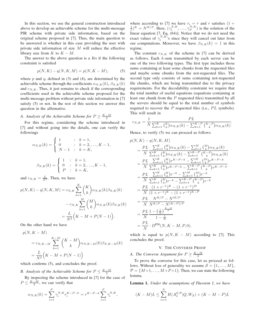 Private Information Retrieval (PIR) is the problem of downloading contents from a library stored at a number of servers, without revealing the indices of requested contents to any of the servers. This problem was first considered in the computer science society, from a computational complexity viewpoint [1], [2], which resulted in elegant cryptographic PIR schemes even for the simple scenario of a single user connected to a single server. Recently, in [3], the capacity of this problem has been characterized from an information theoretic perspective111This notion of information theoretic privacy is much stronger than the notion of cryptographic privacy used in the computer science society.. Here, the capacity refers to the supremum of the number of decoded bits per each downloaded bit. The setup considered in [3] consists of multiple non-colluding databases (servers) having access to a common library, from which a single user requests one file, via a shared link. Interestingly, as shown in [3], the user can wisely send queries to the non-cooperative servers so that the aggregate load imposed to servers is minimized, while no server gets any information about the requested file index. Following the success of [3] in characterizing the exact capacity of the problem, many works have investigated extensions of this setup, such as coded databases [4, 5], colluding databases [6], multi-message PIR [7], adversarial PIR [8], PIR with asymmetric traffic at servers [9], and private function retrieval [10, 11].

An important extension to the PIR problem is the case when the user has access to some form of stored data. This data can be provided by caching data during network off-peak hours (known as the Cache Content Placement phase), to reduce the required load of servers when the actual request arrives (known as the Content Delivery Phase). The first work considering this line is [12], which characterizes the capacity of a public cache setup for a multi-server scenario222By public we mean that all the servers know the cache contents.. In contrast, [13] considers a PIR problem with private cache where the servers do not know the cache contents. Moreover, [14] considers a scenario where the cache content placement is done via the same servers used in the content delivery phase, hence resulting in a partially known cache scenario, i.e., each server only knows which contents itself has sent during the cache content placement phase.

The structure of paper is as follows. In Section II we describe the problem setup. In Section III our main result for the capacity of a multi-message PIR problem with private side information is stated. Sections IV and V provide the achievability and converse proofs, respectively. Finally, Section VI concludes the paper.

Consider a single user connected to N servers having access to a library of K files {W1,…,WK}, where each file consists of L symbols chosen independently and uniformly at random from a finite field F, i.e., Wi=(wi(1),…,wi(L)). We assume the user has a private side information which contains M files from the library, denoted by WS≜{Wi:i∈S}, S⊆[1:K],|S|=M, where the servers do not know the index set S. The user wishes to retrieve P new file WP≜{Wi:i∈P}, P⊆[1:K],|P|=P, where P∩S=∅. To this end, the user sends a set of queries QS,P≜{QS,Pn,n∈[1:N]}, where server n just receives QS,Pn without having any access to other queries (this is known as the non-colluding servers assumption). The queries should be designed such that the servers do not obtain any information about neither the requested file index set P nor the side information index set S as formally stated in the following

After receiving the queries, each server n∈[1:N] sends the answer AS,Pn which is a function of library contents W1:K and the query QS,Pn received at that server. The answers must be designed such that there exists a decoding function Ψ which satisfies

so that the privacy and decodability constraints are satisfied, where the infimum is taken over all possible strategies. Equivalently, the PIR capacity can be defined as CPSI(N,K,P,M)≜1DPSI(N,K,P,M).

Note that in the two special cases of P=1 and M=0 our setup reduces to those studied in [16] and [7], respectively.

In this paper, we characterize the capacity of a multi-message PIR problem with side information. Our main result is formally stated in Theorem 1.

Let us first start with a motivating example for the case of P≥K−M2.

Suppose we have N=2 servers, K=4 files, M=1 file as side information, and the user requests P=2 new files. First, we review the achievable scheme proposed in [7] which is designed for the M=0 case, i.e., no side information. In their scheme, each file contents is permuted independently and uniformly at random, resulting in permuted files A, B, C, and D. Moreover, it is assumed that these permutations are not known by the servers. Next, each of the files is partitioned into N2=4 equal-sized chunks, i.e., A=(a1,…,a4), B=(b1,…,b4), C=(c1,…,c4), and D=(d1,…,d4).

Their scheme consists of two phases. Suppose the user requires to privately retrieve files A and B. In the first phase, each server sends a chunk from each file, i.e., Server 1 sends a1,b1,c1,d1 and Server 2 sends a2,b2,c2,d2. In the second phase, the scheme uses a Reed-Solomon generator matrix in Fq as follows

The user generates two new matrices G1 and G2 by applying two independent random permutations on the columns of G. Then, the user requests from the first and second servers

respectively. Since user has received c2 and d2 from the second server in the first phase, it can decode a3 and b3 from the above two linear equations sent by the first server in the second phase. Similarly, it can decode a4 and b4. Thus, the user has retrieved files A and B. This scheme results in the load of DPSI(N=2,K=4,P=2,M=0)=3/2 per decoded file.

Now, suppose the user has access to a private side information of size M=1. We use the fact that the user can construct some of the above transmissions from its side information directly. In the above, Server 1 sends 6 coded chunks where one of the file chunks in the first phase is already available as side information, which can be used to reduce the load of the first server. Since the side information should remain private to the server, we employ an MDS generator matrix G5×6. Then Server 1 sends 5 linear equations of the original 6 coded chunks with coefficients obtained from the rows of G5×6. By removing the term already available as side information, the user can form a linear system of 5 equations to decode the remaining chunks. The same procedure is followed by the second server. This results in the load of DPSI(N=2,K=4,P=2,M=1)=5/4 per decoded file. Notice that as stated in Theorem 1, this scheme achieves the optimal load.

Although the above example was stated for the case P≥K−M2, since the main idea of introducing the role of side information into the achievable scheme for the other case of P≤K−M2 is the same, we skip presenting an example for this case. In the following, we explain the general achievable scheme.

In a general linear PIR scheme, each server transmits K blocks where the block k∈[1:K] consists of all possible types of k-sums. This symmetric structure is a consequence of the privacy requirement [3]. Moreover, each type of k-sums appears in αN,K(k) distinct instances, by involving different chunks from the corresponding files in the k-sum. Also, each distinct instance mentioned above appears βN,K(k) times with possibly different coefficient vectors. Thus in total, each block consists of (Kk)αN,K(k)βN,K(k) chunks which results in the total load of

symbols, imposed to each server. Notice that in a general achievable scheme, the chunk size c depends on N and K, hence we denote it by cN,K. A linear PIR achievable scheme is defined to be valid if it satisfies both the decodability and privacy constraints, defined in Section II.

Now, consider an MDS code333In the following, we may remove the dependency of functions p and q on N, K, and M wherever it is clear from the context. [2p−q,p] over the finite field F where each server encodes its p symbols with such an MDS code. Then, instead of sending the original p symbols, each server only transmits p−q symbols corresponding to the non-systematic part of such a code. Accordingly, the total number of symbols, per decoded file, required to be transmitted by all servers, in the presence of private side information, is

In this section, we use the general construction introduced above to develop an achievable scheme for the multi-message PIR scheme with private side information, based on the original scheme proposed in [7]. Thus, the main question to be answered is whether in this case providing the user with private side information of size M will reduce the effective library size from K to K−M.

where p and q, defined in (3) and (4), are determined by the achievable scheme through the coefficients αN,K(k), βN,K(k) and cN,K. Thus, it just remains to check if the corresponding coefficients used in the achievable scheme proposed for the multi-message problem without private side information in [7] satisfy (5) or not. In the rest of this section we answer this question in the affirmative.

Iv-a Analysis of the Achievable Scheme for P≥K−M2

For this regime, considering the scheme introduced in [7] and without going into the details, one can verify the followings

On the other hand we have

which confirms (5), and concludes the proof.

Iv-B Analysis of the Achievable Scheme for P≤K−M2

By inspecting the scheme introduced in [7] for the case of P≤K−M2, we can verify that

Hence, to verify (5) we can proceed as follows

which is equal to p(N,K−M) according to [7]. This concludes the proof.

V-a The Converse Argument for P≥K−M2

To prove the converse for this case, let us proceed as follows. Without loss of generality we assume S={1,…,M}, P={M+1,…,M+P+1}. Then, we can state the following lemma.

Under the assumptions of Theorem 1, we have

The proof is provided in the Appendix. ∎

Now, we can lower bound DPSI as follows

where (a) follows from Lemma 1 and (b) holds due the following lemma, Lemma 2. This concludes the proof.

The proof is provided in the Appendix. ∎

V-B The Converse Argument for P≤K−M2

To prove the converse for this regime, we can state the following lemma.

Under the assumption of Theorem 1, we have

The proof is provided in the Appendix ∎

The result stated in Lemma 3 can be equivalently written as

Equation (V-B) provides a lower bound on H(A1|Q,WS). Applying the same chain of inequalities used to prove Lemma 3, one can derive a similar inequality for H(A1|W[M+1:M+2P],Q,WS). Hence, by applying (V-B) inductively over the library size, one can derive a lower bound for H(A1|Q,WS), similar to [7, Equation (125)]. The important difference of above calculations with those appeared in [7] is that here we start the induction from the message WM+1 while the starting point of [7] is the message W1.

which completes the proof for the case of P≤K−M2 and K−MP∈N.