Multi-message private information retrieval (MPIR) is an interesting variation of PIR which allows a user to download multiple messages from the database without revealing the identity of the desired messages. Obviously, the user can repeatly use a single-message PIR scheme, but we wish for a more efficient way to reduce the download cost. In [1], Banawan and Ukulus investigate the multi-message PIR problem with replicated database. In this paper, we consider multi-message PIR schemes where the database is stored using minimum storage regenerating (MSR) or minimum bandwidth regenerating (MBR) codes which are classes of optimal regenerating codes providing efficient repair when a node in the system fails. The relationships between the costs of storage, retrieval and repair are analysed, and explicit schemes using the MSR and MBR codes from [2], which both achieve the optimal curve of the trade-off, are given. To the best of our knowledge, our work is the first to explore the multi-message PIR with coded database. 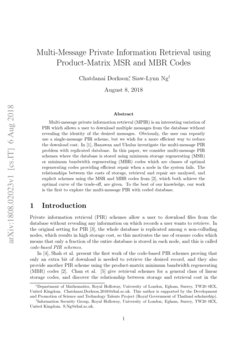 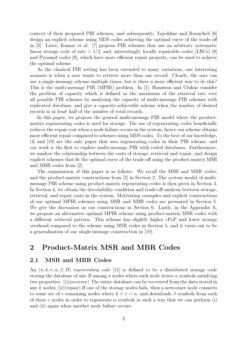 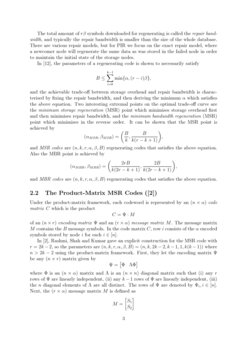 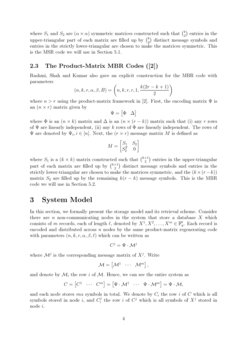 Private information retrieval (PIR) schemes allow a user to download files from the database without revealing any information on which records a user wants to retrieve. In the original setting for PIR [3], the whole database is replicated among n non-colluding nodes, which results in high storage cost, so this motivates the use of erasure codes which means that only a fraction of the entire database is stored in each node, and this is called code-based PIR schemes.

In [4], Shah et al. present the first work of the code-based PIR schemes proving that only an extra bit of download is needed to retrieve the desired record, and they also provide another PIR scheme using the product-matrix minimum bandwidth regenerating (MBR) codes [2]. Chan et al. [5] give retrieval schemes for a general class of linear storage codes, and discover the relationship between storage and retrieval cost in the context of their proposed PIR schemes, and subsequently, Tajeddine and Rouayheb [6] design an explicit scheme using MDS codes achieving the optimal curve of the trade-off in [5]. Later, Kumar et al. [7] propose PIR schemes that use an arbitrary systematic linear storage code of rate >1/2, and, interestingly, locally repairable codes (LRCs) [8] and Pyramid codes [9], which have more efficient repair property, can be used to achieve the optimal scheme.

As the classical PIR setting has been extended to many variations, one interesting scenario is when a user wants to retrieve more than one record. Clearly, the user can use a single-message scheme multiple times, but is there a more efficient way to do this? This is the multi-message PIR (MPIR) problem. In [1], Banawan and Ulukus consider the problem of capacity which is defined as the maximum of the retrieval rate over all possible PIR schemes by analysing the capacity of multi-message PIR schemes with replicated database, and give a capacity-achievable scheme when the number of desired records is at least half of the number of total records.

In this paper, we propose the general multi-message PIR model where the product-matrix regenerating codes is used for storage. The use of regenerating codes beneficially reduces the repair cost when a node failure occurs in the system, hence our scheme obtains more efficient repair compared to schemes using MDS codes. To the best of our knowledge, [4] and [10] are the only paper that uses regenerating codes in their PIR scheme, and our work is the first to explore multi-message PIR with coded databases. Furthermore, we analyse the relationship between the costs of storage, retrieval and repair, and design explicit schemes that fit the optimal curve of the trade-off using the product-matrix MSR and MBR codes from [2].

The organisation of this paper is as follows. We recall the MSR and MBR codes, and the product-matrix constructions from [2] in Section 2. The system model of multi-message PIR scheme using product-matrix regenerating codes is then given in Section 3. In Section 4, we obtain the decodability condition and trade-off analysis between storage, retrieval, and repair costs in the system. Motivating examples and explicit constructions of our optimal MPIR schemes using MSR and MBR codes are presented in Section 5. We give the discussion on our constructions in Section 6. Lastly, in the Appendix A, we propose an alternative optimal MPIR scheme using product-matrix MSR codes with a different retrieval pattern. This scheme has slightly higher cPoP and lower storage overhead compared to the scheme using MSR codes in Section 5, and it turns out to be a generalisation of our single-message construction in [10].

An (n,k,r,α,β,B) regenerating code [11] is defined to be a distributed storage code storing the database of size B among n nodes where each node stores α symbols satisfying two properties: (i)(recovery) The entire database can be recovered from the data stored in any k nodes; (ii)(repair) If one of the storage nodes fails, then a newcomer node connects to some set of r remaining nodes where k<r<n, and downloads β symbols from each of these r nodes in order to regenerate α symbols in such a way that we can perform (i) and (ii) again when another node failure occurs.

The total amount of rβ symbols downloaded for regenerating is called the repair bandwidth, and typically the repair bandwidth is smaller than the size of the whole database. There are various repair models, but for PIR we focus on the exact repair model, where a newcomer node will regenerate the same data as was stored in the failed node in order to maintain the initial state of the storage nodes.

In [12], the parameters of a regenerating code is shown to necessarily satisfy

and MSR codes are (n,k,r,α,β,B) regenerating codes that satisfies the above equation. Also the MBR point is achieved by

and MBR codes are (n,k,r,α,β,B) regenerating codes that satisfies the above equation.

Under the product-matrix framework, each codeword is represented by an (n×α) code matrix C which is the product

of an (n×r) encoding matrix Ψ and an (r×α) message matrix M. The message matrix M contains the B message symbols. In the code matrix C, row i consists of the α encoded symbols stored by node i for each i∈[n].

where S1 and S2 are (α×α) symmetric matrices constructed such that (k2) entries in the upper-triangular part of each matrix are filled up by (k2) distinct message symbols and entries in the strictly lower-triangular are chosen to make the matrices symmetric. This is the MSR code we will use in Section 5.1.

Rashmi, Shah and Kumar also gave an explicit construction for the MBR code with parameters

where n>r using the product-matrix framework in [2]. First, the encoding matrix Ψ is an (n×r) matrix given by

where S1 is a (k×k) matrix constructed such that (k+12) entries in the upper-triangular part of each matrix are filled up by (k+12) distinct message symbols and entries in the strictly lower-triangular are chosen to make the matrices symmetric, and the (k×(r−k)) matrix S2 are filled up by the remaining k(r−k) message symbols. This is the MBR code we will use in Section 5.2.

In this section, we formally present the storage model and its retrieval scheme. Consider there are n non-communicating nodes in the system that store a database X which consists of m records, each of length ℓ, denoted by X1,X2,…,Xm∈Fℓq. Each record is encoded and distributed across n nodes by the same product-matrix regenerating code with parameters (n,k,r,α,β,ℓ) which can be written as

where Mj is the corresponding message matrix of Xj. Write

and denote by Mi the row i of M. Hence, we can see the entire system as

We assume that in the retrieval step the user wants to download p records when p≤m, denoted by Xf1,…,Xfp. The user submits a d×mα query matrix Qi over GF(q) to node i. We can interpret d rows of Qi as d subqueries, and for instance d is set to be α in our constructions. Finally, node i computes and responds with an answer ATi=QiCTi. The retrieval steps are as follows:

Let H(⋅) be the entropy function. An MPIR scheme is said to be a perfect information-theoretic PIR scheme if

According to our definition, (i) implies that a node i does not obtain any information about which records are being downloaded by the user, and (ii) ensures that the user can recover the desired records Xf1,…,Xfp with no errors from all responses Ai,i∈[n].

To measure the efficiency of the MPIR scheme, we use three metrics, namely Storage Overhead (SO), communication Price of Privacy (cPoP) and Repair Ratio (RR). First, SO is defined to be the ratio of the total storage used in the scheme to the total size of the whole database which is

in our model, and the cPoP is defined in [6] as the ratio of the total amount of downloaded data to the total size of all desired records which, in our model, is

Lastly, RR is defined in our paper [10] as the ratio of the total amount of symbols downloaded for repairing a failed node to the size of the failed node which is equal to

From the retrieval scheme, we can see that in fact, the response from node i is

Then, the jth response in Ai is Aij=Ci(Uj)T+(Cf1i)(Vif1j)T+⋯+(Cfpi)(Vifpj)T where Vifuj is the row j of Vifu,u∈[p]. Hence, records Xf1,…,Xfp should be decoded by solving the system of linear equations

Hence, the retrieval scheme is decodable if the following system of linear equations

has a unique solution, where the unknowns are

This condition is called decodability condition.

Since Ψ is of rank r, it has a parity check matrix P of rank n−r such that P⋅Ψ=0. So we have

This gives us n−r linearly independent equations for each t∈[d]. Then, for

since any k rows of Cfu would give us Mfu, the remaining n−k rows must be able to be written in terms of linear combinations of those k rows of Cfu. This give us (n−k)α equations in Cfuab. Hence, there are at most nd+(n−r)d+p(n−k)α linearly independent equations in the system. If the retrieval scheme meets the decodability condition, then

In terms of storage overhead and cPoP we have

This shows that there is a trade-off between cPoP and storage overhead, and in terms of repair ratio and cPoP we have

This shows that cPoP is bounded below by repair ratio.

In this construction, we use the product-matrix MSR code from [2] with

over the finite field Fq, so the parameters of the MSR code are

We first start with an example to motivate our scheme.

Suppose that we have 3 records over the finite field F13, each with size 6, which can be written as

Recall that Caij is the jth symbol of record a, stored in node i. Here the entire database can be recovered from the content of any 3 nodes, and if any one node failed, it can be repaired by downloading one symbol each from 4 of the remaining nodes.

In the retrieval step, suppose the user wants record X1 and X2. The query Qi is a (2×6) matrix which we can interpret as 2 subqueries submitted to node i for each i∈[10]. To form the query matrices, the user generates a (2×6)random matrix U=[uij] whose entries are chosen uniformly at random from F13. Recall that Vij is a matrix which is part of the query submitted to node i, attempting to retrieve information about record Xj. Choose

Now we give the general construction of our MPIR scheme and prove the decodability and privacy. Recall that we use the MSR code with parameters

over Fq to store each record X1,…,Xm, which means that

where Mi is the message matrix corresponding to Xi as described in Section 2.2, so

Suppose that the user wants to retrieve p records Xf1,Xf2,…,Xfp. In the retrieval step, the user sends a (α×mα) query matrix Qi, which we can interpret as α subqueries, to each node i,i=1,…,n. To form the query matrices, the user generates a (α×mα) random matrix U=[uij] whose entries are chosen uniformly at a random from Fq. We choose, for u∈[p],j∈[k],

and for others Vst which are not defined above, we choose Vst=0α×α. As