In this paper, we develop Bayes and maximum a posteriori probability (MAP) approaches to monotonicity testing. In order to simplify this problem, we consider a simple white Gaussian noise model and with the help of the Haar transform we reduce it to the equivalent problem of testing positivity of the Haar coefficients. This approach permits, in particular, to understand links between monotonicity testing and sparse vectors detection, to construct new tests, and to prove their optimality without supplementary assumptions. The main idea in our construction of multi-level tests is based on some invariance properties of specific probability distributions. Along with Bayes and MAP tests, we construct also adaptive multi-level tests that are free from the prior information about the sizes of non-monotonicity segments of the function. 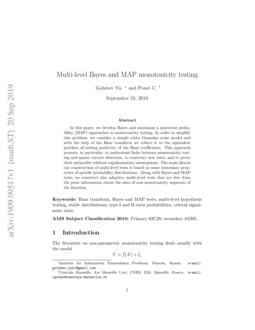 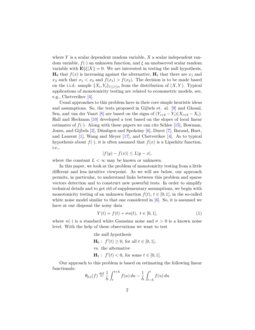 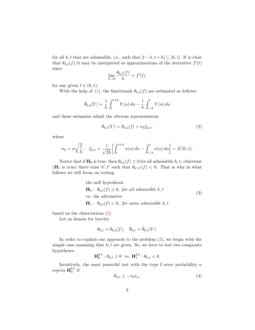 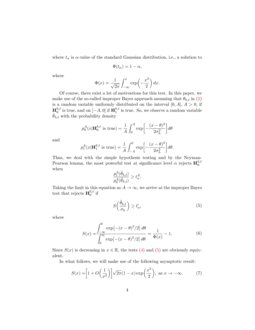 is a scalar dependent random variable,

H0 that f(x) is increasing against the alternative, H1 that there are x1 and x2 such that x1<x2 and f(x1)>f(x2). The decision is to be made based on the i.i.d. sample {Xi,Yi}1≤i≤n from the distribution of (X,Y). Typical applications of monotonicity testing are related to econometric models, see, e.g., Chetverikov [4].

Usual approaches to this problem have in their core simple heuristic ideas and assumptions. So, the tests proposed in Gijbels et. al.

where the constant L<∞ may be known or unknown.

In this paper, we look at the problem of monotonicity testing from a little different and less intuitive viewpoint. As we will see below, our approach permits, in particular, to understand links between this problem and sparse vectors detection and to construct new powerful tests. In order to simplify technical details and to get rid of supplementary assumptions, we begin with monotonicity testing of an unknown function f(t),t∈[0,1]

, in the so-called white noise model similar to that one considered in

[6]. So, it is assumed we have at our disposal the noisy data

where n(⋅) is a standard white Gaussian noise and σ>0 is a known noise level. With the help of these observations we want to test

Our approach to this problem is based on estimating the following linear functionals:

for all h,t that are admissible, i.e., such that [t−h,t+h]⊆[0,1]. It is clear that θh,t(f)/h may be interpreted as approximations of the derivative f′(t) since

With the help of (1), the functionals θh,t(f) are estimated as follows:

and these estimates admit the obvious representation

based on the observations (2).

Let us denote for brevity

In order to explain our approach to the problem (3), we begin with the simple case assuming that h,t are given. So, we have to test two composite hypotheses

Intuitively, the most powerful test with the type I error probability

where tα is α

-value of the standard Gaussian distribution, i.e., a solution to

Of course, there exist a lot of motivations for this test. In this paper, we make use of the so-called improper Bayes approach assuming that θh,t in (2

) is a random variable uniformly distributed on the interval

Thus, we deal with the simple hypothesis testing and by the Neyman-Pearson lemma, the most powerful test at significance level α rejects Hh,t0 when

Taking the limit in this equation as A→∞, we arrive at the improper Bayes test that rejects Hh,t0 if

Since S(x) is decreasing in x∈R, the tests (4) and (5) are obviously equivalent.

In what follows, we will make use of the following asymptotic result:

Along with this method, one can apply the maximum likelihood (ML) or minimax approaches. Finally, all these methods result in (4) but their initial forms are different. For instance, the ML test rejects Hh,t0 when

Emphasize that from a viewpoint of testing Hh,t0 vs. Hh,t1 there is no difference between (8) and (5), but the aggregation of these methods for testing H0 vs. H1 from (3) results in different tests. In this paper, we make use of the tests defined by (5) since their aggregation is simple.

In order to aggregate the statistical tests, we will make use of the so-called multi-resolution approach assuming that

There are simple arguments motivating these assumptions

2 Testing at a given resolution level

Let us fix some bandwidth h∈H and denote for brevity by nh=1/(2h). In this section, we focus on testing

In order to construct Bayes and MAP tests, we assume that for given h∈H

With the arguments used in deriving (5), we get the following Bayes test: Hh0 is rejected if

where here PΘ stands for the measure generated by observations ^θh,t defined by (2) for given Θ={θh,t,h∈H,t∈Gh}.

and, thus, tBα may be computed as a solution to

Therefore our next step is to study the following random variable:

Let X1 and X2 be independent copies of a random variable X. Then X is said to be stable if for any constants a>0 and b>0 the random variable aX1+bX2 has the same distribution as cX+d for some constants c>0 and d.

The next theorem shows that the weak limit of Bh(ξ)−log(nh) is a 1-stable distribution.

In other words, this theorem states that

The probability distribution of ζ has the following invariance property that plays an important role in Bayes tests aggregation.

Let ζk be i.i.d. copies of ζ and ¯π be a probability distribution on Z+ with a bounded entropy. Then

Theorem 1 is not very informative about the tail behavior of the distribution of Bh(ξ). However, for obtaining a good approximation of tBα in (10) this behavior may play a crucial role because in some applications α may be very small (of order 10−7) and so, the Monte-Carlo method and Theorem 1 may not be good in this case.

Therefore our goal is to find an approximation of Bh(ξ) that controls well the tail of its distribution. Fortunately, this can be easily done. It is clear that

where Uk are i.i.d. random variables uniformly distributed on [0,1]. Hence

In other words, Ek∼Gamma(k,1). With this in mind, we obtain

Next, we make use of the following simple equations:

So, substituting them in (15), we arrive at the following theorem.

where εh is such that

The random variable ζ in Theorem 1 admits the following representation

Notice also that it follows immediately from (17) that convergence rate in Theorem 1 is log(nh)/√nh, i.e., as h→0,

computed with the help of the Monte-Carlo method with 0.5⋅106 replications. This picture shows that even for small nh=4 the approximation (17) works very good.

Similarly to the Bayes test, we can construct the MAP test that rejects Hh0 if

where tMα is defined as a solution to

Similarly to (9), tMα may be obtained from

As to the limit distribution of maxt∈GhS(ξh,t)/nh, as h→0, it follows immediately from (14) that

where ϰ is a standard exponential random variable and εh satisfies (18).

A heuristic idea behind our construction of multi-level MAP tests for (3) is related to (19) and consists in computing a positive deterministic function Uh,h∈H, bounding from above the random process log(1/ϰh),h∈H, where ϰh are independent standard exponential random variables. In other words, we are looking for Uh such that

would be a non-degenerate random variable.

Therefore with (19), upper bounding random process log(1/ϰh) by Uh, we arrive at the test that rejects H0 if

Computing qUα is based on the following simple fact. Assume that

The proof of this identity is very simple. Indeed,

Let us we denote

then (21) can be rewritten in the following form:

Let ¯π be a probability distribution on H. Then

and ¯π is a probability distribution on H.

In order to study the performance of this method, we analyze the type II error probability. For given

In other words, we consider the situation, where all shifts θh,t in (2) are positive except the only one. The position of the negative entry {ρ,τ} and its amplitude are unknown, but it is assumed that {ρ,τ} are random variables with the distribution defined by

In what follows, we will deal with priors ¯π with large uncertainties assuming that ¯π→0, or more precisely, suph∈H¯πh→0, but such that

In particular, we will consider the following class of prior distributions:

This class is characterized by the bandwidth ω>1 and the probability density ν(x), x∈R+, which is assumed to be continuous, bounded, and with

A typical example of a such distribution is the uniform one that corresponds to ν(x)=1,x∈[0,1].

Let us begin with the case, where the prior distribution is known, the case of unknown ¯π will be considered later in Section 4.

The type II error probability over Θρ,τ(A) of the MAP test (23) is defined as follows:

Our goal is to study the average type II error probability

The next theorem shows that Rh(qϰα,H¯π) is a critical signal/noise ratio. Roughly speaking, this means that if

for any given x>0, then the MAP multi-level test cannot discriminate between H0 and H1. Otherwise, if

for some ϵ>0, then reliable testing is possible.

To construct these tests, let us consider the following statistics:

When all θh,t=0, in view of Theorem 2, these random variables are approximated by the family of independent and identically distributed random variables ζ∘h,h∈H, defined by (16). An important property of this family is provided by (13), which is used in our construction multi-level Bayes tests. More precisely, the multi-level Bayes test rejects H0 if

The type II error probability over Θρ,τ(A) (see (24)) is defined by

Notice that as α→0

Therefore, since H¯π→∞ as ¯π→0, conditions (28) and (32) along with (30) and (34) are almost equivalent. This means that in the considered statistical problem there is no substantial difference between MAP and Bayes tests.

The main drawback of the MAP and Bayes tests is related to their dependence on the prior distribution ¯π that is hardly known in practice. Therefore our next goal is to construct a test that, on the one hand, does not depend on ¯π, but on the other hand, has a nearly optimal critical signal-noise ratio.

In order to simplify our presentation, we will deal with the class of prior distributions ¯πω,ν defined by (26). The entropy of ¯πω,ν obviously satisfies

and therefore denote for brevity

With (36), Condition (25) is checked easily and the next result follows immediately from Theorem 3.

In order to construct an adaptive test, let us compute a nearly minimal function Uh in (21). We begin with

and then iterate this function m times