Self-explaining text categorization requires a classifier to make a prediction along with supporting evidence. A popular type of evidence is sub-sequences extracted from the input text which are sufficient for the classifier to make the prediction. In this work, we define multi-granular ngrams as basic units for explanation, and organize all ngrams into a hierarchical structure, so that shorter ngrams can be reused while computing longer ngrams. We leverage a tree-structured LSTM to learn a context-independent representation for each unit via parameter sharing. Experiments on medical disease classification show that our model is more accurate, efficient and compact than BiLSTM and CNN baselines. More importantly, our model can extract intuitive multi-granular evidence to support its predictions. 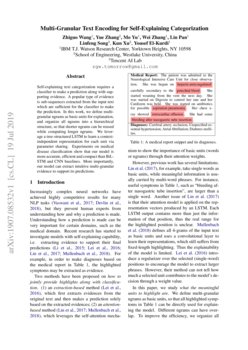 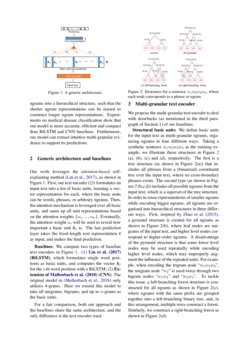 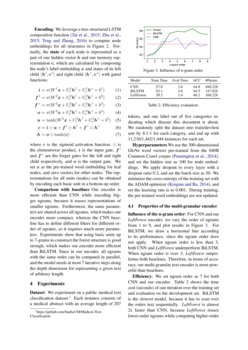 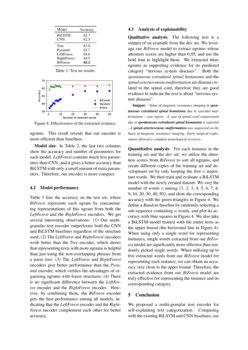 Are Shortest Rationales the Best Explanations for Human Understanding?

Two methods have been proposed on how to jointly provide highlights along with classification. (1) an extraction-based method (Lei et al., 2016), which first extracts evidences from the original text and then makes a prediction solely based on the extracted evidences; (2) an attention-based method (Lin et al., 2017; Mullenbach et al., 2018), which leverages the self-attention mechanism to show the importance of basic units (words or ngrams) through their attention weights.

However, previous work has several limitations. Lin et al. (2017), for example, take single words as basic units, while meaningful information is usually carried by multi-word phrases. For instance, useful symptoms in Table 1, such as “bleeding after nasogastric tube insertion”, are larger than a single word. Another issue of Lin et al. (2017)

is that their attention model is applied on the representation vectors produced by an LSTM. Each LSTM output contains more than just the information of that position, thus the real range for the highlighted position is unclear.

Mullenbach et al. (2018) defines all 4-grams of the input text as basic units and uses a convolutional layer to learn their representations, which still suffers from fixed-length highlighting. Thus the explainability of the model is limited. Lei et al. (2016) introduce a regularizer over the selected (single-word) positions to encourage the model to extract larger phrases. However, their method can not tell how much a selected unit contributes to the model’s decision through a weight value.

In this paper, we study what the meaningful units to highlight are. We define multi-granular ngrams as basic units, so that all highlighted symptoms in Table 1 can be directly used for explaining the model. Different ngrams can have overlap. To improve the efficiency, we organize all ngrams into a hierarchical structure, such that the shorter ngram representations can be reused to construct longer ngram representations. Experiments on medical disease classification show that our model is more accurate, efficient and compact than BiLSTM and CNN baselines. Furthermore, our model can extract intuitive multi-granular evidence to support its predictions.

Baselines: We compare two types of baseline text encoders in Figure 1. (1) Lin et al. (2017) (BiLSTM), which formulates single word positions as basic units, and computes the vector hi for the i-th word position with a BiLSTM; (2) Extension of Mullenbach et al. (2018) (CNN). The original model in Mullenbach et al. (2018) only utilizes 4-grams. Here we extend this model to take all unigrams, bigrams, and up to n-grams as the basic units.

For a fair comparison, both our approach and the baselines share the same architecture, and the only difference is the text encoder used.

We propose the multi-granular text encoder to deal with drawbacks (as mentioned in the third paragraph of Section 1) of our baselines.

Structural basic units: We define basic units for the input text as multi-granular ngrams, organizing ngrams in four different ways. Taking a synthetic sentence w1w2w3w4 as the running example, we illustrate these structures in Figure 2 (a), (b), (c) and (d), respectively. The first is a tree structure (as shown in Figure 2

(a)) that includes all phrases from a (binarized) constituent tree over the input text, where no cross-boundary phrases exists. The second type (as shown in Figure

2 (b,c,d)) includes all possible ngrams from the input text, which is a superset of the tree structure. In order to reuse representations of smaller ngrams while encoding bigger ngrams, all ngrams are organized into hierarchical structures in three different ways. First, inspired by Zhao et al. (2015), a pyramid structure is created for all ngrams as shown in Figure 2(b), where leaf nodes are unigrams of the input text, and higher level nodes correspond to higher-order ngrams. A disadvantage of the pyramid structure is that some lower level nodes may be used repeatedly while encoding higher level nodes, which may improperly augment the influence of the repeated units. For example, when encoding the trigram node “w1w2w3”, the unigram node “w2” is used twice through two bigram nodes “w1w2” and “w2w3”. To tackle this issue, a left-branching forest structure is constructed for all ngrams as shown in Figure 2(c), where ngrams with the same prefix are grouped together into a left-branching binary tree, and, in this arrangement, multiple trees construct a forest. Similarly, we construct a right-branching forest as shown in Figure 2(d).

Encoding: We leverage a tree-structured LSTM composition function Tai et al. (2015); Zhu et al. (2015); Teng and Zhang (2016) to compute node embeddings for all structures in Figure 2. Formally, the state of each node is represented as a pair of one hidden vector h and one memory representation c, which are calculated by composing the node’s label embedding x and states of its left child ⟨hl,cl⟩ and right child ⟨hr,cr⟩ with gated functions:

is the sigmoid activation function,

⊙ is the elementwise product, i is the input gate, fl and fr are the forget gates for the left and right child respectively, and o is the output gate. We set x as the pre-trained word embedding for leaf nodes, and zero vectors for other nodes. The representations for all units (nodes) can be obtained by encoding each basic unit in a bottom-up order.

Comparison with baselines Our encoder is more efficient than CNN while encoding bigger ngrams, because it reuses representations of smaller ngrams. Furthermore, the same parameters are shared across all ngrams, which makes our encoder more compact, whereas the CNN baseline has to define different filters for different order of ngrams, so it requires much more parameters. Experiments show that using basic units up to 7-grams to construct the forest structure is good enough, which makes our encoder more efficient than BiLSTM. Since in our encoder, all ngrams with the same order can be computed in parallel, and the model needs at most 7 iterative steps along the depth dimension for representing a given text of arbitrary length.

Dataset: We experiment on a public medical text classification dataset.111https://github.com/SnehaVM/Medical-Text-Classification Each instance consists of a medical abstract with an average length of 207 tokens, and one label out of five categories indicating which disease this document is about. We randomly split the dataset into train/dev/test sets by 8:1:1 for each category, and end up with 11,216/1,442/1,444 instances for each set.

Hyperparameters We use the 300-dimensional GloVe word vectors pre-trained from the 840B Common Crawl corpus Pennington et al. (2014), and set the hidden size as 100 for node embeddings. We apply dropout to every layer with a dropout ratio 0.2, and set the batch size as 50. We minimize the cross-entropy of the training set with the ADAM optimizer Kingma and Ba (2014), and set the learning rate is to 0.001. During training, the pre-trained word embeddings are not updated.

4.1 Properties of the multi-granular encoder

Influence of the n-gram order: For CNN and our LeftForest encoder, we vary the order of ngrams from 1 to 9, and plot results in Figure 3. For BiLSTM, we draw a horizontal line according to its performance, since the ngram order does not apply. When ngram order is less than 3, both CNN and LeftForest underperform BiLSTM. When ngram order is over 3, LeftForest outperforms both baselines. Therefore, in terms of accuracy, our multi-granular text encoder is more powerful than baselines.

Efficiency: We set ngram order as 7 for both CNN and our encoder. Table 2 shows the time cost (seconds) of one iteration over the training set and evaluation on the development set. BiLSTM is the slowest model, because it has to scan over the entire text sequentially. LeftForest is almost 2x faster than CNN, because LeftForest reuses lower-order ngrams while computing higher-order ngrams. This result reveals that our encoder is more efficient than baselines.

Model size: In Table 2, the last two columns show the accuracy and number of parameters for each model. LeftForest contains much less parameters than CNN, and it gives a better accuracy than BiLSTM with only a small amount of extra parameters. Therefore, our encoder is more compact.

The following text is a snippet of an example from the dev set. We leverage our BiForest model to extract ngrams whose attention scores are higher than 0.05, and use the bold font to highlight them. We extracted three ngrams as supporting evidence for its predicted category “nervous system diseases”. Both the spontaneous extradural spinal hematoma and the spinal arteriovenous malformation are diseases related to the spinal cord, therefore they are good evidence to indicate the text is about “nervous system diseases”.

For each instance in the training set and the dev set, we utilize the attention scores from BiForest to sort all ngrams, and create different copies of the training set and development set by only keeping the first n important words. We then train and evaluate a BiLSTM model with the newly created dataset. We vary the number of words n among {1, 2, 3, 4, 5, 6, 7, 8, 9, 10, 20, 30, 40, 50}, and show the corresponding accuracy with the green triangles in Figure 4. We define a Random baseline by randomly selecting a sub-sequence containing n words, and plot its accuracy with blue squares in Figure 4. We also take a BiLSTM model trained with the entire texts as the upper bound (the horizontal line in Figure 4). When using only a single word for representing instances, single words extracted from our BiForest model are significantly more effective than randomly picked single words. When utilizing up to five extracted words from our BiForest model for representing each instance, we can obtain an accuracy very close to the upper bound. Therefore, the extracted evidence from our BiForest model are truly effective for representing the instance and its corresponding category.

We proposed a multi-granular text encoder for self-explaining text categorization. Comparing with the existing BiLSTM and CNN baselines, our model is more accurate, efficient and compact. In addition, our model can extract effective and intuitive evidence to support its predictions.