Supervised learning algorithms trained on medical images will often fail to generalize across changes in acquisition parameters. Recent work in domain adaptation addresses this challenge and successfully leverages labeled data in a source domain to perform well on an unlabeled target domain. Inspired by recent work in semi-supervised learning we introduce a novel method to adapt from one source domain to n target domains (as long as there is paired data covering all domains). Our multi-domain adaptation method utilises a consistency loss combined with adversarial learning. We provide results on white matter lesion hyperintensity segmentation from brain MRIs using the MICCAI 2017 challenge data as the source domain and two target domains. The proposed method significantly outperforms other domain adaptation baselines. 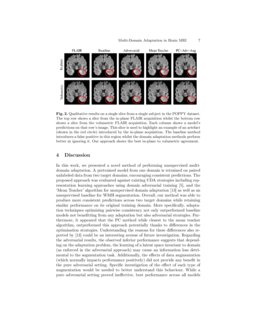 [8]. Among these tools, deep learning frameworks exhibit excellent performance (often described as ‘superhuman’) when applied on images drawn from the same distribution (scanner type, parameters, patient pool etc.) as the one used in training the model. However, the performance may deteriorate drastically when the algorithm is applied in previously unseen domains. This performance gap is a critical barrier to the safe implementation and widespread adoption of these techniques in clinical practice.

The process of adapting a model from a ‘source’ domain to a target domain is called ‘domain adaptation’. Successful methods have included:

Methods 2 to 4 fall under the purview of ‘Unsupervised Domain Adaptation’ (UDA), as does the presented work. In general, UDA does not rely on labeled training examples from the desired target domain. This is especially desirable in medical imaging, where labelling is time-consuming and highly variable, and the ‘domain’ depends on scanner manufacturer, acquisition protocol and reconstruction strategy. The augmentations required to create the perturbed input data can either be generic (geometric or contrast operations) or application-specific. In the context of medical imaging, the latter includes physics-based image augmentation, synthetic bias field addition or registration-based approaches [14]. These methods lean on domain-specific knowledge to generate plausible transformations.

We propose a UDA pipeline applied to the segmentation of white matter hyperintensities (WMH) which introduces a paired consistency (PC) loss which guides the adaptation. The proposed (PC) method enforces the output consistency between the results obtained on two separate acquisitions per subject: an in-plane and a volumetric FLAIR sequence. We aim to 1) segment WMH lesions on completely unlabeled examples and 2) to make these predictions similar between the in-plane and volumetric cases. In other words, we regularize the fitting by explicitly promoting similarity in the labels generated by each FLAIR acquisition. This adaptation method was supplemented with an adversarial loss in order to prevent the model from getting stuck in bad local minima. After an overview of the proposed approach and its variants in section 2, we present the experiments which show that our proposed method leverages the unlabeled data to produce more consistent lesion segmentations across all domains.

that aims at minimizing the Kullback-Leibler divergence

between the output probability distribution

y when conditioned on the unlabeled input x from the set U or its augmented countrapart ^x drawn from q(^x|x).

We trained networks using Ltot as specified in (2) and denote them as PC. These networks fθ(h|x) produce a feature representation h from which ^y is calculated.

Preventing trivial solutions: Early in our experiments, we encountered a specific degenerate solution: our network was able to produce one solution for source images (a good lesion mask) while producing a trivial result on the target domain (in this case, a mask of the foreground). This meant that there was good agreement between in-plane and volumetric FLAIRs because they simply segmented foreground — ignoring the lesions altogether. This means that the network was identifying the domain of the images and using this to inform its solution: undesirable behaviour. We introduced an additional adversarial term to avoid these ‘solutions’. Inspired by the domain adversarial literature (methods 2 in section 1) we propose an adversarial loss to minimize the amount of information about domain contained in h. We introduce a discriminator dΩ which takes h as input and outputs a domain prediction ^d. The adversarial loss, Ladv is given by the cross-entropy, Ladv=−∑ni=1Lice(di,^di) where n is the number of domains, Lice is the multi-class cross entropy loss, d

is a one-hot encoded vector of the domain label and

^d is the model’s domain prediction as in [11]. We use a gradient reversal layer as in [5] in order to minimize Ltot whilst maximizing Ladv. Figure 1 presents the diagram of the proposed method with the combination of different losses, where β controls the strength with which the model is adapting its features whereas α controls the weights the consistency effect.

Augmentation: In [13] the authors suggest various properties of augmented samples necessary for performing Unsupervised Data Augmentation. Samples should be realistic, valid (meaning they should not alter the underlying label), smooth, diverse and make use of targeted inductive biases (domain knowledge). In the absence of sufficiently realistic augmentation functions we use paired scans which are considered as augmented samples. However, taking them as they are makes for a discrete augmentation function with discontinuous jumps. In order to encourage continuity we used a large range of augmentations on the paired data, including generic geometric transformations and MR specific non-geometric transformations. Geometric augmentations were sampled independently and combined as one affine transform, using random rotations (all axis ranging from -10 to 10 degrees), random shears ([0.5,0.5]) and random scaling ([0.75,1.5]). For the non-geometric augmentations we applied k-space motion artefact augmentation as described in [12] and bias field augmentation as implemented in [3]. We measure how useful these additional augmentations are in our experiments.

In this work we focus on white matter hyperintensity segmentation. The data comes from two separate studies. As a source domain we use the White Matter Hyperintensity challenge data presented in MICCAI 2017 [6]. The other dataset was used as target domain and comes from a sub-study within the Pharmacokinetic and Clinical Observations in PeoPle over fiftY (POPPY) [4]. In this study two different FLAIR sequences were acquired during the same MR session for all 72 subjects on a Philips 3T scanner. The in-plane FLAIR was an axial acquisition with 3mm slice thickness and 1mm2 planar resolution (Repetition time (TR) 8000ms, Inversion time (TI) 2400 ms and echo time (TE) 125 ms) while the volumetric FLAIR was of resolution 1.04×1.04×0.56 mm3 (TR=8000ms TI=1650ms TE=282ms). Both images were rigidly coregistered to the 1mm3 T1 sequence acquired during the session. All individuals were male with mean age of 59.1±6.9 yrs, including HIV-positive subjects and population-matched controls.

The MICCAI Challenge dataset was split with a train:validation:test assignment of 40:10:10 subjects. For the POPPY dataset, the split was 38:15:20.

Training was done using 2d axial slices of size 256×256 with inference carried out by concatenating the predictions across all slices to form a 3d volume. The segmentation network uses the U-Net architecture [10]

with depth of 4 and a maximum number of filters of 256 at the deepest layer, with ReLU as the activation function. Initial training on the MICCAI dataset only was performed using the Adam optimizer with an initial learning rate

is a multiplicative factor of learning rate decay) at epoch 300 and 350. The validation set is used for early stopping, thus the baseline model takes the network configuration at the epoch where it showed the highest accuracy on the validation set. All adaptation models and adversarial models were initialized with the weights of this trained baseline model.

The choice of α parameter balancing the segmentation and the consistency loss in the domain adaptation runs proved to be important. Generally, high values of α led to degenerate solutions, where predictions on the target dataset were no longer capturing lesions. Since scheduling a slowly increasing α did not help, α was fixed at 0.2 in all experiments.

In case of an adversarial setting, empirical assessment of the best choice of architecture for the discriminator led to the following choice: four 2D convolutional layers with a kernel size of 3×

3 and a stride of 2 followed by batch normalisation and leaky ReLU activation. The number of output channels is 4 to begin with and doubles at each layer to a total of 32. Finally, there are three fully connected layers with output sizes of 64, 32, and 2 with relu activations and dropout applied (

For the final results table checkpoints were chosen for each of the experiments by looking at the performance across the validation set.

As a first metric of consistency, we compute the Dice score overlap between the two volumes. However, high dice agreement may arise without predicting lesions, for instance with the segmentation of foreground or of another anatomical structure. Such degenerate solutions can indeed occur as the consistency term in the loss can be minimized for any consistent prediction between volumes.

As there are no lesion segmentations for the POPPY dataset, we use the known association between age and white matter hyperintensity load reported for this dataset [4] as surrogate evaluation that the segmented elements are lesions. The effect size is a useful metric for determining whether the lesion loads predicted by the various models agree with the reported literature. For the eight compared models, the effect size ranged from 1.2-fold to 1.5-fold increase in lesion load normalized by total intracranial volume per decade. This compares well with the reported effect size on the POPPY dataset of 1.4-fold with a 95thconfidence interval of [1.0;2.0]. Predictions from in-plane POPPY and volumetric POPPY were compared using the dice overlap, the 95th percentile Hausdorff distance measured in mm (HD95), the recall (or sensitivity), the ratio of difference in volume between the two predictions (VD) as was used in [6].

The results, gathered in Table 1, reporting median and interquartile range are ordered according to the average significance ranking, follows the guidelines of the MICCAI Decathlon challenge 2018 111 http://medicaldecathlon.com/files/MSD-Ranking-scheme.pdf.

In this work, we presented a novel method of performing unsupervised multi-domain adaptation. A pretrained model from one domain is retrained on paired unlabeled data from two target domains, encouraging consistent predictions. The proposed approach was evaluated against existing UDA strategies including representation learning approaches using domain adversarial training [5], and the ‘Mean Teacher’ algorithm for unsupervised domain adaptation [13] as well as an unsupervised baseline for WMH segmentation. Overall, our method was able to produce more consistent predictions across two target domains while retaining similar performance on its original training domain. More specifically, adaptation techniques optimizing pairwise consistency not only outperformed baseline models not benefitting from any adaptation but also adversarial strategies. Furthermore, it appeared that the PC method while closest to the mean teacher algorithm, outperformed this approach potentially thanks to differences in the optimisation strategies. Understanding the reasons for these differences also reported by [13] could be an interesting avenue of future investigation. Regarding the adversarial results, the observed inferior performance suggests that depending on the adaptation problem, the learning of a latent space invariant to domain (as enforced in the adversarial approach) may cause an information loss detrimental to the segmentation task. Additionally, the effects of data augmentation (which normally impacts performance positively) did not provide any benefit in the pure adversarial setting. Specific investigation of the effect of each type of augmentation would be needed to better understand this behaviour. While a pure adversarial setting proved ineffective, best performance across all models was obtained when combining it with our proposed PC strategy as it promoted a good label distribution in our target images. Future work will focus on removing the need for paired data by finding sufficiently realistic augmentation functions.

In conclusion, PC is a promising method to adapt automated image segmentation tools to different scanner manufacturers, MR sequences and other confounds. This adaptation is critical to the clinical translation of these tools notably in the context of scanner upgrades and multicentre trials.

We gratefully acknowledge the support of NVIDIA Corporation with the donation of one Titan Xp. This project has received funding from the EU H2020 under the Marie Skłodowska-Curie grant agreement No 721820, Wellcome Flagship Programme (WT213038/Z/18/Z) and Wellcome EPSRC CME (WT203148/Z/16/Z). Carole H. Sudre is supported by AS-JF-17-011 Alzheimer’s Society Junior Fellowship.