This paper was originally submitted to Xinova as a response to a Request for Invention (RFI) on new event monitoring methods. In this paper, a new object tracking algorithm using multiple cameras for surveillance applications is proposed. The proposed system can detect sudden-appearance-changes and occlusions using a hidden Markovian statistical model. The experimental results confirm that our system detect the sudden-appearance changes and occlusions reliably. 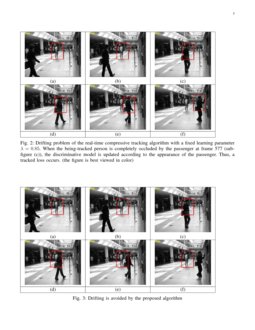 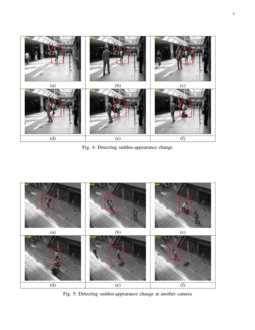 One situation that the visual tracking systems for the surveillance applications may deal with frequently is the sudden-appearance-changes of the being tracked person or object. For example, the suspicious person may take off his/her jacket, pull up his/her hood, or abandon some luggage, in order to fool the surveillance system. Such sudden-appearance-changes are suspicious activities and usually should be reported to the security personnel in real-time.

Unfortunately, it is usually difficult for computer vision algorithms to distinguish between a sudden-appearance-change to occlusions. For many surveillance applications, the surveillance scenes are usually crowded with many people. Thus, occlusions may happen very frequently. Without the ability of distinguishing between sudden-appearance-changes to occlusions, the visual tracking systems may generate a large number of false alarms.

Detecting occlusions correctly is also important for enhancing the reliability of visual tracking algorithms. It is well-known that for visual tracking, there exists a so called “high-adaptability-to-drifting-resistance trade-off” problem. The problem relates to how much we should update our models for the being-tracked person or object on-the-fly. If we do not update the models much, then in the case that the appearance of the being tracked person changes rapidly, there is a high risk of tracking loss. If we always update the models very rapidly, then in the case of occlusions, the model may be tuned to occulders. And these wrongly tuned models may result in the so called drifting. That is, the tracking algorithm may start to track the occulders instead. In Fig. 2 of section IV, we actually show an example of such drifting phenomena.

Our method uses both generative and discriminative models for the video frame streams. For each camera, one discriminative model is maintained for discriminating the image patches that contain the being-tracked person to the image patches that do not contain the being-tracked person. Similarly, one generative model is maintained for each camera. In this paper, we use a recently proposed compressive sensing and naive Bayes based classier in

as the discriminative model. We use linear sub-space models as the generative models. That is, we assume that the image patches containing the being-tracked person from several adjacent video frames all are vectors within a certain affine sub-space.

A center component of our method is a hidden Markovian model for the prediction errors of the generative models. That is, whenever a new video frame is received, the new image patch containing the being-tracked person is predicted from the previous such image patches. The hidden Markovian model thus contains a visible part and a hidden part. The visible part contains the observed prediction errors. And the hidden part contains random variables

We assume some parametric probability distributions for the hidden Markovian model. The probabilities of

On(t) and S(t) are estimated from the observed prediction error zn(t) by using sequential Bayesian estimation. An alarm signal may be raised, if we detect a high probability of S(t)=1, a sudden-appearance-change occurred. The estimated probabilities of On(t) and S(t) are also used for adjusting the learning rates of the discriminative and generative models. It should be intuitively clear that any appearance-change of the being tracked objects may result in significant prediction errors at the same time at all the cameras, but occlusions usually result in significant prediction errors only at a few cameras. Their probabilities can thus be estimated accordingly.

Please note that the above hidden Markovian statistical model is the centerpiece of the proposed occlusion and sudden-appearance-change detection methods. The statistical model works also well with other discriminative and generative models.

There is a large literature on visual tracking algorithms, such as [2], [3], [4]. We have no intention here to provide a throughout survey on the general visual tracking algorithms. The approaches of using multiple cameras for visual tracking have become attractive in the recent years, due to the availability of large quantities of low-cost commodity cameras. There are some previous discussions on visual tracking using multiple cameras. In [5] [6], approaches are discussed, where the responsibilities of tracking may be passed from one camera to another camera. In [7], from each camera, a statistical estimation of the location of the being tracked person or object is obtained independently. The independent estimations are then fused into a joint location estimation. In [8], video frames from multiple cameras are projected on a reference frame using homography transforms, such that the signals corresponding to the being tracked person or object may be added constructively.

(shown as classifiers in Fig.

1 ). All such real-time tracking sub-systems work almost independently, except that their learning parameters λ are controlled by the center controller.

Our proposed method adjusts the learning parameters λ based on the probabilities of sudden-appearance-change P[S(t)] and the probabilities of occlusions P[On(t)]. Let us assume that we use N security cameras. Suppose at each time t=1,2,…, we receive one video frame xn(t) at each camera, where 1≤n≤N. Each tracking sub-system then finds one image patch Yn(t) that contains the being-tracked person, where Yn(t) is a column vector. That is, Yn(t) is the vector obtained by stacking the pixels in the image patch.

based on the following hidden Markovian model. We assume that the probability density function of

is uniformly distributed between

We use one of the PETS 2007 (Tenth IEEE International Workshop on Performance Evaluation of Tracking and Surveillance) data-sets (available from http://www.cvg.reading.ac.uk/PETS2007/data.html). The data-set consists of 12000 video frames for 4 cameras, 3000 video frames for each camera. A suspicious person enters the scene at roughly frame 500 and drops and leaves behind his backpack at roughly frame 850.

We observe that the real-time compressive tracking systems with a fixed learning parameter in the prior art [1] do have the drifting problem as shown in Fig. 2. We show in Fig. 3 that such drifting problem can be avoided by the algorithm proposed in this paper. The occlusion event around frame 577 is detected by our algorithm very clearly with the corresponding probability close to 1.

The proposed algorithm also detects the unusual behavior of the being-tracked person at frame 851 (with the corresponding probability higher than 0.9). The proposed algorithm is able to track the where-about of the suspicious person as shown in Figs. 4, and 5, where each figure shows the tracking results at one camera.

In all the above experimental results, the tracking results are shown as red bounding boxes. And the frame indexes are labelled in all the images.

This research was originally submitted to Xinova, LLC by the author in response to a Request for Invention. It is among several submissions that Xinova has chosen to make available to the wider community. The author wishes to thank Xinova, LLC for their funding support of this research. More information about Xinova, LLC is available at www.xinova.com.