In this paper, we consider the issue of covert communications with random access protocol. We consider that the legitimate user Bob has no priori knowledge about packet arrival time and thus employs data-aided frame detection based on reference sequence. The warden user Willie tries to detect this covert communication by using a radiometer. The detection performance analysis is provided for both Bob and Willie under Rayleigh fading channel. It is demonstrated that the covert performance can benefit from the increase of the frame length or the number of receive antennas from frame detection perspective. Numerical results are provided to verify the proposed studies. 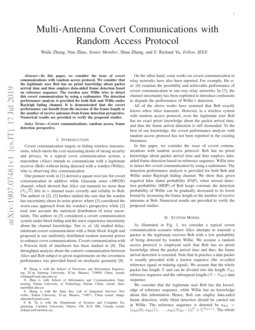 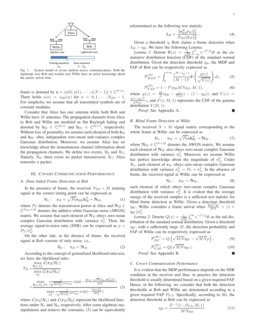 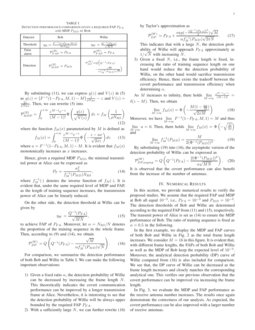 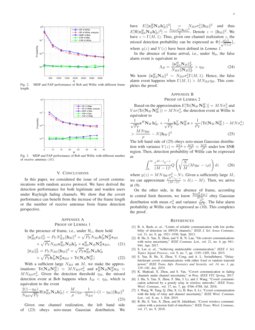 Covert communication targets at hiding wireless transmissions, which meets the ever-increasing desire of strong security and privacy. In a typical covet communication system, a transmitter (Alice) intends to communicate with a legitimate receiver (Bob) without being detected with a warden (Willie), who is observing this communication.

One pioneer work in [1] derived a square root law for covert communication in additive white Gaussian noise (AWGN) channel, which showed that Alice can transmit no more than O(√n) bits in n channel users covertly and reliably to Bob. The authors in [3, 2] further studied the case that the warden has uncertainty about its noise power, where [3] considered the worst-case approach from the warden’s perspective while [2] took into account the statistical distribution of noise uncertainty. The authors in [5] considered a covert communication system under block fading and the users experience uncertainty about the channel knowledge. Yan et. al. [4]

[8]. The throughput analysis about the convert communication between Alice and Bob subject to given requirements on the covertness performance was provided based on stochastic geometry [8].

On the other hand, some works on covert communication in relay networks have also been reported. For example, Hu et. al. [6] examine the possibility and achievable performance of covert communication in one-way relay networks. In [7], the channel uncertainty has been exploited to introduce confusions to degrade the performance of Willie’s detection.

All of the above works have assumed that Bob exactly knows when Alice transmits. However, in a wireless system with random access protocol, even the legitimate user Bob has no exact priori knowledge about the packet arrival time, and thus the frame arrival detection is still demanded. To the best of our knowledge, the covert performance analysis with random access protocol has not been reported in the existing literatures.

In this paper, we consider the issue of covert communications with random access protocol. Bob has no priori knowledge about packet arrival time and thus employs data-aided frame detection based on reference sequence. Willie tries to detect this covert communication by using a radiometer. The detection performance analysis is provided for both Bob and Willie under Rayleigh fading channel. We show that, given required false alarm probability (FAP), when missed detection probability (MDP) of Bob keeps constant, the detection probability of Willie can be gradually decreased to its lower bound by increasing the frame length or the number of receive antennas at Bob. Numerical results are provided to verify the proposed studies.

As illustrated in Fig. 1, we consider a typical covert communication scenario where Alice attempts to transmit a packet to the legitimate receiver Bob with a low probability of being detected by warden Willie. We assume a random access protocol is employed such that Bob has no priori knowledge about the packet arrival time and thus, the frame arrival detection is essential. Note that in practice a data packet is usually preceded with a known sequence (the so-called reference signal or training signal). We assume that the whole packet has length N and can be divided into the length-NRS reference sequence and the subsequent length-(N−NRS) data sequence.

We consider that the legitimate user Bob has the knowledge of reference sequence, while Willie has no knowledge about this information. Hence, Bob can employ data-aided frame detection, while blind detection should be carried out at Willie. The reference sequence is denoted by sRS=[sRS(0),sRS(1),⋯,sRS(NRS−1)]T∈CNRS×1. The whole frame is denoted by s=[s(0),s(1),⋯,s(N−1)]∈CN×1. There holds s(n)=sRS(n) for n=0,1,⋯,NRS−1. For simplicity, we assume that all transmitted symbols are of constant modulus.

Consider that Alice has one antenna while both Bob and Willie have M antennas. The propagation channels from Alice to Bob and Willie are modeled as flat Rayleigh fading and denoted by hB∈CM×1 and hW∈CM×1, respectively. Without loss of generality, we assume each element of both hB and hW

In the presence of frame, the received NRS×M training signal at the correct timing point can be expressed as

where PT denotes the transmission power at Alice and NB∈CNRS×M denotes the additive white Gaussian noise (AWGN) matrix. We assume that each element of NB obeys zero-mean complex Gaussian distribution with variance σ2n. Then, the average signal-to-noise ratio (SNR) can be expressed as ρ=PT/σ2n.

On the other side, in the absence of frame, the received signal at Bob consists of only noise, i.e.,

where L(rB|H1) and L(rB|H0) represent the likelihood functions under H1 and H0, respectively. After some algebraic manipulations and remove the constants, (III-A

) can be equivalently reformulated as the following test statistic:

Given a threshold η, Bob claims a frame detection when ΛB>ηB. We have the following Lemma:

as the cumulative distribution function (CDF) of the standard normal distribution. Given the detection threshold

ηB, the MDP and FAP of Bob can be respectively expressed as

represents the CDF of the gamma distribution

each element of which obeys zero-mean complex Gaussian distribution with variance σ2n. It is evident that the average energy of the received samples is a sufficient test statistic for blind frame detection at Willie. Given a detection threshold ηW, Willie considers a frame arrival when Tr(rHr)MN>(1+ηW)σ2n.

Lemma 2: Denote Q(x)=1√2π∫∞xe−t2/2dt as the tail distribution of the standard normal distribution. Given a threshold ηW, with a sufficiently large M, the detection probability and FAP of Willie can be respectively expressed as

where the function fM(x) parameterized by M is defined as

where a=F−1(1−PFA,M,1)−M. It is evident that fM(x) monotonically increases as x increases.

Hence, given a required MDP PMD, the minimal transmitted power at Alice can be expressed as

where f−1M(⋅) denotes the inverse function of fM(⋅). It is evident that, under the same required level of MDP and FAP, as the length of training sequence increases, the transmission power of Alice can be linearly reduced.

On the other side, the detection threshold at Willie can be given by

to achieve FAP of PFA. Moreover, let α=NRS/N denotes the proportion of the training sequence in the whole frame. Then, according to (9) and (14), we obtain

For comparison, we summarize the detection performance of both Bob and Willie in Table I. We can make the following important observations:

By substituting (19) into (16), the asymptotic version of the detection probability of Willie can be expressed as

It is observed that the covert performance can also benefit from the increase of the number of antennas.

In this section, we provide numerical results to verify the proposed studies. We assume that the required FAP and MDP at Bob all equal 10−3, i.e., PFA=10−3 and PMD=10−3. The detection thresholds of Bob and Willie are determined according to the required FAP from (11) and (15), respectively. The transmit power of Alice is set as (14) to ensure the MDP performance of Bob. The ratio of training sequence is fixed as α=0.5 in the following.

In the first example, we display the MDP and FAP curves of both Bob and Willie in Fig. 2 as the total frame length increases. We consider M=16 in this figure. It is evident that, with different frame lengths, the FAPs of both Bob and Willie as well as the MDP of Bob keep the expected level of 10−3. Moreover, the analytical detection probability (DP) curve of Willie computed from (16) is also included for comparison. We see that, the DP curve of Willie can be decreased as the frame length increases and closely matches the corresponding analytical one. This verifies our previous observation that the covert performance can be improved via increasing the frame length.

In Fig. 3, we evaluate the MDP and FAP performance as the receive antenna number increases. The results once again demonstrate the correctness of our analysis. As expected, the covert performance can be also improved with a larger number of receive antennas.

In this paper, we considered the issue of covert communications with random access protocol. We have derived the detection performance for both legitimate and warden users under Rayleigh fading channels. We show that the covert performance can benefit from the increase of the frame length or the number of receive antennas from frame detection perspective.

In the presence of frame, i.e., under H1, there hold

With a sufficient large NRS an M, we make the approximations: Tr(NBNHB)≃MNRSσ2n and sHBNBNHBsB≃MNRSσ2n. Given the detection threshold ηB, the missed detection event at Bob happens when ΛB<ηB, which is equivalent to the event

In the absence of frame arrival, i.e., under H0, the false alarm event is equivalent to

We know ∥sHRSNB∥2∼NRSσ2nΓ(M,1). Hence, the false alarm event happens when Γ(M,1)>MNRSηB. This completes the proof.

Appendix B Proof of Lemma 2

Based on the approximation E[Tr(NWNHW)]=MNσ2n and Var(Tr(NWNHW))=MNσ4n, the detection event at Willie is equivalent to

The left hand side of (B) obeys zero-mean Gaussian distribution with variance V(z)=2Nzρ+MNρ2≃MNρ2 under low SNR region. Then, detection probability of Willie can be expressed as

On the other side, in the absence of frame, according to central limit theorem, we know

Tr(rHWrW)MN obey Gaussian distribution with mean σ2n and variance σ4nMN. The false alarm probability at Willie can be expressed as (10). This completes the proof.