We introduce a new mathematical model of multi-agent reinforcement learning, the Multi-Agent Informational Learning Processor "MAILP" model. The model is based on the notion that agents have policies for a certain amount of information, models how this information iteratively evolves and propagates through many agents. This model is very general, and the only meaningful assumption made is that learning for individual agents progressively slows over time. 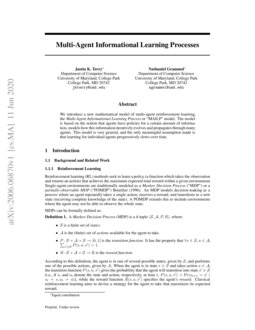 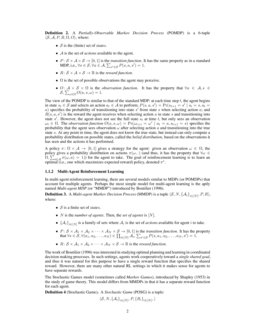 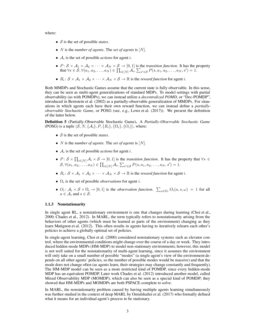 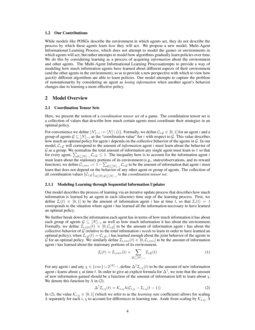 Reinforcement learning (RL) methods seek to learn a policy (a function which takes the observation and returns an action) that achieves the maximum expected total reward within a given environment. Single-agent environments are traditionally modeled as a Markov Decision Process (“MDP”) or a partially-observable MDP (“POMDP”) Boutilier [1996]. An MDP models decision-making as a process where an agent repeatedly takes a single action, receives a reward, and transitions to a new state (receiving complete knowledge of the state). A POMDP extends this to include environments where the agent may not be able to observe the whole state.

MDPs can be formally defined as:

A Markov Decision Process (MDP) is a 4-tuple ⟨S,A,P,R⟩, where:

gives the probability that the agent will transition into state

s′∈S (i.e., if st and at denote the state and action, respectively, at time t, P(s,a,s′)=Pr(st+1=s′∣st=s,at=a)), while the reward function R(s,a,s′) specifies the agent’s reward. Classical reinforcement learning aims to devise a strategy for the agent to take that maximizes its expected reward.

A Partially-Observable Markov Decision Process (POMDP) is a 6-tuple ⟨S,A,P,R,Ω,O⟩, where:

. At any point in time, the agent does not know the true state, but instead can only compute a probability distribution on possible states, called the

belief distribution, based on the observations it has seen and the actions it has performed.

A policy π:Ω×A→[0,1] gives a strategy for the agent: given an observation ω∈Ω, the policy gives a probability distribution on actions π(ω,⋅) (and thus, it has the property that ∀ω∈Ω,∑a∈Aπ(ω,a)=1)) for the agent to take. The goal of reinforcement learning is to learn an optimal (i.e., one which maximizes expected reward) policy, denoted π∗.

In multi-agent reinforcement learning, there are several models similar to MDPs (or POMDPs) that account for multiple agents. Perhaps the most simple model for multi-agent learning is the aptly named Multi-agent MDP (or “MMDP”) introduced by Boutilier [1996].

A Multi-agent Markov Decision Process (MMDP) is a tuple ⟨S,N,{Ai}i∈[N],P,R⟩, where:

The work of Boutilier [1996] was interested in studying optimal planning and learning in coordinated decision making processes. In such settings, agents work cooperatively toward a single shared goal, and thus it was natural for this purpose to have a single reward function that specifies the shared reward. However, there are many other natural RL settings in which it makes sense for agents to have separate rewards.

in the study of game theory. This model differs from MMDPs in that it has a separate reward function for each agent.

A Stochastic Game (POSG) is a tuple:

Both MMDPs and Stochastic Games assume that the current state is fully observable. In this sense, they can be seen as multi-agent generalizations of standard MDPs. To model settings with partial observability (as with POMDPs), we can instead utilize a decentralized POMD, or “Dec-POMDP”, introduced in Bernstein et al. [2002] as a partially-observable generalization of MMDPs. For sitauations in which agents each have their own reward function, we can instead define a partially-observable Stochastic Game, or POSG (see, e.g., Lowe et al. [2017]). We present the definition of the latter below.

In single agent RL, a nonstationary environment is one that changes during learning [Choi et al., 2000, Chades et al., 2012]. In MARL, the term typically refers to nonstationarity arising from the behaviors of other agents (which must be learned as parts of the environment) changing as they learn Matignon et al. [2012]. This often results in agents having to iteratively relearn each other’s policies to achieve a globally optimal set of policies.

In single-agent learning, Choi et al. [2000] considered nonstationary systems such as elevator control, where the environmental conditions might change over the course of a day or week. They introduced hidden-mode MDPs (HM-MDP) to model non-stationary environments; however, this model is not well suited for the nonstationarity of multi-agent learning, since it assumes the environment will only take on a small number of possible “modes” (a single agent’s view of the environment depends on all other agents’ policies, so the number of possible modes would be massive) and that the mode does not change often (as agents learn, their strategies may change constantly and frequently). The HM-MDP model can be seen as a more restricted kind of POMDP, since every hidden-mode MDP has an equivalent POMDP. Later work Chades et al. [2012] introduced another model, called Mixed Observability MDP (MOMDP), which can also be seen as a special kind of POMDP; they showed that HM-MDPs and MOMDPs are both PSPACE-complete to solve.

In MARL, the nonstationarity problem caused by having multiple agents learning simultaneously was further studied in the context of deep MARL by Omidshafiei et al. [2017] who formally defined what it means for an individual agent’s process to be stationary.

While models like POSGs describe the environment in which agents act, they do not describe the process by which these agents learn how they will act. We propose a new model, Multi-Agent Informational Learning Process, which does not attempt to model the games or environments in which agents will act, but rather attempts to model how algorithms gradually learn policies over time. We do this by considering learning as a process of acquiring information about the environment and other agents. The Multi-Agent Informational Learning Processattempts to provide a way of modeling how much information agents have learned about different aspects of their environment (and the other agents in the environment), so as to provide a new perspective with which to view how quickly different algorithms are able to learn policies. Our model attempts to capture the problem of nonstationarity by considering an agent as losing information when another agent’s behavior changes due to learning a more effective policy.

Here, we present the notion of a coordination tensor set

of a game. The coordination tensor set is a collection of values that describe how much certain agents must coordinate their strategies in an optimal policy.

For convenience we define [N]−i:=[N]∖{i}. Formally, we define Ci,G∈[0,1] for an agent i and a group of agents G⊆[N]−i as the “coordination value” for i with respect to G. This value describes how much an optimal policy for agent i depends on the collective behavior of the agents in G. In our model, Ci,G will correspond to the amount of information agent i must learn about the behavior of G as a group. We normalize the total amount of information any single agent must learn to 1 so that for every agent, ∑G⊆[N]−iCi,G≤1. The inequality here is to account for the information agent i must learn about the stationary portions of its environment (e.g., states/observations, and its reward function); we define Ci,env:=1−∑G⊆[N]−iCi,G to be the amount of information that agent i must learn that does not depend on the behavior of any other agent or group of agents. The collection of all coordination values {Ci,G}i∈[N],G⊆[N]−i is the coordination tensor set.

Our model describes the process of learning via an iterative update process that describes how much information is learned by an agent in each (discrete) time step of the learning process. First, we define Ii(t)∈[0,1] to be the amount of information agent i has at time t, so that Ii(t)=1 corresponds to the situation where agent i has learned all the information necessary to have learned an optimal policy.

In (2), the value Ki,χ∈[0,1] (which we refer to as the learning rate coefficient) allows for scaling Λ separately for each i,χ to account for differences in learning rate. Aside from scaling by Ki,χ, Λ should be the same for all agents, because the shape of this “learning curve” will depend on factors that are independent of the agents involved, such as properties of the learning algorithm itself; across different agents, only the rate of learning (i.e., the “steepness” of this curve) may change, which is accounted for by the scaling factor Ki,χ.

Next, consider a situation where Ki,χ=1 (a very optimistic learning rate, for the sake of example), and Λ(x)=x. In this case Δ↑i,χ(t)=Ci,χ−Ii,χ(t); that is, agent i learns all the remaining unlearned information about χ. Learning everything in a single time step is the best any algorithm can ever hope for and no algorithm can do better than this. Thus, we restrict our interest to functions where Λ(x)<x for all x∈[0,1] (in practice, Λ will likely be much smaller).

We will find it useful to refer to the total information gain of agent i at time t, which we shall write as Δ↑Ii(t).

In the following section, we will refer to a quantity denoted Δ↑IG, and similarly to IG. This quantity represents the amount of information the agents of a group G⊆[N]−i jointly have about each other.

Similar to information gain, we can write the total amount of information lost by agent i at time step t as Δ↓Ii(t)=∑G⊆−iΔ↓Ii,G(t).

With Δ↑ and Δ↓ defined, we can now fully specify the information update process. Specifically, we define Ii,χ(t) as a recurrence relation below.

Our model is incredibly general as it depends on many parameters that specify properties of both the game to be learned and the learning algorithm used to learn the policies of agents. An instance of this model (which we call a Multi-Agent Informational Learning Process) can be fully specified by all of the parameters described above, which we summarize in Definition 6 below.

A Multi-Agent Informational Learning Process (MAILP) is a fully specified by: