The decomposition of time series into components is an important task that helps to understand time series and can enable better forecasting. Nowadays, with high sampling rates leading to high-frequency data (such as daily, hourly, or minutely data), many real-world datasets contain time series data that can exhibit multiple seasonal patterns. Although several methods have been proposed to decompose time series better under these circumstances, they are often computationally inefficient or inaccurate. In this study, we propose Multiple Seasonal-Trend decomposition using Loess (MSTL), an extension to the traditional Seasonal-Trend decomposition using Loess (STL) procedure, allowing the decomposition of time series with multiple seasonal patterns. In our evaluation on synthetic and a perturbed real-world time series dataset, compared to other decomposition benchmarks, MSTL demonstrates competitive results with lower computational cost. The implementation of MSTL is available in the R package forecast. 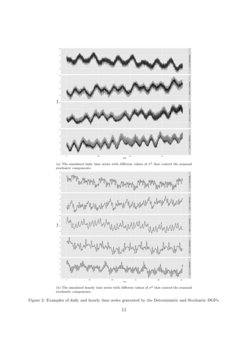 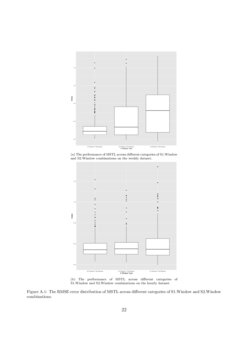 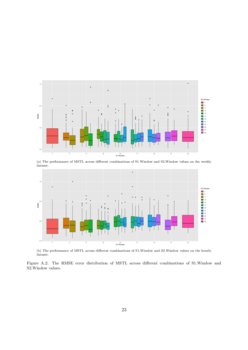 STR: A Seasonal-Trend Decomposition Procedure Based on Regression

You May Not Need Order in Time Series Forecasting

We present a neural network technique for the analysis and extrapolation...
Luke B. Godfrey, et al. ∙

In time series analysis and forecasting, it is often useful to identify the underlying patterns of time series data, to better understand the contributing phenomena and to enable better forecasting. Time series decomposition techniques have been introduced to decompose a time series into multiple components including trend, seasonality, and remainder. Such methods have important time series applications in seasonal adjustment procedures (Maravall, 2006; Thornton, 2013), forecasting (Koopman and Ooms, 2006; Hewamalage et al., 2021; Bandara et al., 2021a)

Nowadays, with rapid growth of availability of sensors and data storage capabilities, there is a significant increase of time series with higher sampling rates (sub-hourly, hourly, daily). Compared with traditional time series data, the higher-frequency time series data may exhibit more complex properties, such as multiple seasonal cycles, non-integer seasonality, etc. These time series are commonly found in the utility demand industry (electricity and water usage), mainly due to the intricate usage patterns of humans. For example, Figure  1 illustrates the aggregated half-hourly energy demand time series in the state of Victoria, Australia that has two seasonal periods, a daily seasonality (period =48) and a weekly seasonality (period =336). It can be seen that the average energy consumption in the weekdays is relatively higher to those in the weekends. Furthermore, a longer version of this time series may even show a yearly seasonality (period =17532

), with values systematically changing across the seasons such as summer and winter. In this scenario, daily and weekly consumption patterns are useful to estimate the short-term energy requirements; the yearly seasonal usage patterns are beneficial in long-term energy planning. Therefore, the accurate decomposition of time series with multiple seasonal cycles is useful to provide better grounds for decision-making in various circumstances.

MSTL is a robust, accurate seasonal-trend decomposition algorithm that is designed to capture multiple seasonal patterns in a time series. Most importantly, compared with other decomposition alternatives, MSTL is an extremely fast, computationally efficient algorithm, which is scalable to increasing volumes of time series data. In R, the proposed MSTL algorithm is implemented in the mstl function from the forecast package (Hyndman and Khandakar, 2008; Hyndman et al., 2021).

Here, ^St, ^Tt, ^Rt denote the seasonal, trend, and remainder components of the observation, respectively. MSTL extends Equation 1 to include multiple seasonal patterns in a time series as follows:

To summarize, a scheme of the MSTL procedure is given in Algorithm 1

s.window can be provided to control the variation of the seasonal components of each seasonal cycle. The outer-loop iterates the STL procedure multiple times to refine the extracted seasonal components. After executing the outer-loop, MSTL calculates the trend component of the time series using the final iteration of STL. In situations where a time series fails the seasonality test, MSTL applies the supsmu function to ascertain the trend of the time series. Finally, the remainder component is retrieved by deducting the trend component from the seasonally-adjusted time series. Also, since MSTL extends the STL algorithm, the other parameters of STL (e.g., t.window, l.window) are inherited by MSTL, and can be used for decomposition.

We evaluate the proposed MSTL decomposition algorithm on both simulated and a perturbed real-world time series dataset, where we know the true composition, i.e., trend, seasonality, and remainder, of time series.

We compare MSTL against a collection of current state-of-the-art techniques in decomposing time series with multiple seasonal cycles. This includes STR (Dokumentov and Hyndman, 2021) as a pure decomposition technique, TBATS (De Livera et al., 2011) and Prophet (Taylor and Letham, 2021) as forecasting techniques, where we use the decomposition of the time series.

The accuracy of the decomposition methods are evaluated using the root mean square error (RMSE). The RMSE is defined as follows:

In our experiments, the deterministic trend components Tdt are generated using a quadratic trend function with random coefficients, Tdt=N1(t+n/2(N2−1))2 where N1 and N2

Sdt are composed of five pairs of Fourier terms with random N(0,1) coefficients. Both Tdt and Sdt

are normalised to give mean zero and unit variance.

To generate stochastic trend components Tst, we use an ARIMA(0,2,0) model with standard normal errors. With respect to the stochastic seasonal components Sst, we introduce an additional error term N(0,σ2) to Sdt to change the coefficients for the Fourier terms from one seasonal cycle to another. Here, the stochastic strength of the seasonality is controlled by the σ2 parameter value. In other words, the σ2=0 scenario of Sst represents the Sdt.

Figure  2 illustrates the examples of simulated daily and hourly time series generated by the two DGPs. Here, we set the α=β=1 and γ=0.2 for both the DGPs. The lengths of the daily and hourly time series are equivalent to 1096 days and 505 days respectively (one observation more than three seasonal cycles of the highest available seasonality, i.e., 365 * 3 + 1 for the daily data and 168 * 3 + 1 for the hourly data).

Table 1 summarises the parameter sets (α, β, γ, σ2) used in our experiments. We create 150 time series for each DGP, generating 300 time series of daily and hourly data. As we know the true values of the seasonal, trend, and remainder components of the simulated time series, we calculate the root mean square error (RMSE) for each component by averaging across all datasets and dates. The presence of statistical significance of differences within multiple decomposition methods is assessed using a linear model applied to the squared errors.

Table 3 shows the results of all the decomposition techniques for the hourly simulated time series. For the deterministic and stochastic DGPs, we see that the proposed MSTL algorithm gives better RMSE on all components, compared to the PROPHET method. Also, for the (γ,σ2)={(0.6,0.075)} scenario on the Trend component, we that the MSTL achieves the best RMSE.

We also evaluate the performance of MSTL using real-world time series data. We use the moving block bootstrap (MBB) for real-world time series perturbing, following the procedure introduced in Bergmeir et al. (2016). Here, we first use MSTL to extract the seasonal, trend and remainder of components of a time series. Assuming these extracted components are the true decomposition of the time series, next we apply the MBB technique to the remainder component of the time series to generate multiple versions of the residual components. Finally, these bootstrapped residual components are added back together with the previously extracted seasonal and trend components to produce new perturbed versions of a time series, where we know the true composition of the series. In our experiments, we use the MBB implementation available through the MBB function from the forecast package Hyndman and Khandakar (2008); Hyndman et al. (2021).

We select the half-hourly electricity consumption in the state of Victoria, Australia, extracted from the vic_elec dataset (O’Hara-Wild et al., 2021) to generate multiple versions of the time series. As illustrated in Figure 1, this time series has two seasonal patterns, the daily pattern and the weekly seasonal pattern. In our experiments, we first aggregate the half-hourly data to hourly data, and select 149 days starting from 01 January 2012. Figure 3 shows the application of MSTL to the hourly electricity demand in Victoria (3601 hourly observations).

Table 4 summarises the overall performance of MSTL and the benchmarks on the perturbed electricity demand time series. According to Table 4, MSTL significantly outperforms STR, TBATS, and PROPHET in estimating all components. Furthermore, Table 5 provides a summary of the computational cost of MSTL and the benchmarks over the 100 bootstrapped time series. The experiments are run on an Intel(R) i7 processor (1.8 GHz), with 2 threads per core, 8 cores in total, and 16GB of main memory. As shown in Table 5, MSTL has the lowest execution time compared to other benchmarks, highlighting the scalability of MSTL to the increasing volumes of time series data. When used for sub-daily time series data, i.e, hourly, half-hourly, the computational efficiency of a decomposition method can be important as those time series are generally longer and contain a higher number of observations.

The MSTL algorithm is implemented in the mstl function in the forecast package (Hyndman et al., 2021), which is available on the Comprehensive R Archive Network (CRAN).

This research was supported by the Australian Research Council under grant DE190100045, and the Australian Centre of Excellence for Mathematical and Statistical Frontiers (Grant CE140100049).

To identify default parameter values for the s.window parameter, we extend this experiments to include more combinations of s.window values that satisfy the S1.Window < S2.Window premise. Figure 2 shows RMSE error distribution boxplots for the different combinations of S1.Window and S2.Window values on the weekly and hourly datasets. The S1.Window and S2.Window pairs are generated from S=(C+K∗i,C+K∗i+1), where C=(7,9,11,13,15) and K=(0,1,2,3,4,5,6,7). Here i represents the seasonal cycle number, i.e., for the first and second seasonality i=1 and i=2

respectively. Also, we select the smallest odd value from

S, when choosing a s.window value.

Overall, it can be seen that the S1.Window value of 11 and the S2.Window value of 15 gives the best median RMSE for weekly and hourly time series, which is the C=7 and K=4 instance of the above formula. Based on these results, we set the default s.window parameter of MSTL using the S=(C+K∗i,C+K∗i+1) formula, where C and K values are set to 7 and 4 respectively.

According to Figure 1, the s.window combinations that meet the S1.Window < S2.Window condition give the best median RMSE.