We study joint unicast and multigroup multicast transmission in single-cell massive multiple-input-multiple-output (MIMO) systems, under maximum ratio transmission. For the unicast transmission, the objective is to maximize the weighted sum spectral efficiency (SE) of the unicast user terminals (UTs) and for the multicast transmission the objective is to maximize the minimum SE of the multicast UTs. These two problems are coupled to each other in a conflicting manner, due to their shared power resource and interference. To address this, we formulate a multiobjective optimization problem (MOOP). We derive the Pareto boundary of the MOOP analytically and determine the values of the system parameters to achieve any desired Pareto optimal point. Moreover, we prove that the Pareto region is convex, hence the system should serve the unicast and multicast UTs at the same time-frequency resource. 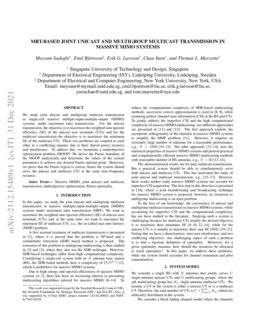 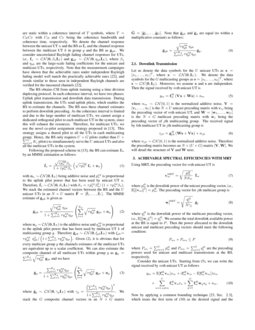 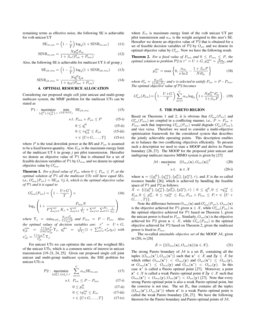 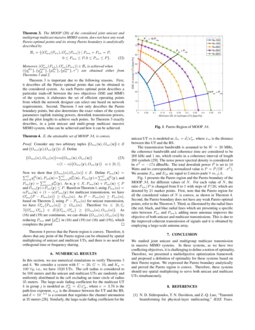 In this paper, we study the joint unicast and multigroup multicast transmission in massive multiple-input-multiple-output (MIMO) systems under maximum ratio transmission (MRT). We want to maximize the weighted sum spectral efficiency (SE) of unicast user terminals (UTs) and, at the same time, we want to maximize the minimum SE of multicast UTs, i.e., the so-called max-min fairness (MMF) problem.

A first seminal treatment of multicast transmission is presented in [1], where it is proved that the problem is NP-hard and a semidefinite relaxation (SDR) based method is proposed. The extension of this problem to multigroup multicasting is then studied in [2] and [3], where they also use the SDR technique. However, SDR-based techniques suffer from high computational complexity. Considering a single-cell system with an N antenna base station (BS), the SDR-based methods have a complexity of O(N6.5) [2], which is prohibitive for massive MIMO systems.

The aforementioned results are for pure multicast transmission. But a practical system should be able to simultaneously serve both unicast and multicast UTs. This has motivated the study of joint unicast and multicast transmission, e.g., [15, 16, 17]. However, these works neither study massive MIMO systems nor account for imperfect CSI acquisition. The first step in this direction is presented in [18], where a joint beamforming and broadcasting technique for massive MIMO system is proposed, however, its extension to multigroup multicasting is an open problem.

To the best of our knowledge, the coexistence of unicast and multigroup multicast transmission in massive MIMO systems, while accounting for imperfect CSI and the computational complexity, has not been studied in the literature. Studying such a system is challenging because for multicast UTs usually the desired objective is to maximize their minimum SE [8, 9, 10, 13, 12, 14], while for the unicast UTs it is usually to maximize their sum SE (SSE) [19, 20, 21]

. Noting that we have a shared power, inter-user interference, and two conflicting objectives, one challenging aspect of such a problem is to find a rigorous definition of optimality. Moreover, for a given optimality measure, how should the resources be allocated to reach optimality? In this paper, we address these problems, while our system model accounts for channel estimation and pilot contamination.

We consider a block fading channel model where the channels are static within a coherence interval of T symbols, where T=CBCT with CB and CT being the coherence bandwidth and coherence time, respectively. We denote the channel response between the unicast UT u and the BS as fu and the channel response between the multicast UT k in group g and the BS as ggk. We consider uncorrelated Rayleigh fading channel responses for UTs, i.e., fu∼CN(0,βuIN) and ggk∼CN(0,ηgkIN), where βu and ηgk are the large-scale fading coefficients for the unicast and multicast UTs, respectively. Note that the measurement campaigns have shown that the achievable rates under independent Rayleigh fading model well match the practically achievable rates [22], and trends similar to those seen in independent Rayleigh channels are verified for the measured channels [22].

The BS obtains CSI from uplink training using a time division duplexing protocol. In each coherence interval, we have two phases: Uplink pilot transmission and downlink data transmission. During uplink transmission, the UTs send uplink pilots, which enables the BS to estimate the channels. The BS uses these channel estimates to perform downlink precoding. As the coherence interval is limited and due to the large number of multicast UTs, we cannot assign a dedicated orthogonal pilot to each multicast UT in the system, since this will exhaust the resources. Therefore, for multicast UTs, we use the novel co-pilot assignment strategy proposed in [13]. This strategy assigns a shared pilot to all the UTs in each multicasting group. Hence, the BS only requires U+G pilots (rather than U+∑Gj=1Kj pilots) to simultaneously serve the U unicast UTs and also all the multicast UTs in the system.

Following the proposed scheme in [13], the BS can estimate fm by an MMSE estimation as follows:

with nu∼CN(0,IN) being additive noise and pupu is proportional to the uplink pilot power that has been used by unicast UT u. Therefore, ^fu∼CN(0,ϑuIN) with ϑu=τpupuβ2u/(1+τpupuβu)

. We stack the estimated channel vectors between the BS and the

where ng∼CN(0,IN) is the additive noise and qupgk is proportional to the uplink pilot power that has been used by multicast UT k of multicasting group g. Therefore ^ggk∼CN(0,ξgkIN) with ξgk=τqupgkη2gk/(1+∑Kgt=1τqupgtηgt). Given (2), it is obvious that for every multicast group g the channels estimates of the multicast UTs are equivalent up to a scalar coefficient. We can also estimate the composite channel of all multicast UTs within group g as gg=∑Kgt=1√τqupgtggt and we have

where ^gg∼CN(0,γgIN) with γg=(∑Kgt=1τqupgtηgt)21+∑Kgt=1τqupgtηgt. We stack the G composite channel vectors in an N×G matrix ^G=[^g1,…,^gG]. Note that ^ggk and ^gg are equal (to within a multiplicative constant) as follows:

where njk∼CN(0,1) is the normalized additive noise. Therefore the precoding matrix becomes an N×(U+G) matrix [V,W]. We will detail the structure of V and W next.

Using MRT, the precoding vector for mth unicast UT is

where Pun=∑Um=1pdlm and Pmu=∑Gj=1qdlj are the precoding powers used for unicast and multicast transmissions at the BS, respectively.

Consider the unicast UTs. Starting from (5), we can write the signal received by mth unicast UT as follows

Now by applying a common bounding technique [23, Sec. 2.3], which treats the first term of (3) as the desired signal and the remaining terms as effective noise, the following SE is achievable for mth unicast UT

Also, the following SE is achievable for multicast UT k of group j

Considering our proposed single cell joint unicast and multi-group multicast system, the MMF problem for the multicast UTs can be stated as

where P is the total downlink power at the BS and Pun is assumed to be a fixed known quantity. Also Ejk is the maximum energy limit of the multicast UT k in group j per pilot transmission. Hereafter we denote an objective value of P1 that is obtained for a set of feasible decision variables of P1 by Omu, and we denote its optimal objective value by O∗mu.

For a fixed value of Pun where 0≤Pun≤P, at the optimal solution of P1 all the multicast UTs will have equal SEs, i.e., O∗mu(Pun)=SEjk∀j,k, which is the optimal objective value of P1 and it is equal to

For unicast UTs we can optimize the sum of the weighted SEs of the unicast UTs, which is a common metric of interest in unicast transmission [19, 24, 20, 21, 25]. Given our proposed single cell joint unicast and multi-group multicast system, the SSE problem for unicast UTs is

where Em is maximum energy limit of the mth unicast UT per pilot transmission and αm is the weight assigned to this user’s SE. Hereafter we denote an objective value of P2 that is obtained for a set of feasible decision variables of P2 by Oun and we denote its optimal objective value by O∗un. Now we have the following result.

For a fixed value of Pmu and 0≤Pmu≤P, the optimal solution to problem P2 is τ∗=U+G, pup∗m=EmU+G, and

where ϑ∗m=Emβ2m1+Emβm and ν is selected to satisfy Pun=P−Pmu. The optimal objective value of P2 becomes

Based on Theorems 1 and 2, it is obvious that O∗mu(Pun) and O∗un(Pmu) are coupled in a conflicting manner, i.e., P=Pun+Pmu, such that improving O∗mu(Pun) would degrade O∗un(Pmu), and vice versa. Therefore we need to consider a multi-objective optimization framework for the considered system that describes the jointly achievable operating points. This description enables us to balance the two conflicting objectives efficiently. To present such a description we need to state a MOOP and derive its Pareto boundary [26, 27]. The MOOP for the proposed joint unicast and multigroup multicast massive MIMO system is given by [27]

The MOOP (20) of the considered joint unicast and multigroup multicast massive MIMO system, does not have any weak Pareto optimal points and its strong Pareto boundary is analytically described by

Moreover, (O∗mu(Pun),O∗un(Pmu))∈Bs is achieved when ({qdl∗j},{qup∗jk},{pdl∗m},{pup∗m},τ∗) are obtained either from Theorems 1 and 2.

Theorem 3 is important due to the following reasons. First, it describes all the Pareto optimal points that can be obtained in the considered system. As each Pareto optimal point describes a particular trade-off between the two objectives (SSE and MMF) of the system, it elaborates the set of efficient operating points from which the network designer can select one based on network requirements. Second, Theorem 3 not only describes the Pareto boundary points, but also determines the exact values of the system parameters (uplink training powers, downlink transmission powers, and the pilot length) to achieve such points. So Theorem 3 exactly describes, in a joint unicast and multi-group multicast massive MIMO system, what can be achieved and how it can be achieved.

S, the attainable set of MOOP M, is convex.

Theorem 4 proves that the Pareto region is convex. Therefore, it shows that any point of the Pareto region can be obtained by spatial multiplexing of unicast and multicast UTs, and there is no need for orthogonal time or frequency sharing.

35 meters. The large-scale fading coefficient for the multicast UT k in group j is modeled as βmjk=¯d/xνjk, where ν=3.76 is the path-loss exponent, xjk is the distance between the UT and the BS, and ¯d=10−3.5 is a constant that regulates the channel attenuation at 35 meters [28]. Similarly, the large-scale fading coefficient for the unicast UT m is modeled as βm=¯d/xνm, where xm is the distance between this UT and the BS.

The transmission bandwidth is assumed to be W=20 MHz, the coherence bandwidth and coherence time are considered to be 200 kHz and 1 ms, which results in a coherence interval of length 200 symbols [29]. The noise power spectral density is considered to be σ2=−174 dBm/Hz. The total downlink power ¯P is set to 10 Watts and its corresponding normalized value is P=¯P/(W⋅σ2). We assume Em and Ejk are equal to 2 micro-joule ∀m,j,k.

Fig. 1 presents the Pareto region and the Pareto boundary of the MOOP M, for different values of N. For each value of N, the ratio Pun/P is changed from 0 to 1 with steps of P/20, which are denoted by 21 marker points. First, note that the Pareto region for all the considered values of N is convex, as shown in Theorem 4. Second, the Pareto boundary does not have any weak Pareto optimal points, refer to the Theorem 3. Third, as illustrated by the radial lines (the red, black, and blue radial lines which are presenting a specific ratio between Pun and Pmu), adding more antennas improves the objective of both unicast and multicast transmissions. This is due to the improved coherent transmission of signals and it is obtained by employing a large-scale antenna array.

We studied joint unicast and multigroup multicast transmission in massive MIMO systems. In these systems, as we have two conflicting objectives, it is challenging to define a notion of optimality. Therefore, we presented a multiobjective optimization framework and proposed a definition of optimality for these systems based on their Pareto region. We expressed the Pareto boundary analytically and proved the Pareto region is convex. Therefore, these systems should use spatial multiplexing to serve both unicast and multicast UTs simultaneously.