MultiPath TCP (MPTCP) is a promising protocol which brings new light to the TCP/IP protocol stack ossification problem by means of an impactful innovation of the transport layer. A MPTCP connection consists of a set of one or more subflows, where each subflow offers an alternative path to reach a target remote end-system. However, simply applying the standard TCP congestion control on each subflow would give an unfair resource sharing. Various subflows of a connection would dispute bottleneck links with regular single-path TCP connections, leading them to starvation conditions. To deal with this concern, a multipath congestion control algorithm adjusts the sending operation of all subflows in a coupled fashion in order to achieve various objectives, e.g., friendliness, responsiveness, throughput improvement, and congestion balance. In this report, we describe the four coupled congestion control algorithms deployed in the MPTCP Linux kernel implementation, namely: LIA, OLIA, BALIA, and wVegas. We provide a concise material with technical details of each algorithm, while summarizing all of them together from a single notation. 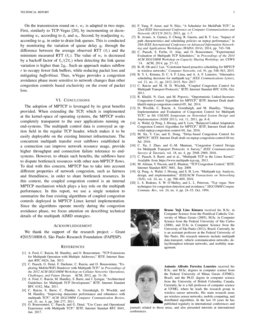 . Each subflow provides an alternative path to reach a remote end-system. A subflow starts and terminates as a regular single-path TCP (SPTCP) connection, with its own congestion window, which measures and estimates its state variables, such as RTT. MPTCP packet fields are carried as option into TCP header. Thus, subflow packets are handled as regular TCP packets in the network, which avoids misinterpret and drop of MPTCP packets by middleboxes. This makes easy the deployment of MPTCP on the existing Internet.

Network paths between multihomed relay/end systems have different characteristics (delay, loss, and capacity), in which MPTCP has to deal with. The reality is that there is a diversity of data traffic and transmission technology in the access networks, i.e., there are several different (heterogeneous) network paths on the Internet. Thus, it is a challenge to improve the performance of multipath transfers to allow a higher bandwidth aggregation benefit. While different algorithms have been proposed to improve multipath performance in different network scenarios and applications in the last years, the research effort has been centered around solutions in the scopes of packet scheduling [Yang.et.al:2013, Arzani.et.al:2014, Paasch.et.al:2014, Oh.and.Lee:2015, Kimura.et.al:2017], and coupled congestion controls [lia:2011, olia:2014, Wischik.et.al:2011, balia:2016, wVegas:2014].

In this report, we focus on coupled congestion controls and provide a summay of the existing algorithms deployed in the MPTCP Linux kernel implementation. Simply using standard TCP congestion control on each subflow r would give an unfair resource sharing, since the subflows in an R connection would dispute bottleneck links with regular SPTCP connections leading them to starvation [lia:2011]. In addition, the multipath connection undergoes the bottleneck conditions of similar and dissimilar path characteristics. To deal with those concerns, a MPTCP congestion control has to couple and adjust the sending operation of all r∈R subflows. In doing so, various objectives are taking into account [Xu.et.al:2016]: