Motion Segmentation by SCC on the Hopkins 155 Database

We apply the Spectral Curvature Clustering (SCC) algorithm to a benchmark database of 155 motion sequences, and show that it outperforms all other state-of-the-art methods. The average misclassification rate by SCC is 1.41 for sequences having two motions and 4.85 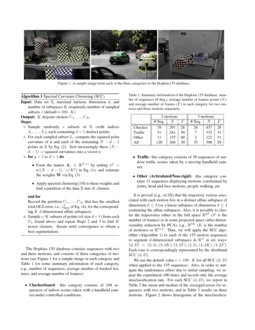 In this paper, we present the mechanics and algorithms to compute the se...
Nikhil Chavan Dafle, et al. ∙

is a very important yet challenging problem in computer vision. Given multiple image frames of a dynamic scene taken by a (possibly moving) camera, the task is to segment the point correspondences in those views into different motions undertaken by the moving objects. A more formal definition of the problem appears below.

Consider a dynamic scene consisting of K rigid-body motions undertaken by K objects relative to a moving camera. Suppose that F frames of images have been taken by the camera, and that N feature points y1,…,yN∈R3 are detected on the objects. Let zij∈R2 be the coordinates of the feature point yj in the ith image frame for every 1≤i≤F and 1≤j≤N, and form N

zj=[z′1jz′2j…z′Fj]′∈R2F. The task is to separate these trajectories z1,…,zN into independent motions undertaken by those objects.

There has been significant research on this subject over the past few years (see [19, 16] for a comprehensive literature review). According to the assumption on the camera model, those algorithms can be divided into the following two categories:

. It contains 155 video sequences along with features extracted and tracked in all frames for each sequence, 120 of which have two motions and the rest (35 sequences) consist of three motions.

In this paper we examine the performance of a recent affine method, Spectral Curvature Clustering (SCC) [3, 2], on the Hopkins 155 database and compare it with other affine algorithms that are mentioned above (their results have been reported in [16, 11] and also partly online at http://www.vision.jhu.edu/data/hopkins155/).

Our experiments show that SCC outperforms all the above-mentioned affine algorithms on this benchmark dataset with an average classification error of 1.41% for two motions and 4.85% for three motions. In contrast, the smallest average misclassification rate among all other affine methods is 2.40% for sequences containing two motions and 6.26% for sequences with three motions, both achieved by ALC [11].

2 Review of the SCC algorithm

The SCC algorithm [3, Algorithm 2] takes as input a data set X={x1,…,xN}, which is sampled from a mixture of affine subspaces in the Euclidean space RD

and possibly corrupted with noise and outliers. The number of the subspaces

K and the maximum111By using only the maximal dimension we treat all the subspaces to be d-dimensional. This strategy works quite well in many cases, as demonstrated in [3]. of their dimensions d should also be provided by the user. The output of the algorithm is a partition of the data into K (disjoint) clusters, X=⋃1≤k≤KCk, representing the affine subspaces.

The initial step of the SCC algorithm is to randomly select from the data c subsets of (distinct) points with a fixed size d+1. Based on these c (d+1)

in which σ>0 is a fixed constant whose automatic choice is explained later, and c2p(I) is the (squared) polar curvature [3] of the corresponding d+2 points, xI:=[⋯xi⋯]i∈I. That is,

Note that the numerator det(x′I⋅xI+1) is, up to a factor, the (squared) volume of the (d+1)-simplex formed by the d+2 points xI. Therefore, the polar curvature can be thought of as being the volume of the simplex, normalized at each vertex, averaged over the vertices, and then scaled by the diameter of the simplex. When d+2 points are sampled from the same subspace, we expect the polar curvature to be close to zero and consequently the affinity close to one. On the other hand, when they are sampled from mixed subspaces, the polar curvature is expected to be large and the affinity close to zero.

The SCC algorithm next forms pairwise weights W from the above multi-way affinities:

In order to refine the clusters, SCC then re-samples c/K (d+1)-tuples from each of the clusters Ck,1≤k≤K, and re-applies the rest of the steps. This procedure is repeated until convergence for a best segmentation, and is referred to as iterative sampling (see [3, Sect. 3.1.1]). Its convergence is measured by the total orthogonal least squares (OLS) error of d-dimensional affine subspace approximations F1,…,FK to the clusters C1,…,CK:

In situations where the ground truth labels of the data points are known, we also compute the misclassification rate:

The parameter σ of Eq. (1) is automatically selected by SCC at each iteration in the following way. Let c denote the vector of all the (N−d−1)⋅c squared polar curvatures computed in an arbitrarily fixed iteration. The algorithm applies the following set of candidate values which represent several scales of the curvatures:

and chooses the one for which the error of Eq. (4) is minimized. A quantitative derivation of the above selection criterion for σ appears in [3, Section 3.1.2]. It is also demonstrated in [3] that SCC will often fail with arbitrary choices of σ.

We present (a simplified version of) the SCC algorithm below (in Algorithm 1). We note that the storage requirement of the algorithm is O(N⋅(D+c)), and the total running time is O(ns⋅(d+1)2⋅D⋅N⋅c), where ns is the number of sampling iterations performed (till convergence, typically O(d)).

We compare the SCC algorithm with other state-of-the-art affine methods, such as ALC [8, 11], GPCA [17, 9, 19], LSA [20], MSL [14], and RANSAC [5, 15], using the Hopkins 155 benchmark [16]. We also compare the performance of affine methods with an oracle, the Reference algorithm (REF) [16], which fits subspaces using the ground truth clusters and re-assigns points to its nearest subspace. Though it cannot be used in practice, REF verifies the validity of affine camera model and provides a basis for comparison among practical algorithms. The results of the latter six methods (including REF) are already published in [19, 11], so we simply copy them from there.

It is proved (e.g., in [9]) that the trajectory vectors associated with each motion live in a distinct affine subspace of dimension d≤3 (or a linear subspace of dimension d≤4 containing the affine subspace). Also, it is possible to cluster the trajectories either in the full space R2F (F is the number of frames) or in some projected space (after dimensionality reduction by PCA), e.g., R4K (K is the number of motions) or Rd+1. Thus, we will apply the SCC algorithm (Algorithm 1) to each of the 155 motion sequences to segment d-dimensional subspaces in RD in six ways: (d,D)=(3,4),(3,4K),(3,2F),(4,5),(4,4K),(4,2F). Each case is correspondingly represented by the shorthand SCC (d,D).

We use the default value c=100⋅K for all SCC (d,D) when applied to the 155 sequences. Also, in order to mitigate the randomness effect due to initial sampling, we repeat the experiment 100 times and record only the average misclassification rate. For each SCC (d,D), we report in Table 2 the mean and median of the averaged errors for sequences with two motions, and in Table 3 results on three motions. Figure 2 shows histograms of the misclassification rates with the percentage of sequences in which each algorithm achieved a certain error. The corresponding histograms for other methods are shown in [19, Figure 3].

Looking at Tables 2 and 3, we conclude that the SCC algorithm (with all six pairs (d,D)) outperforms all competing methods (in terms of the mean error) and is very close to the reference algorithm (REF). In the checkerboard category, it even has a better performance than REF. In addition, SCC has the following two strengths in comparison with most other affine methods. First, as we observed in experiments, the performance of SCC is not so sensitive to its free parameter c. In contrast, the ALC algorithm is very sensitive to its distortion parameter ε and often gives incorrect number of clusters, requiring running it for many choices of ε while having no theoretical guarantee. Second, SCC can be directly applied to the original trajectory vectors (which are very high dimensional), thus preprocessing of the trajectories, i.e., dimensionality reduction, is not necessary (unlike GPCA and LSA). Finally, we remark that SCC also outperforms some perspective methods, e.g., Local Linear Manifold Clustering (LLMC) [6] (their misclassification rates are also available at http://www.vision.jhu.edu/data/hopkins155/).

The histograms (in Figure 2) show that the SCC algorithm obtains a perfect segmentation for 80% of two-motion sequences and for over 50% of three-motion sequences. Under this criterion, SCC is at least comparable to the best algorithms (ALC, LSA 4K, MSL) and the reference algorithm (REF); see [11, Figure 4] and [19, Figure 3]. Moveover, SCC has the shortest tails; its worst case segmentation error (about 35%) is much smaller than those of other methods some of which are as large as 50%.

Regarding running time, the SCC algorithm generally takes 1 to 2 seconds to process one sequence on a compute server with two dual core AMD Opteron 64-bit 280 processors (2.4 GHz) and 8 GB of RAM. It is much faster than the best competitors such as ALC, LSA 4K, and MSL (see their computation time in [11, Table 6] and [16, Tables 3 & 5] while also noting that there were all performed on faster machines).

At the time of finalizing this version we have found out about the very recent affine method of Sparse Subspace Clustering (SSC) [4] which reportedly has superb results on the Hopkins 155 database and outperforms the results reported here for both SCC and REF. It will be interesting to test its sensitivity to its tuning parameter λ in future work.

We thank the anonymous reviewers for their helpful comments and for pointing out reference [4] to us. Special thanks go to Rene Vidal for encouraging comments when this manuscript was still at an early stage and for referring us to the workshop. Thanks to the Institute for Mathematics and its Applications (IMA), in particular Doug Arnold and Fadil Santosa, for an effective hot-topics workshop on multi-manifold modeling that we participated in. The research described in this paper was partially supported by NSF grants #0612608 and #0915064.