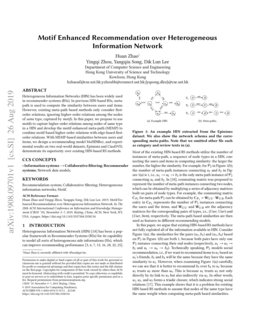 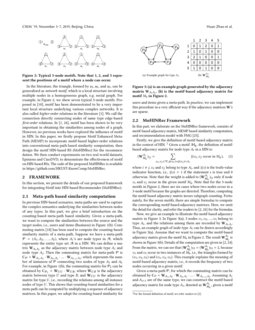 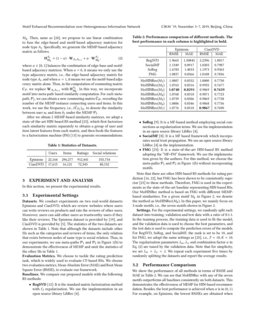 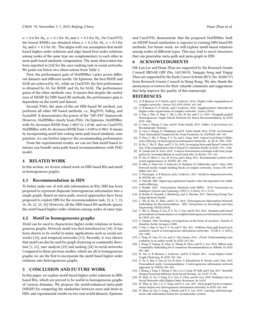 In this paper, we argue that existing HIN-based RS methods have not fully exploited all of the information available in HIN. Consider Figure 1(a), the similarities for the pairs (u1,b3) and (u1,b4) based on P2 in Figure 1(b) are both 1, because both pairs have only one P2 instance connecting their end nodes (respectively, u1→u3→b2 and u1→u4→b4). Technically speaking, P2 models social recommendation, i.e., if we want to recommend items to u1 based on u1’s friends, b3 and b4 will be the same because they have the same similarity to u1. However, when examining Figure 1(a) carefully, we can see that it is better to recommend b3 over b4 to u1 because u1 trusts u3 more than u4. This is because u1 trusts u3 not only directly by its link to u3 but also indirectly via u2. In other words, u1, u2, and u3 forms a triadic closure, which indicates strong social relations (Simmel, 1908). This example shows that it is a problem for existing HIN-based RS methods to assume that nodes of the same type have the same weight when computing meta-path based similarities.

In the literature, the triangle, formed by u1,u2, and u3, can be generalized as network motif, which is a local structure involving multiple nodes in a homogeneous graph, e.g. social graph. For example, in Figure 2, we show seven typical 3-node motifs. Proposed in (Milo et al., 2002), motif has been demonstrated to be a very important local structure underlying various complex networks. It is also called higher-order relations in the literature (Benson et al., 2016a). We call the connection directly connecting nodes of same type edge-based first-order relations. In (Benson et al., 2016a; Zhao et al., 2018a), motif has been shown to be very important in obtaining the similarities among nodes of a graph. However, no previous works have explored the influence of motif in HIN. In this paper, we firstly propose Motif Enhanced Meta-Path (MEMP) to incorporate motif-based higher-order relations into conventional meta-path based similarity computation, then design the motif HIN-based RS (MoHINRec) for the recommendation. We then conduct experiments on two real-world datasets, Epinions and CiaoDVD, to demonstrate the effectiveness of motif on HIN-based RSs. The code of the proposed MoHINRec is available in https://github.com/HKUST-KnowComp/MoHINRec.

In this section, we present the details of our proposed framework for integrating Motif into HIN-based Recommender (MoHINRec).

In previous HIN-based scenarios, meta-paths are used to capture the complex semantics underlying the similarities between nodes of any types. In this part, we give a brief introduction on the counting-based meta-path based similarity. Given a meta-path, we want to compute the similarities between the source and the target nodes, i.e., users and items (Business) in Figure 1(b). Commuting matrix (Sun et al., 2011) has been used to compute the counting-based similarity matrix of a meta-path. Suppose we have a meta-path P=(A1,A2,…,Al), where Ai’s are node types in A, which represents the entity type set A in a HIN. We can define a matrix WAiAj as the adjacency matrix between node type Ai and node type Aj. Then the commuting matrix for meta-path P is CP=WA1,A2⋅WA2,A3⋅...⋅WAl−1,Al, which represents the number of instances of P connecting two nodes of type A1 and Al. For example, in Figure 1(b), the commuting matrix for P2 can be obtained by CP2=WUU⋅WUB, where WUB is the adjacency matrix between type U and type B, and WUU is the adjacency matrix for type U, i.e., recording the relations among all instance nodes of type U. This shows that counting-based similarities for a meta-path can be computed by multiplying a sequence of adjacency matrices. In this paper, we adopt the counting-based similarity for users and items given a meta-path. In practice, we can implement this procedure in a very efficient way if the adjacency matrices W’s are sparse.

In this part, we elaborate on the MoHINRec framework, consists of motif-based adjacency matrix, MEMP based similarity computation, and recommendation model with FMG (Zhao et al., 2017).

where i≠j, vi and vj belong to type Ai, and \b1(s) is the truth-value indicator function, i.e., \b1(s)=1 if the statement s is true and 0 otherwise. Note that the weight is added to (WAiMk)ij only if node vi and vj occur in the given motif Mk. Note that for the 3-node motifs in Figure 2, there are six cases where two nodes occur in a 3-node motif because the graphs are directed. Therefore, computing the motif-based adjacency matrix incurs subgraph counting. Fortunately, for the seven motifs, there are simple formulas to compute the corresponding motif-based adjacency matrices. Here, we omit the detail for clarity, and refer the readers to (Benson et al., 2016b; Zhao et al., 2018a) for the formulas.

After we obtain L MEMP-based similarity matrices, we adopt a state-of-the-art HIN-based RS method (Zhao et al., 2017), which first factorizes each similarity matrix separately to obtains a group of user and item latent features from each matrix, and then feeds the features to a factorization machine (FM) (Rendle, 2012) to generate recommendations.

In this section, we present the experimental results.

Datasets. We conduct experiments on two real-world datasets: Epinions and CiaoDVD, which are review websites where users can write reviews on products and rate the reviews of other users. Moreover, users can add other users as trustworthy users if they like their reviews. The Epinions dataset is provided by (Tang et al., 2012), and CiaoDVD is provided by (Guo et al., 2014). The statistics of the two datasets are shown in Table 1. Note that although the datasets include other SIs such as the categories and reviews of items, the only relation that exists between nodes of same type is social relation. Thus, in our experiments, we use meta-paths P1 and P2 in Figure 1(b) to demonstrate the effectiveness of MEMP and omit the statistics of the other SIs in Table 1.

Baselines. We compare our proposed models with the following RS methods:

Note that there are other HIN-based RS methods for rating prediction (Yu et al., 2014; Shi et al., 2015), but FMG has been shown to be consistently superior (Zhao et al., 2017) to these methods. Therefore, FMG is used in the experiments as the state-of-the-art baseline representing HIN-based RSs. Our MoHINRec method is based on FMG with different MEMP-based similarities. For a given motif Mk in Figure 2, we denote the method as MoHINRec(Mk). In this paper, we mainly focus on 3-node motifs, i.e., the seven motifs shown in Figure 2.

Settings. For the experimental settings, we randomly split each dataset into training, validation and test data with a ratio of 8:1:1. In the training process, the training data is used to fit the model, and the validation data is used to choose the best parameters, and the test data is used to compute the prediction errors of the models. For RegSVD, SoReg, and SocialMF, the rank is set to be 10, and for FMG, we adopt the same settings as (Zhao et al., 2017), i.e., F=10,K=10. The regularization parameters λw,λv and combination factor α in Eq. (2) are tuned by the validation data. Note that for simplicity, we set λw=λv=λ. We repeat each experiment five times by randomly splitting the datasets and report the average results.

Second, FMG, the state-of-the-art HIN-based RS method, outperforms all other MF-based methods, i.e., RegSVD, SoReg, and SocialMF. It demonstrates the power of the “MF+FM” framework. However, MoHINRec clearly beats FMG. On Epinions, MoHINRec with M3 decreases RMSE from 1.0857 to 1.0740, and on CiaoDVD, MoHINRec with M7 decreases RMSE from 1.0108 to 0.9867. It means by incorporating motif into exiting meta-path based similarity computation, we can further improve the recommending performance.

From the experimental results, we can see that motif-based relations can benefit meta-path based recommendation with FMG model.

In this section, we review related work on HIN-based RSs and motif in homogeneous graphs.

In this paper, we explore motif-based higher-order relations in HIN-based RSs, which are proved to be useful in homogeneous graphs of various domains. We propose the motif-enhanced meta-path (MEMP) for computing the similarities between users and items in HIN, and experimental results on two real-world datasets, Epinions and CiaoDVD, demonstrate that the proposed MoHINRec built on MEMP-based similarities is superior to existing HIN-based RS methods. For future work, we will explore motif-based relations among nodes of different types. This may lead to novel structures that can generalize meta-path and meta-graph in HIN.

Dik Lun Lee and Huan Zhao are supported by the Research Grants Council HKSAR GRF (No. 16215019). Yangqiu Song and Yingqi Zhou are supported by the Early Career Scheme (ECS, No. 26206717) from Research Grants Council in Hong Kong. We also thank the anonymous reviewers for their valuable comments and suggestions that help improve the quality of this manuscript.