This paper considers optimal control of fractional parabolic PDEs with both state and control constraints. The key challenge is how to handle the state constraints. Similarly, to the elliptic case, in this paper, we establish several new mathematical tools in the parabolic setting that are of wider interest. For example, existence of solution to the fractional parabolic equation with measure data on the right-hand-side. We employ the Moreau-Yosida regularization to handle the state constraints. We establish convergence, with rate, of the regularized optimal control problem to the original one. Numerical experiments confirm what we have proven theoretically. 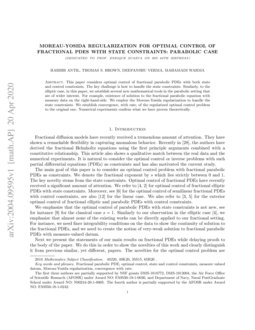 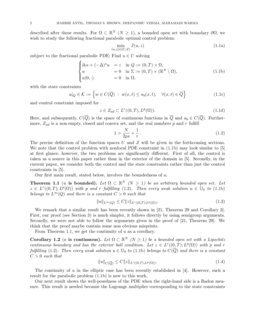 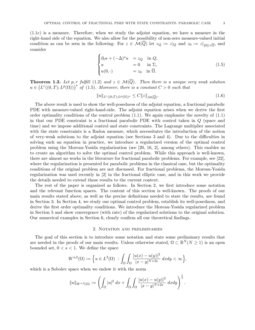 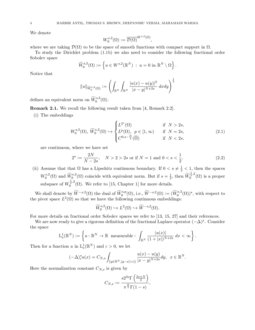 Fractional diffusion models have recently received a tremendous amount of attention. They have shown a remarkable flexibility in capturing anomalous behavior. Recently in [28]

, the authors have derived the fractional Helmholtz equations using the first principle arguments combined with a constitutive relationship. This article also shows a qualitative match between the real data and the numerical experiments. It is natural to consider the optimal control or inverse problems with such partial differential equations (PDEs) as constraints and has also motivated the current study.

We emphasize that the optimal control of parabolic PDEs with state constraints is not new, see for instance [9] for the classical case s=1. Similarly to our observation in the elliptic case [4], we emphasize that almost none of the existing works can be directly applied to our fractional setting. For instance, we need finer integrability conditions on the data to show the continuity of solution to the fractional PDEs, and we need to create the notion of very-weak solution to fractional parabolic PDEs with measure-valued datum.

Next we present the statements of our main results on fractional PDEs while delaying proofs to the body of the paper. We do this in order to show the novelties of this work and clearly distinguish it from previous similar, yet different, papers. The novelties for the optimal control problem are described after these results. For Ω⊂RN (N≥1), a bounded open set with boundary ∂Ω, we wish to study the following fractional parabolic optimal control problem:

Here, and subsequently, C(¯¯¯¯Q) is the space of continuous functions in ¯¯¯¯Q and ub∈C(¯¯¯¯Q). Furthermore, Zad is a non-empty, closed and convex set, and the real numbers p and r fulfill

The precise definition of the function spaces U and Z will be given in the forthcoming sections. We note that the control problem with nonlocal PDE constraint in (1.1b) may look similar to [5] at first glance, however, the two problems are significantly different. First of all, the control is taken as a source in this paper rather than in the exterior of the domain in [5]. Secondly, in the current paper, we consider both the control and the state constraints rather than just the control constraints in [5].

Our first main result, stated below, involves the boundedness of u.

We remark that a similar result has been recently shown in [21, Theorem 29 and Corollary 3]. First, our proof (see Section 3) is much simpler, it follows directly by using semigroup arguments. Secondly, we were not able to follow the arguments given in the proof of [21, Theorem 29]. We think that the proof maybe contain some non obvious misprints.

From Theorem 1.1, we get the continuity of u as a corollary.

The continuity of u in the elliptic case has been recently established in [4]. However, such a result for the parabolic problem (1.1b) is new to this work.

Our next result shows the well-posedness of the PDE when the right-hand side is a Radon measure. This result is needed because the Lagrange multiplier corresponding to the state constraints (1.1c) is a measure. Therefore, when we study the adjoint equation, we have a measure in the right-hand side of the equation. We also allow for the possibility of non-zero measure-valued initial condition as can be seen in the following: For z∈M(¯¯¯¯Q) let zQ:=z|Q and z0:=z|{0}×¯¯¯Ω, and consider

The above result is used to show the well-posedness of the adjoint equation, a fractional parabolic PDE with measure-valued right-hand-side. The adjoint equation arises when we derive the first order optimality conditions of the control problem (1.1). We again emphasize the novelty of (1.1) in that our PDE constraint is a fractional parabolic PDE with control taken in Q (space and time) and we impose additional control and state constraints. The Lagrange multiplier associated with the state constraints is a Radon measure, which necessitates the introduction of the notion of very-weak solutions to the adjoint equation (see Sections 3 and 4). Due to the difficulties in solving such an equation in practice, we introduce a regularized version of the optimal control problem using the Moreau-Yosida regularization (see [20, 16, 2], among others). This enables us to create an algorithm to solve the optimal control problem. While this approach is well-known, there are almost no works in the literature for fractional parabolic problems. For example, see [22], where the regularization is presented for parabolic problems in the classical case, but the optimality conditions of the original problem are not discussed. For fractional problems, the Moreau-Yosida regularization was used recently in [2] in the fractional elliptic case, and in this work we provide the details needed to extend those results to the current context.

The rest of the paper is organized as follows. In Section 2, we first introduce some notation and the relevant function spaces. The content of this section is well-known. The proofs of our main results stated above, as well as the precise definitions needed to state the results, are found in Section 3. In Section 4, we study our optimal control problem, establish its well-posedness, and derive the first order optimality conditions. We introduce the Moreau-Yosida regularized problem in Section 5 and show convergence (with rate) of the regularized solutions to the original solution. Our numerical examples in Section 6, clearly confirm all our theoretical findings.

The goal of this section is to introduce some notation and state some preliminary results that are needed in the proofs of our main results. Unless otherwise stated, Ω⊂RN(N≥1) is an open bounded set, 0<s<1. We define the space

where we are taking D(Ω) to be the space of smooth functions with compact support in Ω.

To study the Dirichlet problem (1.1b) we also need to consider the following fractional order Sobolev space

defines an equivalent norm on ˜Ws,20(Ω).

We recall the following result taken from [4, Remark 2.2].

For more details on fractional order Sobolev spaces we refer to [13, 15, 27] and their references.

We are now ready to give a rigorous definition of the fractional Laplace operator (−Δ)s. Consider the space

Here the normalization constant CN,s is given by

provided that the limit exists for a.e. x∈RN.

Next we define the operator (−Δ)sD in L2(Ω) as follows:

Notice that (−Δ)sD is the realization of the fractional Laplace operator (−Δ)s in L2(Ω) with the zero Dirichlet exterior condition u=0 in RN∖Ω. The next result is well-known (see e.g. [7, 10, 25]).

We refer to [10] for further qualitative properties of the semigroup (e−t(−Δ)sD)t≥0. We conclude this section with the following observation.

3. State equation and an equation with measure valued datum

For the remainder of this section, unless otherwise stated, we assume that Ω⊂RN (N≥1) is a bounded open set. For each result we shall clarify if a regularity on Ω is needed. Moreover, given a Banach space X and its dual X⋆, we shall denote by ⟨⋅,⋅⟩X⋆,X their duality pairing.

In addition, we have the following norm on this space:

Towards this end, we notice that (1.1b) can be rewritten as the following Cauchy problem:

Next we state the notion of weak solution to (3.1).

where (e−t(−Δ)sD)t≥0 is the semigroup mentioned in Remark 2.3. In addition there is a constant C>0 such that

We are now ready to prove Theorem 1.1.

Firstly, if 1≤p<N2s, then the result is a direct consequence of the semigroup property, the representation (3.3) of solutions and the Sobolev embedding (2.1). Thus, we can assume without any restriction that p≥N2s. We give the proof for p>N2s. The case p=N2s follows similarly as the case p>N2s.

we have the estimate:

denotes the first eigenvalue of the operator

Using Young’s convolution inequality, we get from (3.6) that

Under the assumption that Ω has the exterior cone condition, we obtain Corollary 1.2 as a direct consequence of Theorem 1.1.

We prove the result in two steps.

The existence and uniqueness of weak solutions to the Dirichlet problem (3.8) are a direct consequence of the classical Lax-Milgram theorem.

From the above properties of the resolvent operator and the semigroup, together with the fact that D((−Δ)sD,c) is dense in C0(Ω), we can deduce that the operator −(−Δ)sD,c generates a strongly continuous semigroup (e−t(−Δ)sD,c)t≥0 on C0(Ω). Thus, for every f∈C0(Ω) we have that the function

Now, throughout the rest of the paper, without any mention, we assume that Ω⊂RN (N≥1) is a bounded open set with a Lipschitz continuous boundary and has the exterior ball condition.

Next we study the well-posedness of the state equation (1.1b) where z is a Radon measure and the initial condition u(0,⋅) is equal to a Radon measure. However, prior to this result, we need to introduce the notion of such solutions. We call them very-weak solutions. We refer to [4] for a similar notion for the fractional elliptic problems and [3, 5] for fractional elliptic and parabolic problems with nonzero exterior conditions. To motivate the need to discuss such solutions, we introduce the adjoint equation, which we will derive in the next section when discussing the first-order optimality conditions. For μ∈M(¯¯¯¯Q), we can write μ=μQ+μΣ+μT+μ0, where μQ=μ|Q, μΣ=μ|Σ, μT=μ|{T}×¯¯¯Ω and μ0=μ|{0}×¯¯¯Ω. We then consider the following problem with μ0=0 and μΣ=0

This problem now resembles (1.5), and so we define the notion of very-weak solution in this context.

Now, we are ready to prove the existence and uniqueness of very-weak solutions as stated in Theorem 1.3.

We prove the theorem in three steps.

Step 2: Towards this end, we define the map

Due to Corollary 1.2, Ξ is linear and continuous.

that is, u is a solution of (1.1b) according to Definition 3.3 and we have shown the existence.

Next, we prove the uniqueness. Assume that (1.1b) has two very weak solutions u1 and u2 with the same right hand side datum z. Then it follows from (3.12) that

for every w∈Lr((0,T);Lp(Ω)). Exploiting the fundamental lemma of the calculus of variations we can conclude from the preceding identity that u1−u2=0 a.e. in Ω and we have shown the uniqueness.

where in the last step we have used Corollary 1.2. Finally dividing both sides of the estimate (3.14) by ∥ζ∥Lr((0,T);Lp(Ω)) and taking the supremum over all functions ζ∈Lr((0,T);Lp(Ω)) we obtain the desired result. The proof is complete. ∎

The main goal of this section is to establish well-posdeness of the optimal control problem (1.1) and to derive the first order necessary optimality conditions. We start by equivalently rewriting the optimal control problem (1.1) in terms of the constraints (3.1). Recall that (−Δ)sD is the realization of (−Δ)s in L2(Ω) with zero Dirichlet exterior conditions and it is a self-adjoint operator. In terms of (−Δ)sD, (1.1) becomes

We next define the appropriate function spaces. Let

Here, U is a Banach space with the graph norm

We let Zad⊂Z to be a nonempty, closed, and convex set and K as in (1.1c). We require the spaces U and Z to be reflexive. This is needed to show the existence of solution to (???).

Next using Corollary 1.2 we have that for every z∈Z there is a unique u∈U that solves (1.1b). As a result, the following control-to-state map

is well-defined, linear, and continuous. Due to the continuous embedding of U in C(¯¯¯¯Q) we can in fact consider the control-to-state map as

and we can define the admissible control set as

and thus the reduced minimization problem is given by

Towards this end, we are ready to state the well-posedness of (4.2) and equivalently (1.1).

The proof follows by using similar arguments as in the elliptic case, see [4, Theorem 4.1] and has been omitted for brevity. ∎

Next, we derive the first order necessary conditions under the following Slater condition.

Under this assumption, we have the following first order necessary optimality conditions.