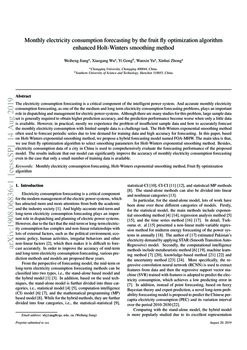 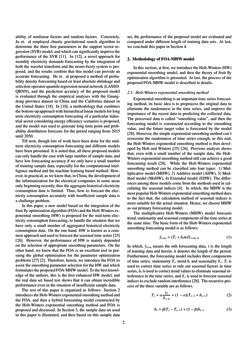 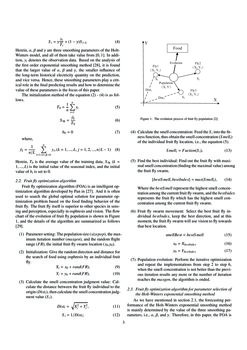 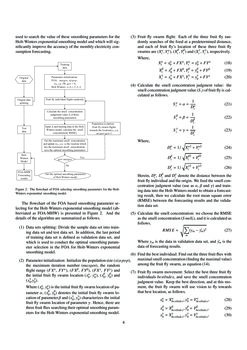 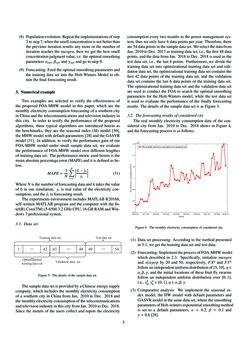 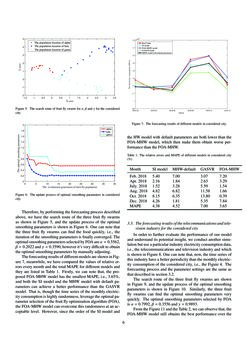 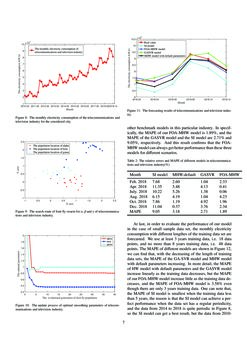 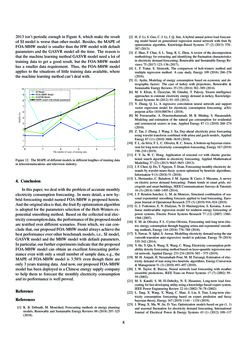 From the perspective of forecasting model, the mid-term or long-term electricity consumption forecasting methods can be classified into two types, i.e., the stand-alone based model and the hybrid model

DEBNATH2018297 Shao2017A . In addition, based on the used techniques, the stand-alone model is further divided into three categories, i.e., statistical model Tratar2016The Aydin2014Modeling , computation intelligence (CI) model KIRAN201293 Zhang2018A , and the mathematical programming (MP) based model forouzanfar2010modeling . While for the hybrid methods, they are further divided into four categories, i.e., the statistical-statistical tan2010day , statistical-CI da2019bottom , CI-CI Ju2013Application Chen2018Forecasting , and statistical-MP methods forouzanfar2010modeling . The stand-alone methods can also be divided into linear and nonlinear categories Hernandez2014A .

In particular, for the stand-alone model, lots of work have been done over these different categories of models. Firstly, for the statistical model, the main methods include exponential smoothing method Tratar2016The RENDONSANCHEZ2019916

. More specifically, the regressive convolution neural network (RCNN) is used to extract features from data and then the regressive support vector machine (SVR) trained with features is adopted to predict the electricity consumption, which achieves a low predicting error in

. In addition, instead of point forecasting, based on fuzzy Bayesian theory and expert prediction, a novel long-term probability forecasting model is proposed to predict the Chinese per-capita electricity consumption (PEC) and its variation interval over the period 2010-2030

Comparing with the stand-alone model, the hybrid model is more popularly studied due to its excellent representation ability of nonlinear factors and random factors. Concretely, Ju et. al employed chaotic gravitational search algorithm to determine the three free parameters in the support vector regression (SVR) model, and which can significantly improve the performance of the SVR Ju2013Application . In Chen2018Forecasting

, a novel approach for monthly electricity demands forecasting by the integration of both the wavelet transform and the neuro-fuzzy system is proposed, and the results confirm that this model can provide an accurate forecasting. He et. al proposed a method of probability density forecasting based on least absolute shrinkage and selection operator-quantile regression neural network (LASSO-QRNN), and the prediction accuracy of the proposed model is evaluated through the empirical analyses with the Guangdong province dataset in China and the California dataset in the United States

, a methodology that combines the bottom-up approach with hierarchical linear models for long term electricity consumption forecasting of a particular industrial sector considering energy efficiency scenarios is proposed, and the model was used to generate long term point and probability distribution forecasts for the period ranging from 2015 until 2050.

Till now, though lots of work have been done for the mid-term electricity consumption forecasting and different models have been presented. It is noted that, all these proposed models can only handle the case with large number of sample data, and have low forecasting accuracy if we only have a small number of training sample data, especially for the computational intelligence method and the machine learning based method. However, in practical, as we know that, in China, the development of the informatization for the electrical companies in some areas only beginning recently, thus the aggregate historical electricity consumption data is limited. Thus, how to forecast the electricity consumption accurately with insufficient sample data is a challenge problem.

In this paper, a new model based on the integration of the fruit fly optimization algorithm (FOA) and the Holt-Winters exponential smoothing (HW) is proposed for the mid-term electricity consumption forecasting, to handle the situation that we have only a small number of aggregated historical electricity consumption data. On the one hand, HW is known as a common approach and used to forecast the seasonal time series Holt2004Forecasting Winters1960Forecasting . However, the performance of HW is mainly depended on the selection of appropriate smoothing parameters. On the other hand, we know that the FOA is an excellent tool in pursuing the global optimization for the parameter optimization problems Pan2012A Li2013A . Therefore, herein, we introduce the FOA to assist the smoothing parameter selection for the HW and which formulates the proposed FOA-MHW model. To the best knowledge of the authors, this is the first enhanced HW model, and the real data set based test shows that it can obtain incredible performance even in the situation of insufficient sample data.

The rest of this paper is organized as follows: Section 2 introduces the Holt-Winters exponential smoothing method and the FOA, and then a hybrid forecasting model constructed by the Holt-Winters exponential smoothing method and FOA is proposed and discussed. In Section 3, the sample data set used in this paper is illustrated, and then based on this sample data set, the performance of the proposed model are evaluated and compared under different length of training data sets. At last, we conclude this paper in Section 4.

In this section, at first, we introduce the Holt-Winters (HW) exponential smoothing model, and then the theory of fruit fly optimization algorithm is presented. At last, the process of the proposed FOA-MHW model is described in details.

The multiplicative Holt-Winters (MHW) model forecasts trend, stationarity and seasonal components of the time series at the same time. The basic form of the Holt-Winters exponential smoothing forecasting model is as follows:

In which, ^yt+m means the mth forecasting data, t is the length of training data and herein, it denotes the length of the period. Furthermore, the forecasting model includes three components of time series: stationarity Tt, trend bt and seasonality St. Tt is used to correct time series to rule out seasonal factors in time series, bt is used to correct trend values to eliminate seasonal interference in the time series, and St is used to forecast seasonal indices to exclude random interference ForeastBook . The recursive process of the three variable are as follows.

Herein, α, β and γ are three smoothing parameters of the Holt-Winters model, and all of them take value from [0,1]. In addition, yt denotes the observation data. Based on the analysis of the first order exponential smoothing method ForeastBook , it is found that the larger value of α, β and γ, the smaller influence of the long-term historical electricity quantity on the prediction, and vice versa. Hence, these smoothing parameters play a critical role in the final predicting results and how to determine the value of these parameters is the focus of this paper.

The initialization method of the equation (2) - (4) is as follows.

Fruit fly optimization algorithm (FOA) is an intelligent optimization algorithm developed by Pan in Pan2012A . And it is often used to search the global optimal solution for parameter optimization problem based on the food finding behavior of the fruit fly. The fruit fly itself is superior to other species in sensing and perception, especially in osphresis and vision. The flow chart of the evolution of fruit fly population is shown in Figure 1, and the details of the algorithm are summarized as follows Cao2016Support .

As we have mentioned in section 2.1, the forecasting performance of the Holt-Winters exponential smoothing method is mainly determined by the value of the three smoothing parameters, i.e., α, β, and γ. Therefore, in this paper, the FOA is used to search the value of these smoothing parameters for the Holt-Winters exponential smoothing model and which will significantly improve the accuracy of the monthly electricity consumption forecasting.

The flowchart of the FOA based smoothing parameter selecting for the Holt-Winters exponential smoothing model (abbreviated as FOA-MHW) is presented in Figure 2. And the details of the algorithm are summarized as follows.

Two examples are selected to verify the effectiveness of the proposed FOA-MHW model in this paper, which are the monthly electricity consumption forecasting of a southern city in China and the telecommunications and television industry in this city. In order to testify the performance of the proposed algorithms, three typical algorithms are introduced herein as the benchmarks, they are the seasonal index (SI) model WANG2012109 , the MHW model with default parameters ForeastBook and the GASVR model OYEHAN201885 . In addition, to verify the performance gain of our FOA-MHW model under small sample data set, we evaluate the performance of FOA-MHW model over different lengthes of training data set. The performance metric used herein is the mean absolute percentage error (MAPE) and it is defined as below.

Where N is the number of forecasting data and it takes the value of 6 in our simulation. yt is real value of the electricity consumption, and the ^yt is forecasting result.

3.2 The forecasting results of considered city

The real monthly electricity consumption data of the considered city from Jan. 2010 to Dec. 2018 shows in Figure 4, and the forecasting process is as follows.

The forecasting results of different models are shown in Figure 7, meanwhile, we have compared the values of relative errors every month and the total MAPE for different models and they are listed in Table 1. Firstly, we can note that, the proposed FOA-MHW model has the smallest MAPE, i.e., 3.65%, and both the SI model and the MHW model with default parameters can achieve a better performance than the GASVR model. That is, though the time series of the monthly electricity consumption is highly randomness, leverage the optimal parameter selection of the fruit fly optimization algorithm (FOA), the FOA-MHW model can overcome this randomness at an acceptable level. However, since the order of the SI model and the HW model with default parameters are both lower than the FOA-MHW model, which then make them obtain worse performance than the FOA-MHW.

3.3 The forecasting results of the telecommunications and television industry for the considered city

In order to further evaluate the performance of our model and understand its potential insight, we conduct another simulation but use a particular industry electricity consumption data, i.e., the telecommunications and television industry and which is shown in Figure 8. One can note that, now, the time series of this industry have a better periodicity than the monthly electricity consumption of the considered city, i.e., the Figuie 4. The forecasting process and the parameter settings are the same as that described in section 3.2.

From the Figure 11 and the Table 2, we can observe that, the FOA-MHW model still obtains the best performance over the other benchmark models in this particular industry. In specifically, the MAPE of our FOA-MHW model is 1.89%, and the MAPE of the GASVR model and the SI model are 2.71% and 9.05%, respectively. And this result confirms that the FOA-MHW model can always get better performance than these three models for different scenarios.

In this paper, we deal with the problem of accurate monthly electricity consumption forecasting. In more detail, a new hybrid forecasting model named FOA-MHW is proposed herein. And the original idea is that, the fruit fly optimization algorithm is adopted for the parameters selection of the Holt-Winters exponential smoothing method. Based on the collected real electricity consumption data, the performance of the proposed model are testified over different scenarios. From which, we can conclude that, our proposed FOA-MHW model always achieve the best performance over other benchmark models, i.e., SI model, GASVR model and the MHW model with default parameters. In particular, our further experiments indicate that the proposed FOA-MHW model can obtain an excellent forecasting performance even with only a small number of sample data, e.g., the MAPE of FOA-MHW model is 3.58% even though there are only 3 years training data. And now, our proposed FOA-MHW model has been deployed in a Chinese energy supply company to help them to forecast the monthly electricity consumption and its performance is well proved.