We study the problem of detecting a drift change of a Brownian motion under various extensions of the classical case. Specifically, we consider the case of a random post-change drift and examine monotonicity properties of the solution with respect to different model parameters. Moreover, robustness properties -- effects of misspecification of the underlying model -- are explored. 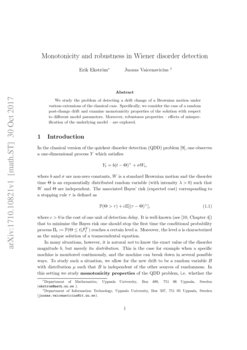 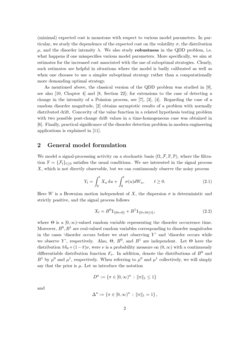 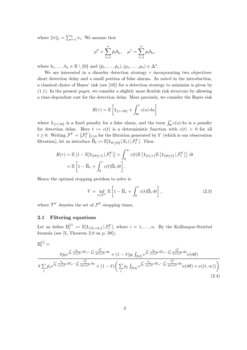 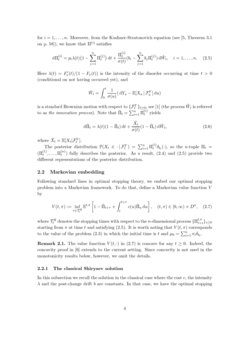 In the classical version of the quickest disorder detection (QDD) problem, see [9], one observes a one-dimensional process Y which satisfies

where b and σ are non-zero constants, W is a standard Brownian motion and the disorder time Θ

is an exponentially distributed random variable (with intensity

λ>0) such that W and Θ are independent. The associated Bayes’ risk (expected cost) corresponding to a stopping rule τ is defined as

Πt:=P(Θ≤t|FYt) reaches a certain level a. Moreover, the level a is characterized as the unique solution of a transcendental equation.

In many situations, however, it is natural not to know the exact value of the disorder magnitude b, but merely its distribution. This is the case for example when a specific machine is monitored continuously, and the machine can break down in several possible ways. To study such a situation, we allow for the new drift to be a random variable B with distribution μ such that B is independent of the other sources of randomness. In this setting we study monotonicity properties of the QDD problem, i.e. whether the (minimal) expected cost is monotone with respect to various model parameters. In particular, we study the dependence of the expected cost on the volatility σ, the distribution μ, and the disorder intensity λ. We also study robustness

obtains asymptotic results of a problem with normally distributed drift. Concavity of the value function in a related hypothesis testing problem with two possible post-change drift values in a time-homogeneous case was obtained in

[6]. Finally, practical significance of the disorder detection problem in modern engineering applications is explained in [11].

We model a signal-processing activity on a stochastic basis (Ω,F,F,P), where the filtration F={Ft}t≥0 satisfies the usual conditions. We are interested in the signal process X, which is not directly observable, but we can continuously observe the noisy process

Here W is a Brownian motion independent of X, the dispersion σ is deterministic and strictly positive, and the signal process follows

where Θ is a [0,∞)-valued random variable representing the disorder occurrence time. Moreover, B0,B1 are real-valued random variables corresponding to disorder magnitudes in the cases ‘disorder occurs before we start observing Y’ and ‘disorder occurs while we observe Y’, respectively. Also, Θ, B0, and B1 are independent. Let Θ have the distribution ~πδ0+(1−~π)ν, were ν is a probability measure on (0,∞) with a continuously differentiable distribution function Fν. In addition, denote the distributions of B0 and B1 by μ0 and μ1, respectively. When referring to μ0 and μ1 collectively, we will simply say that the prior is μ. Let us introduce the notation

The model studied in the paper is a generalisation of the classical disorder occurrence model [9]. Firstly, the exponential disorder distribution used in the classical problem is replaced by an arbitrary distribution with time-dependent intensity. The generalisation is advantageous in situations when the intensity of the disorder occurrence changes with time. For example, if the disorder corresponds to a component failure in a system, for many physical systems, the failure intensity is known to increases with age. Also, if occurrence of the disorder depends on external factors such as weather, then such dependency can be incorporated into the time-dependent disorder intensity from an accurate weather forecast. Moreover, in contrast to the classical problem in which the disorder magnitude is known in advance, in this generalisation, the magnitude takes a value from a range of possible values. Returning to the component failure example, the different possible disorder magnitudes would represent different types of component failure. In the problem of detecting malfunctioning atomic clocks [11], the disorder corresponds to a systematic drift of a clock. The sign of the disorder magnitude reflects whether a clock starts to go too slow or two fast while the absolute value represents the severity of the drift. In addition, the different distributions μ0, μ1 of B0 and B1 and the weight ~π reflect the prior knowledge about how likely different disorder magnitudes are if the disorder happened before or while observing Y. For instance, such model flexibility is relevant when we start observing the system after a particular incident (e.g. a storm if the system is affected by the weather) and we know that the distribution of possible disorder magnitudes after the incident is different than under normal operating conditions. From a mathematical point of view, ~π and B0 allows us to give a statistical interpretation to an arbitrary starting point in the Markovian embedding (2.6) of the original optimal stopping problem studied later.

We point out that the finite support assumption on μ is made for notational convenience. As any distribution can be approximated arbitrarily well by finitely supported ones, obviously, our monotonicity results below can be extended to general disorder magnitude distributions.

where 1{τ<Θ} is a fixed penalty for a false alarm and the term ∫τΘc(u)du is a penalty for detection delay. Here t↦c(t) is a deterministic function with c(t)>0 for all t≥0. Writing FY={FYt}t≥0 for the filtration generated by Y (which is our observation filtration), let us introduce ~Πt:=E[1R∖{0}(Xt)|FYt]. Then

Hence the optimal stopping problem to solve is

where TY denotes the set of FY-stopping times.

Here λ(t)=F′ν(t)/(1−Fν(t)) is the intensity of the disorder occurring at time t>0 (conditional on not having occurred yet), and

is a standard Brownian motion with respect to {FYt}t≥0, see [1] (the process ^Wt is referred to as the innovation process). Note that ~Πt=∑ni=1Π(i)t yields

where TΠt denotes the stopping times with respect to the n-dimensional process {Πt,πt+s}s≥0 starting from π at time t and satisfying (2.4). It is worth noting that V(t,π) corresponds to the value of the problem (???) in which the initial time is t and μ0=∑ni=1πiδbi.

The value function V(t,⋅) in (2.6) is concave for any t≥0. Indeed, the concavity proof in [6] extends to the current setting; we omit the details.

In this subsection we recall the solution in the classical case where the cost c, the intensity λ and the post-change drift b are constants. In that case, we have the optimal stopping problem

with an underlying diffusion process

Here a∈(0,1) is the free-boundary, and it can be determined as the solution of a certain transcendental equation. Moreover, the stopping time τ:=inf{t≥0:Πt≥a} is optimal in (2.7), and one can check that the value function U is decreasing and concave.

3.1 Monotonicity properties of the value function

In this section, we study parameter dependence of the optimal stopping problem (2.6). In particular, we investigate how the value function changes when we alter parameters of the probabilistic model, which include the prior for the drift magnitude and the prior for the disorder time.

The effects of adding more noise, stretching out the prior by scaling, and increasing the observation cost are explained by the following theorem.

For simplicity of notation, and without loss of generality, we consider the case t=0 in the proofs below.

The monotonicity of the minimal Bayes’ risk with respect to volatility σ is of course not so surprising: more noise in the observation process gives a smaller signal-to-noise ratio, which slows down the speed of learning. It is less clear how a change in the disorder intensity λ should affect the value function under a general disorder magnitude distribution. However, we have the following comparison result for the case of constant parameters.

Theorem 3.2 (Monotonicity in the intensity for constant parameters).

Without loss of generality, we only consider the case t=0. Let π∈[0,1], denote by Y′ the observation process corresponding to the model specification (b,σ,λ′,c), and let Π′ denote the corresponding process Π started from π at time 0. Let τ∈TY′ be a bounded stopping time. Then, applying (a generalised version of) Ito’s formula and taking expectations at the stopping time τ, we get

where we used the monotonicity of U and the fact that

at all points away from the optimal stopping boundary of Shiryaev’s classical problem, compare (2.8). Taking the infimum over bounded stopping times τ, we get U(π)≤V(0,π), which finishes the proof. ∎

Robustness concerns how a possible misspecification of the model parameters affects the performance of the detection strategy when evaluated under the real physical measure. In this section, we use coupling arguments to study robustness properties with respect to the disorder magnitude and disorder time. For simplicity, we assume that the parameters λ, c and σ are constant so that we have a time-independent case; generalizations to the time-dependent case are straightforward but notationally more involved.

Thus we assume that the signal process follows

where B0,B1 are random variables with distributions μ0,μ1 respectively, and Θ has the distribution ν~π:=~πδ0+(1−~π)ν, where ν is an exponential distribution with intensity λ. Let us simply write μ:=(μ0,μ1).

compare (2.1). Also, we introduce the notation

Here Yμ is the observation process for a setting in which the post-change drift has distribution μ and the disorder happens at Θ. The process Yδl is the observation process and ~Πδlδl is the corresponding conditional probability process in the situation of a post-change drift l that occurs at Θl. Moreover, the process ~Πμδl represents the conditional probability process calculated as if the drift change is described by (δl,Θl) in the scenario where the true drift-change is given by (μ,Θ).

Now, let a:=al denote the optimal stopping boundary for the classical Shiryaev one-dimensional problem in the model (δl,Θl), and define

Here τδlδl is the optimal stopping time in the model (δl,Θl), and τμδl is the (sub-optimal) stopping time and Vμδl is the corresponding cost for someone who believes in (δl,Θl), whereas the true model is (μ,Θ).

as in Section 2, and define

Theorem 3.3 (Robustness with respect to disorder magnitude and intensity).

Note that (3.3) and (3.5) correspond to situations in which the tester uses a misspecified model. More precisely, filtering and stopping are performed as if the underlying model had a one-point distribution as the disorder magnitude prior (the classical Shiryaev model). Such a situation may appear due to model miscalibration but is also relevant in situations with limited computational resources as the tester can deliberately choose to under/overestimate the actual parameters in order to use a simpler detection strategy. Equation (3.3) thus gives an upper bound for the expected loss when the classical Shiryaev model is employed. In (3.4), on the other hand, filtering is performed according to the correct model but the simple Shiryaev threshold strategy (suboptimal) is used for stopping.

In the notation above, assume that λ=λl so that there is no mis-specification of the intensity. Moreover, assume that supp(μ)⊆[l,r], where 0<l<r. Then

so monotonicity in the disorder magnitude holds when comparing with deterministic magnitudes. Furthermore,

so the increase in the Bayes’ risk due to underestimation (with a constant) of the disorder magnitude is bounded by the difference of two value functions of the classical Shiryaev problem.

We finish with some implications concerning the stopping strategy τD:=inf{t≥0:Πt∈D}, where D={π∈Δn:V(π)=1−π} is a standard abstractly defined optimal stopping set, see [8] (we now assume that we are in the case of time-independent coefficients so that the value function is merely a function of π∈Dn). The concavity of V, compare Remark 2.2, yields the existence of a boundary γ⊂Δn separating D from its complement Δn∖D. The following result provides a more accurate location of the boundary γ.

Assume that the coefficients c, σ and λ are constant and that supp(μ)⊆[l,r], where 0<l<r. Let al and ar denote the boundaries in the classical Shiryaev problem with disorder magnitude l and r, respectively. Then

i.e. the stopping boundary is contained in a strip. Moreover, the optimal strategy τD satisfies