Autonomous vehicles and driver assistance systems utilize maps of 3D semantic landmarks for improved decision making. However, scaling the mapping process as well as regularly updating such maps come with a huge cost. Crowdsourced mapping of these landmarks such as traffic sign positions provides an appealing alternative. The state-of-the-art approaches to crowdsourced mapping use ground truth camera parameters, which may not always be known or may change over time. In this work, we demonstrate an approach to computing 3D traffic sign positions without knowing the camera focal lengths, principal point, and distortion coefficients a priori. We validate our proposed approach on a public dataset of traffic signs in KITTI. Using only a monocular color camera and GPS, we achieve an average single journey relative and absolute positioning accuracy of 0.26 m and 1.38 m, respectively. 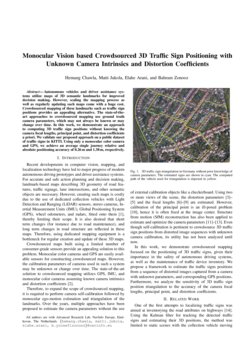 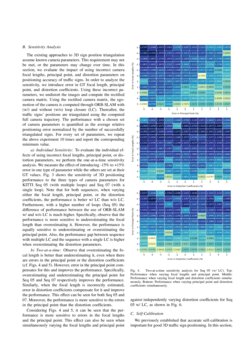 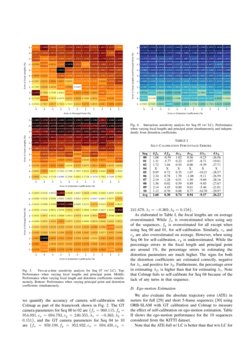 [13], thereby limiting their scope. It is also desired that short term changes (for instance due to road maintenance), and long term changes in road structure are reflected in these maps. Therefore, using dedicated mapping equipment is a bottleneck for regular creation and update of these 3D maps.

Therefore, to expand the scope of crowdsourced mapping, it is required to perform camera self-calibration followed by monocular ego-motion estimation and triangulation of the landmarks. Over the years, multiple approaches have been proposed to estimate the camera parameters without the use of external calibration objects like a checkerboard. Using two or more views of the scene, the distortion parameters [4, 16, 15] and the focal lengths [3, 10, 11, 25] are estimated. However, calibration of the principal point is an ill-posed problem [6], hence it is often fixed at the image center. Structure from motion (SfM) reconstruction has also been applied to estimate and optimize the camera parameters [19, 22, 23]. Even though self-calibration is pertinent to crowdsource 3D traffic sign positions from distorted image sequences with unknown camera calibration, its utility has not been analyzed until now.

In this work, we demonstrate crowdsourced mapping focused on the positioning of 3D traffic signs, given their importance in the safety of autonomous driving systems, as well as the maintenance of traffic device inventory. We propose a framework to estimate the traffic signs positions from a sequence of distorted images captured from a camera with unknown parameters, and corresponding GPS positions. Furthermore, we analyze the sensitivity of 3D traffic sign position triangulation to the accuracy of the camera focal lengths, principal point, and distortion coefficients.

. Using the Kalman filter for tracking the detected traffic signs and estimating their 3D positions, the method was limited to static scenes with the collection vehicle moving at a maximum speed of 5 km/h. In contrast, Madeira et al.

[17] developed a mobile mapping system that estimated the positions of traffic signs through photogrammetric triangulation within a least-squares approach, given the vehicle position from GPS, IMU, and wheel odometry fusion. In order to include signs found in crowded locations, Benesova et al. [2] proposed an alternative approach of triangulating traffic sign positions using dedicated hand held devices. For extending to a real-time use-case, an approximate method was also proposed [14]. Another real-time traffic sign positioning method was proposed by Welzel et al. [28], using only a monocular color camera and GPS. However, the ground truth size and height of traffic signs in each class were used for computing their 3D positions to an accuracy of 1m. Similarly, a method for mapping positions of traffic lights was proposed [8]. Recently, Dabeer et al. [5] presented a method for crowdsourcing 3D positions and orientations of traffic signs using low-cost sensors. They demonstrated a single journey average relative and absolute positioning accuracy of 46cm and 57cm, respectively. However, all of the aforementioned approaches either used dedicated collection hardware for computing traffic sign positions, or assumed known accurate camera focal lengths, principal point, and distortion parameters.

In this section, we describe our proposed framework for GPS and monocular camera based 3D traffic sign positioning, without assuming any prior knowledge of the camera parameters. Given a sequence of n color images and corresponding GPS positions as input, we output a set of m detected traffic signs with their corresponding classes, absolute positions as well as the relative positions for the frames in which the sign was detected. An overview of the proposed approach is shown in Fig. 2. Hereafter, we describe the steps of computing 3D positions of traffic signs detected in crowdsourced image sequences.

Crowdsourced mapping without prior knowledge of camera intrinsics and distortion parameters necessitates camera self-calibration. We use the pinhole camera model with zero skew

and the polynomial radial distortion model with two parameters

fx and fy are the focal lengths in x and y, the principal point is represented by (cx,cy), and λ1,λ2 are the distortion coefficients. The distance from the principal point is given by r. In this work, we use Structure from Motion based Colmap [22] with Oriented FAST and Rotated BRIEF (ORB) features [21] for self-calibration. Since self-calibration suffers from ambiguity for the case of pure translation [24, 29] due to scene depth and distortion conflation, we use the sub-sequences where the vehicle is making a turn. The sub-sequences containing the turns are extracted through the Ramer-Douglas-Peucker (RDP) algorithm [20, 7] by decimating the GPS trajectory into a similar curve with fewer points, where each point represents a turn. Thereafter, the calibration is performed in two steps. In the first step, it is assumed that fx=fy, the principal point (cx,cy)=12⋅(w,h), where w and h are the width and height of the images respectively. The distortion is modeled using only λ1, while λ2=0. In the second step, the aforementioned restrictions are relaxed and all the parameters are optimized simultaneously.

After computing the camera intrinsics and the distortion parameters, the camera ego-motion needs to be estimated as shown in Fig. 2. For this step, the images are first undistorted using the estimated parameters, and the rectified camera matrix is calculated. Thereafter, we use state-of-the-art geometry based monocular approach ORB-SLAM [18] for camera ego-motion estimation. Since monocular ego-motion estimation is valid up to scale, we then use the GPS positions to scale the estimated trajectory using the Umeyama’s algorithm [27]. Firstly the GPS positions are converted to metric coordinates under the Mercator assumption such that

between them. The scaled and aligned camera positions are therefore given by

Finally, we compute the 3D traffic sign position through triangulation. For each sign observed in a track of frames, the initial estimate of position is computed through the mid-point algorithm [26]. In this approach, the coordinates (ci,j) of sign i in frame j

We can either use the complete trajectory for triangulation of the sign positions, or use only those sub-sequences where the sign was observed. We compare the impact of using the full and short sequences on the accuracy of sign triangulation in section IV-E.

Thereafter, given the absolute sign positions, the relative positions preli,j for each frame j in which the sign was observed can be calculated.

If the relative depth for any sign is calculated to be negative, we consider it to be a failed triangulation and discard it. Thereafter, the Mercator projection assumption is used to convert the estimated absolute traffic sign positions to the corresponding latitudes and longitudes.

In this section, we demonstrate the necessity of good self-calibration and the quantitative validity of our approach to single journey 3D traffic sign positioning without prior knowledge of camera parameters including distortion.

Previous works on traffic sign positioning measured their accuracy using closed source datasets [28, 5]. Instead, we measure the 3D positioning accuracy of our approach against ground truth (GT) traffic sign positions111https://github.com/hemangchawla/3d-groundtruth-traffic-sign-positions.git in KITTI that we make publicly available to facilitate further research. This dataset was created using the matched images and LiDAR scans for sequences (Seq) 00 to 10 in the KITTI raw dataset [9] (except Seq 03 which is missing from the raw dataset). Using the low-resolution distorted images and corresponding GPS positions from the 10 sequences, we apply the proposed approach (see Fig. 2) to triangulate the relative and absolute positions of detected traffic signs.

The existing approaches to 3D sign position triangulation assume known camera parameters. This requirement may not be met, or the parameters may change over time. In this section, we evaluate the impact of using incorrect camera focal lengths, principal point, and distortion parameters on positioning accuracy of traffic signs. In order to analyze the sensitivity, we introduce error in GT focal length, principal point, and distortion coefficients. Using these incorrect parameters, we undistort the images and compute the rectified camera matrix. Using the rectified camera matrix, the ego-motion of the camera is computed through ORB-SLAM with (w/) and without (w/o) loop closure (LC). Thereafter, the traffic signs’ positions are triangulated using the computed full camera trajectory. The performance with a chosen set of camera parameters is quantified as the average relative positioning error normalized by the number of successfully triangulated signs. For every set of parameters, we repeat the above experiment 10 times and report the corresponding minimum value.

We also evaluate the absolute trajectory error (ATE) in meters for full [12] and short 5-frame sequences [30] using ORB-SLAM with GT calibration and Colmap to measure the effect of self-calibration on ego-motion estimation. Table II shows the ego-motion performance for the 10 sequences considered from the KITTI dataset.

Note that the ATE-full w/ LC is better than that w/o LC for both calibrations. However, ATE-5 mean and std are better w/o LC. While using Colmap for self-calibration slightly improves the ATE-5 mean implying better local agreement with the GT trajectory, the ATE-full is much worse implying poorer absolute localization. Since Colmap is unable to self-calibrate Seq 04 due to a lack of turns, its ego-motion estimation is not feasible. Also, Seq 01 suffers from tracking failure when using either of the calibrations.

We evaluate the accuracy of crowdsourced 3D traffic sign positioning when triangulating using ORB-SLAM (w/ and w/o LC), and compare the effect of using short and full trajectories for triangulation (see Sec. III-C). In order to do so, we compute the mean relative error in sign positioning for all the sequences and normalize it by the number of signs successfully triangulated.

Table III shows the mean relative errors using full (ef) and short (es) trajectories. The number of signs triangulated is denoted by m. Note that Seq 01 is not triangulated due to the tracking failure of ORB-SLAM. Seq 04 is also not triangulated because of the failure to self-calibrate with Colmap. The best performance is given by the use of ORB-SLAM w/ LC through short trajectories. Better performance with short trajectories can be attributed to improved local scaling and alignment of estimated and GPS trajectories. Using loop closure also improves orientation due to global bundle adjustment, thereby resulting in more accurate triangulation. Therefore, it is preferable to triangulate the signs using only those sub-sequences where the sign was observed. A total of 42 traffic signs were successfully triangulated using the proposed method.

Note that we measure the positioning accuracy of traffic signs with different classes over multiple sequences of crowdsourced data. Hence, our results have a better representation of the various scenarios in which the traffic signs can be mapped using only a monocular camera and GPS, without prior knowledge of camera parameters.

This work demonstrates monocular vision and GPS based crowdsourced mapping without knowing the camera focal lengths, principal point, and distortion coefficients a priori. Utilizing self-calibration, monocular ego-motion estimation, and triangulation in a single framework we accurately predict the 3D positions of traffic signs in a single journey. We also analyze the sensitivity of triangulation accuracy upon the accuracy of the camera parameters used. In the future, this accuracy may be improved by mapping through multiple journeys over the same path. We are also exploring deep learning based approaches for extending the map coverage to sequences in which multi-view-geometry based self-calibration and ego-motion estimation presently fail.