Monads and "do" notation in the Wolfram Language 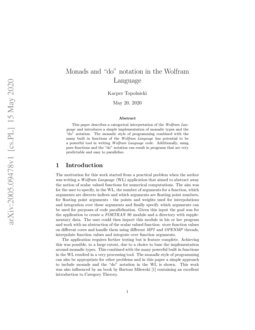 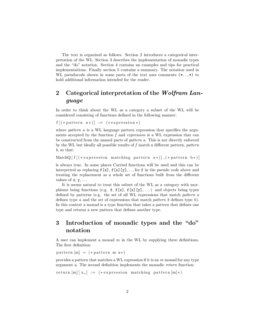 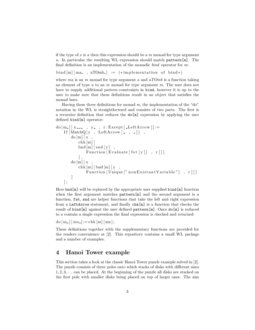 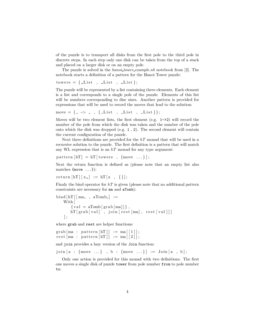 XPath is a language for addressing parts of an XML document. We give an ...
Baltasar Trancón y Widemann, et al. ∙

Writing Across the World's Languages: Deep Internationalization for Gboard, the Google Keyboard

Linear type systems have a long and storied history, but not a clear pat...
Jean-Philippe Bernardy, et al. ∙

FORTRAN 90 module and a directory with supplementary data. The user could then import this module in his or her program and work with an abstraction of the scalar valued function: store function values on different cores and handle them using different MPI and OPENMP threads, interpolate function values and integrate over function arguments.

The application requires further testing but is feature complete. Achieving this was possible, to a large extent, due to a choice to base the implementation around monadic types. This combined with the many powerful built in functions in the WL resulted in a very processing tool. The monadic style of programming can also be appropriate for other problems and in this paper a simple approach to include monads and the “do” notation in the WL is shown. This work was also influenced by an book by Bartosz Milewski [1] containing an excellent introduction to Category Therory.

The text is organized as follows. Section 2 introduces a categorical interpretation of the WL. Section 3 describes the implementation of monadic types and the “do” notation. Section 4 contains an examples and tips for practical implementations. Finally section 5 contains a summary. The notation used in WL pseudocode shown in some parts of the text uses comments (*...*) to hold additional information intended for the reader.

2 Categorical interpretation of the Wolfram Language

In order to think about the WL as a category a subset of the WL will be considered consisting of functions defined in the following manner:

where pattern a is a WL language pattern expression that specifies the arguments accepted by the function f and expression is a WL expression that can be constructed from the named parts of pattern a. This is not directly enforced by the WL but ideally all possible results of f match a different pattern, pattern b, so that:

is always true. In some places Curried functions will be used and this can be interpreted as replacing f[x], f[x][y], …for f in the pseudo code above and treating the replacement as a whole set of functions built from the different values of x, y, …

It is seems natural to treat this subset of the WL as a category with morphisms being functions (e.g. f, f[x], f[x][y], …) and objects being types defined by patterns (e.g. the set of all WL expressions that match pattern a defines type a and the set of expressions that match pattern b defines type b). In this context a monad is a type function that takes a pattern that defines one type and returns a new pattern that defines another type.

3 Introduction of monadic types and the “do” notation

A user can implement a monad m in the WL by supplying three definitions. The first definition:

provides a pattern that matches a WL expression if it is an m monad for any type argument a. The second definition implements the monadic return function:

if the type of x is a then this expression should be a m monad for type argument a. In particular the resulting WL expression should match pattern[m]. The final definition is an implementation of the monadic bind operator for m:

Having these three definitions for monad m, the implementation of the “do” notation in the WL is straightforward and consists of two parts. The first is a recursive definition that reduces the do[m] expression by applying the user defined bind[m] operator:

Here bnd[m] will be replaced by the appropriate user supplied bind[m] function when the first argument matches pattern[m] and the second argument is a function, fst, snd are helper functions that take the left and right expression from a LeftArrow statement, and finally chk[m] is a function that checks the result of bind[m] against the user defined pattern[m]. Once do[m] is reduced to a contain a single expression the final expression is checked and returned:

These definitions together with the supplementary functions are provided for the readers convenience at [2]. This repository contains a small WL package and a number of examples.

This section takes a look at the classic Hanoi Tower puzzle example solved in [2]. The puzzle consists of three poles onto which stacks of disks with different sizes 1,2,3,… can be placed. At the beginning of the puzzle all disks are stacked on the first pole with smaller disks being placed on top of larger ones. The aim of the puzzle is to transport all disks from the first pole to the third pole in discrete steps. In each step only one disk can be taken from the top of a stack and placed on a larger disk or on an empty pole.

The puzzle is solved in the hanoi_tower_example.nb notebook from [2]. The notebook starts a definition of a pattern for the Hanoi Tower puzzle:

The puzzle will be represented by a list containing three elements. Each element is a list and corresponds to a single pole of the puzzle. Elements of this list will be numbers corresponding to disc sizes. Another pattern is provided for expressions that will be used to record the moves that lead to the solution:

Next three definitions are provided for the hT monad that will be used in a recursive solution to the puzzle. The first definition is a pattern that will match any WL expression that is an hT monad for any type argument:

Next the return function is defined as (please note that an empty list also matches {move ...}):

Finaly the bind operator for hT is given (please note that no additional pattern constraints are necessary for ma and aTomb):

where grab and rest are helper functions:

and join provides a lazy version of the Join function:

Only one action is provided for this monad with two definitions. The first one moves a single disk of puzzle tower from pole number from to pole number to:

The second one moves n disks from pole number from to pole number to. This time the definition uses the “do” notation and recursion:

A solution to the puzzle with three disks on the first pole in the initial configuration can be obtained by evaluating:

where makeTower[3] prepares the initial configuration of the puzzle. The result is:

The first element of this expression is the final configuration of the solved puzzle. The second element is a list containing the moves used to obtain the solution.

The repository [2] contains a couple more simple examples including a list monad and a maybe monad. The reader is encouraged to download and explore these notebooks.

The Wolfram Language comes with a very powerful set of built in functions. The flexibility of this language makes it possible to program in many different styles. Such freedom, however, can be overwhelming and it is a good idea to conform to styles of programming that are tailored to particular problems. Combining the monadic style of programming with the powerful standard library of the Wolfram Language can be very useful for problems that require a functional solution.