Automated segmentation in medical image analysis is a challenging task that requires a large amount of manually labeled data. However, manually annotating medical data is often laborious, and most existing learning-based approaches fail to accurately delineate object boundaries without effective geometric constraints. Contrastive learning, a sub-area of self-supervised learning, has recently been noted as a promising direction in multiple application fields. In this work, we present a novel Contrastive Voxel-wise Representation Learning (CVRL) method with geometric constraints to learn global-local visual representations for volumetric medical image segmentation with limited annotations. Our framework can effectively learn global and local features by capturing 3D spatial context and rich anatomical information. Specifically, we introduce a voxel-to-volume contrastive algorithm to learn global information from 3D images, and propose to perform local voxel-to-voxel contrast to explicitly make use of local cues in the embedding space. Moreover, we integrate an elastic interaction-based active contour model as a geometric regularization term to enable fast and reliable object delineations in an end-to-end learning manner. Results on the Atrial Segmentation Challenge dataset demonstrate superiority of our proposed scheme, especially in a setting with a very limited number of annotated data. 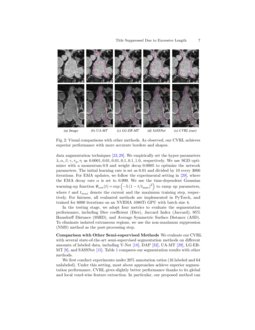 Learning from just a few labeled examples while leveraging a large amount of unlabeled data is the long-standing pursuit in the machine learning community, which is especially crucial for the medical imaging domain. Generating reliable manual annotations of 3D imaging data at scale is expensive, time-consuming, and may require domain-specific expertise. Due to privacy concerns, another challenge in medical imaging is relatively small training datasets. To this end, contrastive learning applied to self-supervised learning (SSL) is a promising direction since they have recently shown great promise in learning useful representations with limited human supervisions to achieve remarkable results in vision tasks

in contrastive learning has brought significant progress in SSL. The central idea is to learn powerful representations that optimize similarity constraints to discriminate similar (positive) and dissimilar (negative) pairs within a dataset. The major stream of subsequent work focuses on the choice of dissimilar pairs which decide the quality of learned representations. The loss function used to contrast is chosen from several options, such as InfoNCE

[22], Triplet [26], and so on. Recently, Chaitanya et al. [3] extended contrastive learning framework to learn global and local cues, which require large amounts of negative pairs. Second, the recent analysis [4] has suggested that large batch size may achieve stronger performance gains, but such training is expensive in terms of both time and computational resource. Third, most works mainly focus on exploring 2D/2.5D context instead of 3D space.

In the medical imaging domain, substantial efforts [31, 16, 20, 14, 29, 2] have been devoted to incorporating unlabeled data to improve network performance due to the limited 3D data and annotations. The most commonly training techniques are adversarial learning and consistency loss as regularization terms to encourage unsupervised mapping. Nie et al. [20] adopted adversarial training to select confident regions of unlabeled images for segmentation performance improvements. Yu et al. [29] designed a deep uncertainty-aware framework based on the mean-teacher scheme [24] to guide the student network to capture better features. Despite having success in superior performance gains, these methods ignore the intrinsic geometric structure of the image, such as border, which may fail in recognizing object contours.

In order to address the aforementioned challenges, several efforts [32, 11, 15, 28] have attempted to leverage shape priors to detect more accurate boundaries. Although those methods have achieved promising results, they may not guarantee a target topology in the test stage. Active Contour Models (ACM) [13] is a set of algorithms that, given an initial contour, dynamically fit an image boundary with geometric constraints. Thus, it may be appropriate in such cases, especially in medical imaging where the training dataset is too small to train a deep segmentation network. Recent works [6, 30, 17, 10, 5] used the energy function as the part of supervised loss in an end-to-end manner. However, these methods lack learning efficiency and suffer from a time-consuming mechanism that only involves comparing two binary images at a time.

In this paper, we present CVRL, an end-to-end semi-supervised framework that integrates contrastive learning with geometric constraints to learn global contexts and local features for more effective representation learning in 3D imaging. The motivation comes from the fact that feature presentations derived on the 2D context fail to utilize useful spacial contexts in the 3D domain, which may result in a huge performance degradation. Two key aspects distinguish from the recent advance [3]. First, in contrast to follow the standard contrastive learning setting [4] to perform slice-level global contrast, CVRL perform voxel-to-volume global contrast in 3D embedding space, which could capture rich anatomic information. The second important aspect concerns time and computational costs, which is challenging to apply in most real-wold applications.

Our contributions are three-fold: (1) we propose two contrasting strategies - global voxel-to-volume and local voxel-to-voxel contrast - to better utilize unlabeled data, which capture higher-order consistency in the well-structured global embedding space while making full use of voxel-wise similarities of the local context; (2) To address occasional inaccuracies along object boundaries, we then incorporate an active contour with elastica (ACE) loss as the regularization term for penalization on curvature region and accurate edge placements; (3) The results demonstrate that our segmentation network outperforms the state-of-the-art methods on the Atrial Segmentation Challenge dataset, and generates object segmentation with high-quality global shapes.

We aim at constructing an end-to-end voxel-wise contrastive algorithm with geometric constraints to learn useful representations in discriminative manner for semi-supervised volumetric medical imaging segmentation. An overview of the architecture is illustrated in Figure 1

. In the limited annotation setting, we train semi-supervised CVRL alongside two components - supervised and unsupervised learning objectives. Specifically, we propose a voxel-wise contrastive algorithm to learn global-level and local-level representations from 3D unlabeled data by regularizing the embedding space and exploring the geometric and spatial context of training voxels. The ACM model further enables the segmentation network to capture more rich details of image boundaries.

In our problem setting, we consider a set of training data (3D images) including N labeled data and M unlabeled data, where N≪M. For simplicity of exposition, we denote limited label data as Dl={(xi,yi)}Ni=1, and abundant unlabeled data as Du={(xi)}N+Mi=N+1, where xi∈RH×W×D are volume inputs, and yi∈{0,1}H×W×D are ground-truth labels. Specifically, we adopt V-Net [29] as the network backbone F(⋅), which consists of an encoder network e(⋅) and a decoder network d(⋅). To maximize mutual information between latent representations, we design a projection head G(⋅), that comprises one encoder network which is similar to e(⋅)

CVRL performs global voxel-to-volume contrast by using a novel 3D projection head G(⋅). Different from the standard setting [4, 3] of using MLP, which are designed for 2D image-level data, G(⋅) can encode rich spatial information, which can build a stronger ability to model spatial correlations in high-dimensional 3D space. To learn embeddings that measure these similarity relations across volumes, here we use InfoNCE loss [22]:

where u is the embedding of transformed version of the same x, i.e. u=G(F(t(x))) where t∈T are simple random 3D transformations [33, 23]. Similarly, u+, and u− are referred to as positive, and negative respectively in the parlance of contrastive learning. Here we denote ‘⋅’ as the inner (dot) product [27], and τg>0 denotes a temperature parameter for Lg. Recent work [27] shows that a large set of negatives (i.e., |N−I|) can improve the quality of learned representations in unsupervised contrastive training. In our experiments, we include all other feature maps except only the feature map itself from the same volume batches as negatives. In the unlabeled set, our global contrastive loss is defined as:

where N+I denotes embedding collections of the positive volume samples.

On one hand, global contrastive objectives uncover distinctive volume-level representations that benefits the training of downstream tasks, e.g. object classification, when limited labeled data is available. On the other hand, dense predictive tasks, e.g. semantic segmentation, may require more discriminative local representations. As complementary to global contrastive objectives, a promising local strategy may be vita for the downstream medical imaging tasks. With this insight, we propose to perform voxel-to-voxel local contrast to explicitly explore local relationships between voxel samples.

where Vi and N−i denote positives and negatives for feature voxel e(t(x))i at 3D location i, respectively. The positive is feature voxel e(t′(x))i under a different t′∈T; whereas negatives contain all mis-matched feature voxels: {e(t′(y))i:y≠x}⋃{e(t′(y))j:j≠i}. τl>0 denotes a temperature parameter for Ll. The local contrastive loss is written as follows:

Recent work [14, 24] show that using an exponential moving average (EMA) over network parameters is empirically shown to improve training stability and models’ final performance. With this insight, we introduce an EMA model with parameters θ as the moving-average of the parameters θ′ from the original network. Specifically, the architecture of EMA model follows the original model. At training step t, the update rule follows θt=mθt−1+(1−m)θ′t, where m∈[0,1) is momentum parameter. On the unlabeled set, we perform different perturbation operations on the unlabeled input volume sample xu, e.g. adding noise ϵ. To encourage training stability and performance improvements, we define consistency loss as:

where Lmse is the mean squared error loss.

are hyperparameters that balance each term.

Lseg denotes the segmentation loss, and Lace is the ACE loss. More details about ACE loss can be found in [5].

We conduct our experiments on the Left Atrium (LA) dataset from Atrial Segmentation Challenge111http://atriaseg2018.cardiacatlas.org/. The dataset comprises of 100 3D gadolinium-enhanced MR imaging scans (GE-MRIs) with expert annotations, with an isotropic resolution of 0.625×0.625×0.625mm3. Following the experimental setting in [29]

, we use 80 scans for training, and 20 scans for evaluation. We employ the same pre-processing methods by cropping all the scans at the heart region and normalized as zero and unit variance.

denote the current and the maximum training step, respectively. For fairness, all evaluated methods are implemented in PyTorch, and trained for

3.0.3 Comparison with Other Semi-supervised Methods

We evaluate our CVRL with several state-of-the-art semi-supervised segmentation methods on different amounts of labeled data, including V-Net [18], DAP [32], UA-MT [29], LG-ER-MT [9], and SASSNet [15]. Table 1 compares our segmentation results with other methods.

We first conduct experiments under 20% annotation ratios (16 labeled and 64 unlabeled). Under this setting, most above approaches achieve superior segmentation performance. CVRL gives slightly better performance thanks to its global and local voxel-wise feature extraction. In particular, our proposed method can be further improved with NMS, outperforming other end-to-end semi-supervised methods in Dice (89.87%), Jaccard (81.65%), ASD (1.72), and 95HD (6.96).

To further evaluate the effectiveness of CVRL, we compare it with other methods in 10% annotation ratio (8 labeled and 72 unlabeled), as reported in Table 1. We observe consistent performance improvements over state-of-the-arts, in terms of Dice (87.41%), and Jaccard (77.80%). Meanwhile, the results in Table 1 suggest that with NMS, CVRL achieves consistent performance gains. This evidence that i). taking voxel samples with contrastive learning yields better voxel embeddings; ii) both global voxel-to-volume and local voxel-to-voxel relations are informative cues; iii) utilizing an active contour model is capable of helping identify more accurate boundaries. Leveraging all these aspects, it can observe consistent performance gains. As shown in Fig. 2, our method is capable of generating more accurate segmentation, considering the fact the improvement in such setting is difficult. This demonstrates i) the necessity of comprehensively considering both global voxel-to-volume contrast and local voxel-to-voxel contrast; and ii) efficacy of elastica (curvature and length) and region constraints.

We perform ablation experiments to validate the effectiveness of major components in our proposed method, including global contrastive strategy (global projection head), local contrastive strategy, and ACE loss. The quantitative results is reported in Table 2. We compare CVRL with its five variants under 10% annotation ratio (8 labeled and 72 unlabeled). Specially, the Baseline model refers to UA-MT-UN [29] without uncertainty measures. We gradually incorporate Lg, Ll, Lace, denoted as Baseline+Lg, Baseline+Ll, Baseline+Lace, Baseline+Lg+Ll, Baseline+Lg+Ll+Lace (CVRL), respectively. As shown in the table, the Baseline network achieve 83.09%, 71.75%, 5.53, 19.65 in terms of Dice, Jaccard, ASD, and 95HD. With the progressive introduction of Lg, Ll, Lace, our proposed algorithm enjoys consistently improvement gains over the Baseline network, boosting Dice and Jaccard by 4.32%, 6.05%, respectively. Also, the metrics ASD and 95HD are reduced by 2.22 and 6.25, respectively. This further validates the effectiveness of each key component.