Stochastic gradient methods (SGMs) have been extensively used for solving stochastic problems or large-scale machine learning problems. Recent works employ various techniques to improve the convergence rate of SGMs for both convex and nonconvex cases. Most of them require a large number of samples in some or all iterations of the improved SGMs. In this paper, we propose a new SGM, named PStorm, for solving nonconvex nonsmooth stochastic problems. With a momentum-based variance reduction technique, PStorm can achieve a near-optimal complexity result Õ(ε^-3) to produce a stochastic ε-stationary solution, if a mean-squared smoothness condition holds. Different from existing near-optimal methods, PStorm requires only one or O(1) samples in every update. With this property, PStorm can be applied to online learning problems that favor real-time decisions based on one or O(1) new observations. In addition, for large-scale machine learning problems, PStorm can generalize better by small-batch training than other near-optimal methods that require large-batch training and the vanilla SGM, as we demonstrate on training a sparse fully-connected neural network. 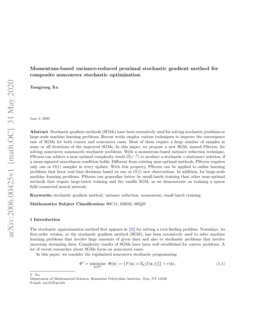 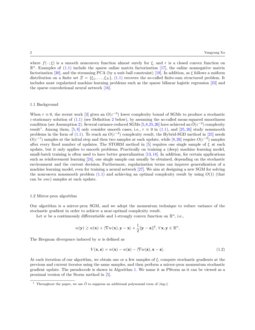 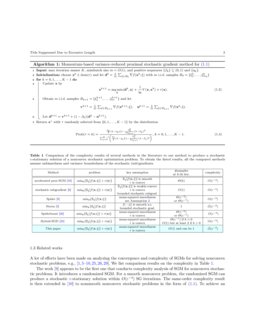 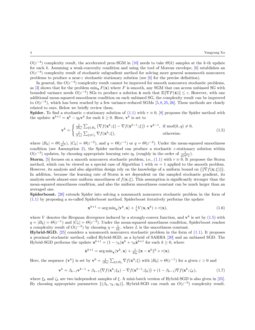 The stochastic approximation method first appears in robbins1951stochastic for solving a root-finding problem. Nowadays, its first-order version, or the stochastic gradient method (SGM), has been extensively used to solve machine learning problems that involve huge amounts of given data and also to stochastic problems that involve uncertain streaming data. Complexity results of SGMs have been well established for convex problems. A lot of recent researches about SGMs focus on nonconvex cases.

In this paper, we consider the regularized nonconvex stochastic programming

follows a uniform distribution on a finite set

) recovers the so-called finite-sum structured problem. It includes most regularized machine learning problems such as the sparse bilinear logistic regression

and the sparse convolutional neural network

When r≡0, the recent work arjevani2019lower gives an O(ε−3) lower complexity bound of SGMs to produce a stochastic ε-stationary solution of (1.1) (see Definition 2 below), by assuming the so-called mean-squared smoothness condition (see Assumption 2). Several variance-reduced SGMs tran2019hybrid ; wang2018spiderboost ; fang2018spider ; cutkosky2019momentum have achieved an ~O(ε−3) complexity result111Throughout the paper, we use ~O to suppress an additional polynomial term of |logε|. Among them, fang2018spider ; cutkosky2019momentum only consider smooth cases, i.e., r≡0 in (1.1), and tran2019hybrid ; wang2018spiderboost study nonsmooth problems in the form of (1.1). To reach an O(ε−3) complexity result, the Hybrid-SGD method in tran2019hybrid needs O(ε−1) samples at the initial step and then two samples at each update, while wang2018spiderboost ; fang2018spider require O(ε−2) samples after every fixed number of updates. The STORM method in cutkosky2019momentum requires one single sample of ξ at each update, but it only applies to smooth problems. Practically on training a (deep) machine learning model, small-batch training is often used to have better generalization masters2018revisiting ; keskar2016large

. In addition, for certain applications such as reinforcement learning

sutton2018reinforcement , one single sample can usually be obtained, depending on the stochastic environment and the current decision. Furthermore, regularization terms can improve generalization of a machine learning model, even for training a neural network wei2019regularization . We aim at designing a new SGM for solving the nonconvex nonsmooth problem (1.1) and achieving an optimal complexity result by using O(1) (that can be one) samples at each update.

Our algorithm is a mirror-prox SGM, and we adopt the momentum technique to reduce variance of the stochastic gradient in order to achieve a near-optimal complexity result.

Let w be a continuously differentiable and 1-strongly convex function on Rn, i.e.,

The Bregman divergence induced by w is defined as

At each iteration of our algorithm, we obtain one or a few samples of ξ, compute stochastic gradients at the previous and current iterates using the same samples, and then perform a mirror-prox momentum stochastic gradient update. The pseudocode is shown in Algorithm 1. We name it as PStorm as it can be viewed as a proximal version of the Storm method in cutkosky2019momentum .

In general, the O(ε−4) complexity result cannot be improved for smooth nonconvex stochastic problems, as arjevani2019lower shows that for the problem minxF(x) where F is smooth, any SGM that can access unbiased SG with bounded variance needs Ω(ε−4) SGs to produce a solution ¯x such that E∥∇F(¯x)∥≤ε. However, with one additional mean-squared smoothness condition on each unbiased SG, the complexity result can be improved to O(ε−3), which has been reached by a few variance-reduced SGMs tran2019hybrid ; wang2018spiderboost ; fang2018spider ; cutkosky2019momentum . These methods are closely related to ours. Below we briefly review them.

Spider. To find a stochastic ε-stationary solution of (1.1) with r≡0, fang2018spider proposes the Spider method with the update: xk+1=xk−ηkvk for each k≥0. Here, vk is set to

Storm. cutkosky2019momentum focuses on a smooth nonconvex stochastic problem, i.e., (1.1) with r≡0. It proposes the Storm method, which can be viewed as a special case of Algorithm 1 with m=1 applied to the smooth problem. However, its analysis and also algorithm design rely on the knowledge of a uniform bound on {∥∇f(x;ξ)∥}. In addition, because the learning rate of Storm is set dependent on the sampled stochastic gradient, its analysis needs almost-sure uniform smoothness of f(x;ξ). This assumption is significantly stronger than the mean-squared smoothness condition, and also the uniform smoothness constant can be much larger than an averaged one.

Spiderboost. wang2018spiderboost extends Spider into solving a nonsmooth nonconvex stochastic problem in the form of (1.1) by proposing a so-called Spiderboost method. Spiderboost iteratively performs the update

where V denotes the Bregman divergence induced by a strongly-convex function, and vk is set by (1.5) with q=|Bk|=Θ(ε−1) and |Ck|=Θ(ε−2). Under the mean-squared smoothness condition, Spiderboost reaches a complexity result of O(ε−3) by choosing η=12L, where L is the smoothness constant.

Hybrid-SGD. tran2019hybrid considers a nonsmooth nonconvex stochastic problem in the form of (1.1). It proposes a proximal stochastic method, called Hybrid-SGD, as a hybrid of SARHA nguyen2017sarah and an unbiased SGD. The Hybrid-SGD performs the update xk+1=(1−γk)xk+γk^xk+1 for each k≥0, where

where ξk and ζk are two independent samples of ξ. A mini-batch version of Hybrid-SGD is also given in tran2019hybrid . By choosing appropriate parameters {(βk,γk,ηk)}, Hybrid-SGD can reach an O(ε−3) complexity result. Although the update of vk requires only two or O(1) samples, its initial setting needs O(ε−1) samples. As explained in (tran2019hybrid, , Remark 4.1), if the initial minibatch size is |B0|=O(1), then the complexity result of Hybrid-SGD will be worsened to O(ε−4).

More. There are many other works analyzing complexity results of SGMs on solving nonconvex finite-sum structured problems, e.g., allen2016variance ; reddi2016stochastic ; lei2017non ; huo2016asynchronous . These results often emphasize the dependence on the number of component functions and also the target error tolerance ε. In addition, several works have analyzed adaptive SGMs for nonconvex finite-sum or stochastic problems, e.g., chen2018convergence ; zhou2018convergence ; xu2020-APAM . An exhaustive review of all these works is impossible and also beyond the scope of this paper. We refer interested readers to those papers and the references therein.

Our main contributions are about the algorithm design and analysis. We design a momentum-based variance-reduced mirror-prox stochastic gradient method for solving nonconvex nonsmooth stochastic problems. The proposed method generalizes Storm in cutkosky2019momentum from smooth cases to nonsmooth cases, and in addition, it achieves the same near-optimal complexity result ~O(ε−3) under a mean-squared smooth condition, which is weaker than the almost-sure uniform smoothness condition assumed in cutkosky2019momentum . While Spiderboost wang2018spiderboost and Hybrid-SGD tran2019hybrid can also achieve an ~O(ε−3) complexity result for stochastic nonconvex nonsmooth problems, they need O(ε−1) or O(ε−2) data samples in some or all iterations. Our new method is the first one that requires only one or O(1)

samples per iteration, and thus it can be applied to online learning problems that need real-time decision based on possibly one or several new data samples. Furthermore, the proposed method only needs an estimate of the smoothness parameter and is easy to tune to have good performance. Empirically, we observe that it converges faster than a vanilla SGD and performs more stable than Spiderboost and Hybrid-SGD on training sparse neural networks.

We use bold lowercase letters x,y,g,…

EBk denotes the expectation about a mini-batch set Bk conditionally on the all previous history, and E denotes the full expectation. |Bk| counts the number of elements in the set Bk. We use ∥⋅∥ for the Euclidean norm. A differentiable function F is called L-smooth, if for all x and y.

By the proximal gradient mapping, if a point ¯x∈dom(r) is an optimal solution of (1.1), then it must satisfy P(¯x,∇F(¯x),η)=0 for any η>0. Based on this observation, we define a near-stationary solution as follows. This definition is standard and has been adopted in other papers, e.g., wang2018spiderboost .

In addition, the proximal gradient mapping is nonexpansive from (ghadimi2016mini, , Proposition 1), i.e.,

Notice that ∥¯gk∥ measures the violation of stationarity of xk. The gradient error is represented by

Outline. The rest of the paper is organized as follows. In section 2, we establish the complexity result of Algorithm 1. Numerical experiments are conducted in section 3, and we conclude the paper in section 4.

In this section, we analyze the complexity result of Algorithm 1. Our analysis is inspired from that in cutkosky2019momentum and wang2018spiderboost . Throughout our analysis, we make the following assumptions.

The optimal objective value Φ∗ of (1.1) is finite.

We first show a few lemmas. The lemma below estimates one-iteration progress. Its proof follows from wang2018spiderboost .

Let {xk} be generated from Algorithm 1. Then

Plugging the above inequality into (2.3) and rearranging terms give

By the Cauchy-Schwartz inequality, it holds ηk⟨ek,gk⟩≤ηk2∥ek∥2+ηk2∥gk∥2, which together with the above inequality implies

Now plug the above inequality into (2.4) to give the desired result.

The next lemma gives a recursive bound on the gradient error vector sequence {ek}. Its proof follows that of (cutkosky2019momentum, , Lemma 2).

By the Young’s inequality, it holds

From Assumption 3, we have

Hence, taking conditional expectation on both sides of (2.8) and substituting it into (2.7) yield

Now taking a full expectation over the above inequality and using Assumptions 2 and 3, we have

By similar arguments as those in (2.5), it holds

Now notice xk+1−xk=−ηkgk and plug the above inequality into (2.11) to obtain the desired result.

Using Lemmas 1 and 2, we first show a convergence rate result by choosing the parameters that satisfy a general condition. Then we specify the choice of the parameters.

Under Assumptions 1 through 3, let {xk} be the iterate sequence from Algorithm 1, with the parameters {ηk} and {βk} satisfying the condition:

From Lemmas 1 and 2, it follows that

We have from the condition of {βk} that the coefficient of the term ∥ek∥2 on the right hand side of (2) is nonpositive, and thus we obtain from (2) that

Now we specify the choice of parameters and establish a complexity result of Algorithm 1.

Under Assumptions 1 through 3, let {xk} be the iterate sequence from Algorithm 1, with the parameters {ηk} and {βk} set to

where η≤3√48L is a positive number. Then