The goal of this paper is to obtain expectation bounds for the deviation of large sample autocovariance matrices from their means under weak data dependence. While the accuracy of covariance matrix estimation corresponding to independent data has been well understood, much less is known in the case of dependent data. We make a step towards filling this gap, and establish deviation bounds that depend only on the parameters controlling the "intrinsic dimension" of the data up to some logarithmic terms. Our results have immediate impacts on high dimensional time series analysis, and we apply them to high dimensional linear VAR(d) model, vector-valued ARCH model, and a model used in Banna et al. (2016). 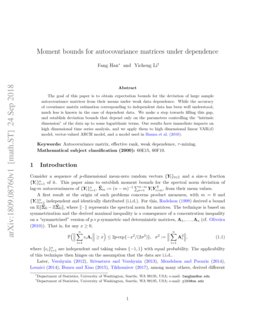 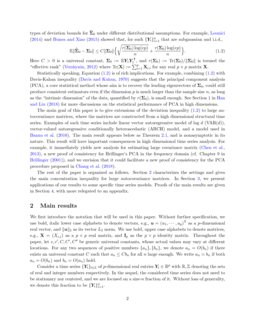 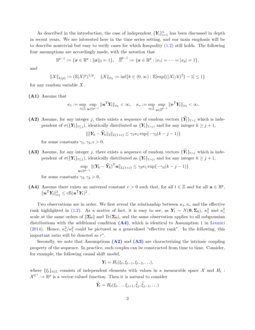 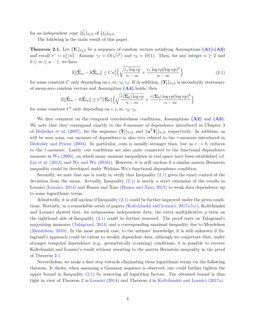 We consider the deviation inequalities for the sums of independent d by ...
Nikita Zhivotovskiy, et al. ∙

Eigenvalue distribution of a high-dimensional distance covariance matrix with application

A first result at the origin of such problems concerns product measures, with m=0 and {\bYi}ni=1 independent and identically distributed (i.i.d.). For this, Rudelson (1999) derived a bound on E\vvvert^\bSigma0−E^\bSigma0\vvvert, where \vvvert⋅\vvvert represents the spectral norm for matrices. The technique is based on symmetrization and the derived maximal inequality is a consequence of a concentration inequality on a “symmetrized” version of p×p symmetric and deterministic matrices, \Ab1,…,\Abn (cf. Oliveira (2010)). That is, for any x≥0,

with equal probability. The applicability of this technique then hinges on the assumption that the data are i.i.d..

Statistically speaking, Equation (1.2) is of rich implications. For example, combining (1.2) with Davis-Kahan inequality (Davis and Kahan, 1970)

suggests that the principal component analysis (PCA), a core statistical method whose aim is to recover the leading eigenvectors of

\bSigma0, could still produce consistent estimators even if the dimension p is much larger than the sample size n, as long as the “intrinsic dimension” of the data, quantified by r(\bSigma0), is small enough. See Section 1 in Han and Liu (2018) for more discussions on the statistical performance of PCA in high dimensions.

The main goal of this paper is to give extensions of the deviation inequality (1.2

) to large autocovariance matrices, where the matrices are constructed from a high dimensional structural time series. Examples of such time series include linear vector autoregressive model of lag

Banna et al. (2016). The main result appears below as Theorem 2, and is nonasymptotic in its nature. This result will have important consequences in high dimensional time series analysis. For example, it immediately yields new analysis for estimating large covariance matrix (Chen et al., 2013), a new proof of consistency for Brillinger’s PCA in the frequency domain (cf. Chapter 9 in Brillinger (2001)), and we envision that it could facilitate a new proof of consistency for the PCA procedure proposed in Chang et al. (2018).

The rest of the paper is organized as follows. Section 2 characterizes the settings and gives the main concentration inequality for large autocovariance matrices. In Section 3, we present applications of our results to some specific time series models. Proofs of the main results are given in Section 4, with more relegated to an appendix.

We first introduce the notation that will be used in this paper. Without further specification, we use bold, italic lower case alphabets to denote vectors, e.g., \bu=(u1,⋯,up)T as a p-dimensional real vector, and \vvvert\bu\vvvert2 as its vector L2 norm. We use bold, upper case alphabets to denote matrices, e.g., \Xb=(Xi,j) as a p×p real matrix, and \Ibp as the p×pidentity matrix. Throughout the paper, let c,c′,C,C′,C′′ be generic universal constants, whose actual values may vary at different locations. For any two sequences of positive numbers {an},{bn}, we denote an=O(bn) if there exists an universal constant C such that an≤Cbn for all n large enough. We write an≍bn if both an=O(bn) and bn=O(an) hold.

Consider a time series {\bYt}t∈Z of p-dimensional real entries \bYt∈Rp with R,Z denoting the sets of real and integer numbers respectively. In the sequel, the considered time series does not need to be stationary nor centered, and we are focused on a size-n fraction of it. Without loss of generality, we denote this fraction to be {\bYi}ni=1.

As described in the introduction, the case of independent {\bYi}ni=1 has been discussed in depth in recent years. We are interested here in the time series setting, and our main emphasis will be to describe nontrivial but easy to verify cases for which Inequality (1.2) still holds. The following four assumptions are accordingly made, with the notation that

for any random variable

Two observations are in order. We first reveal the relationship between κ1,κ∗ and the effective rank highlighted in (1.2). As a matter of fact, it is easy to see, as \bYt∼N(\zero,\bSigma0), κ21 and κ2∗ scale at the same orders of \vvvert\bSigma0\vvvert and Tr(\bSigma0), and the same observation applies to all subgaussian distributions with the additional condition 4, which is identical to Assumption 1 in Lounici (2014). Hence, κ2∗/κ21 could be pictured as a generalized “effective rank”. In the following, this important ratio will be denoted as r∗.

Secondly, we note that Assumptions 2 and 3 are characterizing the intrinsic coupling property of the sequence. In practice, such couples can be constructed from time to time. Consider, for example, the following causal shift model,

where {ξt}t∈Z consists of independent elements with values in a measurable space \cX and Ht:\cXZ+→Rp is a vector-valued function. Then it is natural to consider

The following is the main result of this paper.

for some constant C only depending on ϵ,m,γ2,γ4. If in addition, {\bYt}t∈Z is secondarily stationary of mean-zero random vectors and Assumption 4 holds, then

for some constant C′ only depending on ϵ,c,m,γ2,γ4.

We first comment on the temporal correlatedness conditions, Assumptions 2 and 3. We note that they correspond exactly to the δ-measure of dependence introduced in Chapter 3 of Dedecker et al. (2007), for the sequence {\bYt}t∈Z and {\buT\bYt}t∈Z respectively. In addition, as will be seen soon, our measure of dependence is also very related to the τ-measure introduced in Dedecker and Prieur (2004). In particular, ours is usually stronger than, but as ϵ→0, reduces to the τ-measure. Lastly, our conditions are also quite connected to the functional dependence measure in Wu (2005), on which many moment inequalities in real space have been established (cf. Liu et al. (2013) and Wu and Wu (2016)). However, it is still unclear if a similar matrix Bernstein inequality could be developed under Weibiao Wu’s functional dependence condition.

Secondly, we note that one is ready to verify that Inequality (2.1) gives the exact control of the deviation from the mean. Actually, Inequality (2.1) is nearly a strict extension of the results in Lounici (Lounici, 2014) and Bunea and Xiao (Bunea and Xiao, 2015) to weak data dependence up to some logarithmic terms.

Admittedly, it is still unclear if Inequality (2.1) could be further improved under the given conditions. Recently, in a remarkable series of papers (Koltchinskii and Lounici, 2017a, b, c), Koltchinskii and Lounici showed that, for subgaussian independent data, the extra multiplicative p term on the righthand side of Inequality (2.1) could be further removed. The proof rests on Talagrand’s majorizing measures (Talagrand, 2014) and a corresponding maximal inequality due to Mendelson (Mendelson, 2010). In the most general case, to the authors’ knowledge, it is still unknown if Talagrand’s approach could be extent to weakly dependent data, although we conjecture that, under stronger temporal dependence (e.g., geometrically ϕ-mixing) conditions, it is possible to recover Koltchinskii and Lounici’s result without resorting to the matrix Bernstein inequality in the proof of Theorem 2.

Nevertheless, we make a first step towards eliminating these logarithmic terms via the following theorem. It shows, when assuming a Gaussian sequence is observed, one could further tighten the upper bound in Inequality (2.1) by removing all logarithm factors. The obtained bound is thus tight in view of Theorem 2 in Lounici (2014) and Theorem 4 in Koltchinskii and Lounici (2017a).

for some constant C>0 only depending on ϵ,m,γ2,γ4.

In a related track of studies, Bai and Yin (1993), Srivastava and Vershynin (2013), Mendelson and Paouris (2014), and Tikhomirov (2017), among many others, explored the optimal scaling requirement in approximating a large covariance matrix for heavy-tailed data. For instance, for i.i.d. data and as \bSigma0 is identity, Bai and Yin (Bai and Yin, 1993) showed that \vvvert^\bSigma0−\bSigma0\vvvert will converge to zero in probability as long as p/n→0 and 4-th moments exist. Some recent developments further strengthen the moment requirement. These results cannot be compared to ours. In particular, our analysis is focused on characterizing the role of “effective rank”, a term of strong meanings in statistical implications and a feature that cannot be captured using these alternative procedures.

In this section, we examine the validity of Assumptions 1-4 in Section 2 under three models, a stable VAR(d) model, a model proposed by Banna et al. (2016), and an ARCH-type model.

We first consider such {\bYt}t∈Z that is a random sequence generated from VAR(d) model, i.e.,

Under these conditions, we have the following theorem. The above {\bYt}t∈Z satisfies Assumptions 1-4 with

We secondly consider the following time series generation scheme whose corresponding matrix version has been considered by Banna, Merlevède, and Youssef (Banna et al., 2016). In detail, let {\bYt}t∈Z be a random sequence generated by

The above {\bYt}t∈Z satisfies Assumptions 1-4 with

for some constants C,C′>0 only depending on ϵ.

Lastly, we consider an vector-valued ARCH-model with {\bYt}t∈Z being a random sequence generated by

where H:Rp→Rp×p is a matrix-valued function and {\bEt}t∈Z is a sequence of independent random vectors such that

for some constants 0<κ′1,κ′∗<∞. Assume further that \vvvert\Ab\vvvert≤a1 and the function H(⋅) satisfies

for some constants C,C′>0 only depending on ϵ. If we further assume the above {\bYt}t∈Z to be a stationary sequence and sup\bu∈Rp\vvvertH(\bu)\vvvert<D2 for some universal constant D2<∞, then {\bYt}t∈Z satisfies Assumption 1.

The proof depends mainly on the following tail probability bound of deviation of the sample covariance from its mean.

for some constants C,C′>0 only depending on ϵ.

Notice that under Assumptions 1, 4, zero-mean, and stationarity, we have κ21≍\vvvertΣ0\vvvert and κ2∗≍Tr(Σ0). Thus plugging in Theorem 2 finishes the proof. ∎

Now we prove Proposition 4.1 under Assumptions 1-3. In the proof, the cases for covariance and autocovariance matrices are treated separately. In addition, the proof depends on a Berstein-type inequality for τ-mixing random matrices and some related lemmas, whose proofs are presented later.

Given a sequence of random vectors {\bYt}t∈Z, denote \Xbt:=\bYt\bYTt for all t∈Z. Then for any constant M>0, we introduce the following “truncated” version of \Xbt:

where a∧b:=min(a,b) for any two real numbers a,b.

For any integer m>0, we denote \Zb(m)t:=\bYt\bYTt+m for all t∈Z. For the sake of clarification, the superscript “(m)” is dropped when no confusion is possible. Then the truncated version is

We further define the “variances” for

denote the largest and smallest eigenvalues of

Case I: When m=0, {\Xbt}t∈Z is a sequence of symmetric random matrices. We have,

We first show that the difference in expectation between the “truncated” \XbMδt and original one \Xbt can be controlled with the chosen truncation level Mδ. For this, we need the following lemma.

Let {\bYt}t∈Z be a sequence of p-dimensional random vectors under Assumption 1. Then for all t∈Z and for all x≥0,

for some arbitary constant C>0.

where the last line followed by Assumption 1, Lemma 4.1, and the chosen Mδ.

in which the random matrix sequence is assumed to be

β-mixing. Its proof is relegated to the Appendix.

Consider a sequence of real, mean-zero, symmetric p×p random matrices {\Xbt}t∈Z with ∥\Xbt∥≤M for some positive constant M. In addition, assume that this sequence is τ-mixing (see, Appendix Section A.1 for a detailed introduction to the τ-mixing coefficient) with geometric decay, i.e.,

In order to apply Theorem 4.1, we need the following two lemmas. Lemma 4.1 is to show that the sequence of “truncated” matrices {\XbMt} under Assumptions 1-2 is a τ-mixing random sequence with geometric decay. Lemma 4.1 calculates the upper bound for ν2 term in Theorem 4.1 for {\XbMt}t∈Z.