Machine learning is often used in virtual screening to find compounds that are pharmacologically active on a target protein. The weave module is a type of graph convolutional deep neural network that uses not only features focusing on atoms alone (atom features) but also features focusing on atom pairs (pair features); thus, it can consider information of nonadjacent atoms. However, the correlation between the distance on the graph and the three-dimensional coordinate distance is uncertain. In this paper, we propose three improvements for modifying the weave module. First, the distances between ring atoms on the graph were modified to bring the distances on the graph closer to the coordinate distance. Second, different weight matrices were used depending on the distance on the graph in the convolution layers of the pair features. Finally, a weighted sum, by distance, was used when converting pair features to atom features. The experimental results show that the performance of the proposed method is slightly better than that of the weave module, and the improvement in the distance representation might be useful for compound activity prediction. 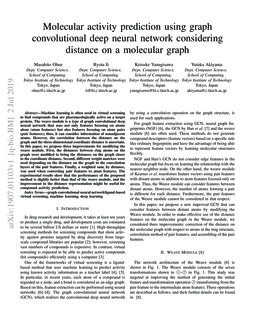 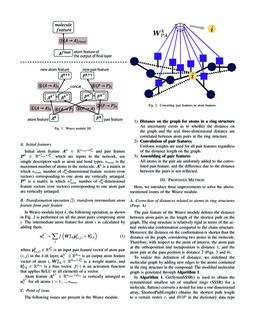 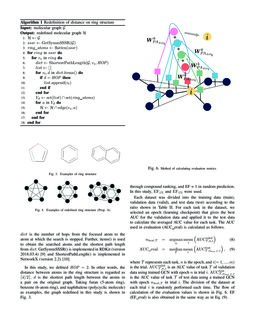 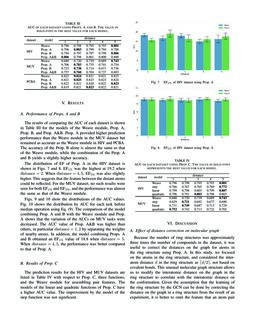 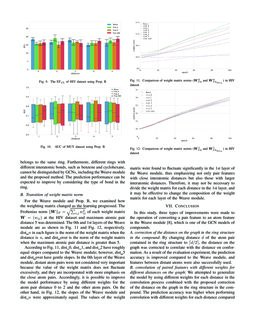 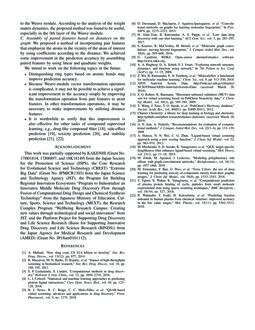 In drug research and development, it takes at least ten years to produce a single drug, and development costs are estimated to be several billion US dollars or more

[2]. High-throughput screening methods for screening compounds that show activity against proteins targeted by drug discovery from large-scale compound libraries are popular [3]; however, screening vast numbers of compounds is expensive. In contrast, virtual screening is expected to be able to predict active compounds (hit compounds) efficiently using a computer [4].

One of the frameworks of virtual screening is a ligand-based method that uses machine learning to predict activity using known activity information as a teacher label [5, 6]

. In particular, in recent years, each atom of a compound is regarded as a node, and a bond is considered as an edge graph. Based on this, feature extraction can be performed using neural networks

are often used. These methods do not generate compound descriptors (feature vectors) based on a specific rule like ordinary fingerprints and have the advantage of being able to represent feature vectors by learning molecular structures flexibly.

NGF and Han’s GCN do not consider edge features in the molecular graph but focus on learning the relationship with the nearest neighbor node. On the other hand, the weave module of Kearnes et al. transforms feature vectors using pair features with distant atoms in addition to atom features focused only on atoms. Thus, the Weave module can consider features between distant atoms. However, the number of atoms forming a pair is different for each distance. Furthermore, the pair features of the Weave module cannot be considered in that respect.

In this paper, we propose a new improved GCN that can consider features between distant atoms by modifying the Weave module. In order to make effective use of the distance features on the molecular graph in the Weave module, we considered three improvements: correction of the distance on the molecular graph with respect to atoms in the ring structure, convolution method of pair features, and assembling of the pair features.

The network architecture of the Weave module [9] is shown in Fig. 1. The Weave module consists of the seven transformations shown in 1⃝–7⃝ in Fig. 1. This study was targeted at improving the method of generating the initial feature and transformation operation 3⃝ (transforming from the pair feature to the intermediate atom feature). These operations are described as follows, and their further details can be found in  [9].

In Weave-module layer k, the following operation, as shown in Fig. 2 is performed on all the atom pairs comprising atom i. The intermediate atom feature for atom i is calculated by adding them.

is a bias vector.

is an activation function that applies ReLU to all elements of a vector.

The following issues are present in the Weave module.

Here, we introduce three improvements to solve the above-mentioned issues of the Weave module.

Iii-a Correction of distances related to atoms in ring structures (Prop. A)

The pair feature of the Weave module defines the distance between atom pairs as the length of the shortest path on the graph. The ring structure is relatively rigid in terms of the actual molecular conformation compared to the chain structure. Moreover, the distance on the conformation is shorter than the distance on the graph, considering two atoms in the molecule. Therefore, with respect to the atom of interest, the atom pair at the orthoposition and metaposition is distance 1, and the atom pair at the para position is distance 2 (Figs. 4 and 4).

To realize this definition of distance, we redefined the molecular graph by adding new edges to the atoms contained in the ring structure in the compound. The modified molecular graph is generated through Algorithm 1.

In Algorithm 1, GetSymmSSSR() is used to obtain the symmetrized smallest set of smallest rings (SSSR) for a molecule, flatten() converts a nested list into a one-dimensional array, ShortestPathLength() obtains the shortest path length to a certain vertex r, and HOP in the dictionary data type dict is the number of hops from the focused atom to the atom at which the search is stopped. Further, items() is used to obtain the searched atoms and the shortest path length from dict. GetSymmSSSR() is implemented in RDKit (version 2018.03.4) [10] and ShortestPathLength() is implemented in NetworkX (version 2.2) [11].

In this study, we defined HOP=2. In other words, the distance between atoms in the ring structure is regarded as ⌈d/2⌉. d is the shortest path length between the atoms in a pair on the original graph. Taking furan (5-atom ring), benzene (6-atom ring), and naphthalene (polycyclic molecule) as examples, the graph redefined in this study is shown in Fig. 4.

Iii-B Convolution of pair features with different weights (Prop. B)

We improved the weights for pair features to be determined by learning the use of neural networks. In the Weave module, pair features were convoluted using the same weight matrix, regardless of the distance length. Therefore, we labeled distances dist0,dist1,...,distn,...,distmax,dist∞ from the focus atom to distinguish each pair feature. Here, dist∞ represents all distances greater than the maximum atomic pair distance distmax. We used different weight matrices corresponding to these distances in the convolution of pair features.

In Prop. B, weight matrices according to the distance were used for atom pairs and convolution was performed. The intermediate atom feature of atom i was calculated by taking the sum of atom pairs of atom i. This operation is shown in Fig. 5.

. The hyperparameters of GCN are listed in Table

II. These were the same as those used by Kearnes et al. [9]. We attempted to set maximum atom pair distance, distmax, to 1–5.

In this study, the prediction performance of the model was evaluated using the ROC curve [17] and area under the curve (AUC), as shown in Eq. (6), as well as the enrichment factor (EF) [18]

in Eq. (7) using the compound order arranged in descending order of prediction probability.

The AUC is 0.5 and 1.0 for random and complete predictions, respectively. EFx% is a value indicating how many times the active compound can be concentrated to the top x% through compound ranking, and EF = 1 in random prediction. In this study, EF1% and EF1% were used.

Each dataset was divided into the training data (train), validation data (valid), and test data (test) according to the ratio shown in Table II. For each task in the dataset, we selected an epoch (learning checkpoint) that gives the best AUC for the validation data and applied it to the test data to calculate the averaged AUC value for each task. The AUC used in evaluation (AUC_eval) is calculated as follows.

where T represents each task, n is the epoch, and i(=1,...,m) is the trial. AUCvalidT,n,i is an AUC value of task T of validation data using trained GCN with epoch n in trial i. AUCtestT,nbest,T,i is the AUC value of task T of test data using a trained GCN with epoch nbest,T in trial i. The division of the dataset at each trial i is randomly performed each time. EF (EF_eval) is also obtained in the same way as in Eq. (9).

V-a Performance of Props. A and B

The distribution of EF of Prop. A in the HIV dataset is shown in Figs. 7 and 7. EF1% was the highest at 19.2 when distance=2. When distance=4,5, EF5% was also slightly higher. This suggests that the feature between the distant atoms could be reflected. For the MUV dataset, no such results were seen for both EF1% and EF5%, and the performance was almost the same as that of the Weave module.

Figs. 9 and 9 show the distributions of the AUC values. Fig. 9 shows the distribution by AUC for each task before median operation using Eq. (9). The comparison of the model combining Prop. A and B with the Weave module and Prop. A shows that the variation of the AUCs on MUV tasks were decreased. The AUC value of Prop. A&B was higher than others, in particular distance=1,2 by separating the weights of nearby atoms. In addition, the model combining Props. A and B obtained an EF1% value of 18.8 when distance=5. When distance=4,5, the performance was better compared to that of Prop. A.

The prediction results for the HIV and MUV datasets are listed in Table IV with respect to Prop. C, three functions, and the Weave module for assembling pair features. The models of the linear and quadratic functions of Prop. C have a higher AUC value. The improvement by the model of the step function was not significant.

We intend to work on the following topics in the future: