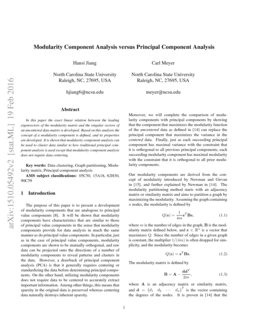 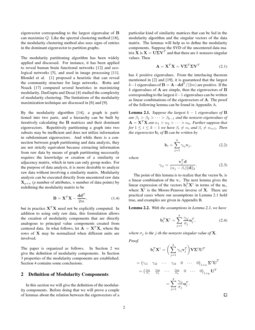 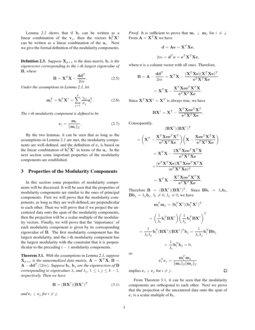 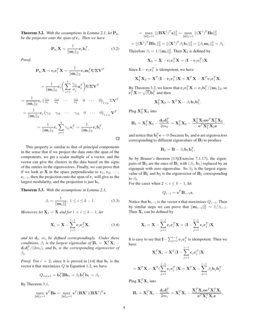 can replace the principal component that maximizes the variance in the

The modularity matrix is defined by

where A is an adjacency matrix or similarity matrix, and d=(d1d2⋯dn)T is the vector containing the degrees of the nodes. It is proven in [14]

that the eigenvector corresponding to the largest eigenvalue of

B can maximize Q

[18], the modularity clustering method also uses signs of entries in the dominant eigenvector to partition graphs. The modularity partitioning algorithm has been widely applied and discussed. For instance, it has been applied to reveal human brain functional networks [12] and ecological networks [5], and used in image processing [11]. Blondel et al. [1]

proposed a heuristic that can reveal the community structure for large networks. Rotta and Noack

[17] compared several heuristics in maximizing modularity. DasGupta and Desai [4] studied the complexity of modularity clustering. The limitations of the modularity maximization technique are discussed in [6] and [9]. By the modularity algorithm [14], a graph is partitioned into two parts, and a hierarchy can be built by iteratively calculating the B matrices and their dominant eigenvectors. Repetitively partitioning a graph into two subsets may be inefficient and does not utilize information in subdominant eigenvectors. And while there is a connection between graph partitioning and data analysis, they are not strictly equivalent because extracting information from raw data by means of graph partitioning necessarily requires the knowledge or creation of a similarity or adjacency matrix, which in turn can only group nodes. For the purpose of data analysis, it is more desirable to analyze raw data without involving a similarity matrix. Modularity analysis can be executed directly from uncentered raw data Xp×n (p number of attributes, n number of data points) by redefining the modularity matrix to be

Suppose the largest k−1 eigenvalues of B are β1>β2>⋯>βk−1 and the nonzero eigenvalues of A=XTX are α1>α2>⋯>αk. Further suppose that for 1≤i≤k−1 we have βi≠αi and βi≠αi+1. Then the eigenvector bi of B can be written by

The point of this lemma is to realize that the vector bi is a linear combination of the vi. The next lemma gives the linear expression of the vectors bTiX† in terms of the ui, where X† is the Moore-Penrose inverse of X. There are practical cases where our assumptions in Lemma 2.1 hold true, and examples are given in Appendix B.

With the assumptions in Lemma 2.1, we have

where σj is the j-th the nonzero singular value of X.

Suppose Xp×n is the data matrix, bi is the eigenvector corresponding to the i-th largest eigenvalue of B, where

Under the assumptions in Lemma 2.1, let

The i-th modularity component is defined to be

3 Properties of the Modularity Components

With the assumptions in Lemma 2.1, suppose Xp×n is the unnormalized data matrix, A=XTX, B=A−ddT/(2m). Suppose bi, bj are the eigenvectors of B corresponding to eigenvalues λi and λj, 1≤i,j≤k−1, respectively. Then we have

It is sufficient to prove that mi⊥mj for i≠j. From A=XTX we have

where e is a column vector with all ones. Therefore,

Since XTXX†=XT is always true, we have

From Theorem 3.1, it can be seen that the modularity components are orthogonal to each other. Next we prove that the projection of the uncentered data onto the span of ci is a scalar multiple of bi.

With the assumptions in Lemma 2.1, let Pci be the projector onto the span of ci. Then we have

This property is similar to that of principal components in the sense that if we project the data onto the span of the components, we get a scalar multiple of a vector, and the vector can give the clusters in the data based on the signs of the entries in the eigenvectors. Finally, we can prove that if we look at X in the space perpendicular to c1, c2, ⋯, ci−1, then the projection onto the span of ci will give us the largest modularity, and the projection is just bi.

With the assumptions in Lemma 2.1,

and let di, mi be defined correspondingly. Under these conditions, βi is the largest eigenvalue of Bi=XTiXi−didTi/(2mi), and bi is the corresponding eigenvector of βi.

Therefore βi=1/∥mi∥22. Then X2 is defined by

Since I−c1cT1 is idempotent, we have

Notice that bi−1 is the vector s that maximizes Qi−1. Then by similar steps we can prove that ∥mi−1∥22=1/βi−1. Then Xi can be defined by

It is easy to see that I−∑i−1j=1cjcTj is idempotent. Then we have

So by Brauer’s theorem again, the eigenpairs of Bi are the ones of Bi−1 with (βi−1,bi−1) replaced by an eigenpair with zero eigenvalue. So βi is the largest eigenvalue of Bi and bi is the eigenvector of Bi corresponding to βi. ∎

Appendix A Proof of Lemma 2.1

The lemma is based on a theorem from [2] about the interlacing property of a diagonal matrix and its rank-one modification and how to calculate the eigenvectors of a diagonal plus rank one (DPR1) matrix [13]. The theorem can also be found in [19].

With the notations in Theorem A.1, the eigenvector of C corresponding to the eigenvalue ~di is given by (D−~diI)−1v.

where y=VTd/∥VTd∥2 and ρ=−∥VTd∥22/(2m). Since ΣA+ρyyT is also symmetric, it is orthogonally similar to a diagonal matrix. So we have

where U′ is orthogonal and ΣB is diagonal. Since ΣA+ρyyT is a DPR1 matrix, ρ<0 and ∥y∥2=1, the interlacing theorem applies to the eigenvalues of A and B. More specifically, we have

and hence the eigenvector of B corresponding to βi, 1≤i≤k−1 is given by

Since d=Ae=VΣAVTe where e is a column vector with all ones, we have

Appendix B Examples satisfy the assumptions in Lemma 2.1

We used two subsets of the popular MNIST data set from the literature, and the data set is described below.