Hard thresholding pursuit (HTP) is a recently proposed iterative sparse recovery algorithm which is a result of combination of a support selection step from iterated hard thresholding (IHT) and an estimation step from the orthogonal matching pursuit (OMP). HTP has been seen to enjoy improved recovery guarantee along with enhanced speed of convergence. Much of the success of HTP can be attributed to its improved support selection capability due to the support selection step from IHT. In this paper, we propose a generalized HTP algorithm, called regularized HTP (RHTP), where the support selection step of HTP is replaced by a IHT-type support selection where the cost function is replaced by a regularized cost function, while the estimation step continues to use the least squares function. With decomposable regularizer, satisfying certain regularity conditions, the RHTP algorithm is shown to produce a sequence dynamically equivalent to a sequence evolving according to a HTP-like evolution, where the identification stage has a gradient premultiplied with a time-varying diagonal matrix. RHTP is also proven, both theoretically, and numerically, to enjoy faster convergence vis-a-vis HTP with both noiseless and noisy measurement vectors. 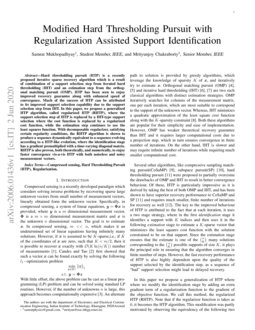 Compressed sensing is a recently developed paradigm which considers solving inverse problems by recovering sparse large unknwon vectors from small number of measurement vectors, linearly obtained form the unknown vector. Specifically, in compressed sensing, a system of linear equations, y=Φx is provided, where y is a m dimensional measurement vector, Φ is a m×m dimensional measurement matrix and x is the unknown n dimensional vector. The goal is to estimate x. In compressed sensing, m<<n, which makes it an undetermined set of linear equations having infinitely many solutions. However, if x is assumed to be K-sparse,i.e., if K of the coordinates of x are zero, such that K<m/2, then it is possible to recover x exactly with O(Kln(n/K)) number of measurements [1]. Candes and Tao [2] first showed that such a vector x can be found exactly by solving the following l1−optimization problem

With little effort, the above problem can be cast as a linear programming (LP) problem and can be solved using standard LP routines. However, if the number of unknowns

n is large, this approach becomes computationally expensive [3]. An alternate path to solution is provided by greedy algorithms, which leverage the knowledge of sparsity K of x, and iteratively try to estimate x. Orthogonal matching pursuit (OMP) [4, 5] and iterative hard thresholding (IHT) [6, 7] are two such classical algorithms with distinct estimation strategies. OMP iteratively searches for columns of the measurement matrix, one per each iteration, which are most suitable to correspond to the support of the unknown vector. Whereas, IHT minimizes a quadratic approximation of the least square cost function along with the K-sparsity constraint [8]. Both these algorithms are popular for their simplicity and ease of implementation. However, OMP has weaker theoretical recovery guarantee than IHT and it requires larger computational costs due to a projection step, which in turn ensures convergence in finite number of iterations. On the other hand, IHT is slower and may require infinite number of iterations while requiring much smaller computational cost.

Several other algorithms, like compressive sampling matching pursuit(CoSaMP) [9], subspace pursuit(SP) [10], hard thresholding pursuit [11] were proposed to partially overcome the drawbacks of OMP and IHT to result in better convergence behaviour. Of these, HTP is particularly impressive as it is derived by taking the best of both OMP and IHT, and has been shown to have superior recovery performance to CoSaMP and SP [11] and requires much smaller, finite number of iterations for recovery as well [12]. The key to the improved behaviour of HTP is attributed to the fact that at each iteration, it uses a two stage strategy, where in the first identification stage it identifies a support with K indices and then uses it in the following estimation stage to estimate a K-sparse vector that minimizes the least squares cost function with the solution constrained to be on that support. Since the estimation stage ensures that the estimate is one of the (nK) many solutions corresponding to the (nK) possible supports of size K, it plays the principal role in ensuring that the algorithm converges in finite number of steps. However, the fast recovery performance of HTP is also highly dependent upon the quality of the support selected by the identification step, as a sequence of “bad” support selection might lead to delayed recovery.

In this paper we propose a generalization of HTP where where we modify the identification stage by adding an extra gradient term of a regularization function to the gradient of the objective function. We call this method, the regularized HTP (RHTP). Note that if the regularizer function is takes as 0, it becomes the HTP algorithm. This modification was partly motivated by observing the equivalency of the following two problems

as the latter is formed from the former by adding a Lagrange multiplier to the cost function corresponding to the second constraint, where we have assumed that the function J:Rn→R, is decomposable, i.e., J(x)=∑nj=1gj(xj), and that the Lagrange multipliers are {γ1,⋯,γn}. The presence of a regularizer generally corresponds to availability of prior information of the unknown vector to be estimated, and often improves the accuracy of the estimator. For example, the estimator produced by the elastic net (EN) regularizer by Zou and Hastie [13], which uses a convex combination of the Ridge(l22)-regularizer and the l1-regularizer, posses a certain “grouping” effect  [13, Theorem 1], where EN produces nearly equal estimates for a group of the nonzero entries in the support of the true vector if the corresponding columns of the measurement matrix are highly correlated. However, the l1-minimizer alone has been seen to select only one of these columns and discard the others. Thus, using gradient corresponding to a regularized cost function in the identification step, it is hoped that the modified support selection step of the HTP algorithm will be useful in “better” convergence of the algorithm in some way.

We provide a convergence analysis of the RHTP algorithm to find conditions on the measurement matrix as well the regularizer function and certain parameters of the algorithm, under which the algorithm converges. In the process of doing so it is revealed that if the regularizer function is decomposable and if the decomposed functions have certain regularity properties, the sequence generated by the RHTP algorithm is topologically conjugate [14], i.e. is dynamically equivalent, to a transformed sequence which has a HTP-like evolution with the gradient of the identification step premultiplied by a time varying diagonal matrix. Using this alternate HTP-like evoltuion, we show that if the common paramteres of HTP and RHTP are kept the same, the latter enjoys faster convergence speed compared to HTP. We also analyze the number of iterations it takes for RHTP to recover the true support with both noiseless and noisy measurements, and show that RHTP requires less number of iterations compared to HTP to do so. Finally, we corroborate our theoretical findings by performing several numerical experiments.

We first define the notion of equivalence between two dynamical systems, related by mappings, which will be helpful in the analysis later. For this purpose we use the notion of topological conjugacy between two maps generating two dynamics (See Devaney [14, §1.7]). We borrow the definition for topological conjugacy from Devaney [14] and state it as below:

Let A,B be two topological spaces. Two mappings f1:A→A, and f2:B→B are topologically conjugate if there is a homeomorphism h:A→B such that h∘f1=f2∘h.

For two topological spaces A,B equipped with topologies TA, TB, a homeomorphism h:A→B is a mapping such that h is a bijection, and both h and h−1 are continuous. Thus intuitively topological conjugacy between two mappings f1, f2 implies that same dynamics can be represented in two different forms using the maps f1,f2. The importance of topological conjugacy is in the fact that if the maps f1,f2 are topologically conjugate, the properties of the sequence {fn1(x)}n≥0 can be studied by studying only the properties of the sequence {fn2(h(x))}n≥0.

We use the following notations in the sequel:

Furthermore, we require the matrix Φ to satisfy the restricted isometry property (RIP) which, informally, stands for the near unitariness of the columns of the matrix Φ. Till its inception from the seminal paper by Candes and Tao [1], RIP has been used as a standard tool for the analysis of algorithms in the literature of compressed sensing, and has been used predominantly in the analysis of algorithms like HTP, CoSaMP and SP [11, 9, 10].

We will also require the following lemmas in the analysis:

be a real positive definite matrix with maximum and minimum eigenvalues

Moreover, there exists orthonormal pair of vectors x, y∈RL such that the the above inequality is satisfied with equality.

The proof is provided in Appendix A-A. ∎

The proof is provided in Appendix A-B. ∎

The map Ψ:Rn→Rn is a homeomorphism.

The proof is provided in Appendix A-C. ∎

The proof is provided in Appendix A-D. ∎

The RHTP algorithm is described in  Table I.

From the Table I it can be seen that the only difference between RHTP and HTP is that the former has a −Γ∇J(xk) inside the hard thresholding operator in the identification stage. This modification induces the effect of availability of some prior information about the unknown vector in terms of the regularizer J and the factors {γj}nj=1, and thus help select a support which is closer to the true support of the unknown vector, which in turn accelerates the convergence of the algorithm.

If the matrix Φ satisfies RIP of order K, then the mappings χ1 and χ2 are topologically conjugate.

First, that Ψ is a homeomorphism, follows from Lemma 2.4. We now show that Ψ(χ1(x))=χ2(Ψ(x)). First observe that, while obtaining χ1(x), in the intermediate step we calculate the support S1(x), which can be written as

Theorem 4.1 gives us an alternate dynamics furnished by χ2 which we can analyze to understand the convergence behavior of the dynamics governed by χ1. In the sequel we will analyze the sequence {zk}k≥0 instead of the sequence {xk}k≥0 produced by the RHTP algorithm, where zk=Ψ(xk). To further proceed we denote by Λk the support of xk, ∀n≥0, and Tk=Λk+1∖Λk, Uk=Λk+1∩Λk.

If the matrix Φ satisfies RIP of order 2K+1, then at any iteration n(≥1), the iterates xk, zk, and ^xk+1 are upper bounded in the following way:

The proof is supplied in Appendix A-E. ∎

Our first result on the convergence of the sequence {zk}k≥0 is stated as below:

We will now find upper bounds on I1, I2.

To find an upper bound on I2, we proceed as below:

where Gk=miniGk,i. Now, again using the structure of ^xk+1, we obtain,

Now the definition of ^xk+1 implies that